Non-small cell lung cancer (NSCLC) accounts for 85% of all cases of lung cancer, which is the leading cause of cancer deaths worldwide (1-3) despite improvements in the prognosis of metastatic lung cancer due to the development of targeted therapy and immunotherapy (4-6). The stage of lung cancer at diagnosis affects prognosis (7,8), and distant metastasis is found at initial diagnosis with a frequency of approximately 40% (8-10). Additionally, prognosis varies depending on the metastatic sites. Previous studies have shown that metastasis to the liver, bone, and adrenal glands in patients with NSCLC are associated with poor outcomes (11,12).

Until now, there has been no comprehensive analysis of outcomes or clinical characteristics according to both the type of first-line chemotherapy and the presence of liver metastasis in NSCLC patients. Therefore, this study aimed to verify the effects of liver metastasis on the prognosis of stage 4 NSCLC patients according to their first-line treatment using real-world clinical data. We present the following article in accordance with the STROBE reporting checklist (available at http://dx.doi.org/10.21037/tlcr-21-206).

This study was a single-center retrospective real-world data-based study. Patients who were diagnosed with NSCLC from January 2015 to December 2019 were analyzed. The patients had stage 4 cancer with distant metastasis at initial diagnosis and were over 18 years old. The patients’ demographic and baseline clinical data including epidermal growth factor receptor (EGFR), anaplastic lymphoma kinase (ALK), and programmed death-ligand 1 (PD-L1) statuses at the time of diagnosis were collected. All patients received first-line systemic treatment during the analysis period. The patients were divided into three groups depending on the type of first-line chemotherapy they received: cytotoxic, targeted, and immunotherapy. The immunotherapy group included patients who received either immunotherapy alone or the combination of immunotherapy and cytotoxic chemotherapy.

The study was conducted in accordance with the Declaration of Helsinki (as revised in 2013). The study was approved by the institutional review board of Asan Medical Center (IRB No. 2020-0921) and individual consent for this retrospective analysis was waived.

The exclusion criteria were patients with recurrence; patients who were stage 4 at diagnosis but had not undergone chemotherapy; patients with types of cancer other than NSCLC; or patients with other malignancies during the analysis period (Figure 1). 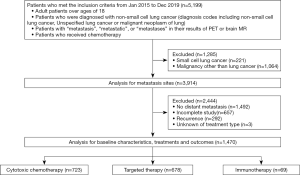 Figure 1 Consort diagram of the study.

The primary outcome was a comparison of overall survival (OS) and progression-free survival (PFS) depending on the presence of liver metastasis in each treatment group, particularly in the immunotherapy group. The secondary outcomes were the distribution of metastatic sites in stage 4 NSCLC, the difference in prognosis according to metastatic sites, and other factors affecting OS and PFS in patients with stage 4 NSCLC.

T-tests were used to compare continuous variables, and Chi-square tests were used to compare categorical variables between two groups with or without liver metastasis. All values were denoted as the mean ± standard deviation or number (percentage). Kaplan-Meier curves and the log-rank test were used to compare OS and PFS. The PFS analysis was based on the Response Evaluation Criteria in Solid Tumors guidelines (version 1.1). We used a Cox regression analysis to obtain the hazard ratio (HR) of each variable for the OS and PFS. A p-value of less than 0.05 was considered statistically significant. The statistical analyses were performed using IBM SPSS version 25.0 (IBM Corp., Armonk, NY, USA).

Baseline characteristics of the study population

During the analysis period, 5,199 patients met the inclusion criteria. A total of 1,470 patients were finally analyzed after excluding 3,729 patients who met the exclusion criteria. Among them, 723 patients received cytotoxic chemotherapy, 678 received targeted therapy, and 69 received immunotherapy as their first-line chemotherapy (Figure 1 and Table 1). In particular, 30 and 39 patients in the immunotherapy group received immunotherapy alone and combination therapy, respectively. Baseline characteristics in each treatment group are presented in Table S1. Of the total population, 234 (15.9%) patients had liver metastasis at the initial diagnosis. Bone accounted for the largest percentage of metastatic sites, followed by the pleura and extra thoracic lymph nodes. A total of 31.4% of patients had a single metastatic site and 68.6% had two or more metastatic sites (Table 2). The mean patient age was 63.7 years, and 59.1% were male. Adenocarcinoma and squamous cell carcinoma comprised 82.9% and 13.2% of the cancers, respectively. The molecular test results at diagnosis showed that 42.9% of patients had EGFR gene mutations and 6.4% had ALK gene rearrangement (Table 1). Additionally, 55% of the patients who received first-line immunotherapy were PD-L1 positive (PD-L1 expression ≥1%) and 18.8% were PD-L1 negative (Table S2). There were no statistical differences in the baseline characteristics between the groups with and without liver metastasis. 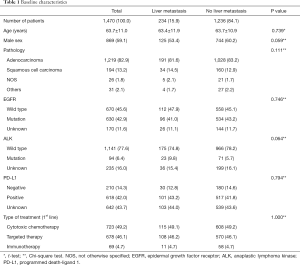 Prognostic differences according to hepatic metastasis 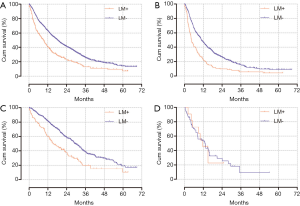 Prognostic differences according to first-line treatment

Prognostic differences according to the number and location of metastatic sites

The prognosis in patients with metastasis occurring at sites other than the liver tended to differ from that of patients with liver metastasis. Within each treatment group, particularly within patients who received immunotherapy, bone, adrenal, or soft tissue metastasis had a significant negative effect on prognosis, unlike liver metastasis. There was no statistical difference in the prognosis of those who received immunotherapy and cytotoxic chemotherapy according to the presence or absence of these types of metastasis (Figure S4). 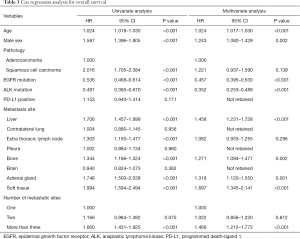 Prior to the use of targeted therapy, liver metastasis had been identified as a factor associated with poor outcomes in NSCLC patients who received cytotoxic chemotherapy (21). The findings are not much different for patients receiving targeted therapy such as TKI. Some studies have reported significantly shorter PFS and OS in NSCLC patients with liver metastasis who receive TKIs as the first-line treatment after confirming the presence of EGFR mutations (14,16). The results of these studies support our findings.

In addition to liver metastasis, soft tissue, adrenal gland, and bone metastases have been confirmed as poor prognostic factors. These findings are similar to the results of previous studies (11,12,27). Although the reason is not yet clear, the HR for the OS of soft tissue metastasis was the highest among all metastatic sites. If cancer cells spread to uncommon sites such as soft tissue, which is usually a difficult site for cancer cells to survive, such cells are likely aggressive and might have already spread to other various organs (27). Interestingly, some metastatic sites including the brain and extra thoracic lymph nodes did not affect prognosis in the multivariate analysis. This might have been caused by the ease of local treatment, such as radiotherapy, on these sites compared with other metastatic sites. Patients with oligo metastatic NSCLC who received local consolidative therapy had significantly better outcomes (28,29). For these metastatic sites, we can consider aggressive local treatment in addition to systemic treatment.

Third, the immunotherapy regime was also heterogeneous and patients with immunotherapy alone and combination therapy were analyzed together. Although, subgroup analysis showed results similar to those of the total immunotherapy group, further study is warranted to compare these subgroups with liver metastasis. In addition, outcomes were compared according to only the type of first-line chemotherapy. The treatment after first-line therapy may have affected the outcome; thus, further analysis according to subsequent treatment is necessary. Tumor burden or performance status, which could affect prognosis, should also be considered in future studies.

The authors would like to thank Enago () for the English language review.

Reporting Checklist: The authors have completed the STROBE reporting checklist. Available at http://dx.doi.org/10.21037/tlcr-21-206

Conflict of Interest: All authors have completed the ICMJE uniform disclosure form (available at http://dx.doi.org/10.21037/tlcr-21-206). The authors have no conflicts of interest to declare.

Ethical Statement: The authors are accountable for all aspects of the work in ensuring that questions related to the accuracy or integrity of any part of the work are appropriately investigated and resolved. The study was conducted in accordance with the Declaration of Helsinki (as revised in 2013). The study was approved by the institutional review board of Asan Medical Center (IRB No. 2020-0921) and individual consent for this retrospective analysis was waived.