While immune checkpoint inhibitors (ICIs) have excellent therapeutic efficacy as a standard treatment for lung cancer and prolong the survival period, the response rate of a single agent is about 20–40% (1-4), and the mechanism is often unclear. To clarify the mechanism underlying the effects of ICIs, it is essential to elucidate the immune response evoked locally in the tumor in detail.

Tumor-infiltrating lymphocytes (TILs) are considered to play a central role in antitumor immune surveillance (6,7). CD8+ T lymphocytes are the major population of T lymphocytes that cause an actual antitumor immune response. CD8+ TILs were reported to be a favorable independent prognostic factor (8,9). CD103, also known as integrin αEβ7 (ITGAE), is a transmembrane heterodimer complex involved in cell-to-cell to matrix interactions (10). CD103 interacts with E-cadherin expressed in epithelial cells and mediates cell adhesion, migration, and cell lymphocyte homing (11). Therefore, CD103 is considered a specific molecule of immune cells that resides within the epithelium of mucosal organs, including the genital tract, stomach, lung, and skin (12-15). CD103+ TILs were also reported as a favorable prognostic factor (16-19). In the present study we analyzed the prognostic effects of molecules expressed on these effector immune cells in patients undergoing surgery for squamous cell lung cancer.

Programmed cell death protein-1 (PD-1) is expressed on the cell surface of T lymphocytes and regulates hyperautoimmune responses . Programmed cell death protein ligand-1 (PD-L1), which is an immune-modulating ligand of PD-1, is expressed on antigen-presenting cells as well as cancer cells. Recently, ICIs were administered to patients with non-small-cell lung cancer (NSCLC) and demonstrated marked efficacy, even for chemotherapy-resistant patients (1,2). Since ICIs block immune checkpoint molecules expressed on cancer cells or immune cells, they can block inhibitory signals from ligands and prolong T lymphocyte activation (20). Therefore, the PD-L1 expression on cancer cells or immune cells is an important factor involved in the antitumor immune response.

An elevated neutrophil-to-lymphocyte ratio (NLR) was reported to be a poor prognostic factor in solid tumors, including NSCLC, according to a high-quality meta-analysis (21). An elevated platelet-to-lymphocyte ratio (PLR) was also shown to be associated with a poor survival in NSCLC patients (22,23). Diem et al. reported that elevated NLR and PLR values before treatment were associated with a poor overall survival (OS), progression-free survival (PFS), and response rate in patients with metastatic NSCLC treated with nivolumab (24). The NLR and PLR are strongly related to the immune status and have been reported as prognostic factors, so they were included in our analysis.

In the present study, we investigated the relationship between clinicopathological factors and the prognosis in 50 squamous cell lung cancer patients undergoing complete resection, with a particular focus on the following points:

From August 2009 to June 2019, 50 patients with lung squamous cell carcinoma who underwent complete resection by lobectomy in our department were included in the analysis. The pathological stage (p-stage) was decided based on the current tumor, node, metastasis (TNM) classification (26). In addition, the NLR and PLR were calculated from preoperative blood sampling data. The relationship between these clinicopathologic factors and the prognosis was retrospectively analyzed.

This analysis was performed based on the Declaration of Helsinki (as reviewed in 2013), and the protocol was approved by Saitama Hospital Ethics Committee (R2019-01). Written informed consent was obtained from all the participants for publication of this study. 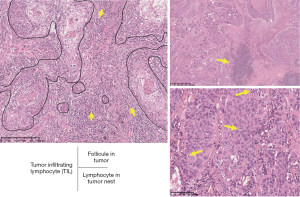 Serial sections from paraffin-embedded tumors were stained with anti-CD8 (SP57), anti-CD103 (Abcam, Cambridge, UK), anti-PD-L1 (SP263), and anti-MHC class I [human leukocyte antigen (HLA)-A,B,C] (D370-3H) (EMR8-5.1) MBL. The Benchmark XT autostainer (Ventana Medical System, Tucson, AZ, USA) was used for IHC. For the evaluation of CD8+ and CD103+ lymphocytes, two pathologists used the same method as for TILs to count the proportion of the tumor stroma area where IHC-positive lymphocytes were present. The analysis was then performed using the median value. CD103+ cells were evaluated separately for lymphocytes that infiltrated the tumor nest (CD103 tumoral), lymphocytes that infiltrated the tumor stroma (CD103 stromal), and lymphocytes that infiltrated both the tumor nest and stroma (CD103 total). Regarding the expression of MHC class I, the ratio of cancer cells expressing MHC class I among the viable cancer cells was used. To evaluate the PD-L1 expression in regional lymph nodes, the proportion of IHC-positive immune cells among the immune cells in the lymph nodes was calculated. The ratio of the area of IHC-positive cancer cells to the total area of viable cancer cells was calculated to evaluate the PD-L1 expression in cancer cells. Regarding the expression of CD103 in the regional lymph nodes, the ratio of IHC-positive lymphocyte cells among the lymphocytes was examined in the same manner (LN CD103 stromal). In cases with regional lymph node metastases, the proportion of CD103+ positive lymphocytes among lymphocytes infiltrating the tumor nests was calculated (LN CD103 tumoral). In 9 cases (18%), metastasis was observed in the regional lymph nodes.

A receiver operating characteristics (ROC) curve analysis was used to determine the cut-off values of the obtained clinicopathological data. The t-test and Pearson’s product-moment correlation coefficient were used to compare the molecular expression. All P values were two-sided. When the P value was <0.05, we regarded it as a significant difference. Statistical analyses were performed with EZR (Saitama Medical Center, Jichi Medical University, Saitama, Japan), which is a graphical user interface for R (The R Foundation for Statistical Computing, Vienna, Austria). More precisely, it is a modified version of R commander designed to add statistical functions frequently used in biostatistics (27). 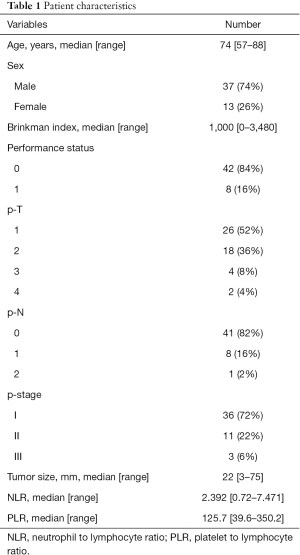 The data obtained by the pathological evaluation are shown in Table 2. The sensitivity and specificity were calculated from the ROC curve, and the cut-off was decided (Table 3). 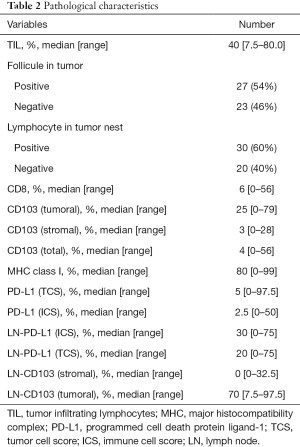 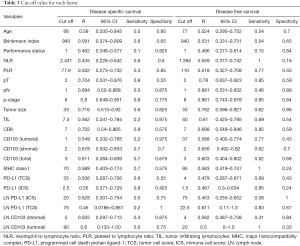 The relationship between the DSS and the expression of each molecule is shown in Figure 3A. Tumor-infiltrating lymphocytes and CD8+ lymphocytes, intratumoral and intrastromal CD103+ lymphocytes, the tumor diameter, pathological T (pT), pathological (pN) factor, and the p-stage were significant prognostic factors in the univariate analysis (Table 4). In the multivariate analysis, intratumoral and intrastromal CD103+ lymphocytes and pT and pN factors were independent prognostic factors (Table 4). 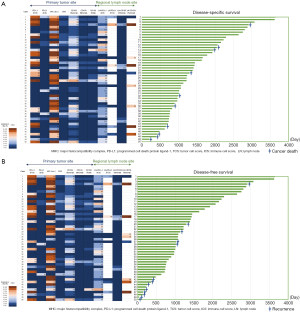 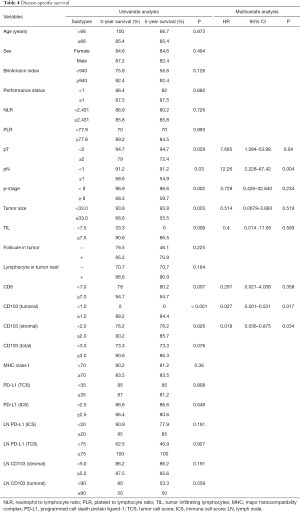 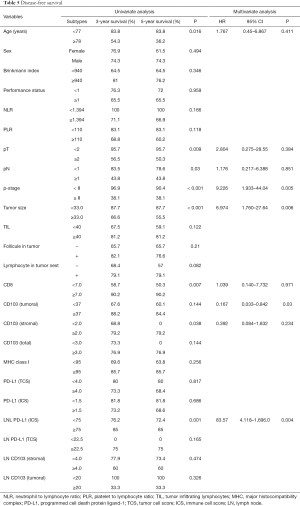 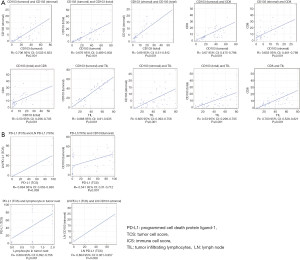 The prognosis is reportedly good in cases in which T lymphocytes locally infiltrate lung cancer (6). Among T lymphocytes, CD8 T lymphocytes play a central role in killing cancer cells and thus can be sensitive biomarkers. CD8, as we have previously reported, is an essential molecule allowing CTLs to act as effector cells and eliminate cancer cells (29). CD103 is a ligand of E-cadherin, which is an adhesion molecule. CD103+ lymphocytes are cancer-specific lymphocytes, and CD103+ lymphocytes presenting at the tumor site were reported to be a favorable prognostic factor in breast cancer (17). CD103 is mostly expressed in solid tumors but is also expressed by subsets of CD4+ T lymphocytes, natural killer (NK) cells, and dendritic cells. CD103 on T lymphocytes is upregulated by both antigen stimulation and transforming growth factor (TGF)-β signaling. CD103 may be a marker for antigen-educated effector T lymphocytes present in tissues (30,31). CD103+ T lymphocytes appear to be characterized by a lower proliferative potential and higher cytokine production capacity than CD103- T lymphocytes (32), and CD103 is involved in functional interactions between T cells and epithelial tumor cells (13,33,34). Webb et al. reported that CD103+CD8+ TILs have a higher expression of activation markers HLA-DR, PD-1, and Ki-67 and lower expression of the naïve T cell marker CD127 than do CD103− ones (35). In addition, all CD103+ TILs express T-cell intracytoplasmic antigen-1 (TIA-1), a marker of cytolytic potential shown to be a strong prognostic factor in epithelial ovarian cancer (36) and breast cancer (37). There is a strong association between CD103+ TILs and the patient survival. CD103+ TILs are a subset of cytotoxic CD8+ TILs that become highly activated by universally expressing TIA-1. Piet et al. reported that most CD103+ CD8+ T lymphocytes were able to more quickly upregulate cytotoxic mediators than CD103− CD8+ T lymphocytes when they were exposed to their specific antigens upon infection. This allows for a rapid and adequate immune response (38).

PD-L1, which was known as B7 homolog 1 (B7-H1) and CD274, was first discovered in 1999 and is located on chromosome 9p24.1. PD-L1 is a member of the CD28+ cytotoxic T lymphocyte-associated protein 4 (CTLA-4) receptor subfamily and is an extremely important costimulatory molecule in the immune response, leading to the induction of immune tolerance in the tumor microenvironment (39). PD-L1 is widely expressed on immune cells as well as various cancer cells (40). PD-1, which is a PD-L1 receptor, is also widely expressed on TILs, B lymphocytes, NK cells, monocytes, and dendritic cells. PD-1/PD-L1 is a representative immune checkpoint molecule. PD-L1 has been clinically applied as a predictor of the effect of ICIs but often does not reflect the actual effect of ICIs. In addition, the PD-L1 expression is markedly influenced by the environment around the cells, with strong heterogeneity, so many aspects of its function are unclear.

These findings may facilitate the development of more effective immunotherapy. In addition, in the current surgical treatment, all regional lymph nodes were removed in order to eliminate metastatic lesions. However, if an important reaction inducing an effective cancer immune response within regional lymph nodes without lymph node metastasis were to be found, it might be acceptable to consider not resecting the lymph nodes in the future, as ICIs are extremely effective (55).

This study was limited by its inclusion of old surgical specimens from 2009 and the fact that the analysis evaluated 50 cases (with only 9 cases having regional lymph node metastases). A patient with a 16-day observation period died suddenly from another illness at home.

In the present study, the following points became clear:

In this study, we analyzed the expression of immune-related molecules in the primary tumors and regional lymph nodes of patients who underwent resection of squamous cell lung cancer, and the prognosis was particularly good for those with a large amount of CD103+ TILs. The efficacy of ICIs may be expected in cases with marked tumor infiltration of CD103+ lymphocytes.

Reporting Checklist: The authors have completed the REMARK reporting checklist. Available at https://dx.doi.org/10.21037/tlcr-21-479

Conflicts of Interest: All authors have completed the ICMJE uniform disclosure form (available at https://dx.doi.org/10.21037/tlcr-21-479). The authors have no conflicts of interest to declare.

Ethical Statement: The authors are accountable for all aspects of the work in ensuring that questions related to the accuracy or integrity of any part of the work are appropriately investigated and resolved. This analysis was performed based on the Declaration of Helsinki (as reviewed in 2013), and the protocol was approved by Saitama Hospital Ethics Committee (R2019-01). Written informed consent was obtained from all the participants for publication of this study.