Using real-world data, this study aimed to propose a classification system based on the time course of tumor lesion changes and routine clinical examinations in osimertinib treatment of EGFR-mutant advanced NSCLC and to evaluate the role of this classification method in predicting treatment effect and progression after resistance. We present the following article in accordance with the STROBE reporting checklist (available at https://tlcr.amegroups.com/article/view/10.21037/tlcr-22-315/rc).

A total of 1,125 patients with lung cancer who attended the Affiliated Cancer Hospital of Nanjing Medical University were screened from April 1, 2017 to December 31, 2018, and 117 advanced NSCLC cases with EGFR-positive mutation who had been treated with osimertinib were collected and analyzed. Patients included in the study met the following criteria: (I) over 18 years old; (II) pathologically confirmed as stage IIIB or IV NSCLC; (III) with an Eastern Cooperative Oncology Group (ECOG) score of 0 to 2; (IV) without any serious underlying diseases such as dysfunction of heart, kidney, and liver; (V) with positive EGFR Exon20 T790M mutations.

The clinical characteristics, including gender, age, treatment lines, smoking history, metastases, and the number and site of the metastases outside the primary lesion, were recorded and collected. The number of patients who met the enrollment criteria in this study determined the sample size.

The study was conducted in accordance with the Declaration of Helsinki (as revised in 2013). This study was approved by the Ethics Committee of Nanjing Medical University (No. 538), and all participants signed an informed consent form.

The efficacy of osimertinib was evaluated every 4 to 6 weeks according to the 4 categories of RECIST1.1: PD, stable disease (SD), partial response (PR), and complete response (CR). PFS was defined as the time from the patient’s first use of osimertinib to tumor progression or death. The time interval between each efficacy evaluation was adjusted according to clinical reality and some new or anabatic symptoms such as pain or stuffiness. The primary end point was PFS.

The head, chest, and abdomen of the patients were examined by computed tomography (CT; normal scan + enhanced scan) imaging every 4 to 6 weeks in the radiology department of the Affiliated Cancer Hospital of Nanjing Medical University. To reduce potential bias, all image data were interpreted by at least 2 senior professional radiologists and 2 senior professional oncologists to determine whether the target lesion was enlarged, whether there were new lesions, and whether the patient’s condition had progressed. The patients who experienced PD were divided into a ‘Rapid Type’ and a ‘Delayed Type’ group according to the course of the progression. The ‘Rapid Type’ group included 2 progression models, ‘Rapid Enlargement’ and ‘Rapid New Lesion’, and the ‘Delayed Type’ included 3 progression models, ‘Delayed Enlargement’, ‘Delayed New Lesion’, and ‘Non-target Enlargement’. The definition of each subgroup is shown in detail below (Figure 1). 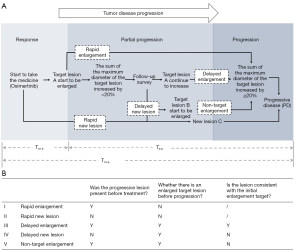 The categorical variables in this study were gender, treatment lines, smoking history, metastases, the number and site of the metastases outside the primary lesion, and the classification of progression models, which were expressed as frequencies with constituent ratios and analyzed by chi-square test. The quantitative variables were age, PFS, and the 3 time intervals, which were analyzed and compared by Kaplan-Meier method and log-rank test, t-test, and linear regression. All analyses used a two-tailed P value of <0.05 as the criteria for statistical significance.

The classification of progression models 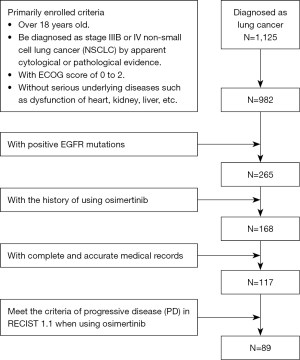 By the end of the study, 89 of the 117 patients stopped osimertinib due to PD, with a longest treatment duration of 43.17 months and an overall median PFS of 15.233 months (95% CI: 12.352–18.114 months; Figure 4A). A total of 71 patients (79.78% of all patients with PD) had partial lesion enlargement on imaging before meeting the standard of PD. The mean Tm-e was 6.59 months after starting osimertinib, and the median Tm-e was 5.47 months. The earliest onset of target lesion enlargement was 0.17 months after using osimertinib and the latest was 24.67 months. 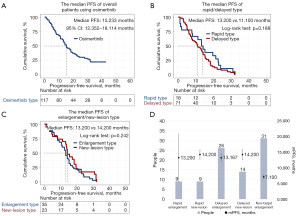 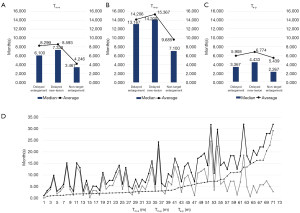 Correlation of Tm-e, Tm-p, and Te-p of different progression models 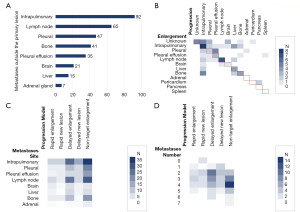 Characteristics of the progression models

The basic characteristics of the 5 progression types were analyzed (Table 6), and no significant difference was found in the proportions of gender, age, or treatment lines. The proportion of patients with a history of smoking in the ‘Delayed Enlargement’ (11.54%) and ‘Non-target Enlargement’ (25.81%) progression models was higher than that in the other models, and the difference was statistically significant (P=0.046, P<0.05).

Different progression models also showed significant differences in enlarged lesions (P=0.003, P<0.05) and progressive lesions (P=0.002, P<0.05). Both enlarged and progressive lesions were mainly intrapulmonary metastases. Brain metastasis was more common in patients with the ‘Rapid Enlargement’ model than in those with other models, while patients with the ‘Delayed Enlargement’ model mainly had lung metastasis and lymph node metastasis, followed by liver metastasis and bone metastasis. In patients whose progressive model was ‘Non-target Enlargement’, the enlargement of adrenal (18.75%) and pleural metastases (25.00%) was common, and patients were more likely to discontinue treatment due to increased pleural effusion of exfoliated cells than due to extrapulmonary metastasis (25.81%; Figure 7). 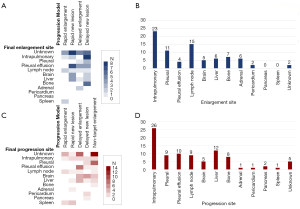 This study demonstrated that the failure of third-generation EGFR-TKI treatment can be divided into five models according to the time course of the tumor progression. These models are as follows: (I) rapid enlargement; (II) rapid new lesion; (III) delayed enlargement; (IV) delayed new lesion; and (V) non-target enlargement. Previous studies on the progression pattern of first-generation EGFR-TKIs found that it was reasonable to continue using the current EGFR-TKI combined with systemic chemotherapy even if the disease had partially progressed (21,24-26). Whether a similar principle can be applied to third-generation EGFR-TKIs remains to be explored. In this study, the results showed that the prognosis of patients with a ‘New Lesion Type’ model was better than that of patients with an ‘Enlargement Type’ model. There was no significant difference in prognosis between the ‘Rapid Type’ and ‘Delayed Type’ groups, although the limited sample size and the difficulty in controlling the follow-up time may be the reason for this. What’s more, the patients with missing follow-up data mostly due to rapid progression would have bias to decrease the data of rapid type. Among the 5 progression models, the ‘Non-target Enlargement’ model had the worst prognosis with the shortest duration of disease control, the median PFS of which was only about half that of the other 4 progression models. The difference in time course mainly occurred in the time interval between the start of osimertinib treatment and the time that the lesions first began to enlarge (Tm-e), which was the key means of differentiation between the models. Once the target lesions began to increase, the progression models all followed a similar time course to the PD treatment endpoint, and no significant difference was found. Whether similar progression processes are common in other EGFR-TKI therapies and their underlying mechanisms remains to be confirmed.

The five progression models in this study showed no significant differences in gender, age, or treatment line. In terms of smoking, the patients with a long-term history of smoking were more likely to experience ‘Non-target Enlargement’ or ‘Delayed Enlargement’ progression. In terms of target lesions, the location and number of metastatic lesions outside the primary lesions before treatment had no significant effect on the progression models. It is possible that patients in the ‘Enlargement Type’ models had more lymph node metastases, and that the ‘Non-target Enlargement’ model had more extensive initial areas of metastases, but more statistical evidence is needed to prove the impact of metastatic site, smoking history, and other factors on classification In terms of enlarged and progressive lesions, different progression models showed different tendencies. Brain metastasis was more common in the ‘Rapid Enlargement’ model than in the other 4 models, while the ‘Delayed Enlargement’ model mainly involved lung metastasis and lymph node metastasis. In the ‘Non-target Enlargement’ model, adrenal and pleural metastases appeared to enlarge first, and it was more common for patients to stop treatment due to an increase of pleural effusion caused by exfoliated tumor cells than due to extrapulmonary metastases. In terms of the target lesion itself, different locations of metastases outside the primary lesion led to differences in the site of the first enlarged lesions and the final progressive lesions.

Three time intervals, Tm-e, Te-p, and Tm-p, were used to analyze the data. Statistical analysis showed that either Tm-e or Te-p was correlated with Tm-p, while there was no obvious correlation between Tm-e and Te-p, both of which were independent variables. The progression models did not affect the length of Te-p but had a profound effect on Tm-e and thus on Tm-p, which affected the duration of overall disease control. Tm-e was particularly helpful in predicting the progression model and overall prognosis.

This study had the following limitations. The retrospective research used convenience sampling rather than random sampling. The follow-up time was short and limited by the difficulty of following up an oral drug, and OS was not included in the research analysis. Moreover, the chosen samples were concentrated in Nanjing, and the narrow population sample may have affected the accuracy of the results.

In conclusion, we tried to create a classification system for the failure of third-generation EGFR-TKI drug resistance treatment that consisted of five progression models and two tumor progression stages based on the time course of the tumor progression. The use of these models and stages could be of a bit benefit to the prediction of overall prognosis and could be potential to assist the selection of subsequent treatment strategies. Further research on the potential molecular mechanisms of drug resistance is necessary to clarify the mechanism of the failure of third-generation EGFR-TKIs in patients with EGFR-mutant advanced NSCLC. In addition, in order to have more robust results, more studies to enlarge the sample size, to increase additional study centers, and to evaluate the progression to Osimertinib when given in first-line setting are also of great significance.

The authors appreciate the academic support from the AME Lung Cancer Collaborative Group.

Reporting Checklist: The authors have completed the STROBE reporting checklist. Available at https://tlcr.amegroups.com/article/view/10.21037/tlcr-22-315/rc

Ethical Statement: The authors are accountable for all aspects of the work in ensuring that questions related to the accuracy or integrity of any part of the work are appropriately investigated and resolved. The study was conducted in accordance with the Declaration of Helsinki (as revised in 2013). This study was approved by the Ethics Committee of Nanjing Medical University (No. 538), and all participants signed an informed consent form.