A new N descriptor for non-small cell lung cancer: the classification based on anatomic location, number and ratio of metastatic lymph nodes

Lung cancer is considered one of the most prevalent cancers worldwide, with non-small cell lung cancer (NSCLC) accounting for about 85% of all lung cancer cases (1,2). The average 5-year survival rate for NSCLC has only grown a little in the past few decades, indicating that reliable diagnostic and treatment strategies still have a long way to go (3). Appropriately assessing the tumor stage is vital to choose the optimal treatment strategy and anticipate the clinical outcomes of NSCLC patients. The International Association for the Study of Lung Cancer (IASLC) has proposed the tumor, node, metastasis (TNM) classification to evaluate the tumor stage and the 8th edition was released in 2015 (4). The T and M categories have been updated in comparison to the 7th edition, whereas the N classification has remained unchanged and is solely based on the anatomical location of metastatic lymph nodes (5). Several investigations have indicated that some limitations still exist in the N classification of the 8th TNM staging system. The clinical outcomes of patients stratified by the N classification tended to overlap, especially among those in N1 and N2 categories (6-9). Due to the inability of the N classification in predicting the prognosis of NSCLC patients, it is significant to update the current N classification and develop a more accurate N classification.

The goal of this study was to assess the prognostic accuracy and reliability of the existing N classification and the N-new classification, which may give new evidence and suggestions for the modification of the 9th TNM classification, based on a cohort with a significant number of N1 and N2 NSCLC patients. We present the following article in accordance with the STROBE reporting checklist (available at https://tlcr.amegroups.com/article/view/10.21037/tlcr-21-933/rc).

We screened for patients with N1 or N2 NSCLC from the 2004 to 2015 Surveillance, Epidemiology, and End Results (SEER) database. The data were consisted of deidentified patient-level information, with deidentified patients’ names and hospitals. Because SEER is a database available for the public, the ethical approval has been already finished by the committee of SEER database and additional ethical approval was not required. Our study is a retrospective study and individual consent for this retrospective analysis was waived. We excluded patients without comprehensive data of age, race, sex, primary site, tumor grade, laterality, histological type, surgical site, tumor size, the number of examined lymph nodes and the number of positive lymph nodes. Although the clinical guidelines recommend the patients undergo chemotherapy or radiotherapy in addition to the operation, we have excluded patients receiving chemotherapy or radiotherapy because of the data did not differentiate chemotherapy and radiotherapy implemented before or after the surgery. Due to chemotherapy and radiotherapy could downstage the lymph node stage, we believed that exclusion of all patients who received chemotherapy or radiotherapy was appropriate. Because the database only provided the number of resected lymph nodes as less than four and the other, we excluded patients with less than four resected lymph nodes, which met the criteria of TNM guidelines as much as possible (15,16). The detailed inclusion and exclusion criteria were presented in Figure 1. The study was conducted in accordance with the Declaration of Helsinki (as revised in 2013). 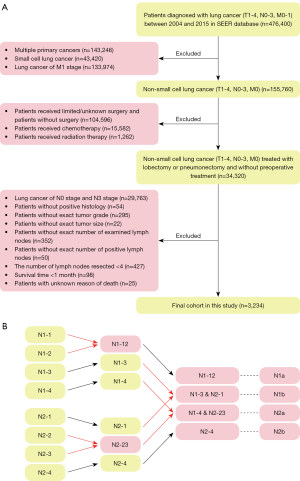 Figure 1 The flow diagram of this study (A) and the N-new classification (B). SEER, Surveillance, Epidemiology, and End Results.

We have enrolled eligible patients with exact information of age, race, sex, primary site, tumor grade, laterality, histological type, surgical site, tumor size, examined lymph nodes’ number and positive lymph node’s number, the use of chemotherapy and radiotherapy, survival time, survival status and cause of death in the SEER database. We aimed to stratify NSCLC patients into subgroups with different prognoses, so we used the X-tile software (version 3.6.1) to determine the optimal cut-off value (Figure S1). We first subdivided patients into N1 and N2 subgroups according to the N-stage classification. Next, we found that the optimal cut-off value was 0.21 for N-ratio and 4 for the N-num. N-ratio-low referred that the ratio of lymph nodes was less than 0.21, while N-ratio-high referred to the other. N-num-low referred to the N-num was less than four, while N-num-high was the other. Then in N1 and N2 we divided patients into four subgroups according to the combination of the above two categories: group-1 (N-num-low, N-ratio-low), group-2 (N-num-high, N-ratio-low), group-3 (N-num-low, N-ratio-high) and group-4 (N-num-high, N-ratio-high). Finally, the above four subgroups were subsequently divided in the N1 (N1-1, N1-2, N1-3 and N1-4) and N2 (N2-1, N2-2, N2-3 and N2-4) patients. We used cancer-specific survival as the clinical outcome in the present study. And the cancer-specific survival time was defined as the time from the date of diagnosis to the date of last follow-up or death from lung cancer.

The validation of N-new classification

The t-test and Mann-Whitney U test were performed to compare the differences between continuous variables with normal distribution and continuous variables with non-normal distribution, respectively. The Chi-square test was used to compare the differences between categorical variables. The log-rank test and Kaplan-Meier method were applied to evaluate the differences among the cancer-specific survival of different subgroups. The univariable Cox regression analysis was performed to identify baseline characteristics with a prognostic impact. And the characteristic with a P value <0.05 was subsequently used in the multivariable Cox regression analysis. N-stage classification and N-new classification were introduced to different multivariable Cox regression analyses, respectively. Overall survival was defined as the time from treatment to death, while cancer-specific survival was defined as the time from treatment to death due to lung cancer. We validated the proportional hazard assumptions according to the results of Schoenfeld residual plots and log-log plots. Akaike information criterion (AIC), Harrell concordance index (C-index) and time-dependent receiver operating characteristic (ROC) curves were applied to analyze whether the multivariable Cox regression models performed well. The “compareC” R package and the “compare” function of the “timeROC” R package were used to evaluate the statistical difference between these two models. We analyzed the standardized net benefit of the N-new classification in predicting clinical outcomes via the decision curve analysis (DCA), which was performed using the R package “stdca”. P<0.05 was considered statistically significant and two-sided statistical tests were performed in this study based on R software (version 4.0.4, http://www.R-project.org).

Baseline characteristics according to N-stage

Only one patient with N1 stage was recorded as “Not_paired_site” for “Laterality” in the database, which was not presented in the table. NA, not applicable; NOS, not otherwise specified; IQR, interquartile range. 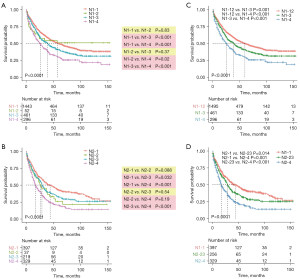 The survival significance of the N-new classification 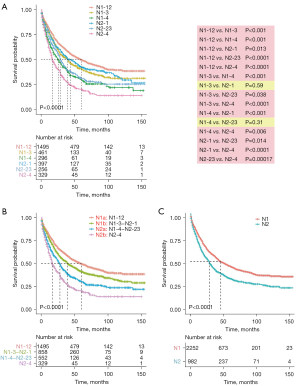 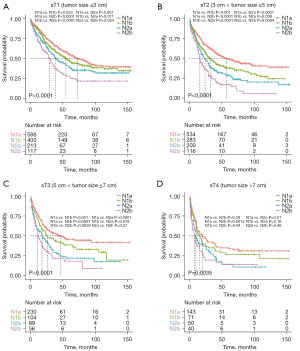 The predictive efficacy of N-new classification

Comparison of the univariable and multivariable analyses in all patients

In addition to the 8th edition of the TNM classification, a recent study found that the N-num had a substantial impact on the clinical outcomes of NSCLC patients, suggesting that N-num might be considered a possible prognostic indicator (7). Fukui et al. (18) have revealed that elevated N-num was closely related to poor prognosis and may represent the better prognoses of skip or single-station nodal metastases. Furthermore, Chen et al. (12) also demonstrated that the N-ratio could be used as an independent prognostic factor, which is especially effective in the N1 NSCLC patients (19). However, according to the results of the ROC curves, the differences in AUCs between N-ratio and current N staging were not statistically significant, indicating that N-ratio was not adequate for the only classification of NSCLC patients (19). And the current N classification still has its value and has been used as a criterion for a long time. Thus, the current N classification is included in the N-new classification. In this work, we created the N-new classification by combining the existing N classification, N-num, and N-ratio, and assessed its accuracy and reliability using a large population-based cohort. We specifically focused on N1 and N2 NSCLC patients because of the existing N classification’s poor performance in classifying prognostically heterogenous N1 and N2 patients. We initially determined the optimal cut-off value of N-num and N-ratio based on the cancer-specific survival of NSCLC patients. Next, based on the combinations of the N-num and N-ratio, we stratified N1 and N2 patients into four different subgroups, respectively (N1-1/2/3/4, N2-1/2/3/4). The results revealed that the difference in the survival curves of N1-1 and N1-2 was the least significant in N1 patients, whereas the difference in the survival curves of N2-2 and N2-3 was the least significant in N2 patients. We subsequently integrated the aforementioned two pairs of subgroups and discovered the survival curves in N1 and N2 subgroups were widely distributed, suggesting the N1 and N2 subgroups were prognostically heterogenous and the combination of N-num & N-ratio functioned well.

Despite the fact that the N-new classification performed well in stratifying heterogenous N1 and N2 patients, some limitations still existed in our study. First, although the patients were from a real-world and population-based cohort, our study was retrospective and may be restricted by the single database. The multi-center prospective studies may be helpful to validate our results in the future. Second, certain SEER database data, like as the number of resected lymph nodes, was incomplete. The database made no distinction between nodal fragments and entire lymph nodes. So patients may not be classified precisely and the number of the removal lymph nodes may be estimated, resulting in bias in the study. Besides, the SEER database lacked adequate information of the resected lymph nodes, and Maeshima et al. (24) found that insufficient examination of lymph nodes in some important stations may lead to a potential weakness. Moreover, we excluded individuals who received chemotherapy and radiotherapy because the SEER database could not differentiate therapy implemented before or after the surgery. As a result, we were unable to assess the new classification’s effectiveness in patients undergoing chemotherapy or radiation. Third, we validated the N-new classification in subgroups determined by a variety of clinical characteristics, revealing that some characteristics may be considered for future revision of the N-new classification. Fourth, we used detailed characteristics of the lymph nodes and some information can be only obtained after the surgery. Only patients who had a procedure with systematic mediastinal lymphadenectomy and no neoadjuvant therapy were eligible for the N-new classification.

We thank the SEER tumor registries for providing open access to the database.

Funding: The study was funded by Institutional Fundamental Research Funds (No. 2018PT32033) and the Ministry of Education Innovation Team Development Project (No. IRT-17R10).

Reporting Checklist: The authors have completed the STROBE reporting checklist. Available at https://tlcr.amegroups.com/article/view/10.21037/tlcr-21-933/rc

Conflicts of Interest: All authors have completed the ICMJE uniform disclosure form (available at https://tlcr.amegroups.com/article/view/10.21037/tlcr-21-933/coif). The authors have no conflicts of interest to declare.

Ethical Statement: The authors are accountable for all aspects of the work in ensuring that questions related to the accuracy or integrity of any part of the work are appropriately investigated and resolved. The study was conducted in accordance with the Declaration of Helsinki (as revised in 2013).