In addition to circulating tumor DNA (ctDNA)-directed liquid biopsy assays in cancer patients, combination of ctDNA with other liquid biopsy analysis detectable in the blood of lung cancer patients, such as circulating tumor cells, extracellular vesicles, miRNAs, or proteins, may permit the development of composite biomarker tests (1). The KISS1 gene encodes KISS1, a protein processed in serum into active smaller peptides, named kisspeptins (KPs), which have been reported to exhibit anti-metastatic function in melanoma, as well in other primary malignancies. However, a tumor promoter function has also been reported, based on several elements, such as the absence or presence of other signaling molecules that might facilitate suppressor or promoter cancer pathways (2). Corno and Perego (3) have reviewed the role of KISS1 as a metastasis suppressor in regulation of metastasis and response to antitumor agents. Loss of reduced KISS1 expression is partly due to the relation of promoter hypermethylation in the development of metastasis in several types of cancer. Nevertheless, controversial findings have surfaced, showing that KISS signaling leads to cisplatin resistance in triple breast cancer, and cisplatin apoptosis in head and neck squamous cell carcinoma [see Fig. 3 in Como, Perego. Drug Resistance Updates 2019 (3)]. In this issue of Translational Lung Cancer Research, Perego and colleagues (4) communicate the presence of KISS1-derived peptide levels in liquid biopsies from 60 non-small cell lung cancer (NSCLC) patients examined by ELISA assay. The KISS1 levels in serum were increased in NSCLC patients compared to healthy donors. In addition, KISS1 mRNA levels increased in cancer cell lines treated with azacitidine and cisplatin, suggesting that KISS1-derived peptides could predict response to cancer therapy and become a biomarker in NSCLC (4). However, disparities in KISS1 protein levels have been found in other studies where they are higher in normal tissue rather than NSCLC tissue, but in general, elevated KISS1 expression is associated with better prognosis (5).

KISS1 was first described as a metastasis suppressor gene in melanoma. KISS1 encodes a precursor peptide of 145 amino-acids, which is processed by proteolytic cleavage into shorter peptides, KPs, KP-10, KP-13, KP-14, and KP-54 (metastin). KPs bind to G-protein-coupled receptor 54 (GPR54), also called KISS-1R, that activates the G-Proteins Gαq/11 (6) (Figure 1). GPR54 is highly distributed in the pancreas, placenta, pituitary gland, and spinal cord. It is relatively abundant in the hypothalamus, limbic system, and basal ganglia, as well as in the spleen, peripheral blood leukocytes, testis, and lymph node (7). In the hypothalamus, KISS1/GPR54 is coupled to Gαq/11, which activates phospholipase C (PLC) and leads to the hydrolysis of phosphatidylinositol-4, 5-bisphosphate. This, in turn, results in the production of inositol-1,4,5-trisphosphate (IP3) and diacylglycerol (DAG) that act as two different potential “second messengers”. IP3 can contribute to the increase in intracellular Ca2+. DAG3 leads to the activation of protein kinase C (PKC), extracellular signal-regulated kinases 1/2 (ERK1/2) and p38 phosphorylation (Figure 1). β-arrestin 1 and 2, can promote activation or inhibition of ERK1/2, respectively (5) (Figure 1). KISS1 plays an essential role in inhibiting insulin secretion in mice liver. When the blood glucose level is downregulated in the body, the secretion of glucagon is increased, acting upon the glucagon receptor in the liver. The cyclic adenosine 3',5'-monophosphate (cAMP)-PKA-cAMP response element-binding protein (CREB) is triggered and the transcription of KISS1 gene is activated, resulting in suppression of insulin secretion (7) (Figure 1). Interestingly, activation of Gs-coupled receptors by epinephrine or glucagon stimulation increases large tumor suppressor Kinase 1/2 (LATS1/2), inhibiting Yes Associated Protein (YAP) function in the Hippo pathway (8). In contrast, activation of Gαq/11-coupled receptors by lysophosphatidic acid (LPA) or sphingosine 1-phosphatase (SIP) inhibits LATS1/2 kinases, resulting in YAP activation (8). Therefore, it is tempting to posit that KPs, through activating G proteins Gαq/11, could activate YAP and YAP target genes, such as CYR61, TGF, and angiomotin like 2 (AMOTL2) (Figure 1). Of interest is the fact that different roles of the Hippo-YAP pathways are mediated by different G-protein-coupled receptors and their corresponding extracellular ligands (8). 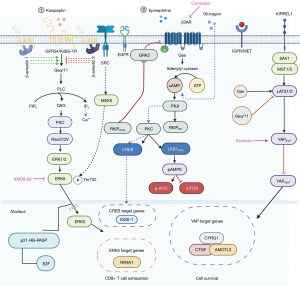 Figure 1 Schematic depicting of downstream signaling effectors in KISS-1/GPR54 and β2-adrenergic receptor pathways following activation by extracellular ligands, such as kisspeptin neuropeptides and norepinephrine that are related to psychological stress. Different classes of G-protein-coupled receptors can activate or inhibit LATS1/2 in the Hippo tumor suppressor pathway. Detailed explanation is provided throughout the text, as well as the definition of the abbreviations of genes and proteins. Figure created in Biorender.com.

NE activated β2-adrenergic receptors in EGFR-mutant NSCLC cells, such as H3255 or HCC827, with 1 or 10 µM NE for 24 hours and IL-6 secretion by enzyme-linked immunosorbent assay (ELISA) was significantly increased. High IL-6 levels in NSCLC patients were also associated with worse progression-frees survival. Smokers have higher concentrations of IL-6 than nonsmokers (10). In addition, IL-6 mRNA expression was increased after NE (10 µM) stimulation for three hours. Propranolol (B-AR inhibitor) blocked NE-induced IL-6. β2-adrenergic receptor activated cAMP signaling pathway through stimulation of adenylyl cyclase (Figure 1). It is plausible that the activation of Gs-coupled receptors by epinephrine stimulation increases LATS1/2 kinase activity, inhibiting YAP function as above commented (8) by phosphorylation of YAP at Ser 127 (18). Forskolin is an activator of adenylyl cyclase that results in increased cAMP production and YAP phosphorylation (8). Forskolin has also been seen to increase IL-6 similar to that induced by NE (10). Moreover, NE induced via PKC LKB1 Ser 248 phosphorylation, a modification that inhibits LKB1 function (10) (Figure 1). Furthermore, phosphorylation of Raf kinase inhibitory protein (RKIP) at Ser 153 by PKC triggers a switch from inhibition of Raf to inhibition of the G protein coupled receptor kinase 2 (GRK2), enhancing signaling by β-adrenergic receptor that activates PKA (19) (Figure 1). It is tempting to posit that the inhibition of GRK2 by RKIP2 can enhance KISS1/GPR54 since GRK2 has been reported to promote KISS1/GPR54 internalization via clathrin-coated pits (6). The new data shows that RKIP phosphorylated at Ser 153 by PKC inhibits GRK2, reducing down-regulation of the β-adrenergic receptor. β-adrenergic receptor, in turn, activates PKA, which then phosphorylates RKIP at Ser 51, leading to increased phosphorylation by PKC at Ser 153 (19) (Figure 1).

Therefore, activation of Gs-coupled receptors by epinephrine could maintain the Hippo pathway and YAP cytoplasmic retention while KPs could activate the YAP pathway via Gαq/11 coupled receptors that inhibit LATS1/2 kinases. The interplay of both neurotransmitters, epinephrine/NE and KPs, warrants further investigation as part of biopsy liquid analytes and investigation in cancer cell lines (Figure 1). The report by Gatti et al. (4) illuminates the need for further integrative studies to decipher the complex interplay between different signaling pathways.

It has recently been seen that a cell surface tumor suppressor, KIRREL 1, is involved in the Hippo pathway binding directly to Salvador 1 (SAV1) upstream of LATS1/2 (20,21) (Figure 1). A previous study using CRISPR screen in 3D cancer model identified KIRREL as a cancer driver in H23 (KRAS-mutant) and H1975 (EGFR-mutant) cells (22).

Provenance and Peer Review: This article was commissioned by the editorial office, Translational Lung Cancer Research. The article did not undergo external peer review.

Conflicts of Interest: All authors have completed the ICMJE uniform disclosure form (available at https://tlcr.amegroups.com/article/view/10.21037/tlcr-22-494/coif). RR serves as an Editor-in-Chief of Translational Lung Cancer Research. The other authors have no conflicts of interest to declare.