Small cell lung cancer (SCLC) is one of the most aggressive type of lung cancer accounting for approximately 15% of thoracic malignancies (1-3). Although early diagnosis and the therapeutic regimens for SCLC have improved in the past 4 decades, improvement in overall survival (OS) remains rather poor (4-7). Previously published studies have demonstrated that patients with untreated limited and extensive SCLC (LD-SCLC and ED-SCLC) have an OS of about 6 and 2 months, respectively, and more than 80% of the patients undergoing standard therapies died within 2 years after diagnosis (8,9). For early-stage SCLC, particularly with no regional lymph node involvement, surgery combined with chemotherapy was the standard therapeutic regimen, and was found to significantly prolong OS (10-12). At the time of diagnosis, more than one third of patients who developed hilar and/or mediastinal lymph node (N1 and N2) involvement, which was defined as locally advanced SCLC (LA-SCLC) (13-15). Because of high recurrence and low OS rates for surgical treated LA-SCLC, surgery has been excluded from potential multimodality regimens since the 1990s (16-18). Current multimodality regimens based on surgery, chemotherapy, targeted therapy, immune checkpoint inhibitors (ICIs), and anti-angiogenic inhibitors (AAIs) have offered positive outcomes in the treatment of stage IIIA SCLC (IIIA-SCLC) disease, according to the TNM staging system for lung cancer (19-24). However, the therapeutic regimen for IIIA-SCLC is still controversial. A number of randomized clinical trials (RCT) on resectable stage I–IIIA SCLC have been carried out to analyze the efficacy of surgery combined with induction therapies (18,25).

The aim of the present study was to analyze the efficacy of intentional radical resection in combination with chemotherapy for IIIA-SCLC patients, and to explore the potentially optimal surgical procedures and adjuvant therapeutic regimens. We present the following article in accordance with the STROBE reporting checklist (available at https://tlcr.amegroups.com/article/view/10.21037/tlcr-22-545/rc).

From January 2004 to December 2015, we reviewed patients diagnosed with IIIA-SCLC in the SEER database. The TNM stage of all patients was reclassified according to the American Joint Committee on Cancer TNM staging system (8th edition). The patient-selection process is outlined in Figure 1. The exclusion criteria were: (I) diagnosis prior to January 2004 or after December 2015; (II) age >80 years; (III) no cytologic/pathologic confirmation in the diagnostic information; (IV) no regional lymph node involvement; (V) missing clinical and/or follow-up information; (VI) patients not treated with chemotherapy; and (VII) patients with previous history of cancer.

Patient characteristics, including age at diagnosis, sex, differentiated grade, tumor laterality, tumor stage (T stage), lymph node stage (N stage), therapeutic regimens, and outcomes were collected. Patients were divided into the surgical group and non-surgical group. To eliminate the possibility of selection bias between the 2 groups, 1:1 propensity score matching (PSM) was performed by using the caliper match algorithm with a width of 0.1 of the standard deviation of the logit for the propensity score to evaluate the efficacy of surgical treatment for IIIA-SCLC patients with regional lymph node involvement (N1 or N2 according to TNM 8th edition). Surgically treated patients were separated into the lobectomy or bi-lobectomy group (LG), sub-lobectomy group (S-LG), and pneumonectomy group (PG) to compare the outcomes.

Between January 2004 and December 2015, 32 consecutive NAC plus radical resection-treated, central-type stage IIIA (N2) SCLC patients were reviewed at SPH. All patients in N2 stage were pathological confirmed. Postoperative follow-up was achieved by telephone contact or outpatient visit. The deadline for updating survival information in this study was June 30, 2017. The study was conducted in accordance with the Declaration of Helsinki (as revised in 2013). The study was approved by Shanghai Pulmonary Hospital ethics committee (No. K18-066), and informed consent was taken from all the patients.

A total of 2,199 patients in the SEER database who had received chemotherapy were included (Figure 1). A total of 114 and 2,085 patients received surgical and non-surgical treatment, respectively. The proportion of patients who received radiotherapy in the surgical group was significantly higher than that in the non-surgical group (71.9% vs. 24.1%, P<0.001). No significant difference in age at diagnosis was observed between the 2 groups (64 vs. 64.4 years, P=0.907). There was no significant difference in the distribution of other variables between the 2 groups. PSM was performed between the surgical and non-surgical subgroups. The number of patients in these 2 subgroups after PSM was 108 in each (Table 1).

OS analysis of patients in the SEER database

The results of univariate survival analyses after PSM were listed in Table 2. Compared with the non-surgical subgroup, a significantly higher OS was observed in IIIA-SCLC patients who received surgery + chemotherapy (OS, surgery vs. non-surgery, 44.8 vs. 21.2 months, P=0.048) (Figure 2A). As shown in Tables 3,4, 61 and 48 patients received lobectomy/bi-lobectomy and sub-lobectomy, respectively. Compared with lobectomy, sub-lobectomy could provide similar OS in NAC treated IIIA stage SCLC (OS, sub-lobectomy vs. anatomical lobectomy, 55.6 vs. 30.3 months, P=0.167) (Figure 2B). 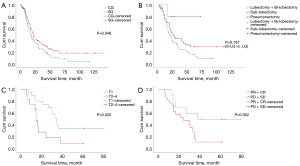 Characteristics of patients from SPH

A total of 32 centrally-located IIIA-SCLC patients (age range, 37–76 years) received NAC at SPH, and 29 patients received 2 NAC cycles (90.6%). Etoposide + carboplatin/cisplatin (EP/EC) were given to 26 patients (81.3%). Significantly better OS was observed in patients with NAC plus intentional radical resection compared with patients who received non-surgical treatment (29.7 vs. 16.2 months). According to paired-samples Student’s t-test, the median tumor size decreased significantly after NAC treatment (maximum dimension of SCLC, pre-NAC vs. post-NAC, 43 vs. 19.4 mm, P<0.001). Compared with patients in the LG, the median tumor size after NAC was significantly larger in the PG (26.8 vs. 18.9 mm, P=0.014) (Table 5).

SCLC remains a very aggressive and lethal malignant disease. The core treatment for SCLC is chemotherapy in combination with anti-PD-L1 antibodies, for which EP/EC plus Atezolizumab/Durvalumab, particularly for LA-SCLC and ED-SCLC, is most used and significantly improved prognosis (7,22,25-29). The efficacy of surgery combined with chemotherapy for LA-SCLC remains controversial (10). In the past 3 decades, surgically treated LA-SCLC has been relatively rare, particularly SCLC with regional lymph node involvement (4-6). Our analysis of patients in the SEER database indicated that, compared with non-surgical treated LA-SCLC, a significantly higher OS was associated with surgery plus chemotherapy (median OS: 44.8 vs. 21.2 months). The results of the SPH patient analysis largely verified our findings from our SEER database analysis that NAC plus surgery is potentially an effective treatment for IIIA-SCLC.

Previously published studies have demonstrated that the strongest prognostic factor for SCLC is regional lymph node involvement (30). Significantly higher OS has been observed in patients with neoadjuvant therapy plus radical resection (19,20,31). Based on these findings, surgical treatment might not be considered as a contraindication for IIIA-SCLC, and neoadjuvant and adjuvant chemotherapy or immunotherapy should be planned to enhance therapeutic effects.

The criteria for IIIA-SCLC surgery needs to be improved. First, NAC-treated patients whose tumor size reduces to less than 3 cm and receives radical resection could have significantly better OS. Therefore, a significantly better OS could be offered through radical-resection surgery to patients who have a consistent response to NAC. Moreover, IIIA-SCLC OS could be prolonged by chemotherapy plus surgery, regardless of the status of regional lymph node involvement. These results also support the findings of a previously published study that reported that a significant difference in OS was not observed between N1 and N2 lymph node-positive patients (19). Then, compared with patients who achieved complete or partial response after NAC, SCLC patients with stable disease followed by surgery could have worse OS, although no statistical difference is observed (Figure 2D). Therefore, no matter how neoadjuvant therapeutic responses are, NAC plus surgery, including pneumonectomy, is potentially beneficial for IIIA-SCLC patients.

With the expansion of surgical indications for LA-SCLC, the investigation of what surgery was performed is also carried out. In clinical work, individualized surgical strategy for different patients is in line with the basic surgical principles. Firstly, it is understandable that N1 involvement and advanced clinical T stage LA-SCLC patients were treated by lobectomy or bi-lobectomy. They could remove disease completely and could significantly improve patients’ outcomes. Second, for IIIA-SCLC with N2 involvement and a relatively smaller tumor size, radical resection is difficult, while sub-lobectomy could meet the needs of complete resection for primary lesions and preserve the postoperative pulmonary function of patients (32). According to the results of the SEER database analysis, a better outcome of IIIA-SCLC was not observed by extended resection, especially for patients with N2 involvement. Sub-lobectomy combined with appropriate adjuvant therapies is a safe and effective treatment, and offers beneficial outcomes. On the other hand, sub-lobar resection is as effective as lobectomy, surgery itself might have a limited role as prognostic factor. The results for the SPH analysis for central-type disease confirm that radical resection on primary tumors is an important procedure. Therefore, for central-type IIIA-SCLC patients who received NAC, pneumonectomy is associated with the best prognosis.

Analysis of the selection and use of postoperative adjuvant therapy, particularly for NAC-treated LA-SCLC patients, is the most crucial step in research to be performed next. Previously published studies have reported that standard treatments for postoperative SCLC are platinum-based chemotherapy with thoracic radiation; however, the effect of postoperative treatment remains clear (33,34). Based on the findings from the SPH patient analysis, the effect of existing postoperative adjuvant therapy is relatively limited. Adjuvant chemotherapy was not found to improve the OS of patients who received NAC plus radical resection. With the development of ICIs and AAIs for the treatment of ED-SCLC, the next step is to discuss their role in neoadjuvant and adjuvant therapy, which should be confirmed by RCTs (26,35). There is a high rate of SCLC treatment failure due to brain metastasis (13,14). Therefore, according to the current National Comprehensive Cancer Network guidelines, chemoradiotherapy in combination with adjuvant prophylactic cranial irradiation (PCI) is recommended as the standard treatment for IIIA-SCLC (7,36). The effect of adjuvant radiotherapy and PCI for NAC plus radical resection IIIA-SCLC patients warrants further research (37).

This retrospective study based on SEER and SPH database had some limitations inevitably. First, the information of dosage and cycle of chemotherapy could not be enrolled in SEER. Second, SEER would not contain the information on whether surgery or chemotherapy was administered first. Third, we would not know the reason clearly why the proportion of patients underwent sub-lobal resection was high in SEER. Fourth, the sample size of SPH is small relatively, which limits the possibility of utilizing more advanced statistical methods and discussing more prognostic factors for LA-SCLC, especially PCI and radiotherapy. In next work, prospective clinical trials concerning NAC or chemotherapy in combination with immunotherapy followed by radical surgery for LA-SCLC has been conducted in our center. We attempted to explain the confusions caused by these limitations by the next work.

Compared with non-surgical regimens, NAC followed by complete resection might improve the prognosis for IIIA-SCLC patients. After NAC treatment, IIIA-SCLC, particularly primary tumors with consistent response to NAC, surgical treatment should be performed surgical treatment as long as the patients can tolerate it. The efficacy of radical sub-lobectomy seems to be inferior compared with lobectomy alone for NAC-treated IIIA-SCLC. For central-type disease, NAC followed by intentional radical primary tumor resection is a suitable therapeutic approach. Further studies on postoperative adjuvant treatments are warranted, and relevant conclusions should be verified by RCTs.

The authors appreciate the academic support from the AME Thoracic Surgery Collaborative Group.

Funding: The present study was supported by the National Natural Science Foundation of China (Grant No. 81900078).

Reporting Checklist: The authors have completed the STROBE reporting checklist. Available at https://tlcr.amegroups.com/article/view/10.21037/tlcr-22-545/rc

Ethical Statement: The authors are accountable for all aspects of the work in ensuring that questions related to the accuracy or integrity of any part of the work are appropriately investigated and resolved. The study was conducted in accordance with the Declaration of Helsinki (as revised in 2013). The study was approved by Shanghai Pulmonary Hospital ethics committee (No. K18-066), and informed consent was taken from all the patients.