Airway stent implantation is an effective interventional bronchoscopic procedure for the treatment of CAO or airway stenosis (5-7). At present, self-expandable metallic (SEM) airway stents, such as over-the-while (OTW) stents of Chinese Nanjing micro-tech Company and Ultraflex stents from USA Boston Scientific Company, are implanted under the guidance of a guide-wire. These stents should be implanted under flouroscopy, which is time-consuming and requires unnecessary exposure to radiation (8-12) or direct bronchoscope visualization.

In a previous pilot study, we established the feasibility of a novel SEM through-the-scope (TTS) stent delivery system in CAO patients (13), which can pass through the working channel of a flexible bronchoscope. Furthermore, it can also be directly implanted into airway stenosis via flexible bronchoscopy, which does not require a guide-wire and avoids X-ray exposure. These changes might reduce the stent implantation operation time, increase the accuracy of implantation, and reduce the risk of suffocation. However, there is paucity of data regarding TTS stent placement. As a kind of novel SEM airway stent, there were only 3 studies reported the application of TTS stent in malignant CAO patients. All these studies were case series reports and the total numbers were limited (no more than 40 patients). More data about TTS stent efficacy and safety might provide further evidence for clinical application. Meanwhile, there was no comparison of data between TTS stent and common OTW stent. This prospective multi-center randomized controlled trial, we evaluated the efficacy and safety of the novel TTS stent system. We present the following article in accordance with the CONSORT reporting checklist (available at https://tlcr.amegroups.com/article/view/10.21037/tlcr-22-565/rc).

Male and non-pregnant female patients aged 18 to 75 years old who were diagnosed with unresectable malignant tumors and CAO were eligible for inclusion. CAO was defined as airway occlusion >50% at the trachea, right or left main bronchus, or right intermediate bronchus, as determined by computed tomography (CT) scan or bronchoscopy examination. The exclusion criteria were as follows: (I) patients that did not require stent implantation; (II) those with two or more sites of airway occlusion requiring stent implantation; (III) patients with lesions near the tracheal carina (less than 2 cm); (IV) those with a normal airway diameter >20 mm; (V) patients from which informed consent could not be obtained.

This open-label, individually randomized controlled trial was conducted from May 15, 2017, to December 30, 2018 (the date of enrollment of the last patient) at six sub-centers in China. Eligible patients were randomly assigned (2:1 ratio) to receive implantation of the TTS stent or OTW stent, in addition to standard treatment. The permuted block randomisation sequence, including stratification, was prepared by a statistician not involved in the trial using SAS software, version 9.4. The sample size (144 subjects) was assessed and calculated by a statistician before the trial. The standard treatment was determined by the attending physician based on the patients’ disease conditions, including supplemental oxygen, chemotherapy, radiotherapy, or molecular targeted therapy. The subjects underwent blood gas analysis, chest CT scan, and bronchoscopy before and after the stent implantation, and were routinely followed by bronchoscopy 1 week after stent implantation.

Before and after the stent implantation, the baseline characteristic data of all patients were collected, including dyspnea score, anaesthesia methods, and airway stenosis grade. The airway stenosis rate was calculated by the ratio of stenosis airway diameter and normal airway diameter according to a CT scan. Dyspnea was measured using the modified British medical research council (mMRC) score. Karnofsky (KPS) score and arterial blood gas exchange analysis, including partial pressure of oxygen (PaO2) and partial pressure of carbon dioxide (PaCO2), were all collected. The entire process of all surgical procedures was recorded by video. Complications relating to stent implantation were also collected until 7 days after stent implantation, including bleeding, stent displacement, fracture, and airway restenosis.

SAS 9.4 software (SAS Institute, Inc., Cary, NC, USA) was utilized for statistical analysis. Primary efficacy analysis was conducted on an intention-to-treat (ITT) basis and included all patients who had undergone randomization. The time to clinical improvement was assessed after all patients had reached day 7. Multiple imputation will be used for missing data. The primary analysis will use the ITT principle and a per protocol analysis will be undertaken to assess the robustness of the findings.

The t-test/calibration or t-test/Wilcoxon rank-sum test was used to compare quantitative data such as age at baseline. The chi-square test/exact probability method was used to compare qualitative data. The Wilcoxon rank-sum test or Cochran-Mantel-Haenszel (CMH) chi-square test was used for ordered classification data. The main efficacy indicator was the operative time of airway stent implantation. The operative times of different research groups were compared, and the 95% confidence intervals (CIs) were calculated using the group t-test or t-test for comparison between groups. The Chi-square test was used to compare the clinical effectiveness of the airway stent and the success rate of the release stent. P<0.05 was considered as significant.

The trial was conducted from May 15, 2017 to December 30, 2018 at six clinical sites. A total of 148 subjects were enrolled in this study. Of these, 14 subjects were excluded and 134 subjects were included in the ITT analysis, which accounted for 90.54% of the total number of subjects (Figure 1). 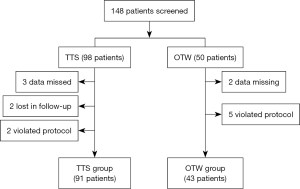 Table 2 and Figures 2,3 display the primary outcome and secondary outcomes. The time of stent implantation in the TTS group was 87 (52–132) seconds, which was significantly shorter than that in the OTW group [243 (200–300) seconds, P<0.001]. The shortest stent implantation times in the TTS and OTW groups were 28 seconds and 78 seconds, while the longest times were 375 and 610 seconds in these two groups, respectively.

Figure 2 Primary outcomes. The stent implantation times of six sites (A-F), the primary outcomes of all patients (G). The circles and triangles represent the value of outcome measures in every patient. TTS, through-the-scope; OTW, over-the-while. 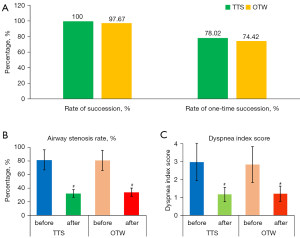 Figure 3 Secondary outcomes. The secondary outcome was the successful rate of stent implantation (A). The improvement of airway stenosis rates and dyspnea index scores in the two groups (B,C). #, P<0.001 as compared with before. TTS, through-the-scope; OTW, over-the-while.

As shown in Table 2 and Figure 2, the TTS stents significantly improved the dyspnea index scores (1.17±0.76 vs. 2.98±1.26) and relieved the airway obstruction rates (32.56%±5.38% vs. 81.77%±14.54%) of CAO patients. These results were similar to those in the OTW stents group. In the TTS group, two patients failed to show an airway obstruction improvement to less than 50%, while four patients failed this in the OTW group. Although the efficacy of stent implantation for patients in the TTS group was marginally higher than that in the OTW group (97.80% vs. 90.70%, P=0.093), the difference was not statistically significant.

In this randomized controlled trial, we confirmed that the novel TTS stent effectively relieved airway stenosis in CAO patients. The TTS stent implantation operation time was significantly lower than that of the OTW stent. Moreover, no additional complications were observed with the TTS stent as compared with the OTW stents. Our findings demonstrated the efficacy and safety of TTS stents in the treatment of malignant CAO patients. Although TTS stent implantation only reduced the operative time by 2.6 min, this represents an important clinical implication in CAO patients; for patients with more than 50% airway obstruction, the saved time of stent implantation can significantly reduce the risk of hypoxia and asphyxia.

There are multiple approaches to improve airway stenosis in malignant CAO patients, including mechanical debulking, cryotherapy, thermal therapy, and airway stent implantation (14-16). The metallic airway stent is a crucial treatment method for malignant airway stenosis, which is part of multimodal approach in malignant CAO patients (17-19). However, there are some limitations in the implantation procedures of previous stents, which should be implanted under X-ray or rigid/flexible bronchoscope visualization. This is time-consuming and requires unnecessary radiation exposure and higher technical conditions (16-19). Our previous pilot study demonstrated the preliminary application of a novel metallic airway stent in CAO patients (13), which could be inserted into the scope of a flexible bronchoscope and be implanted under direct visualization. This study confirmed that the TTS stent provided a similar efficacy and required less operative time as compared with the OTW stents. These results confirmed our previous reports and reduced the procedure risk in CAO patients, especially in patients with severe stenosis or worse KPS scores. Moreover, TTS stent implantation can be performed directly using a flexible bronchoscope and does not require a guide-wire, rigid bronchoscope, or X-ray. It provides a simple and easy method for stent implantation in malignant CAO patients.

Compared with our previous pilot study, the incidence of stent-related complications was significantly higher, which might be attributable to several factors. Firstly, the sites and severities of the airway stenoses differed between the two studies. The present study enrolled more patients with stenosis in the trachea or left main bronchus. Furthermore, the stenosis grade in the present study was also significantly higher than that in the previous report (81.77% vs. 68.7%). Secondly, the characteristics of the enrolled patients, including their underlying and malignant diseases, varied between the two studies. Finally, patients included in the present study were enrolled randomly from six hospitals, as compared to the previous retrospective single center study.

There are some limitations in this study that should be noted. First, there were no long-term follow-up results. This drawback is attributable to the design of the trial. The primary endpoint was the stent implantation operative time and did not include a long-term investigation after stent implantation. In future research, we will evaluate the long-term efficacy and complications of the TTS stent in malignant CAO patients. Second, this study only enrolled patients with one site of airway stenosis. Some patients with two or more sites of airway stenosis were excluded. These subjects might require Y-shaped stents or more than one stent, which significantly increases the risks and complexity involved in implantation. Therefore, we have designed another real-world study to observe the efficacy and safety of the TTS stent in CAO patients with one or more sites of airway stenosis with long-term follow-up.

In conclusion, this study confirmed the efficacy of the TTS stent in malignant CAO patients. The operative time of TTS stent implantation is significantly shorter than that of the OTW airway stent, which might reduce the risk and flexibility of stent implantation. Also, there were no additional short-term stent-related complications. This novel TTS airway stent might be a substitute for malignant CAO patients. However, the long-term safety still needs to be investigated in a large-scale real-world study.

The authors appreciate the academic support from the AME Thoracic Surgery Collaborative Group.

Funding: This study was funded by the Jiangsu Province Special Program of Medical Science (No. BE2016672) and the Suzhou Science and Technology Planning Project (Nos. SLT201917, SKY2021026).

Reporting Checklist: The authors have completed the CONSORT reporting checklist. Available at https://tlcr.amegroups.com/article/view/10.21037/tlcr-22-565/rc

Conflicts of Interest: All authors have completed the ICMJE uniform disclosure form (available at https://tlcr.amegroups.com/article/view/10.21037/tlcr-22-565/coif). HD received Royalties on the Dutau Novatech rigid bronchoscope and is the consultant for Novatech. The other authors have no conflicts of interest to declare.