Multiple mutations in the EGFR gene in lung cancer: a systematic review

Lung cancer is a public health problem worldwide. In 2021, it was estimated that around 235,760 new cases of lung neoplasms had been diagnosed, contributing to 131,880 deaths secondary to cancer. Overall, lung cancer causes more deaths than breast, prostate, colorectal, and brain cancers combined (1,2). According to recent data from GLOBOCAN, lung cancer (11.4%) is the second most diagnosed neoplasm after breast cancer in women (11.7%) and the leading cause of cancer death, accounting for 18.0% of the total cancer deaths (3). Among the lung cancer subtypes, non-small cell lung cancer (NSCLC) accounts for 85% of cases (4,5).

In recent years, identifying genetic mutations in the epidermal growth factor receptor (EGFR) has brought significant changes in diagnosing and managing patients with lung cancer (6). The EGFR gene is located on chromosome 7p11.2 and contains 28 exons. The protein it encodes has an extracellular domain, a transmembrane domain, and a cytoplasmic domain (7). The cytoplasmic domain (also called the tyrosine kinase domain) is responsible for the phosphorylation of its downstream targets and self-regulation. The impact of mutations in the EGFR gene falls on cell proliferation and differentiation regulation, hence its association with cancer (8,9).

The incidence of EGFR mutations differs significantly according to ethnicity, with incidences of 10–15% reported in European and North American populations, 26% in Latin America (10), and up to 62% in Asian people (11). In a recent study published by Suda et al. (12), in which 13,951 samples were obtained from patients with lung cancer, it was shown that the rate of smoking was higher in patients with the mutation in the EGFR gene (P=0.02). Deletion of exon 19 and the missense mutations in exon 21 (L858R) are the most common mutations of the EGFR gene (80–90%). They are considered common mutations sensitive to treatment with tyrosine kinase inhibitors (TKIs) (13). The use of EGFR TKIs has been first-line therapy in treating NSCLC with EGFR mutations (14). Patients with advanced NSCLC with TKIs-sensitive EGFR mutations may develop progressive disease after 12 months, mainly from secondary EGFR mutations leading to TKIs resistance (15). The main mutation after TKIs management is the substitution of the threonine residue at position 790 with methionine (T790M) within exon 20 of the EGFR gene, corresponding to approximately half of the cases of acquired resistance to TKIs (16,17).

The presence of multiple mutations, defined as the presence of more than one EGFR mutation, has not been much studied, and the clinical impact is uncertain. Therefore, we carried out this systematic review to describe the most common multiple mutations in the EGFR gene with clinical data collection. We present the following article according to the Preferred Reporting Items for Systematic Meta-Analyses (PRISMA) reporting checklist (available at https://tlcr.amegroups.com/article/view/10.21037/tlcr-22-235/rc).

We conduct a systematic review of descriptive studies, cohorts, and clinical trials published in Scopus, PubMed, Scielo, and Virtual Health Library literature. No limits were placed on the language or publication period in the search. The search was performed with the following terms: lung AND EGFR AND (“dual” or “multiple” AND “mutation”).

The PRISMA guidelines were followed for data extraction, analysis, and reporting (18). The search was carried out in December 2021. We consider papers available in the following languages: English and Spanish.

The inclusion criteria for the systematic review were descriptive studies, cohorts, and clinical trials with the presence of multiple mutations in the EGFR gene. Two reviewers (JJC and JPC) screened all the titles and abstracts from the publications and performed an eligibility assessment. Retrieved articles were rejected if the eligibility criteria were not met. A third reviewer (RPM) was consulted when eligibility criteria were unclear. Hand searches were performed from the papers that seemed to be relevant.

The extracted data from each article, when possible, were age, gender, smoking status, staging of the tumor, pathologic description of the tumor, kind of pathological sample, molecular method of diagnosis, history of TKIs use and resistance, and survival. All cases were analyzed individually and organized according to the exon with the lowest denomination present in the multiple mutations.

Univariate analysis was applied to determine the distribution of clinical and pathological findings.

We identified 533 original articles in the databases. Three hundred and thirty-seven duplicates were identified. One hundred and ninety-six articles, including clinical trials, analytical studies, and descriptive studies, were evaluated for eligibility. Finally, 41 articles including descriptive studies which consist of (6,9,19-39) and (40-51) (n=35, 85.36%), cohorts (52) (n=1, 2.43%), and clinical trials (53-57) (n=5, 12.19%) were included that contained data that met the eligibility criteria (Figure 1). 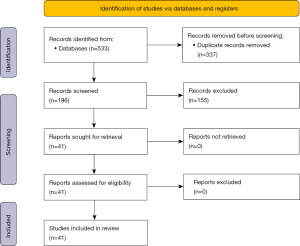 Four hundred and forty-six cases with multiple mutations in the EGFR gene were found out of 46,679 samples included in the systematic review (0.95% of the total) (Tables 1,2). Although not all the articles mentioned the histological type of cancer, according to the report’s information, it was possible to collect 125 cases of adenocarcinoma, 7 cases of adenosquamous carcinomas, 13 cases described as non-adenocarcinoma, and 1 case as bronchoalveolar carcinoma (previous terminology). The majority of samples were obtained after surgical (7 articles) or needle biopsy procedures (7 articles).

From the data of the patients included with follow-up, it was possible to obtain that the average progression-free survival (PFS) was 8 months (n=29 patients), and the overall survival (OS) was 19.3 months (n=24 patients).

Most frequent dual mutations according to exon location

In 140 of the 175 patients, the T790M mutation of exon 20 was present, of which 100 cases were de novo, and 40 patients were acquired after TKI treatment. In the group of de novo T790M mutations, it can be established from the cases with clinical information that the mean age was 55.18 years, none was previously managed with TKIs, and the PFS and OS were 8.45 months (1 article, 2 patients) and 24.02 months (2 articles, 3 patients), respectively. However, survival data is limited to a small number of cases. In the case of patients with T790M acquired mutation, the average age was 61.69 years; 90% of the subjects had previous management with TKIs, where the majority were first-generation TKIs. In this group of patients, more information on patients was available, and the PFS was 3.62 months (5 articles, 17 patients) and OS 8.03 months (3 articles, 10 patients).

The nine cases with triple mutations in the world literature are interesting. It was possible only to obtain information from four patients from our analysis. It is striking to see that a large percentage of the mutations involved are the most common mutations, including exon 19 deletions, L858R and T790M; which raises the hypothesis that with the development of last generation TKIs, the tumor biologically must give “third hits” to maintain its oncogenic activity. Especially, third-generation TKIs have shown better efficacy and safety profiles than other inhibitors. However, their resistance mechanism is more heterogeneous than that of other inhibitors, and in many cases, the resistance mechanism has not yet been identified (68).

This article has limitations. The most important was that clinical information data could not be collected in a large percentage of patients. In addition, where data were available, the type of information was not uniform, which prevented the extraction of accurate epidemiological data, especially regarding patient follow-up. Also, in general, when studying multiple EGFR gene mutations in patients with lung neoplasms, there is a risk that a mutation may be missed because molecular screening techniques are used in many medical centers and not specific genotyping methods (69). In our study, we mainly analyzed patients with deletions in exon 19; however, according to a recent study by Chen et al. (70), there are a large number of variants in this type of mutation (different starting locations and with or without amino acid insertion/substitution) that may have clinical repercussions, for which we consider it essential to take this into account for future studies.

According to our analysis, multiple mutations in the EGFR gene are found in less than 1% of the samples studied in patients with lung neoplasms. The most frequent dual mutations were T790M with L858R and exon 19 deletions with T790M. The most common single mutation associated with dual mutations was the mutation in exon 20 (T790M) (de novo and acquired). Acquired T790M mutations are more frequent in the subgroup of patients with a deletion in exon 19, whereas de novo mutations are more abundant in patients with the L858R mutation. The presence of T790M mutation showed poor outcomes in the follow-up of patients.

Reporting Checklist: The authors have completed the PRISMA reporting checklist. Available at https://tlcr.amegroups.com/article/view/10.21037/tlcr-22-235/rc

Conflicts of Interest: All authors have completed the ICMJE uniform disclosure form (available at https://tlcr.amegroups.com/article/view/10.21037/tlcr-22-235/coif). The authors have no conflicts of interest to declare.