The association between clinical parameters and resectability in stage III non-small cell lung cancer, and a combination of N2 lymph node burden and lung immune prognostic index score as a potential biomarker

Lung cancer is one of the leading causes of death with non-small cell lung cancer (NSCLC) making up a high proportion of lung cancers at approximately 85%. Roughly 30% of patients in NSCLC are diagnosed as stage III (1).

Stage I–IIIA NSCLCs are considered relatively early stages, and if possible, complete resection is the treatment of choice (2). stage III NSCLC is a heterogeneous group in terms of tumor burden and distribution, and often requires a multidisciplinary team approach (3,4). The treatment of stage III NSCLC is performed using a combination of both localized and systemic therapies involving surgery, chemotherapy, and radiation therapy. Because of the curative potential of surgery, it is important to determine whether the tumor is resectable or not. The Asian Thoracic Oncology Research Group suggested in their clinical algorithm of stage III NSCLC to categorize patients into resectable, potentially resectable, or unresectable groups (5).

For unresectable stage III NSCLC, the PACIFIC trial demonstrated the survival benefits of consolidation durvalumab after concurrent chemoradiation therapy (CCRT), altering the landscape of current treatment (6). However, more real-time data are required, especially among Asian populations, due to the relatively small proportion of Asian patients included in the PACIFIC trial (27%) (5,6).

In this multicenter cohort study on stage III NSCLC patients, we investigated the clinical parameters related to the ability to undergo complete resection and compared clinical outcomes according to resectability and initial treatment modalities performed on the patients. Furthermore, we evaluated possible clinical factors predictive of prognosis in stage III NSCLC. We present the following article in accordance with the STROBE reporting checklist (available at https://tlcr.amegroups.com/article/view/10.21037/tlcr-22-642/rc). 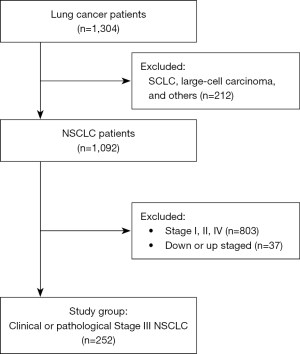 Definition of the groups

According to the first-line treatment modalities, the patients were divided into six groups: patients who were treated with complete resections, chemotherapy, CCRT plus durvalumab, CCRT without durvalumab, radiotherapy (RT) alone, and supportive care only.

The baseline characteristics were analyzed and were compared between the resectable and unresectable groups. Survival outcomes such as progression-free survival (PFS) and overall survival (OS) were also compared between the groups stratified according to resectability, first-line treatment modalities, and lung immune prognostic index (LIPI) score.

The LIPI score is the combination of derived neutrophil-to-lymphocyte ratio (dNLR) and LDH. dNLR is defined as absolute neutrophil count (ANC)/[white blood cell count (WBC) − ANC]. dNLR values greater than 3 and LDH values greater than the upper normal limit are counted as one factor. The LIPI score was used to categorize the study patients into three groups according to the number of the factors (good, 0 factor; intermediate, 1 factor; poor, 2 factors) (7). The cut-off value of LDH was defined according to the standards of each hospital.

The subgroup analysis was done to describe N2 disease more specifically. The baseline characteristics and survival outcomes of clinical N2 subgroup were analyzed using new scoring system. The parameters included in the scoring system were lymph node (LN) station (single or multi), LN volume (non-bulky or bulky), and LIPI score (0, 1, or 2). Single LN station was scored as 0, and multi-station was scored as 1. Non-bulky LN was scored as 0, while bulky LN was scored as 1. The final score was counted as the sum of LN station, LN volume, and LIPI scores, which ranges from 0 to 4 (Figure S1).

All statistical analyses were performed using IBM SPSS Version 24. Categorical variables were compared using Chi-square or Fisher’s exact tests, and continuous variables were analyzed using student T-tests or Mann-Whitney tests depending on the normality. The survival curves were shown using Kaplan-Meier curves, while the log-rank test was used when comparing survival outcomes between the groups. Logistic regression analysis was performed to investigate the association between clinical factors and unresectability. Cox regression analysis was used to identify the factors associated with PFS and OS. Statistical significance was set at P<0.05.

This study was approved by the Institutional Review Board of Catholic Medical Center, Korea (No. XC22RIDI0056). Informed consent was waived due to the retrospective study design. The study was conducted in accordance with the Declaration of Helsinki (as revised in 2013). 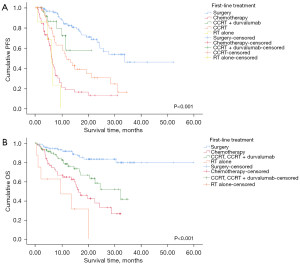 Figure 3 Kaplan-Meier PFS and OS curves according to first-line treatment: progression-free survival (A) and overall survival (B). OS could not be calculated in CCRT with durvalumab group, because all the patients in this group survived during observation time. PFS, progression-free survival; OS, overall survival; CCRT, concurrent chemoradiation therapy; RT, radiotherapy. 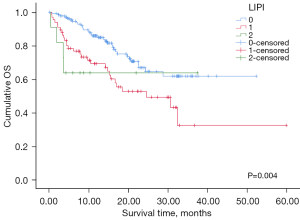 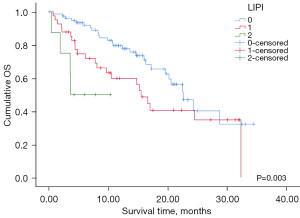 Multivariate analysis on PFS and OS

The aim of this study was to evaluate patients with stage III NSCLC with a focus on resectability. Smoking history and low FEV1 were significantly related to patients not receiving complete resections. Patients with tumors of stage IIIB, T4, and with LN metastasis were less likely to receive complete resections as the first-line treatment. The LIPI score exhibited potential predictable value in OS among the entire study population and unresectable subgroup, specifically. LIPI score 0 was significantly related to better OS when compared to LIPI 1 and 2. Most of the recent studies have used LIPI as a prognostic factor for outcomes of immune checkpoint inhibitor therapy. This study demonstrated the possibility of using LIPI as a prognostic factor for stage III NSCLC, especially for patients who cannot receive surgery.

In recent studies, patients with stage III NSCLC who received surgical resections exhibited better PFS and OS compared to those who did not. In a study by Myall et al., 5-year OS was significantly improved in complete resections [33% (R0) vs. 19% (R1) vs. 12% (R2), P<0.0001 for R0 vs. R1] (8). In a real-world international observational study (KINDLE), median PFS (mPFS) and median OS (mOS) were 19.9 and 65.4 months, respectively in resectable NSCLC patients, while 10.6 and 25.0 months, respectively, were the values in unresectable patients (P<0.0001) (10). This study used the definition of resectability that differed from our study, as the resectable group also included patients who did not receive surgery. The mPFS of the resectable group was longer in our study, and one of the reasons is that our study defined resectable patients as those who actually underwent surgery. The patients who were considered as operable that were selected by clinicians were sorted into the resectable group.

In patients with unresectable stage III NSCLC, CCRT followed by consolidation durvalumab therapy significantly improved survival outcomes in our study. The PACIFIC trial reported that PFS and OS were significantly longer in patients with CCRT followed by durvalumab compared to the placebo (16.8 vs. 5.6 months, P<0.001 for PFS and 66.3% vs. 55.6%, P=0.005 for 24-month OS rate, respectively) (6,11,12). In the real-world setting, durvalumab maintenance therapy after CCRT also exhibited significantly improved local-regional-progression-free-survival (LRPFS; P=0.002), PFS (P=0.018), and OS (P=0.005) compared to CCRT alone (13). Our study is consistent with the results from present studies. The CCRT with durvalumab group exhibited longer PFS compared to other treatments except for surgery, and OS could not be calculated because all the patients in this group survived during the observation time.

Several biomarkers reflecting systemic inflammatory status have been suggested for various types of cancers. Baseline ANC and dNLR were significantly associated with disease progression and death in ipilimumab-treated melanoma patients (P<0.0001 for all) (14). An elevated platelet to lymphocyte ratio (PLR), a marker of inflammation, has been associated with poor prognosis in several malignancies (15). LDH is a biomarker of tumor burden and is also considered to have prognostic value in several types of cancers (16). For lung cancer, Mezquita et al. suggested that LIPI, a combination of pre-treatment dNLR and LDH, was correlated with poor outcomes for immune checkpoint inhibitor therapy in patients with advanced NSCLC (7). Since LIPI reflects inflammatory status, we attempted to apply LIPI as a biomarker for patients with stage III NSCLC in this study. High LIPI score was correlated with outcomes exhibiting poor OS in both overall patients with stage III NSCLC and the unresectable patients group. Further validation in larger study populations is necessary, but our study suggested the potential value of LIPI scores as a biomarker predicting clinical outcomes in stage III NSCLC.

Making the decision of treatment modalities in stage IIIA-N2 disease is more challenging. As N2 involvement exhibits heterogeneous disease entity, treatment often requires bi- or trimodalities, and the clinical role of complete resection requires further investigation (17). In guidelines on decision of treatment options for stage III N2 disease, LN extent (single station or multi-station, single zone or multizone) and LN volume (non-bulky or bulky) are included as criteria (18). Stage III N2 disease is heterogeneous in terms of tumor burden, anatomical distribution of tumor cells, and treatment modalities. We believe that multiple factors should be considered when predicting outcomes of this heterogenous patients group. In the subgroup analysis of patients with N2 diseases, we attempted to make new scoring system. LN station and volume parameters reflect the anatomical distribution and tumor burden of the N2 disease. LIPI score focuses on the onco-immunological background, as this biomarker has shown association with clinical outcomes in NSCLC patients undergoing immunotherapy (7). As was shown in our results, this multi-parameter scoring system may predict survival outcomes of the N2 disease. However, larger N2 populations are necessary for validation.

Our study has several limitations. First, due to the retrospective design of the study, accurate comparisons of clinical outcomes between groups categorized by initial treatment modalities may be limited. Second, assessments of OS in patients who received CCRT followed durvalumab maintenance were limited due to the relatively short observation time.

In this study, the resectable group, which consisted of patients who received surgery as the first-line treatment, exhibited better PFS and OS compared to the other patients. Unresectability was associated with significant smoking history, lower FEV1, and higher cancer stages. Lower LIPI scores demonstrated a higher OS rate that was also observed in the unresectable group. In clinical N2 subgroup, LN status combined with LIPI score may have predictive value for OS.

Reporting Checklist: The authors have completed the STROBE reporting checklist. Available at https://tlcr.amegroups.com/article/view/10.21037/tlcr-22-642/rc

Conflicts of Interest: All authors have completed the ICMJE uniform disclosure form (available at https://tlcr.amegroups.com/article/view/10.21037/tlcr-22-642/coif). The authors have no conflicts of interest to declare.

Ethical Statement: The authors are accountable for all aspects of the work in ensuring that questions related to the accuracy or integrity of any part of the work are appropriately investigated and resolved. This study was approved by the Institutional Review Board of Catholic Medical Center, Korea (No. XC22RIDI0056). Informed consent was waived due to the retrospective study design. The study was conducted in accordance with the Declaration of Helsinki (as revised in 2013).