This paper will discuss the challenges in preventing and managing chemoradiation induced acute esophageal toxicity (AET). Following a clinical summary of AET, the current guidelines from the Netherlands Cancer Institute will be discussed including a case study.

Concurrent chemoradiation (CCRT) is the treatment of choice for locally advanced non-small cell lung cancer (NSCLC). The increase in survival for concurrent versus sequential chemoradiation (SCRT) (+5.7% at 3 years) or radiotherapy (RT) alone (+7% at 3 years) is mainly due to an improvement in local control of the disease (1). Several radio sensitizing agents are in use (2) and daily low dose cisplatin has shown to be an effective treatment regimen (3,4). Because of a milder hematological toxicity profile, more patients are able to benefit from this treatment compared to regimen using high dose chemotherapy (5-9). However, recent analysis revealed that 35% of the patients suffered from severe acute toxicity, including anorexia, nausea and vomiting, esophagitis and dehydration. Mediastinal tumor location and/or lymph nodes are common in locally advanced NSCLC patients, resulting in the involvement of the esophagus in the radiation field. Due to the sensitizing effect of cisplatin, the incidence of AET is higher in CCRT compared to SCRT or RT only (10,11). Mucosal inflammation (12) and edema of the esophagus causes functional impairment, and is clinically described as a blocking sensation or pain when swallowing. Severe AET usually leads to weight loss, dehydration and malnutrition, requiring intravenous hydration, tube feeding or even hospitalization (13). As it is believed that the completion of CCRT optimizes the beneficial sensitizing effect, we took efforts to increase the management of this toxicity caused by CCRT. Although it is recognized that a range of toxicities needs to be addressed, AET is one of the most burdensome which can lead to clinical impairment and a severe reduction in quality of life.

Aproximally 90 patients with cytological or histological proven locally advanced NSCLC are treated with CCRT in the Netherlands Cancer institute every year. Treatment consists of cisplatin 6 mg/m2 as a 10 mL bolus injection, 1–2 hours prior to RT, for a total of 24 administrations over a period of 32 days. The standard RT consists of 24 fractions of 2.75 Gy, resulting in a total dose of 66 Gy to the primary tumor and involved lymph nodes. In case of large tumors or re-irradiation, where the mean lung dose exceeds 20 Gy, an alternative RT fractionation scheme is applied without changing the administration of cisplatin. All patients are treated with 7-field intensity modulated radiotherapy (IMRT) (3).

In case of severe comorbidities, a too large tumor volume, high age and/or a decreased performance status, patients are treated with SCRT or RT only.

Acute toxicity is defined as toxicity occurring with 3 months after treatment. Recent analysis showed that AET grade 2 occurred in 37% of the patients and grade 3 in 20%. The median onset was day 15 with a maximum grade at day 30 and of the grade 3 patients 48% recovered to grade 0 within 3 months. The median duration was 43 days for grade 1, 50 days for grade 2 and >80 days for grade 3. For grade 2 analgesics and dietary supplements are required, for grade 3 tube feeding and/or hospitalization (Table 1) (13). 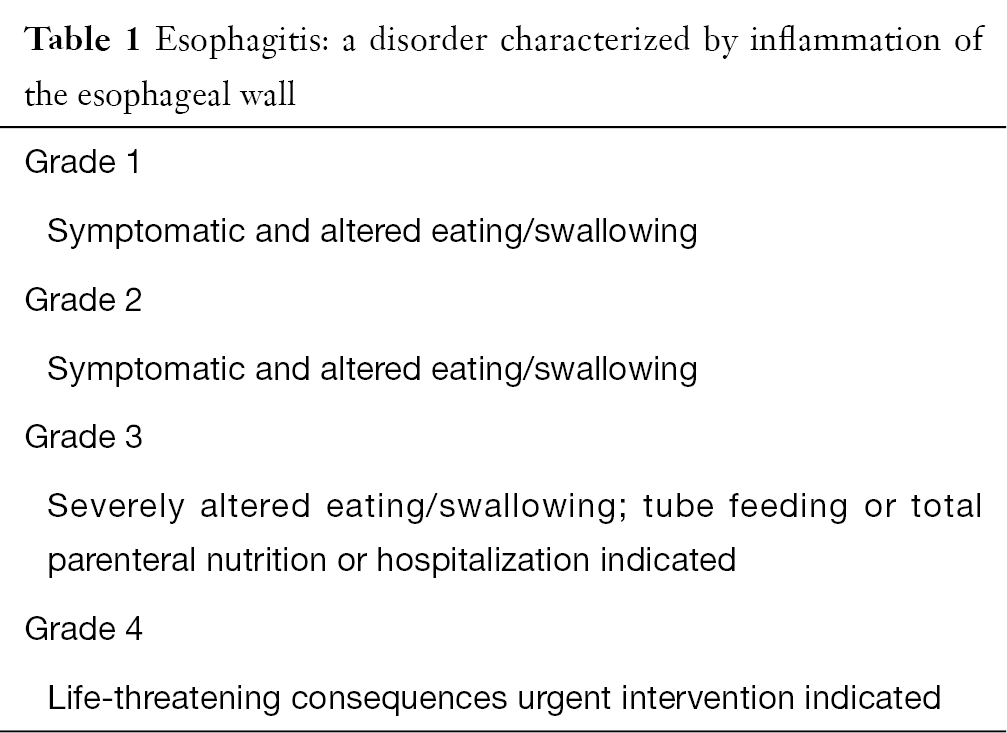 Table 1 Esophagitis: a disorder characterized by inflammation of the esophageal wall
Full table

Acute radiation esophagitis is primarily due to effects on the basal epithelial layer of the esophageal mucosa. The normal esophageal mucosa undergoes continuous cell turnover and renewal. RT causes a thinning of the mucosa and as a result progresses the peeling.

A prospective study from the Netherlands Cancer Institute of 139 patients with inoperable NSCLC treated with IMRT and concurrent chemotherapy aimed to analyze predictive parameters for AET with the dose effect relationship between AET and dose volume parameters investigated (14). Before the introduction of IMRT, 3D-conformal radiotherapy (3DCRT) was the standard technique used for radical treatment. The treatment planning esophagus constraint at that time was the length of the esophagus ≤12 cm. Because this constraint was found insufficient in patients treated with 3DCRT and concurrent chemotherapy, a derived V35 (relative volume of the esophagus receiving more than 35 Gy) model was scaled (14). However, with IMRT dose-distributions and dose-volume-parameters for the esophagus having changed, it was concluded that V35 was no longer sufficient as well. It was revealed that in IMRT the relative volume of the esophagus treated with 50 Gy (V50) was a more predictive parameter for AET (14). In addition to these findings patient and treatment characteristics were analyzed in relation to AET, including the V50 model. Univariate and multivariate analyses were performed to correlate clinical, tumor, dosimetric and chemotherapy dose variables to AET grade ≥2 and grade 3. V50 (oes), ethnic background, and the number of cisplatin administrations were significantly correlated with grade 3 AET (13). As CCRT is associated with a favorable overall survival of 35% at 3 years, a certain risk on grade 3 AET is deemed acceptable since the toxicity is often temporary and manageable. However, in our study, grade 3 patients had a low recovery rate (48%) within 3 months and a long median duration (>80 days). We concluded that 52% of grade 3 patients are subjective to a risk of developing late esophagus toxicity, which in the severe cases (e.g., stenosis and fistula) could deteriorate the long-term quality of life, or even compromise survival (15).

In order to identify and categorize patients with AET by its severity the CTC classification is used in clinical practice (Table 1) as it helps to communicate and initiate clinical guidelines.

We present below the clinical guidelines that have been developed and introduced in the Netherlands Cancer Centre.

In case of 5% weight loss in 1 month or ≥10% in the last 6 months before treatment nutritional food supplements are administered.

When the patient loses 5% of body weight loss in one month or 2 kg per week, tube feeding is started. This is also the case when there are clinical or biochemical signs of dehydration with an oral intake of maximum 1,000 mL/day.

As per during treatment.

In case of grade 2 AET, paracetamol, sucralfate and proton pump inhibitors are administered, eventually with codeine or tramadol with additional laxation. In case of grade 3, durogesic transdermal and Abstral sublingual or instanyl nasal spray are added to paracetamol suppository. Also, tube feeding is indicated. In case of uncontrollable pain, the patient is admitted in the hospital for intravenous analgesics. In case of a superimposed candida infection, treatment with fluconazole is indicated.

Approximately 19% of the patients were not able to finish the complete 24 administrations of cisplatin because of a significant increase of the serum creatinine (7). This was mainly due to the inability of drinking enough fluids because of esophageal pain. In 2011 we started to prehydrate patients before the cisplatin bolus injection. The prehydration consisted of 1 L of natriumchloride (NaCl) 0.9% intravenously administered in one hour. In case of a history of cardiac failure or the occurrence of the syndrome of inappropriate anti-diuretic hormone secretion (SIADH), patients were given 500 mL of NaCl 0.9%. In the prehydrated group, only 2% discontinued treatment (P=0.001) (16). Surprisingly, the incidence of AET grade ≥2 decreased following prehydration: 62% vs. 34% (P<0.001) for the non-prehydrated and the prehydrated group, respectively (7).

In case ≥30% of the esophagus receives 50 Gy, there is a significant risk of AET grade 3. This information is useful for initiating proactive interventions such as the insertion of a percutaneous endoscopic gastrostomy and the administration of pantoprazole.

Mrs X is a 52-year-old patient, married, with two teenage children. She has a history of atrial fibrillation and is a former smoker with 40 pack years. In 2014 she developed a cT2N2M0 (Stage IIIa) adeno carcinoma of the right lung with positive lymph nodes in Naruke 7 for which CCRT was indicated. In the 3rd week of treatment swallowing became difficult and painful. She was able to eat and drink adequately so paracetamol 4×1,000 mg and pantoprazole 40 mg once daily was initiated. In week 5, the oral intake was decreased to a minimum because of esophageal pain. The serum creatinine increased and she started losing weight. By then, the family of the patient felt extremely concerned, feeling incapable of controlling the situation. As a consequence, they became angry with the patient for not consuming the food they prepared for her every day. When an endoscopy was performed, several mucosal defects were seen in the distal part of the esophagus; evidentially causing the pain. The patient was hospitalized and tube feeding and intravenous hydration was started. A pain physician was consulted and she started with intravenous analgesics. She was discharged after 1 week with oral analgesics and tube feeding. Within 3 weeks the esophagitis had recovered to AET grade 1 and she was able to eat and drink adequately so the tubefeeding could be discontinued.

CCRT for locally advanced NSCLC is the treatment of choice despite its toxicity profile. AET is one of the most profound toxicity caused by this treatment but accepted because of survival benefits. The clinical implications of AET can vary but most often consist of pain, dysphagia, weight loss and dehydration. As a result, health related quality of life is likely to be (temporary) compromised. It is therefore recommended to optimize patient education and supportive care management for palliating symptoms. Although research has been performed regarding pharmaceutical management of AET, there are no guidelines to address this problem. Demonstration has been made of the difference in pain in esophageal cancer patients receiving sucralfate or sodium alginate for AET following external beam and intracavitary RT (17). In the sucralfate group, patients had a significant relief of symptoms within 7 days of treatment and it was detected endoscopically that most ulcers had healed by 12 days of treatment. Patients receiving sodium alginate showed little improvement of symptoms and had persistent ulcers even after 4 weeks of therapy. However, although these results seemed promising, there was limited follow up with negative outcomes regarding sucralfate (18,19).

As seen above there is not yet a satisfactory golden standard in the management of acute oesophagus toxicity. Health care professionals should aim to inform patients about the risk of AET and start medication and nutritional interventions pro-actively.