Primitive neuroectodermal tumors (PNETs) are highly malignant neuroectodermal neoplasms affecting bone and soft tissues (1) accounting for 4–17% of all pediatric soft tissue tumors (2) while adult affection are extremely rare and have a very poor prognosis. They are characterized by small round blue cells, thus sharing pathological similarity with other small round cell tumors (1) and exhibiting diverse clinical manifestations. PNETs are highly uncommon comprising 5% of all small round cell tumors (3). Peripheral primitive neuroectodermal tumors (pPNETs) are the rarest class of PNET belonging to the Ewing’s or Askin’s family of tumors. They are highly aggressive and have an average life expectancy of 8 months (4). Thoracic lesions generally arise from intercostal nerves (5) of chest wall or pleura while primary adult intrapulmonary PNETs are exceedingly rare with very few documented cases till date. Multimodality therapeutic approach is generally considered with maximal safe surgical resection followed by adjuvant chemo-radiation (6,7). However, inoperable cases can be managed with chemotherapy followed by radiotherapy (RT) (8) with satisfactory results. We present the second largest case series of PNET lung after Weissferdt and Moran (9) with an idea to highlight their extreme rarity, clinicopathological characteristics, therapeutic challenge, final outcome and subsequent follow-up. To the best of our knowledge, this is the first series till date where all cases have been treated with chemo-radiation with significant response to therapy. 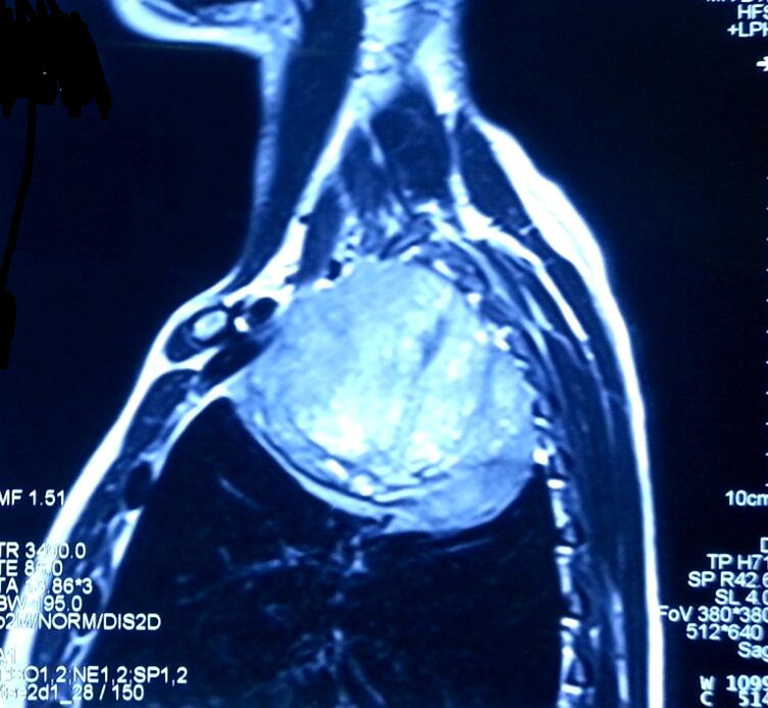 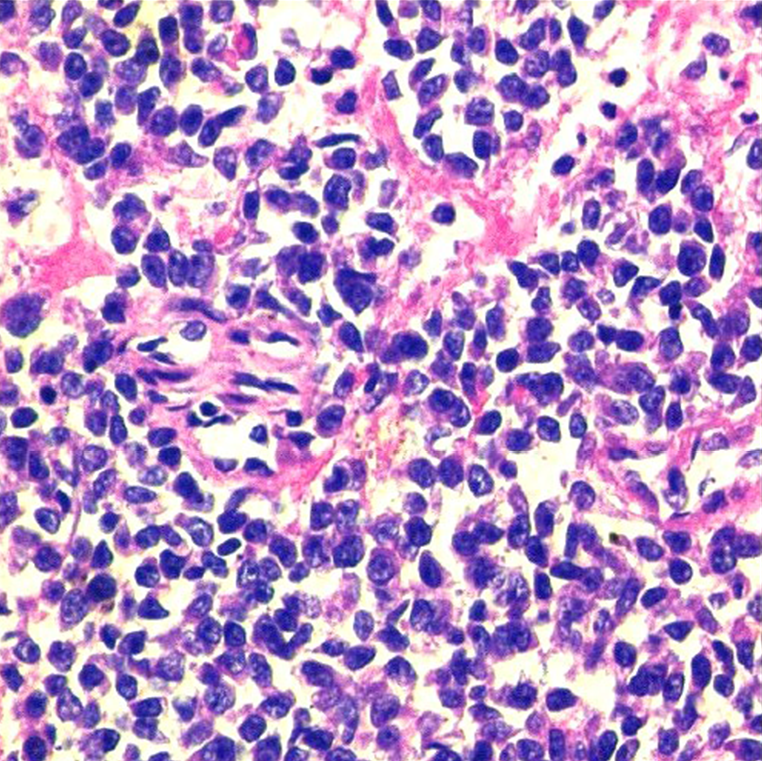 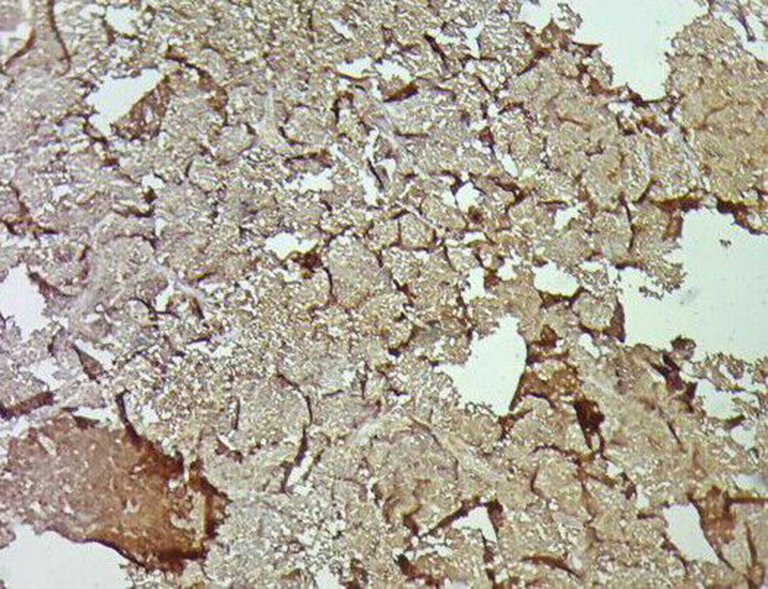 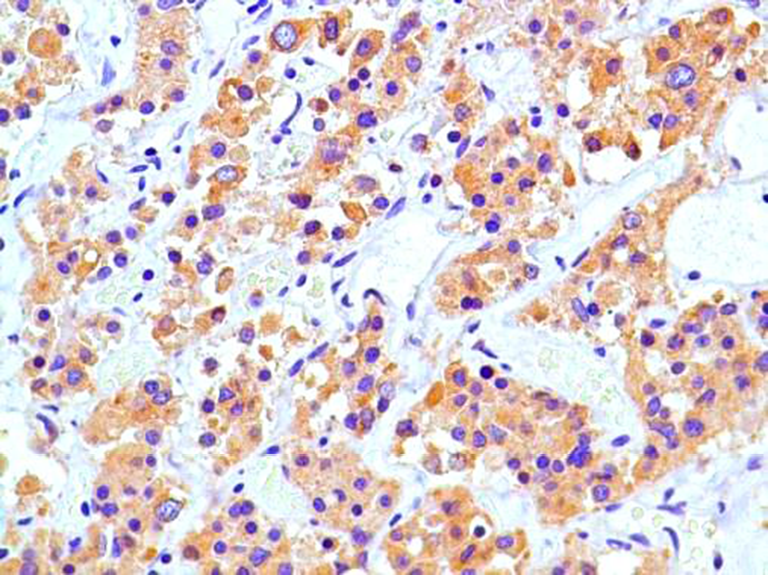 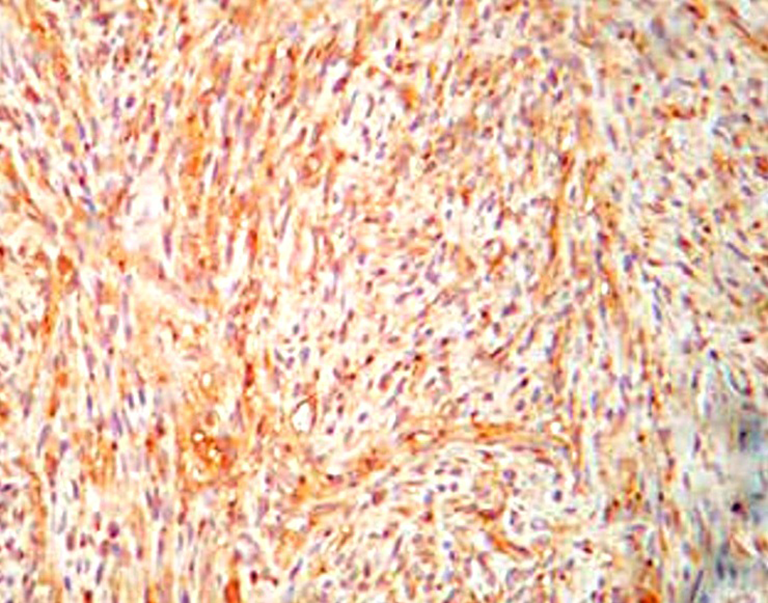 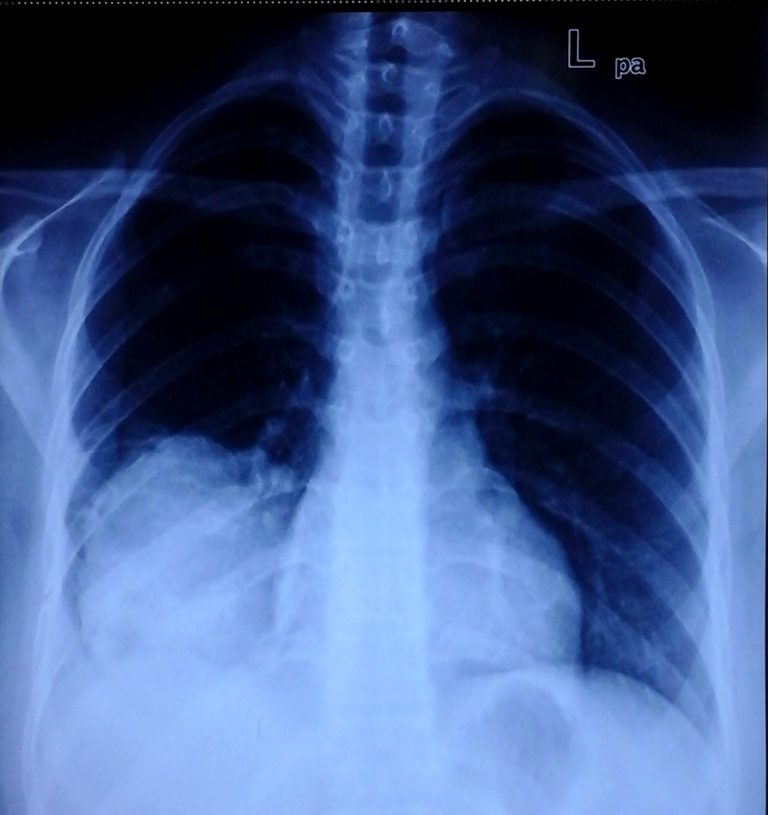 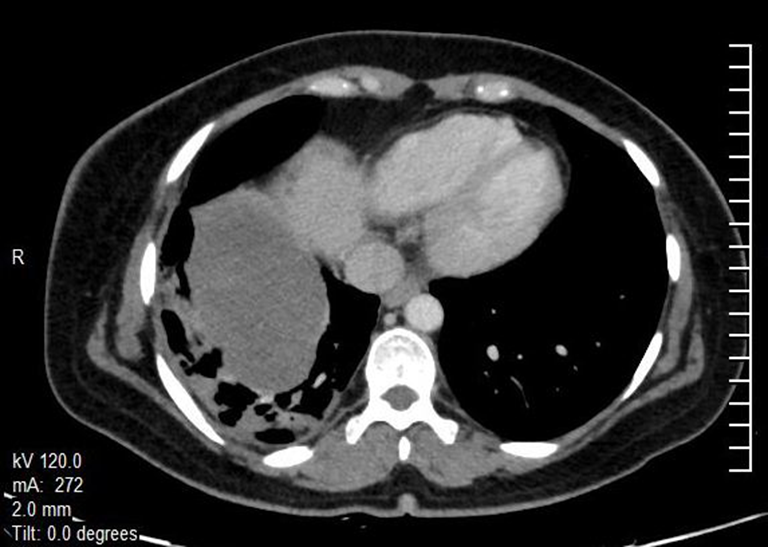 A 36-year-old female complained of cough, dyspnoea and periodic fever over 1 month. There was no history of hemoptysis or chest pain. CT scan of thorax (Figure 8) showed a large ill-marginated mass lesion in the left middle lobe measuring 10.5 cm × 9.3 cm × 9.8 cm causing mild collapse of underlying left lung parenchyma. The fat planes with posterior surface of left atrium and descending aorta was lost. There was no mediastinal lymphadenopathy. CT guided biopsy from the lung mass showed small round cells with scanty cytoplasm, oval nuclei with foci of tumor necrosis and IHC positivity for NSE, chromogranin, synaptophysin, CD 99, vimentin, CD 56, and S100 while negative for CK, SMA, TTF-1 and BCl-2 which gave the diagnosis of PNET lung. 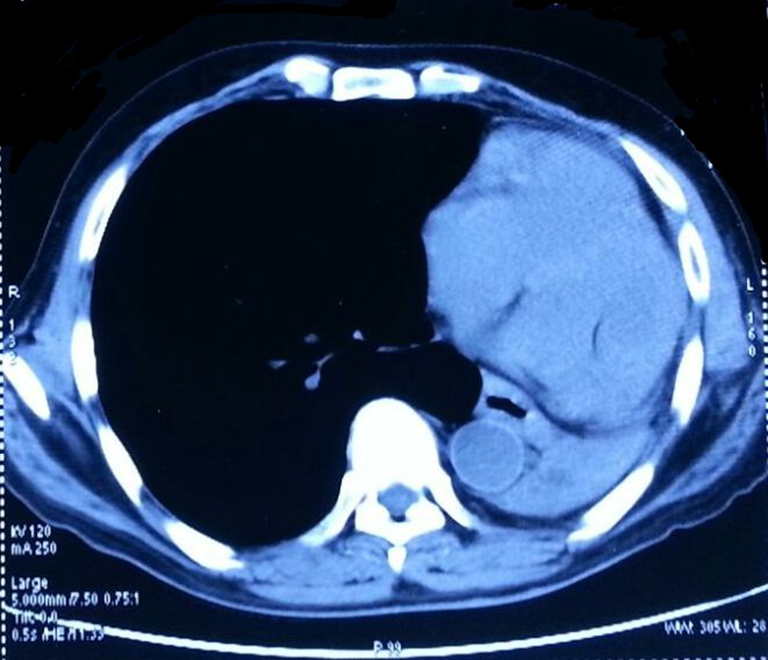 Initial metastatic work up in all three cases with MRI brain and positron emission tomography (PET) scan were negative though the primary in all our cases were not very FDG avid All three cases were not considered for upfront surgery in view of invasion and abutment of adjacent vital structures. Without an established therapeutic protocol for PNET lung, all patients were treated with chemotherapy VAC (vincristine 2 mg/m2, adriamycin 75 mg/m2 and cyclophosphamide 1,200 mg/m2) was given as intravenous bolus infusion on day 1, followed after 21 days by IE (ifosfamide 1,800 mg/m2 infused over 1 hour, daily for 5 consecutive days, with mesna uroprotection, plus etoposide at 100 mg/m2 infused over 2 hours on the first day). Courses were repeated every 3 weeks for a total of 8 cycles. We followed revised RECIST guidelines version 1.1 for assessing the response 4 weeks after chemotherapy with CT scan which suggested a minimum of 30% decrease in the longest diameter of our target lesion which was the lung mass and hence we labeled the response as partial response (PR). Initially surgery was kept as an option after chemotherapy; however in view of PR no further surgery was contemplated. All patients were then subjected to RT to a dose of 60 Gray (Gy) to post-chemotherapy residual volume with a margin of 1–2 cm around GTV and 0.5 cm margin for PTV by 3-dimensional conformal radiotherapy (3DCRT) technique. Post-RT evaluation with CT scan showed a static disease with significant symptomatic relief and improved KPS. No further chemotherapy was exhibited in view of post-RT static disease and to prevent any undue toxicity. Presently all three patients are on regular follow-up for more than 6 months without any evidence of disease progression and metastasis.

PNETs are a group of highly aggressive and lethal neoplasms with an uncertain histogenesis composed of classical small round blue cells of undifferentiated neuroectodermal origin affecting soft tissue and skeletal system (1). They comprise 5% of all round blue cell tumors (3). PNET as a pathologic entity was first described by Stout in 1918 in a tumor of ulnar nerve and gave the concept of their neural origin. Because of pathological similarity with other tumors with small round cells, they generally exhibit diverse clinical manifestations which led Batsakis et al. (1) in 1996 to classify PNET tumors based on tissue of origin into three sub-classes like central nervous system PNETs (cPNETs), autonomic nervous system PNETs or neuroblastomas and peripheral PNETs (pPNETs) originating from tissues outside CNS and ANS.

Peripheral PNETs are further sub-classified into Ewing’s group of tumors affecting long bones of femur, humerus or pelvis, Askin tumors of soft tissue and bones of thoracopulmonary region, ectomesenchymoma and peripheral medulloepithelioma. Ewing’s tumors and malignant peripheral PNETs show similar genetic characteristics with reciprocal translocations of chromosomes 11 and 22 at Ewing sarcoma breakpoint region 1 (EWSR1) differing only in degree of neural differentiation with the former being more differentiated than latter (10). pPNETs are the most aggressive form with a poor prognosis as compared to other neuroectodermal entities. These tumors have a male preponderance and accounts for 4% to 17% of all pediatric soft tissue neoplasms (2). Apart from thoracic region they are also known to arise in head and neck, esophagus, liver, kidneys and adrenal glands. The prognosis of pPNETs depends on the tumor site, tumor volume and metastasis (11).

Thoracic PNETs was first described by Askin et al. (12) in 1976 as rare tumors arising from chest wall or underlying lung pleura invading bone, lung or mediastinum in children and young adults. Primary pulmonary PNETs without any chest wall or pleural component are very uncommon and less than 20 such cases have been reported in literature, mostly as single case reports apart from Weissferdt and Moran (9) who reported six primary PNETs of the lung in 2012. They described a mean age of 32.3 years (range, 22–56 years) in 4 males and 2 females suggesting a male predilection, presenting symptoms of dyspnoea, chest pain and cough with tumor size ranging from 4 to 9.6 cm. In our series, the mean age is 32 years (range, 29–36 years) in 2 female and 1 male subjects, similar complaints and tumor size ranging from 8.3 to 11.3 cm. The most common presentation of lung PNETs are cough, chest pain, dyspnoea, hemoptysis or even fever like other lung pathologies. The differential diagnosis can be a small cell lung carcinoma (SCLC), rhabdomyosarcoma, neuroblastoma, lymphoma, synovial sarcoma and Langerhans cell histiocytosis (13). SCLCs have a history of smoking and usually present at an older age while younger age and no smoking history is associated with lung PNETs. They are extremely aggressive with a dismal prognosis as patients may present with an upfront metastatic disease to contralateral lung, bone and bone marrow (11).

Imaging with chest radiographs, CT scans, MRI generally show intrapulmonary heterogenous mass lesions often invading surrounding structures and vital organs but do not possess the specific features to differentiate the mass from other lung lesions (14) while PET scan, bone scan and bone marrow biopsy form the part of a metastatic workup because of high probability of metastasis at presentation. The diagnosis of this disease entity is primarily by histopathological evaluation of the biopsied tissue confirmed by IHC. Primary lung PNET can often be misdiagnosed with a metastatic lung lesion, mucinous adenocarcinoma or squamous cell lung carcinoma and therefore a thorough history of tumors in other sites of body especially in oral cavity is of utmost importance. Since PNETs and other small round cell tumors share the same histological picture, IHC plays the lead role in their differentiation. Immunopositivity for CD 99, vimentin and S100, though non-specific establishes the diagnosis of Ewing’s and PNET (15). IHC staining for NSE, synaptophysin and chromogranin confirms the diagnosis of lung PNET as was seen in our cases. TTF-1 is found predominantly in pulmonary adenocarcinomas and thyroid malignancies while CD 56 is expressed in any neuroendocrine or PNET group of tumors as was expressed in our cases also. Other IHC markers like CK for squamous cell carcinoma, desmin for pulmonary rhabdomyosarcoma, SMA for any soft tissue sarcoma, EMA for any sarcoma or lymphoma while LCA, BCl-2, CD20, CD45 for acute lymphoblastic lymphoma and leukemia, are used to distinguish these entities from pulmonary PNET. However to confirm the diagnosis of PNET, amplification of ESWR1 by situ hybridization techniques is required. Ishii et al. (16) in 2001 demonstrated the novel concept of expression of molecular oncogenic drivers like CD 99 or MIC2 and EWS-FLI1 chimeric gene by pPNETs to define, diagnose and distinguish them from cPNETs.

Regarding the management aspect of pulmonary PNETs, no definite treatment guidelines are present due to its extreme rare occurrence, paucity of relevant literature and lack of clinical trials. Generally a multimodality approach is followed depending on whether the disease is localized or disseminated. A lung primary is generally treated as a SCLC with complete surgical resection whenever possible for stage I disease and for stage II onwards, chemo-radiation becomes the definitive therapeutic option. Current recommendations for chemotherapeutic agents for lung PNET and pPNET/Ewing’s remain same (3) with vincristine, doxorubicin and cyclophosphamide alternating with ifosfamide and etoposide (VAC/IE). RT concurrent with chemotherapy is standard and preferred for limited stage lung lesions while sequential RT is beneficial for selected patients with extensive or larger lesions which cannot be covered with standard radiation planning portals. Our cases were deemed inoperable due to involvement of adjacent vital structures by the lung lesion and RT was given after chemotherapeutic response, as consolidative thoracic RT is generally well tolerated, results in fewer recurrences and improves overall survival. Though RT is known to cause second malignancy or chest wall sarcomas in paediatric PNETs (17), such occurrence has not been seen in adults may be due to decreased lifespan harbouring this disease. RT doses of more than 60 Gy are known to develop second cancers as compared to 45 to 60 Gy (18). Post timely treatment, the 5-year survival rate ranges from 40–80% in localized disease as compared to 0–25% in metastatic disease (19).

Pulmonary PNETs in adults are extremely rare malignancy with a dismal prognosis. The most important deterministic prognostic factor is the presence of a localized or metastatic disease at presentation. By reporting this exceedingly rare series, we recommend that the diagnosis of primary lung PNET should always be considered in patients presenting with symptoms of cough and chest pain showing a pulmonary parenchymal mass on chest imaging, small round cells on histopathology and supporting IHC differentiating from other lung pathologies so as to initiate an appropriate treatment strategy. Presently there are no definite treatment algorithms for this disease per se as most information is based on solitary case reports and small case series. Also a better understanding and interpretation of the molecular and biological mechanism of the disease process may help to device therapeutic strategies to counter this entity. More sophisticated diagnostic techniques, improved cytogenetical analysis, more novel chemotherapeutic approaches and regimens, optimal RT dosages should be devised which can improve the disease free survival, overall survival and quality of life of these patients.

The authors thank the patients for allowing them to publish the case report and use the images taken while the patients were admitted in their institute. They also like to extend their gratitude to Department of Nuclear Medicine and Department of Radiology, Army Hospital Research and Referral, New Delhi, India.

Informed Consent: Written informed consent was obtained from the patient for publication of this manuscript and any accompanying images.