Modern radiotherapy treatment planning systems (TPS) and irradiation techniques provide an increasing number of competing treatment plans, showing more accurate dose distributions in the patient. The clinical data sets for radiotherapy outcomes are also relevant and can be used to compare the radiobiological results from different plans. In recent years, the commercially available TPS have a mathematical algorithms and dose response models to objectively compare the treatment plans and make a clinical decision (1-8). They were able to compute radiobiological metrics including tumor control probability (TCP) and normal tissue complication probability (NTCP). The decision to select a particular plan for treatment is generally made by a radiation oncologist or a medical physicist based on better values of TCP and lower toxicity predicted by NTCP models. However, when moving from former algorithm to the new generations without any clinical data, it would be difficult to select the better estimated radiobiological parameters models. The purpose of this paper is to assess the shift of TCP/NTCP radiobiological outcomes in radiotherapy plans using 2D gamma (γ) topographic. Then, to test the correlation between γ passing rates (γ-rates) or (γ-mean) with ΔTCP/ΔNTCP in order to select the more clinically relevant γ to compare radiotherapy plans.

The clinical cases and treatment planning

This study is based on nine patients with lung cancer. The computed tomography (CT-scans) images of each patient were loaded into Eclipse® TPS (Varian Medical Systems, Palo Alto, CA, USA). Clinicians delineated the anatomic borders of target volumes (TV) and organs at risks (OAR) including healthy lung and spinal cord, etc. Prescription dose ranged from 50 to 66 Gy in 2 Gy per fraction. Two treatment plans were generated for each patient using the same beam’s arrangement making a change of dose distribution due to lung density correction. The dose in plan 1 was calculated using Modified Batho’s integrated with pencil beam convolution (MB-PBC) algorithm and the dose in plan 2 was recalculated with anisotropic analytical algorithm (AAA) (9-12). Figure 1 shows a flowchart from the CT acquisition to the statistical analysis to evaluate the correlation between radiobiological metrics and γ results (Figure 1). We declare that the article does not require a Statement of Ethics, since all the clinical material was anonymized CT scans images used for dosimetric repeated assay’s at a remote time from the real treatment of the patients as mentioned in clinical cases and treatment planning. Absolutely no information concerning the patients, themself, were used, so no consent were necessary. The study has been carried out in the University Hospital of Grenoble, France. 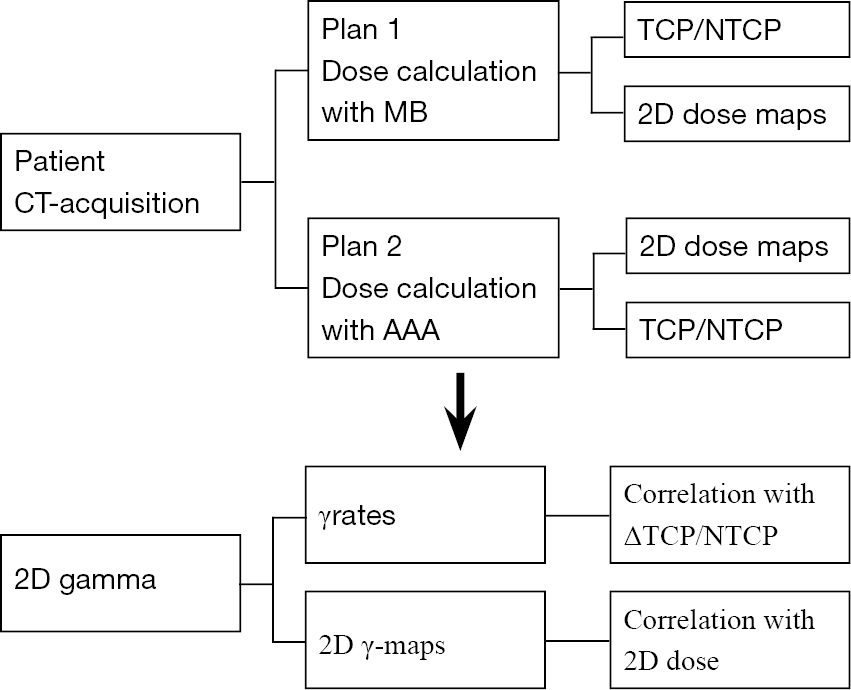 The γ index combines two criteria including the dose difference (ΔDose) in percentage and the distance-to-agreement (DTA) in millimeters (mm). An ellipse is used to determine the acceptable region, and γ≤1 represents fulfillment of the criteria (13-15). Our goal, firstly was to determine the volume ratio receiving the same irradiation, in terms of γ, including the TV and OAR. Secondly, to test if 2D γ-maps illustrate the change of TCP/NTCP. The DICOM images for each patient were exported from TPS to RIT-113® (Dosimetry System Version 5.2, Radiological Imaging Technology, Inc., CO) including the dose distributions. The dimensions were 20×20 cm2 with a resolution of 0.39 mm. The results were displayed using 2D γ topography (γ-maps). The γ-maps show the pixels with γ values greater than unity that were outside of tolerance range. To obtain γ values and generate γ-maps. The pixels with γ≤1 present the pixels from the tested plan and reference plan having the same dose distribution. The pixels with γ>1 show either an under- or overestimated dosage associated with plan 2 compared to plan 1. In order to discriminate between an over- and an under-estimated dose, a color code was attributed to the ΔDose. The difference in percentage was calculated as:

EUD was calculated as:

where “vi” is the fractional organ volume receiving a dose “Di” and “a” is a tissue specific parameter that describes the volume effect and γ50 describes the slope of the dose-response curve. TCD50 is the dose to control 50% of the tumors. The following input parameters, for the TCP model for lung tumors, were used: TCD50 =51.24, γ50 =0.83 and a=−10 (19).

NTCP: the LKB model was used for estimating NTCP on lung pneumonitis (20-23):

The parameter “m” represents the slope of the sigmoid dose response curve and “” is the dose for a complication rate of 50%. EUD is the equivalent uniform dose and is calculated as:

Bootstrap simulation method with 1,000 random samplings was used to calculate the 95% confidence interval (95% CI) for TCP and NTCP. The statistical significance difference for TCP/NTCP from plans 1 and plans 2 was assessed using the Wilcoxon signed-rank test. The significant difference is considered when P<0.05 (25). In addition, the agreement between γ-rates with ΔTCP or ΔNTCP was statistically assessed using the correlation coefficient (ρ) from Spearman’s rank test.

Figure 2 shows a 2D dose maps plotted in the axial plane using CT-scan corresponding to treatment for one patient. It can be seen in Figure 2 that the 95% isodose does not cover properly the target in plan 2, but they were extended more in the lateral direction and encompasses more normal lung tissue (Figure 2). 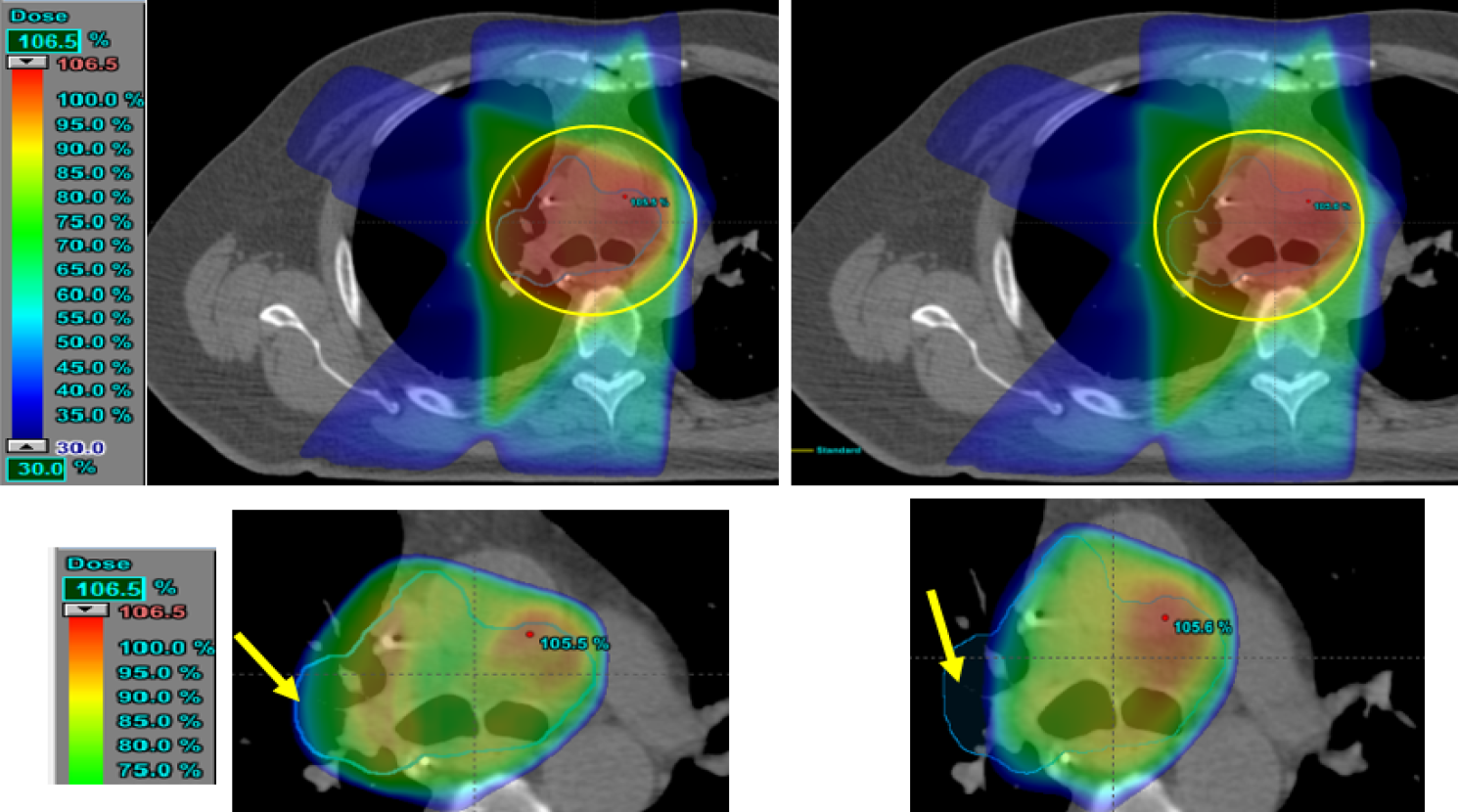 Figure 3 shows the results of γ-rates indicating the total pixels with γ>1, under and over dosed pixels for 2%/2 and 3%/3. It can be seen on Figure 3 that both methods, PBC-MB and AAA, yield much difference using 2%/2 or 3%/3 mm (Figure 3). Figure 4 shows a sample of a 2D γ-maps in the axial views illustrating the γ values and dose differences. The 2D γ-maps were calculated using DICOM images from plan 1 and plan 2 including tumor and organs at risks. The red and blue coloring indicate that γ>1 and identifying PD+ or PD− (Figure 4). 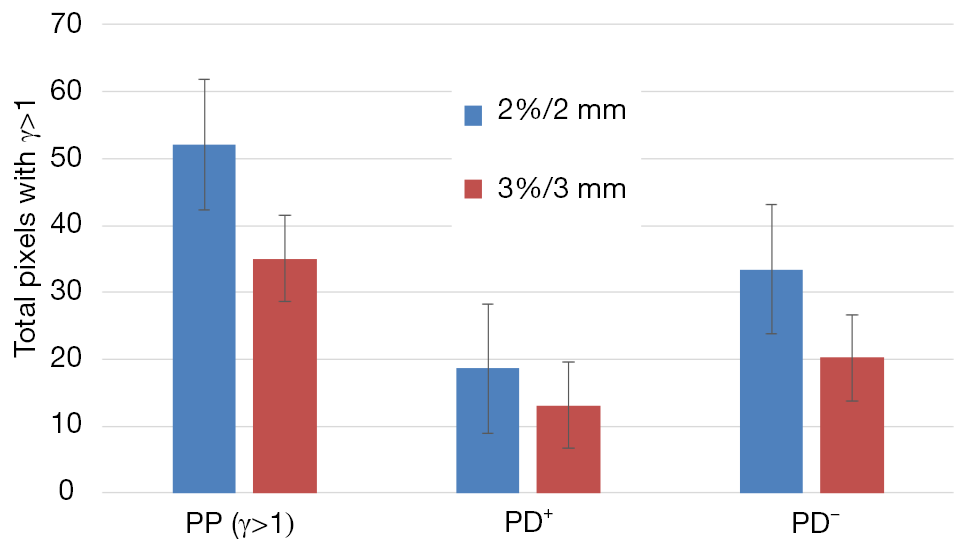 Figure 4 2D-γ maps plotted on the axial views for comparing plan 1 with plan 2. The red and blue coloring indicate that γ>1 (right panel) and are identifying as over/under estimated dose for pixels (left panel).

Figure 5 shows the results of bootstrap distributions based on 1,000 replications for TCP and NTCP with 95% CI from PBC-MB or AAA. It can be seen in Figure 5 that MB-PBC in plan 1 predicted more TCP with lower NTCP, P=0.03 (Figure 5). 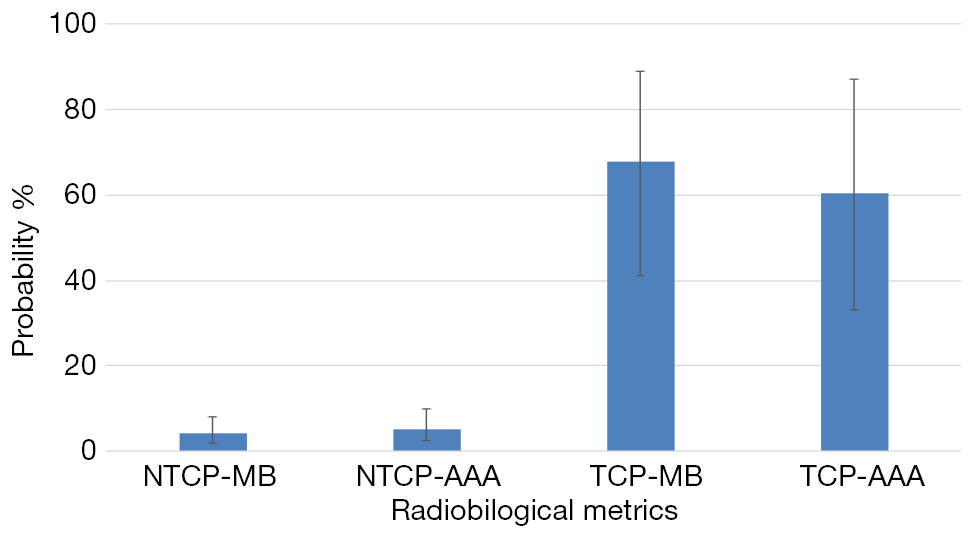 Numerous studies have evaluated the correlation between γ-rates and dose volume histogram (DVH) metrics per organ (26-28). They reported a poor correlation between γ-rates and DVH data. Recent studies applied the radiobiological metrics on quality assurance (QA) process with intensity modulated radiation therapy techniques (29-31). They reported the potential useful of biological metrics in-patient specific QA for evaluating the clinical outcome of a radiotherapy treatment. This paper highlights the discrepancies in estimating TCP/NTCP based on EUD and LKB models, respectively, for the same patient and prescribed dose using MB-PBC versus AAA. In our study firstly, we observed an overestimation of TCP by MB-PBC than AAA. On the other hand, a remarkable and significant discrepancy in estimating NTCP was observed confirming the results of several other studies (32-34). Secondly, γ-maps confirmed the observed results from CT imaging showing dose distribution. For example, it can be seen in Figure 3 that the 95% isodose does not cover the target at all in plan 2, but they were more extended in lateral direction in normal tissues. This will affect the target coverage and TCP values as well as NTCP. The observed results with 2D gamma maps confirm the results from 2D dose maps with CT-scans and alter the change of TCP/NTCP. Furthermore, the tolerance 95% of pixels with γ≤1 is not respected, predicting a significant difference between plan 1 and plan 2. The changes of dose distribution in the target and OAR should be taken into consideration to meet the dose constraints when using plan 2 to treat the patient. However, the limit of this study is that we used the physical dose, DVH, to estimate the TCP/NTCP. In addition, uncertainty to estimate the radiological outcomes can occur due to the limit of model or radiobiological parameters (n, m and ). In this study, we used the more relevant parameters published for each algorithm, PBC or AAA, to minimize the over/underestimated values and to obtain the more accurate TCP/NTCP.

In this study, the plans recalculated with AAA yielded lower TCP with more NTCP than the plans calculated by MB-PBC. The radiobiological results were predicted using 2D gamma maps indicating a significate fraction of normal tissue or target would be respectively over/under dosed. However, a weak correlation was observed between the ΔTCP/ΔNTCP and the gamma passing rates with 2%/2 or 3%/3 mm criteria.

This work has been partially funded by France HADRON (an academic non profit organization) in the frame of the ProtonShare project.