Lung cancer (LC) is the first and foremost cause of cancer death (1). LC is histologically classified in small cell lung cancer (SCLC), which is a neuroendocrine tumor, and non-small cell lung cancer (NSCLC), which arises from epithelial cells of the airways (2,3), and represents 80% of cases (1), including major subtypes such as lung adenocarcinoma (ADC), squamous cell carcinoma (SCC), and large cell carcinoma (LCC) (2,3). Currently, the trend in incidence rates of LC in women is slightly higher compared to men, and such differences could be due to an increased susceptibility to the carcinogenic effects of cigarette-smoke (CS) in women (4), and a consequence of the historical differences in tobacco use (1).

Sex steroids modulate airway and lung functioning, mainly estrogens via estrogen receptors (ERα or ERβ) (5-7), and their alterations by CS can be associated with any type of lung disease (8-11). Some reports suggest the development of NSCLC is correlated between the expression of ER (α or β) with aromatase expression and/or the epidermal growth factor receptor (EGFR) pathway (12,13). The major histologic subtype of LC in women is the ADC, which can be related to ER expression by endogenous or exogenous estrogens (4,14,15). In non-smoking women the development of some LC has been associated to mutation of EGFR by ERα expression (16), although there is also information that androgen receptor (AR) and EGFR crosstalk contributes to LC progression in men (17). ERs, and other nuclear receptors, can regulate directly or indirectly microRNAs (miRNAs), suggesting that control of miRNA expression can happen at both the transcriptional and maturation levels (18). These post-transcriptional gene regulators control many known oncogenes, and can also act on their own as either oncogenes or tumor suppressors (19). MiRNA up-regulation has been associated with genomic amplification (20,21), and miRNA down-regulation has been associated with chromosomal deletions, point mutations and aberrant promoter methylation (22-24). Many miRNAs are usually down-regulated in human LC tissues while others are up-regulated (Table 1), and seem to work differently depending on the cellular context (47). However, developing any type of LC by deregulation of miRNAs via ER-Estrogen effect is still not entirely clear (8).

miRNAs repression by cigarette smoke in the lungs

We have summarized before the results showing reduced expression levels of miRNAs in various tumors and cancer cell lines, including LC (48). The observation of a global miRNA repression in the lungs of rodents exposed to CS has also been reported (49-52). Izzotti et al. show in their results the extensive down-regulation of 126 miRNAs in lungs of rats, 4 weeks after CS exposure (49). Such a short-lasting exposure to CS resulted in reversible miRNA alterations, as miRNA down-regulation was considerably attenuated one week after smoking cessation (51). By contrast, the repression of miRNA detected in mice exposed to CS for 4 months still persisted 3 months after smoking cessation, with the progressive development of cancer in the lung, suggesting that long-lasting exposure is needed to induce irreversible miRNA alterations (51,53). In their previous published results, using the same animal model, Izzotti et al. have found that CS up-regulates gene transcription and protein expression (54,55). The authors suggested that the CS-induced down-regulation of miRNA cause oncogene activation and cell proliferation, and that the persistence of these molecular alterations is crucial to commit lung cells towards carcinogenesis (51,53). These results are supported by the study of Schembri et al., who found that most of the differentially expressed miRNAs in the human bronchial airway epithelium were down-regulated in smokers and were inversely correlated with their predicted targets (56). The same phenomenon was also observed in alveolar macrophages of smokers, where CS decreased global miRNA expression, while increased their predicted targets (57). In this later study the decrease in global miRNA expression was more pronounced in heavy smokers, suggesting that the magnitude of miRNA repression is related to the extent of smoking history (57).

Studies suggest that phytochemicals from vegetables and fruits exhibit chemopreventive activities against various types of cancer (58). Izzotti et al. (59) evaluated miRNA expression in the lungs of rats exposed to CS and treated with several cancer chemopreventive agents. Administration of the dietary agents, Phenethyl isothiocyanate (PEITC) and Indole-3-carbinol (I3C), two major components of cruciferous vegetables, attenuated the cigarette smoke-induced down-regulation of miRNA expression. In the case of the combined treatment with PEITC and I3C, they had profound effects on almost all CS—down-regulated miRNAs and their expression even exceeded the baseline situation (59). In previous studies, PEITC was also the most effective agent in inhibition of CS-related cytogenetic damage, transcriptome alterations, and lung tumorigenesis (55,60,61). Also, I3C and its condensation product 3,3’-diindolylmethane (DIM) exhibit potent antitumor effects with negligible levels of toxicity in a wide range of human cancer cells, including LC (62). Interestingly, both PEITC and I3C have proved to be anti-estrogenic compounds and inhibited ERα expression (63-66).

A similar effect was seen when mice were treated with the anti-diabetic drug Metformin (67). Exposure of mice to CS resulted in down-regulation of miRNA expression in the lungs after 10 weeks. Preneoplastic lesions in the lung were detectable after 7.5 months, along with lung tumors. Metformin effectively changed the miRNA alterations resulted from exposure to CS in the mouse lung and normalized the expression of several down-regulated miRNAs. It did not prevent smoke-induced lung tumors, however, it inhibited preneoplastic lesions in the lung (67). Intriguingly, there is evidence that Metformin is also an anti-estrogenic molecule. It was shown to inhibit ERα expression in cancer cells and to decrease estrogen levels in the serum of breast cancer female patients (68,69).

Estrogens seem to play a main role in development and progression of LC in women (70,71). ERα and ERβ are frequently expressed in lung tissue, lung tumors and LC cell lines (72), and may accelerate the metabolism of smoke related carcinogens in a dose-dependent way, as suggested by higher levels of polycyclic aromatic hydrocarbons-DNA adducts in female smokers (70).

Intergender differences were revealed in lung tumor multiplicities and in pulmonary miRNA expression after exposure of mice to CS (73,74). Females were found to be more susceptible to CS-induced miRNA down-regulation, while on the other hand; a more remarkable induced-protein expression by CS was detected in females than in males (74). These results raise the possibility that the hormone estrogen might regulate the CS-induced miRNA alterations in the lungs. Estrogens and their receptors were detected within murine lung tissue (75,76), and there is evidence for higher susceptibility of women to smoking-related LC (77-79), and that anti-estrogens can prevent lung tumorigenesis (80). Moreover, CS was found to accelerate the production of the carcinogenic estrogenic metabolites 4-OHEs in the lungs (76), and the role that estrogen-metabolizing enzymes such as Cytochrome P450 1b1 (CYP1B1) may have in the enhanced female gender-related susceptibility to tobacco has also been previously reported (75,81,82). The CS carcinogen nicotine-derived nitrosamine ketone (NNK) was shown to induce ERα via CYP1B1 activation (83), and anti-estrogens effectively inhibited NNK-induced murine lung carcinogenesis (84).

The potential role of estrogen in cigarette smoke—related miRNAs alterations

We have previously shown that estrogens cause widespread down-regulation of miRNAs, similarly to their reduced miRNA expression levels observed in different tumors and cancer cell lines (48,85). Herein we suggest that elevated levels of estrogens or their metabolites inside the lungs as a result of CS exposure [or xenoestrogens (48) within CS] cause the observed CS-induced down-regulation of miRNAs (Table 2) that potentially can lead to up-regulation of their target proto-oncogenes, cellular proliferation and lung tumor development. These alterations by estrogen can occur as the result of affecting the transcription of miRNA genes, as was shown in the case of global miRNA regulation by c-Myc (87), or at any stage of the miRNA maturation process, whether at the level of pri-miRNA processing, by affecting the microprocessor complex Drosha-DGCR8, or at the pre-miRNA processing level, by altering the activity of Dicer (Figure 1). Deletion of Dicer revokes the production of mature miRNAs being a conditional for lung tumor development as observed in a mouse model (89). Of note, it was suggested that Dicer, which was found to be inhibited by multiple stressors, is a main component of the stress-response machinery that triggers the miRNA response to carcinogens (90,91), as was observed in alveolar macrophages, where cigarette smoke-related changes in Dicer decreased miRNA expression (92). 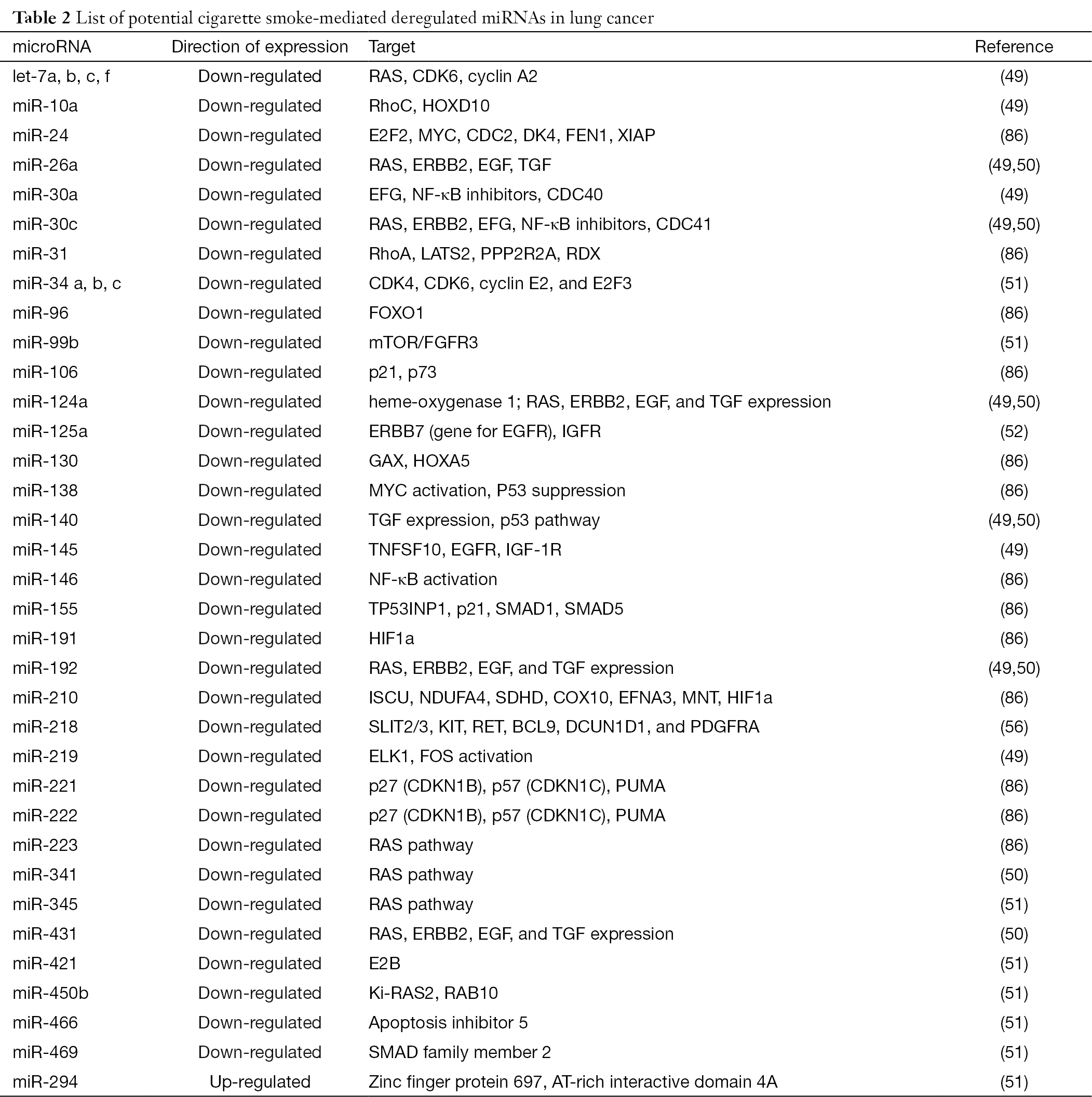 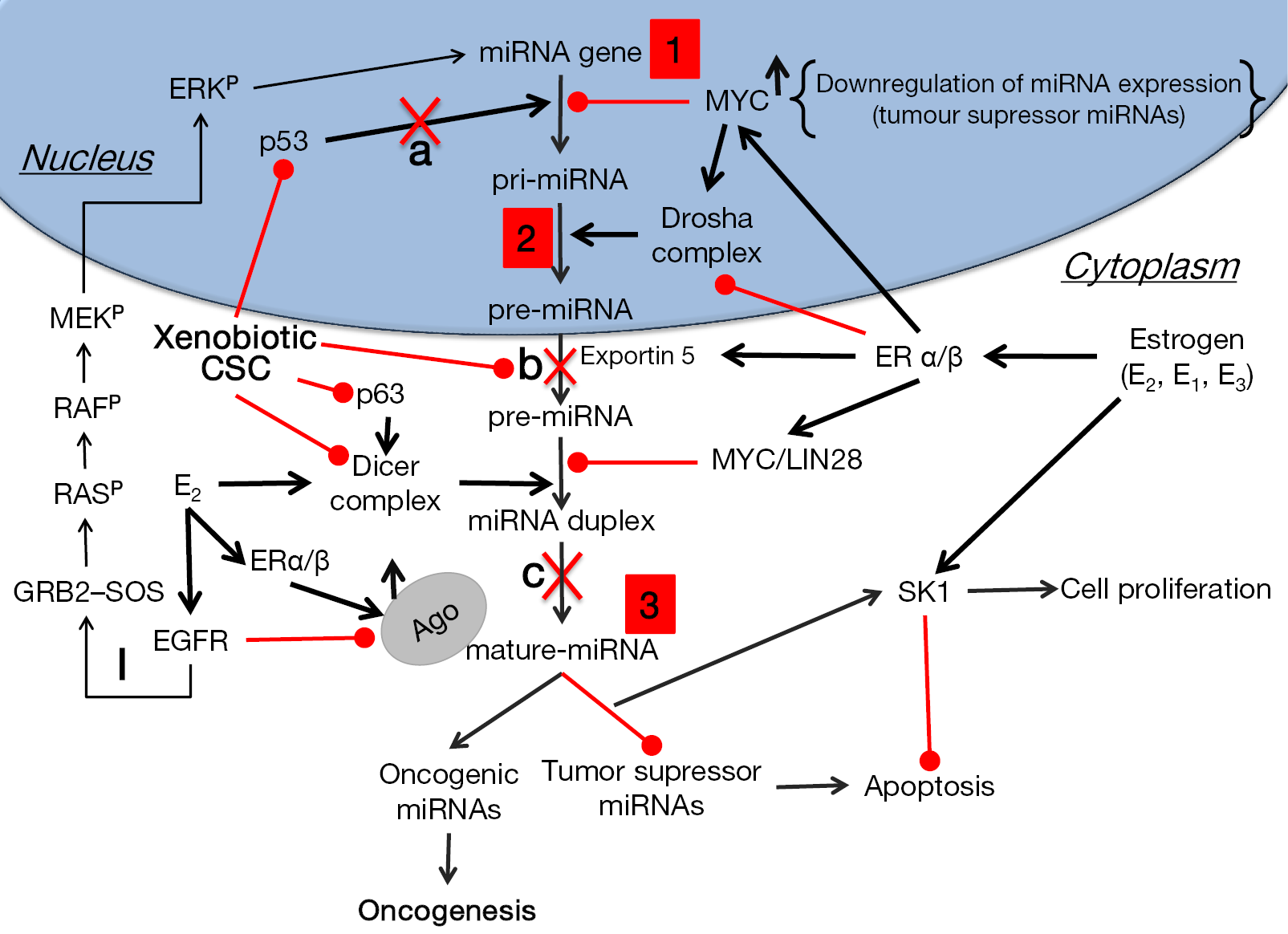 Figure 1 Disruption of miRNA biogenesis by estrogens and cigarette smoke can lead to oncogenesis. 1, altered miRNA expression levels. Epigenetic changes/mutations in miRNA genes, and in genes responsible for miRNA transcription (insertions, deletions, translocations, inversions); 2, miRNA-processing machinery disruption. Alteration in the primary sequence of the pri-miRNA & RNAase III enzymes; 3, altered mRNA translation efficiency. With point mutation in mature miRNA and mRNA target sequence. The loss of tumor suppressor miRNAs may increase the translation of oncogenes and, thus, the formation of oncogenic proteins. By contrast, up-regulation of oncogenic miRNAs may block tumor suppressor genes that further enhance tumor development; a, in response to DNA damage, the p53/miRNA interconnection modifies the expression of miRNA genes in the nucleus; b, metabolites of environmental carcinogens bind to nucleophilic sites of miRNA precursors thus forming miRNA adducts, which cannot access the catalytic pockets of DICER in cytoplasm; c, metabolites of environmental carcinogens bind to DICER in the proximity of miRNA catalytic sites thus blocking maturation of miRNA precursors; I, Activation of EGFR by ERα or β leads to phosphorylation (P) of the adaptor protein Shc, which in turn associates with the GRB2–SOS complex, activating the Ras/Raf/MAPK pathway. The activated ERK (p44/p42 MAPK) then migrates to the nucleus where it activates the transcription of genes that promote proliferation and invasion of NSCLC cells. Lung cancer cells predominantly express ERβ (88). CSC, cigarette-smoke condensate; EGFR, EGF receptor; ER, estrogen receptor; ERK, extracellular signal-regulated kinase; GRB, growth factor receptor-bound protein; SOS, Son of Sevenless.

It is worth mentioning here that EGFR was shown to suppress the maturation of tumor-suppressor-like miRNAs in response to hypoxic stress through phosphorylation of Argonaute 2 (AGO2), which in turn reduces the binding of Dicer to AGO2 and inhibits miRNA processing from precursor miRNAs to mature miRNAs (93). Rapid non-genomic estrogenic pathways are mediated by cell membrane receptors such as EGFR, and because of this crosstalk the effectiveness of EGFR tyrosine kinase inhibitors can be enhanced by anti-estrogens and aromatase inhibitors, showing antitumor effects in LC (80). However, EGFR can also provide alternative proliferation and survival stimuli to the tumors in the presence of effective inhibition of the ER pathway and therefore it has a major role in acquired endocrine therapy resistance (94).

Elucidating the molecular mechanisms of miRNA repression after exposure to CS, the target genes of the CS-down-regulated miRNAs and the potential involvement of estrogen in these alterations can have clinical implications for prevention and treatment of LC. The use of anti-estrogenic compounds, such as those found in cruciferous vegetables, can help attenuate these effects and potentially reduce the risk of LC among smokers.