Lung cancer causes about 1.4 million deaths per year world-wide (1). Non-small cell lung cancer (NSCLC) accounts for approximately 85% of lung cancer. Only a fraction of NSCLC patients are diagnosed with localized, early-stage disease, when curative-intent surgical resection is possible (2,3). After surgery, the status of regional lymph node (LN) involvement is the most important prognostic factor (4). Pathologic nodal involvement (pN1-3) connotes a poor prognosis, but also predicts the likelihood of benefit from postoperative adjuvant therapy. Multiple investigators have demonstrated the heterogeneity in survival of patients with pN0 resections, suggesting the possibility that a significant proportion of these patients are understated, probably because LN metastasis is missed (5-8). However, the survival of patients with pathologic N1 is also heterogenous, ranging from a 5-year survival of 54% to 34% in the International Association for the Study of Lung Cancer (IASLC) Lung Cancer Staging Project database (4). The reported risk of recurrence for patients with pathologic Stage IIA-IIB disease ranges from 7% to 55% (9).

The prognostic value of the LNR in N1 NSCLC remains controversial. We conducted a meta-analysis of published reports in order to evaluate the LNR as a predictor of survival and recurrence in patients with pathological N1 NSCLC.

Two of the authors (Qian Li, Ping Zhan) independently determined the eligibility of the studies retrieved from the databases and bibliographies (Figure 1). Studies eligible for inclusion in this meta-analysis met the following criteria: include early stage NSCLC patients who underwent surgical resection; include the patients harboring pathological N1 disease; provide information on survival (studies investigating response rates only were excluded); have a follow-up time not less than two years; and for multiple publications reporting on the same patient population, only the most recent, or the most complete, report was included. Discordance among reviewers was resolved by mutual agreement after further discussion. 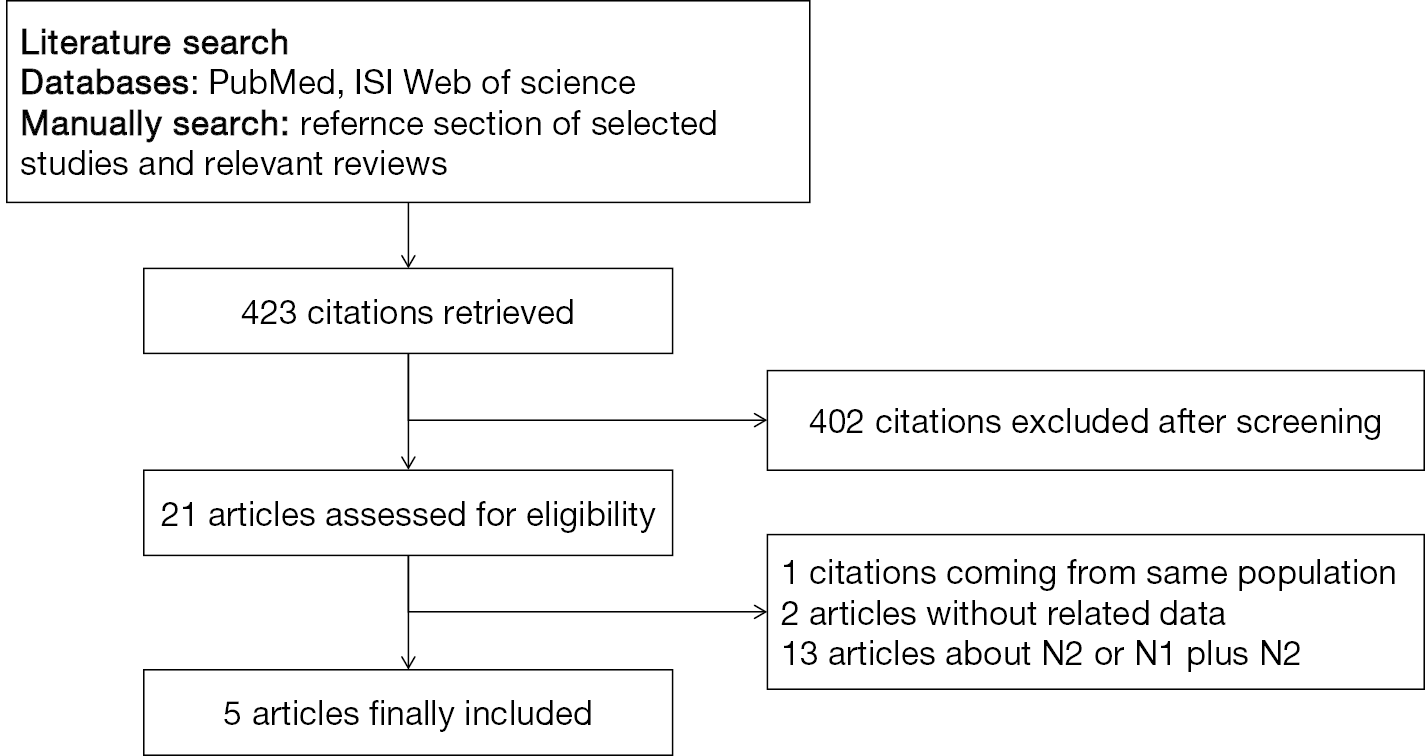 Publications were excluded if they met any of the following criteria: (I) case series, case reports, reviews and conference reports; (II) duplicate publications; (III) studies based on overlapping cohorts from the same institution.

The final articles included were assessed independently by two reviewers (Qian Li and Ping Zhan) using the “Newcastle-Ottawa Scale for Assessing the Quality of Non-Random Studies in Meta-analyses” (20). Given the variability in the quality of cohort studies found in our initial literature search, we considered studies to be of high quality if they achieved a score of six or more on the Newcastle-Ottawa Scale. Data retrieved from the reports included first author, year of publication, country, lung cancer stage, number of patients, time, and survival data (Table 1).

The hazard ratios (HRs) and their 95% confidence intervals (CIs) were combined to give the pooled effective value. Heterogeneity of the individual HRs was calculated with Chi-squared tests according to Peto’s method (21). Heterogeneity test with I2 statistic was performed. All the studies included were categorized by OS and DFS. Individual meta-analysis was conducted in each subgroup. If HRs were found to have acceptable homogeneity, a fixed effect model was used for secondary analysis; if not, a random effect model was used.

In this meta-analysis, Der Simonian Laird random effects analysis was used to estimate the effect of N1 LNR on survival (22). HR >1 indicates better survival of low N1 LNR, conversely, HR <1 implies worse survival for the group with high N1 LNR. The impact of N1 LNR on survival was considered to be statistically significant if the 95% CI did not overlap with 1. Horizontal lines represent 95% CIs. The HR point estimate was reflected in each box and the box area is proportional to the weight of the study. The diamond (and broken line) represents the overall summary estimate, with CI represented by its width. The unbroken vertical line is set at the null value (HR =1.0).

Existence of publication bias was evaluated by the methods of Begg et al. (23). Moreover, a contour-enhanced funnel plot was performed to aid in interpreting the funnel plot (24). Publication bias can lead to the asymmetry that studies appear to be missing in areas of low statistical significance, while it is less likely to cause the funnel asymmetry under the circumstance of studies missing in areas of high statistical significance. Intercept significance was determined by the t-test suggested by Egger (25). Statistical analysis was conducted using STATA version 11.0 (Stata Corporation, College Station, TX, USA).

Five studies published between 2010 and 2014 were eligible for this systematic review with meta-analysis (26-30). All reported the prognostic value of LNR in patients with pathologic N1 NSCLC. The total number of patients included was 6,130, ranging from 75 to 4,004 patients per study. The major characteristics of the five eligible publications are reported in Table 1. 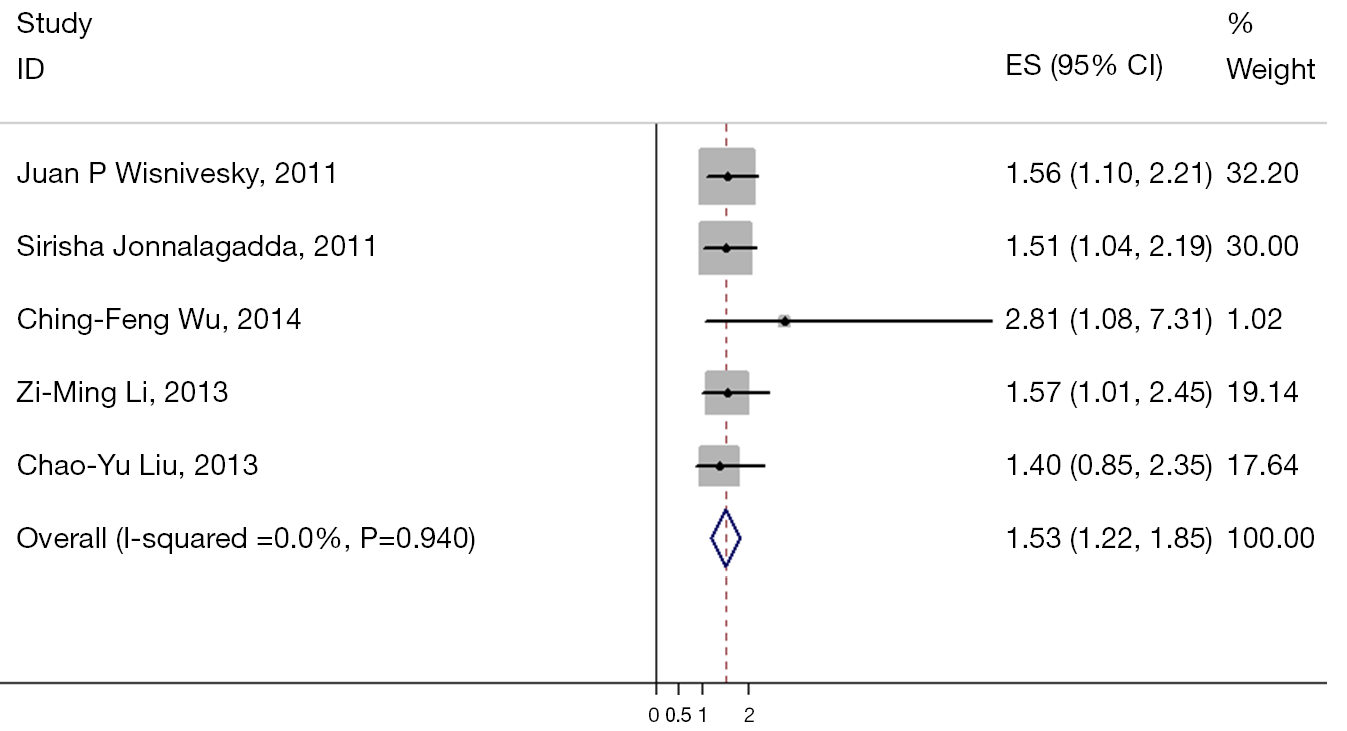 Figure 2 Meta-analysis of the association between N1 LNR and OS in patients with pathological N1 non-small cell lung cancer (NSCLC). Results are presented as the individual and summarized hazard ratios (HRs) with 95% confidence interval (CI). Each box represents the OR point estimate, and its area is proportional to the weight of the study. The diamond (and broken line) represents the overall summary estimate, with CI represented by its width. The unbroken vertical line is set at the null value (OR =1.0). LNR, lymph node ratio; OS, overall survival; OR, odds ratios. 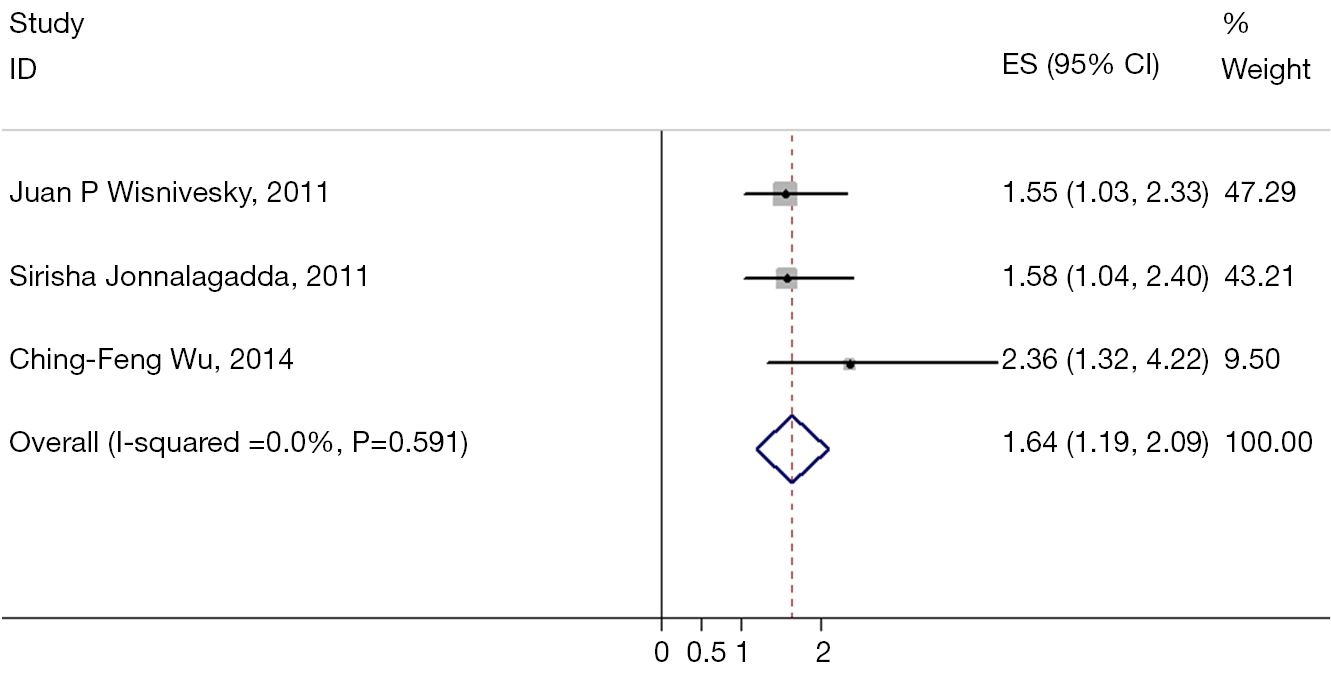 Figure 3 Meta-analysis of the association between N1 LNR and DFS in patients with pathological N1 NSCLC. Results are presented as the individual and summarized HR with 95% CI. Each box represents the OR point estimate, and its area is proportional to the weight of the study. The diamond (and broken line) represents the overall summary estimate, with CI represented by its width. The unbroken vertical line is set at the null value (OR =1.0). LNR, lymph node ratio; DFS, disease-free survival; NSCLC, non-small cell lung cancer; CI, confidence interval; OR, odds ratios. 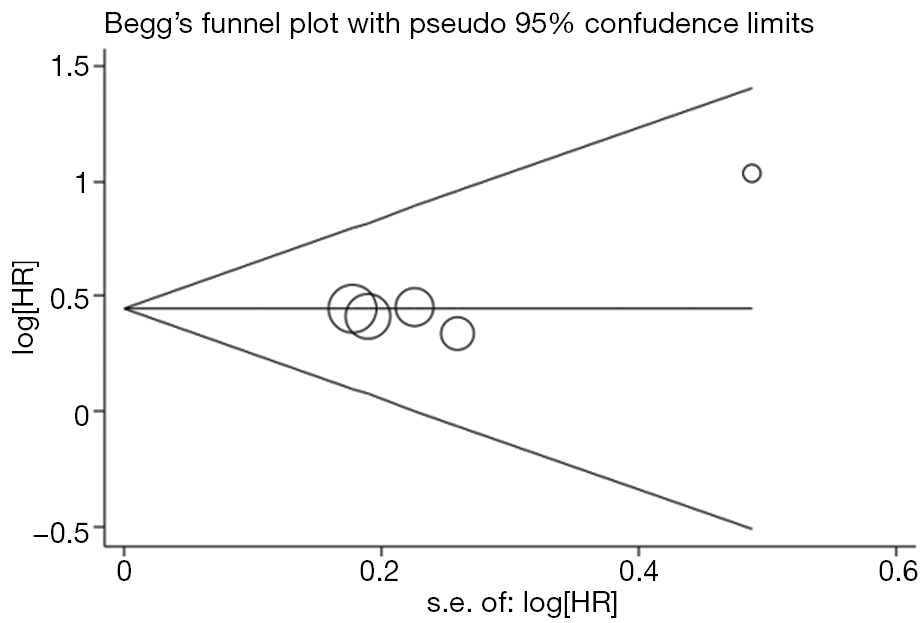 Meta-analysis of the association between N1 LNR and OS in patients with pathological N1 non-small cell lung cancer (NSCLC). Results are presented as the individual and summarized hazard ratios (HRs) with 95% confidence interval (CI). Each box represents the OR point estimate, and its area is proportional to the weight of the study. The diamond (and broken line) represents the overall summary estimate, with CI represented by its width. The unbroken vertical line is set at the null value (OR =1.0). LNR, lymph node ratio; OS, overall survival; OR, odds ratios.

Begg’s funnel plot was performed to assess publication bias in the included literature. All five eligible studies investigating NSCLC patients yielded a Begg’s test score of P=0.806. Furthermore, according to the contour-enhanced funnel plot (Figure 4), no evidence of publication bias was found in all five studies.

The status of LNs is a powerful determinant of survival in NSCLC and an essential component of the tumor, node, metastasis (TNM) classification for lung cancer (3,4). The TNM NSCLC staging system currently uses only the anatomic location of LNs to define N status. The LNR has been shown to be an important prognostic factor in several malignancies (13-19) and may overcome the limitation in the number of LNs sampled. Consistent with this notion Bria et al. showed an association between the LNR and lung cancer outcomes (12).

In this meta-analysis, we have combined five published studies including 6,130 NSCLC patients with pathologic N1 NSCLC to evaluate the prognostic value of the LNR. Our results show high N1 LNR is significantly associated with worse OS [HR 1.53 (95% CI: 1.22–1.85)] and DFS [HR 1.64 (95% CI: 1.19–2.09)]. Therefore, the LNR should be considered a predictor of survival and recurrence in patients with pathologic N1 NSCLC. The higher LNR, the worse the prognosis.

Current guidelines on lung cancer surgery do not specify the number of LNs that should be sampled for adequate staging. Several large population-based studies have suggested that more than ten LNs should be examined in the resection specimens of patients categorized as pathologic node-negative (5-8). There has been less emphasis on the need for thorough N1 nodal examination in patients with pN1 disease. However, the burden of metastatic disease, reflected by the number or proportion of LNs with metastasis, may have great prognostic significance. The total number of N1 nodes detected with metastasis is, theoretically, limited by the total number of LNs examined. Our results support using the LNR as an independent means of risk-stratifying patients with pN1, and potentially identifying patients who might benefit from more intense postoperative adjuvant therapy, might need closer surveillance, or might be targeted for enrollment into clinical trials of novel adjuvant therapies.

Potential limitations of our study include the limitation to articles published in the English language, the possibility of a publication bias, since we could not include studies that may not have been published because of negative results, and the small number of eligible studies in this meta-analysis. Despite these limitations, our study shows that a high LNR connotes a poor prognosis in patients with resected N1 NSCLC. The LNR should be considered in determining post-operative management of patients with pN1, because it provides a more accurate assessment of prognosis.

We apologize to all researchers whose relevant contributions were not cited due to space limitations.