Association of the metformin with the risk of lung cancer: a meta-analysis

Lung cancer is the leading cause of cancer related death worldwide (1) with the overall 5-year survival rate less than 17% (2). Although available treatment could improve survival in some patients, the overall success of treatment remains poor. Therefore, drug treatment that may be effective in reducing the lung cancer risk is of utmost importance and urgent efforts in prevention of lung cancer.

Diabetes mellitus (DM) is a common risk factor of cancers in different sites, including the liver, breast, pancreas and lung (3). Drug treatment of metformin in patients with DM was shown to be able to reduce overall risk of cancer and decrease mortality on some cancers (4). Studies have shown that metformin might be able to suppress the vitality of cancer cells and metformin treatment might reduce the risk of the development of tumor (5-8). A meta-analysis has demonstrated that metformin associated with reduced mortality and incidence of cancer in patients with DM (9). Some studies have shown that metformin could decrease the risk of lung cancer, but some other studies got different results (10-12). Thus, we conducted this meta-analysis to better evaluate the effect of metformin on the risk of lung cancer.

We searched all published studies in databases of PubMed, MEDLINE, EMBASE, ISI Web of Science, and Cochrane Library up to June 20, 2013. Studies evaluating the risks of lung cancer incidence among people taking metformin, compared with those not taking metformin, were identified using the following keywords: ‘metformin’ and ‘lung cancer’ or ‘lung carcinoma’ or ‘pulmonary carcinoma’. The reference lists in the studies were examined manually to further identify potentially relevant studies. We also e-mailed the authors to obtain relevant articles that did not have full-text.

The inclusion criteria of an eligible study in the meta-analysis are as follows: (I) published full-text report in English-language; (II) RCTs, cohort studies, case-control studies, and cross-sectional studies on the metformin and risk of lung cancer; (III) the studies contained sufficient published data to estimate an odds ratio (OR), hazard ratios (HRs), or RRs with a 95% CI; (IV) the comparators were defined as any treatment not including metformin. Studies were excluded based on the following criteria: (I) Publications that failed to report the metformin and risk of lung cancer; (II) insufficient information for data extraction.

Information was extracted independently by two reviewers according to the inclusion criteria listed above from all eligible publications. Disagreements were resolved by discussion between the two investigators. If no consensus could be reached, a third author was consulted to reach a final decision. The extracted information included the name of first author; journal and year of publication; characteristics of the study population (including age, sex, ethnicity); study design; and numbers of cases and controls. Study authors were contacted as needed to obtain detailed data. When more than one study was published from the same cohort, only the most recent or largest sample size study was included in the meta-analysis to avoid overlapping populations.

Response to metformin exposure was evaluated by using chi-square analysis. The statistical significance of the summary OR was determined using the Z test, in which P<0.05 was considered significant. In the meta-analysis, each adjusted relative risk was combined and the pooled RRs with the 95% CI were calculated using the random-effects model. Heterogeneity among the studies was evaluated using the χ2-based Q statistic. If heterogeneity existed, data was analyzed using a random effects model. In the absence of heterogeneity, a fixed effects model was used. Sensitivity analysis was used to examine the effect of excluding specific studies. The possibility of a publication bias, which can result from the non-publication of small studies with negative findings, was analyzed by Begg’s funnel plot and Egger’s regression test (P<0.05 was considered representative of statistically significant publication bias). Stata11 software (version 11.0; Stata Corporation, College Station, TX) was used for these calculations.

Results of the search strategy for studies are summarized in Figure 1. A total of seven publications evaluating the association between the metformin and lung cancer risk were included in the meta-analysis, involving 217,539 subjects (39,787 cases of metformin users and 177,752 controls of none metformin users) (10,12-16). Four of the six included publications described case-control studies involved British (12,13,15,16), while the remaining two publications involving Chinese descent (10,14). Every study with both male and female subjects on lung carcinoma. Characteristics of studies included in the meta-analysis are presented in Table 1. 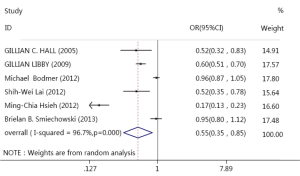 To assess the stability of our findings, sensitivity analysis was carried out by sequentially excluding each study. Statistically similar results were obtained after sequentially excluding each study, suggesting the stability of the results. Begg’s funnel plot and Egger’s test were used to assess potential publication bias. Egger’s Pr > |z|=0.15, 95% CI: –17.03-3.66; Begg’s Pr >|z|=0.57, revealed no publication bias. The results of Begg’s test were shown in Figure 3. 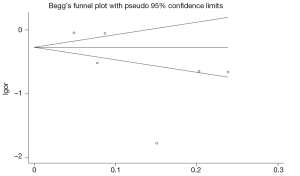 Metformin is the most commonly prescribed oral hypoglycemic agent for type II diabetic patients (17). Several observational studies have reported that the use of this drug is associated with a decreased risk of cancer (7,18,19). Our meta-analysis demonstrated that metformin is associated with a lower risk of cancer incidence of lung. Metformin can significantly reduce the risks of lung cancer. This finding support the hypothesis that metformin potentially has an anticancer effect (7).

It has been suggested that this finding may be related to metformin’s activation of the AMP-activated kinase (AMPK) path-way (17), this pathway is known to regulate cellular metabolism (20). Additionally, metformin results in inhibition of the serine—threonine kinase mammalian target of rapamycin (mTOR), an important molecular target which regulates cellular growth and proliferation, thereby interfering with cellular proliferation and oncogenesis (21).

Compared with recently published studies, our updated study is novel, and 6 studies focusing on Chinese populations and European populations. Heterogeneity is a potential problem that may affect the interpretation of the results. There is heterogeneity existed in our meta-analysis. Reasons of heterogeneity may attribute to the diversity in design, sample-sizes, methods of genotyping and inclusion criteria.

The findings in this meta-analysis should be interpreted with caution because of several limitations. Age, gender and smoking are the most important confounding factors, these factors effect lung cancer risk have been reported in many studies. One limitation of our study was that stratification by age and gender could not be effectively performed in the meta-analysis because of unavailable information on age as well as limited information on smoking in the included studies. Second, the included publications were limited to Chinese and British populations, so future work should examine other populations. Third, we selected only English-language publications in the meta-analysis. It is possible that these results would be different if others included the findings of unpublished studies or of relevant studies published in other languages.

In conclusion, the risk of developing lung cancer is lower in metformin users than in those without metformin.