Biology of invasive mucinous adenocarcinoma of the lung

Histopathology and immunohistochemical features of IMAs

By definition, IMAs consist of goblet and/or columnar tumor cells containing intracytoplasmic mucin (Figure 1), which are rarely observed in other lung adenocarcinomas (1,2). Because cytologic atypia is usually inconspicuous or absent in IMAs, definitive diagnosis of malignancy via biopsy is frequently challenging. In transbronchial biopsy, accurate targeting could be limited since most IMAs are located in the periphery of lower lobes. Moreover, submucosal mucinous glands of bronchial tissue and the tumor cells of IMA could mimic each other because of bland-looking cytomorphology and intracytoplasmic mucin. Percutaneous computer tomography (CT)-guided lung biopsy appears to be more effective way to obtain the diagnostic tissue, however biopsied specimen could be composed of acellular mucin pool only since the alveolar spaces at the tumor periphery are often filled with mucin, which may correspond to the lobar pneumonia-like area on the chest CT image. Even if tumor cells are included in the specimen, a small amount of mucinous cells with bland morphology could be insufficient to make a definitive diagnosis of malignancy. 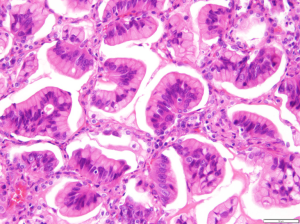 IMAs may show the same heterogeneous mixture of lepidic, acinar, papillary, micropapillary, and solid growth patterns as do INMAs (2). However, a lepidic growth pattern with microscopic skip lesions is a characteristic feature of IMAs, which is why they were formerly termed mucinous bronchioloalveolar carcinomas. Mixed invasive mucinous and non-mucinous adenocarcinomas, which are currently classified as a subcategory of IMAs by the WHO, have the histomorphologic features of both IMAs and INMAs (1). IMAs sometimes show depleted cytoplasmic mucin and aggravated cytologic atypia in areas of stromal invasion; thus, the non-mucinous components in the mixed tumors presumably arise from high-grade transformation of pre-existing mucinous components. However, further discussion and investigation are still required.

Colloid adenocarcinomas, in which abundant mucin pools replace air spaces, are also variants of lung adenocarcinomas (1). They differ from IMAs in two aspects: the mucin pools replace the underlying alveolar architecture, and scattered clusters of mucinous tumor cells are present (1). When diagnosing IMAs, the emphasis is made on intracellular mucin rather than extracellular mucin.

By immunohistochemistry, most IMAs express cytokeratin 7 (~88%) and cytokeratin 20 (~54%) (3-6). Expression rates of thyroid transcription factor-1 (TTF-1) and napsin A are variable in IMA but less than INMA, reported as approximately 40% and up to 33%, respectively (6,7). These findings support the premise that IMAs and INMAs have different cellular lineages. Previous studies categorized adenocarcinomas as terminal respiratory unit (TRU) type and non-TRU type, and IMAs are usually considered non-TRU type (8,9).

IMAs were recently shown to selectively express hepatocyte nuclear factor 4α (HNF4α) (10,11), a transcription factor present in normal and malignant gastrointestinal mucosa (12). Such selective expression could discriminate IMAs from other mucin-producing adenocarcinomas such as those harboring EGFR or ALK mutations (11,13). A subset of adenocarcinomas with ALK rearrangements extensively produces extracellular mucin along with intracytoplasmic mucin, as do IMAs. However, because these adenocarcinomas differ from IMAs in terms of mutational status and consequently treatment strategies, accurate diagnosis is important and requires a comprehensive understanding of the genetic and histologic features including immunohistochemical profiles and cytomorphology (13).

In addition to their striking histologic features, IMAs also have a distinct molecular signature. Recent high throughput analyses revealed several genetic abnormalities in IMAs including KRAS, BRAF, ERBB2, and PIK3CA mutations and NRG1, BRAF, NTRK1, ALK, RET, and ERBB4 rearrangements (14,15). KRAS mutations are the most frequent oncogenic driver mutations in IMAs (up to 86%) (14,15). However, IMAs and INMAs have different types of KRAS mutations: the most common types are G12D and G12V in IMAs and G12C in INMAs (15). G12D and G12V are most common in colorectal and pancreatobiliary carcinomas, suggesting that IMA of lung may be biologically more similar to pancreatobiliary and intestinal tract cancers. Although common in INMAs, EGFR mutations are very rare in IMAs (only 0–5%) (Figure 2) (14-17).

NRG1 fusions have been recently identified in IMAs, with an estimated frequency of 7–27% (Figure 2) (14,18,19). The fusion partners for NRG1 in IMAs thus far include CD74 (the most common), SLC3A2, and VAMP2 (14,15,18,19). IMAs also harbor, albeit at low frequencies, ERBB2 mutations, BRAF mutations, BRAF fusions, and NTRK1 fusions (14,15). Drugs selectively targeting these kinases may be useful for treating IMAs, particularly given the success of kinase inhibitors in the treatment of lung cancers with EGFR mutations or ALK rearrangements. 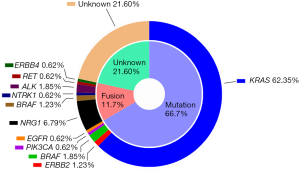 Maeda et al. and Snyder et al. reported that KRAS lung cancer mouse models with reduced expression of NKX2-1 (also known as TTF-1) developed mucinous lung tumors mimicking human IMA (20,21). Recently, Hwang et al. found that frameshift or nonsense mutations in NKX2-1 occurred in approximately 19% (4/21) of IMAs as determined via next-generation sequencing and Sanger sequencing (16). Owing to these mutations, the TTF-1 protein was not expressed, which is a common finding in IMAs. INMAs, on the other hand, express wild-type NKX2-1, whose protein product (TTF-1) suppresses the expression of FOXA3, SPDEF, and HNF4A and, consequently, the expression of the mucin-related genes MUC5AC, MUC5B, and MUC3 (22). In IMAs, loss of TTF-1 expression owing to NKX2-1 mutation would de-repress the transcription of these downstream genes, thus accounting for the presence of HNF4α (11) and MUC5AC (9) in these tumors.

Primary IMAs are often indistinguishable from metastatic adenocarcinomas of the gastrointestinal or pancreatobiliary tract as both tumor types may have KRAS mutations and produce mucin (7). Differentiation is especially challenging if these tumors, in the lung or other primary sites, express CDX-2 and have the same type of KRAS mutation (7). Furthermore, recent RNA sequencing analysis of IMAs revealed a “mucinous signature” similar to that of gastrointestinal mucinous tumors (22). However, NKX2-1 mutations appear to be specific for pulmonary IMAs (16) and if present, may help differentiating a lung primary from metastasis from the other sites.

Interestingly, IMAs rarely exhibit TP53 mutations, which may reflect the lower mutation burden of IMAs compared with that of INMAs (15). IMAs rarely express PD-L1 and predominantly occur in people who are not heavy smokers (18,22). In comparison, KRAS-mutated INMAs have a higher rate of T53 mutation and PD-L1 expression and occur mainly in heavy smokers (23-25). Hence, IMAs and INMAs differ genetically in terms of mutation burden even in the presence of KRAS mutations. Thus far, comprehensive gene expression profiling of IMAs has fallen short, perhaps because of their lower prevalence than INMA. Furthermore, previous expression data did not consider histologic subtypes in detail. However, a recent study demonstrated that IMAs has distinct expression profiles through RNA sequencing. IMAs express VTCN1/B7-H4 mRNA, whose protein product regulates an immune checkpoint and hence is a potential immunotherapy target, while they do not appreciably express PD-L1, as do INMAs (22). This finding may open new avenues of treatment using immune checkpoint inhibitors aimed at proteins other than PD-1/PD-L1.

IMAs tend to present with multicentric opacities or consolidation and multi-lobar and bilateral involvement, mimicking pneumonia (1,26). Interestingly, primary IMAs are frequently found in the lower lobes of the lungs (26).

Survival data for IMA are limited owing to its low incidence and tend to be contradictory (15,27,28). Yoshizawa et al. classified IMAs as high-grade based on a relatively high recurrence rate (76% in 5 years) (27), although the data may lack definitive prognostic significance given the small number of IMAs and the study population limited to stage I tumors in their study. The high recurrence rate could be explained by microscopic skip lesions, a characteristic feature of IMA, which is relevant to the concept of spread through airspace (STAS) of tumor cells (29). STAS is a recently described concept defined as tumor cells within air spaces in the lung parenchyma beyond the edge of the main tumor (29). Besides the conventional concept of ‘invasion’ in lung cancer—infiltration of stroma, blood vessels, or pleura—STAS is a newly recognized pattern of invasion in lung cancer, based on its anatomical characteristics that lung is an air-filled organ with supporting alveolar structures. When STAS was present in the sub-anatomically resected lung, both locoregional and distant recurrence rates were significantly increased (29). As STAS contributes to patient prognosis, especially local recurrence, even in small early-stage adenocarcinomas (29,30), the skip patterns of IMA may do likewise. In IMAs, it is hypothesized that tumor cells travel in the background of abundant alveolar mucin and become situated in the alveolar walls away from the primary lesion. In our previous study, however, the recurrence-free survival rate did not differ significantly between IMAs and other tumors (15). Interestingly, all recurrences were limited to the lungs with no extrapulmonary metastases (15). Another study showed that even patients with IMA had longer recurrence-free survival than patients with INMA (28), and recurrences after surgical resection appear to be associated with the size of non-lepidic invasive pattern, and the presence of pleural and/or vascular invasion (31). These findings suggest that IMAs may not be aggressive tumors. In support, in a study of stage IV IMAs, overall survival (OS) was significantly better in untreated IMA patients than in untreated INMA patients (26).

Patients with lung adenocarcinomas harboring EGFR mutations or ALK/ROS1 rearrangements qualify for targeted treatments with tyrosine kinase receptor inhibitors (TKIs). However, IMA patients are usually ineligible for such treatments, as well as for clinical trials of TKIs, owing to the rarity or absence of targetable mutations. Instead, most patients with advanced-stage IMAs receive non-TKI, platinum-based conventional chemotherapy (CTx), which, according to our previous study, does not improve OS relative to no treatment (26). Non-TKI CTx did, however, improve OS in INMA patients, although to a lesser extent than did TKI-based therapy in INMA patients with targetable mutation (26). These results indicate that IMA patients do not appreciably benefit from non-TKI CTx, and hence, new therapeutic approaches are required for IMAs of the lung.

Our rapidly evolving knowledge of the genetic and clinical characteristics of IMAs confirms the uniqueness of this disease among other primary lung adenocarcinomas. New findings regarding the targetable genetic alterations and clinical profiles of IMAs are anticipated to result in better patient management. Via comprehensive clinicopathologic and molecular analyses, IMAs will be more accurately diagnosed and more thoroughly investigated.

Funding: This research was supported by the Basic Science Research Program through the National Research Foundation of Korea (NRF) funded by the Ministry of Science, ICT & Future Planning (NRF-2015R1C1A1A01051935).