Epidemiology of mesothelioma in the 21st century in Europe and the United States, 40 years after restricted/banned asbestos use

Mesothelioma is a rare, but deadly form of cancer, arising in the mesothelial surfaces (1) in the pleura, peritoneal, and pericardial cavities; the most common form of mesothelioma, accounting for 65–70% of all cases, is malignant pleural mesothelioma followed by peritoneal (30%) and pericardial mesothelioma (1–2%) (2). There are three subtypes, according to the histological morphology: epithelial, sarcomatoid, and biphasic (1).

Mesothelioma has a very poor prognosis with a median survival from the time of presentation of approximately 9–12 months (3). Despite the introduction of modern therapeutic interventions, only modest changes in survival are observed over time (1). There is a well-established causal relationship between asbestos exposure and malignant mesothelioma, although the latency period can be long. Research suggests that the average latency period is approximately 40 years, although in some cases, it may be as long as 60–70 years (4-9). The association with asbestos exposure is especially strong for the pleural site, where 80% of patients report a history of asbestos exposure (2). Among asbestos highly exposed individuals, the lifetime risk of mesothelioma can vary from 5–10% to 25% (3,4,10). Increased knowledge and better regulations since the early 1980’s, with restrictions or bans on production and use of asbestos in many developed countries has led to abatement of exposure, particularly in the occupational setting. Four subsequent bans on asbestos between 1973 and 1989 in the United States (US) resulted in decreased asbestos consumption and production, followed by a decline of mesothelioma incidence and mortality rates 20 years later (11). However, despite bans, people may still be exposed to asbestos, due to its presence in several structures such as schools or public buildings, and the construction of residential areas in close proximity to former asbestos mines, factories, or soil containing natural asbestos. Thus the disease burden associated with environmental asbestos exposure remains difficult to quantify and is understudied (6,7,12). Furthermore, a ban on the use and production of asbestos has not been implemented globally; countries that have a ban instituted it at different points in time (5), making the estimate of the future mesothelioma risk in the general population uncertain.

The goal of this report is to provide an overview of asbestos use, and mesothelioma incidence and mortality in the US and Europe [defined as the 53 countries in the European region of the World Health Organization (WHO)] (13), within the context of changes in asbestos policies around the world.

This report used several publicly available data sources. Asbestos consumption (calculated as production plus imports minus exports) was assessed per capita, in 1980 and 2007, using reports from the United States Geological Survey (USGS) (14,15), with population estimates compiled by the World Bank (16). Negative values of asbestos consumption (reflecting export of storage from previous years) were treated as zero. Overall and age specific mesothelioma incidence rates (IR) [2008–2012] were extracted from the Cancer Incidence in Five Continents Volume XI (CI5 Vol. XI) data made available by the WHO and the International Agency for Research on Cancer (IARC) (17). IR over time were calculated using Surveillance, Epidemiology, and End Results (SEER) data (18) (US) and WHO C15plus data (Europe) (17,19), which includes annual incidence of selected cancers for the longest possible period. For this analysis, only registries with continuous information from 1980–2012 were included (SEER-9 Registries for the US; Denmark, France Calvados, France-Doubs, France-Isere, Germany-Saarland, Iceland, Israel, Italy-Parma, Norway, Switzerland-Geneva and UK-Scotland for Europe). Mortality rates were queried from the IARC WHO Cancer Mortality Database (20). All incident and mortality rates are age-adjusted to the world standard population (21).

Since the 1970’s, countries have banned asbestos to varying degrees, with 67 countries worldwide having a total ban, as of July 15, 2019 (22). Although the US banned some forms of asbestos in 1973, and attempted to ban most asbestos-containing products in 1989 through the Toxic Substances Control Act, the ban was overturned in 1991 (23). To this day, the US does not have a full nationwide ban on asbestos. However there are many laws regulating the use of asbestos at the federal, state, and local level (24). In Europe, individual regulations banning asbestos were passed from the 1980’s through the early 2000’s in many countries (13,22,25,26). Member states of the European Union (EU) banned five of the six types of asbestos in 1991 (amosite, crocidolite, anthophyllite, tremolite, and actinolite) and a ban prohibiting the new use of chrysotile went into effect on January 1, 2005 (27). Details of asbestos bans, by country are shown in Table 1 (13,22,25,26). 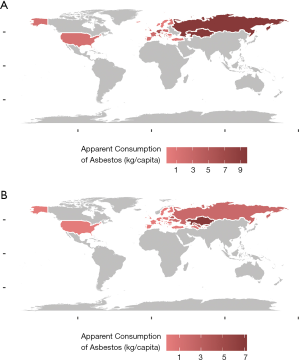 Research has shown that IR of mesothelioma are lower in women than in men, and this difference has been attributed to historical differences in occupational asbestos exposure (30,31). From 2008 to 2012, the world standardized IR (WSIR), per 100,000 persons in the US was 0.9 for males and 0.3 for females. Overall in Europe, the WSIR per 100,000 was 1.7 for males and 0.4 for females. Data is limited for nations of the former Soviet Union, Russian Federation and former Yugoslavia, but for those with data, reported WSIR for males and females were 0.5 and 0.3 (Russian Federation), 1.5 and 0.3 (Croatia), and 1.5 and 0.5 (Slovenia) per 100,000 persons. In some of the other countries with very high asbestos consumption, WSIR remain high, particularly for males versus females: 2.0 and 0.4 (Belgium), 2.0 and 0.3 (Switzerland), 1.9 and 0.3 (Denmark), 1.8 and 0.6 (Italy), and 1.6 and 0.3 (Germany) per 100,000 persons. WSIR are also very high in the Netherlands (2.8 in males and 0.4 in females), and United Kingdom (3.4 and 0.6) (Figure 2). As women generally are less likely to be occupationally exposed, the high WSIR in females observed in certain countries, such as Italy, United Kingdom, and Turkey may indicate other sources of exposure that are difficult to detect, such as higher levels of environmental exposure. The classification of environmental, non-occupational exposure to asbestos is very heterogeneous in the literature and often includes (I) areas with naturally occurring asbestos, (II) neighborhood exposure based on residence in close proximity to industrial/mining sources of asbestos, and (III) household exposure for family members of occupationally exposed people, of which the latter two are more specific exposure risk factors for females (6). Furthermore, a caveat when comparing data collected in different countries is that there may be differences in patterns of reporting for mesothelioma, misclassification in diagnosis, or lack of the medical resources required to accurately diagnose the disease. 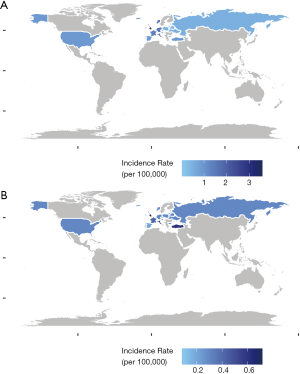 Figure 2 World standardized incidence rates of mesothelioma in the United States and Europe for (A) men and (B) women, 2008–2012. 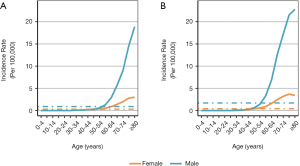 Given the long latency period of mesothelioma (approximately 40 years, on average) (4), we may now just be beginning to see the effects of asbestos bans. In the US there is no official ban in place, however attempts were made to ban asbestos as far back as 1973, and as a result general consumption was lower in 1980 in the US as compared to Europe. Over time, the IR has started to decline in the US from 1980–2016, mostly driven by a decline in the IR for males, while females have mostly held steady (Figure 4A). In Europe, rates of mesothelioma were rising sharply in the early 2000’s, and may just now be beginning to level off (Figure 4B). This may be partly due to the later introduction of asbestos bans in parts of Europe, and the higher consumption observed at least 40 years ago in many geographic areas. As overall rates have slowly fallen in the US, and risen in Europe, with steady rates for females, females now make up a larger portion of those with mesothelioma in the US than in Europe (Figure 4C). 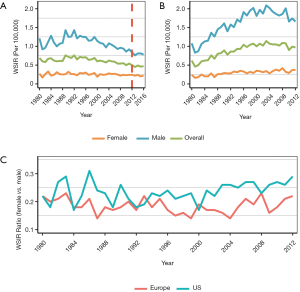 Survival rates for mesothelioma are low, with estimated median survival of 9–12 months (3). Research has shown that females have significantly better overall survival (32-34), and speculated reasons include less amount and duration of exposure (35), more favorable clinical characteristics (36,37), and protective effects of estrogen (38,39). For countries in which IR and mortality rates were available, the ratio of the mortality rate to the IR was calculated. In almost all cases, this ratio exceeds 0.5, and in many cases exceeds 0.75, indicating high mortality rates among those with mesothelioma. Generally, the ratio was lower for females (Table 2), reflecting the better survival reported by individual studies for females with all forms of mesothelioma.

Although the US recognized the dangers of asbestos exposure early and in 1973 produced the first asbestos regulation followed by a complete ban in 1989, the country currently has no nationwide ban. Many countries in Europe independently implemented partial or total asbestos bans in the 1980’s and 1990’s, while member states of the EU banned most types of asbestos in 1991, with a complete ban on all remaining types of asbestos in effect starting in 2005. However, many non-EU states implemented bans later, while some still have no ban in place. The difference in the timeframe for asbestos ban legislation in the US and Europe, combined with a latency period of decades between exposure and mesothelioma partly explains why a slight decrease in mesothelioma standardized IR is seen in the US, consistent with previous research (11), while the incidence has just started to level off in Europe. There is speculation that the observed decrease in mesothelioma incidence is slower than projected (40), and that other factors, including individual genetic susceptibility, could play a role (41).

However, observational data from cancer registries prove that legislation on asbestos use and production is an effective way to decrease occupational exposure to asbestos, and therefore, mesothelioma rates in the general population, especially in males. Current legislation is insufficient to address neighborhood asbestos exposure based on residence in close proximity to industrial/mining sources of asbestos and household asbestos exposure for family members of occupationally exposed people, as well as other sources of environmental exposure. To further decrease risk from environmental asbestos exposure, legislation for building in regions with naturally occurring asbestos should be explored. These results stress the need for a global forum to urge countries that currently don’t have an asbestos ban to start implementing appropriate legislation.

In conclusion, we report here the status of mesothelioma epidemiology in the recent years, and observe that asbestos exposure is still a burden worldwide, and legislative action is needed to obtain a complete ban. The pattern of mesothelioma is shifting from a mostly male disease to a disease that affects females as well in substantial numbers. Studies on unknown sources of asbestos exposure, of other sources of natural exposure to asbestos and asbestos-like fibers, as well as of individual genetic susceptibility to asbestos fibers are needed.