Environmental tobacco smoke is a common source of indoor air pollution worldwide (1,2), and its inhalation is known as passive smoking. Importantly, the International Agency for Research on Cancer has stated that passive smoking exposes people to the same carcinogens as active smoking, which is the leading cause of lung cancer (3). Consequently, passive smoking is considered an important cause of lung cancer in never smokers (3,4), increasing their risk of the disease (5). The biological plausibility for this association is that carcinogens and toxic substances seem to remain present in side-stream smoke and exhaled mainstream smoke (6-8).

Exposure to passive smoking continues to be a major public health concern, resulting in a large economic burden worldwide, including in China (1,9). Worldwide, it is estimated that 40% of children, 33% of males, and 35% of females identified as never smokers are exposed to passive smoking. The situation in China is complicated by having more tobacco consumers than any other country, with 316 million current smokers exposing more than 50% of never smokers to passive smoking in the home and workplace in 2015 (10). Depending on the study, estimates indicate that exposure to passive smoke in China varies from 34.1% to 72.4% (11-15). This wide range can be explained by variations in age and sex, as well as the region, source, and definition of exposure. Nevertheless, the large number of smokers necessitates that we quantify the effect of smoking on never smokers in the Chinese population to guide public health decisions.

We conducted a comprehensive search of six databases for publications in English or Chinese in accordance with the Preferred Reporting Items for Systematic Reviews and Meta-Analysis statement (17). Articles published in English were identified through the PubMed and Web of Science databases. Those published in Chinese were found through the China National Knowledge Infrastructure, Database of Chinese Scientific & Technical Periodicals, Wan Fang database, and the China Biology Medical literature database.

All databases were searched from inception to July 2019 to identify original observational studies that reported relative risks (RRs) or odds ratios (ORs) of the association between passive smoking and lung cancer in Chinese never smokers. The following search terms were used: “tobacco smoke,” “secondhand smoking,” “passive smoking,” “lung cancer,” “China,” and “Chinese.” A detailed summary of the search strategy used in each database is described in Table S1. Additionally, we manually searched the reference lists of retrieved articles to identify relevant studies that were not revealed by the database search. 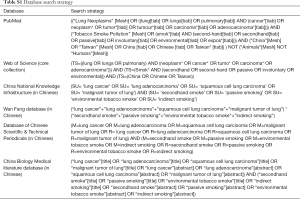 Studies were included in the systematic review if they met the following criteria: participants were never smokers from China (including Taiwan), passive smoking was assessed at an individual level, risk estimates were reported for the occurrence of primary lung cancer, and a case-control or cohort design was used. Studies were excluded for the following reasons: if they focused on a specific occupational population (e.g., miners, catering workers, textile workers, oil field workers, or those exposed to asbestos or nuclear fuel); if they included residents of Xuanwei County of Yunnan Province [residents in this area have exceptionally high exposure to residential smoky coal emissions, which is associated with a 36-fold increase in lung cancer mortality in men and a 99-fold increase in women compared with smokeless coal (18)]; if the outcome of interest was the specific mortality instead of the occurrence of lung cancer; and if the proportion of primary lung cancer cases exposed to passive smoking was unavailable to calculate PAF. In the event of multiple publications from a single study, the most recent publication was selected.

One author (Y Du) extracted data using a standardized extraction sheet (Figure S1) and two co-authors (G Sidorenkov, X Cui) reviewed the data. For each selected publication, three reviewers (Y Du, G Sidorenkov, X Cui) independently assessed the quality of included studies using the Newcastle-Ottawa Scale (NOS) (19). The NOS is a methodological assessment tool recommended for use with cohort and case-control studies that uses a star-based scale ranging from 0 to 9 stars (20). Quality is assessed on three domains in the NOS: (I) study group selection; (II) group comparability; and (III) exposure/outcome reliability. The comparability assessment needed to be further specified based on the topic of the analysis, which was done in a consensus meeting among the authors before assessing the studies. It was agreed that one star would be given when the comparison between cases and controls was adjusted for age and sex. Another star was given when there was adjustment for at least one of the following confounders: radon, asbestos, family history of lung cancer and cooking smoke. Any disagreements were settled by consensus or were adjudicated by a third reviewer (GHdB/SL). Studies assessed as zero points for the comparability domain were excluded from the meta-analysis. 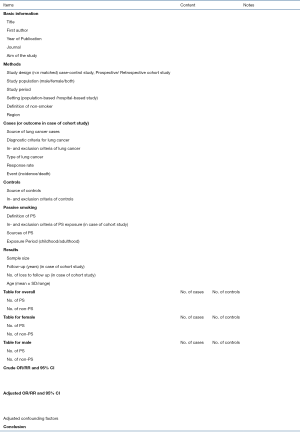 The first step involved a meta-analysis of the OR and corresponding 95% confidence intervals (CIs), using a random effects model. We performed I2 tests and considered data to have heterogeneity when the I2 value was >50%. For studies that reported both crude and adjusted OR estimates, the adjusted risk estimate was selected for the meta-analysis. For studies that reported stratified ORs, the overall OR was calculated by combing the stratified ORs and using them in the subgroup PAF calculations, as applicable. For studies that did not report OR directly, but where the necessary data were available, we performed the OR calculation ourselves. The derivation of the ORs used in the study, together with their matched/adjusted factors in each included study, are presented in Table S2. To evaluate the robustness of the pooled ORs, we performed sensitivity analyses in which each study was sequentially removed and the OR was recalculated. Publication bias was tested using Begg’s test and a funnel plot. 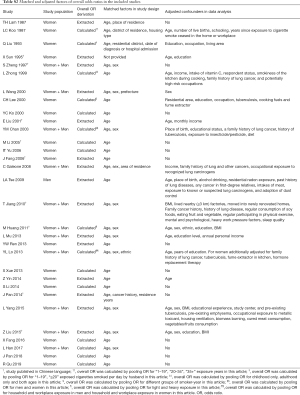 The next step involved calculating the point estimate of PAF based on the pooled proportion of exposed cases and the pooled OR (16,21), using the following formula:

where pc is the percentage of cases exposed in the combined population.

RR was replaced with the OR (as an approximation of the RR) for case-control studies (16). The 95% CI of the PAF was then estimated according to a formula described elsewhere, in which the variance of both the OR and the exposed cases were considered (21):

The variance of PAF is

The corresponding limits of ln(1-PAF) are .

Eligible studies and their characteristics

We identified 2,359 articles from the six databases we searched and retrieved 296 papers for full-text review; of these, 31 case-control studies [22 published in English (22-43) and 9 published in Chinese (44-52)] were eligible for inclusion (Figure 1). No cohort studies fulfilled the inclusion criteria. The details of all included studies are summarized in Table 1. 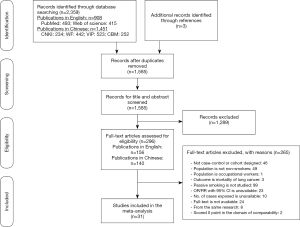 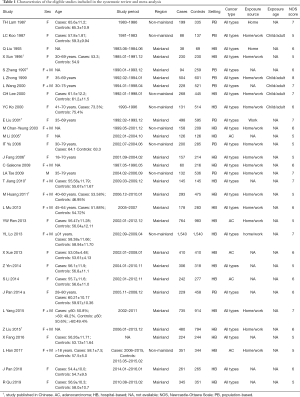 The average methodological quality score was 6.0±0.9, ranging from 5 to 8 (≥7 for 9 studies). Details of the quality assessment are presented in Table S3. Concerning exposure ascertainment, 29 studies had no blinding to the case/control status during interviews. Notably, the definitions of never smoker and passive smoking varied across the studies, as presented in Table S4. 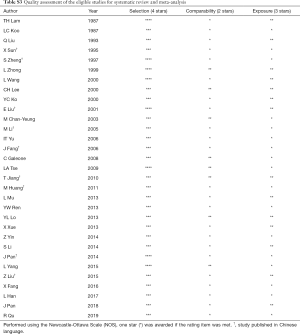 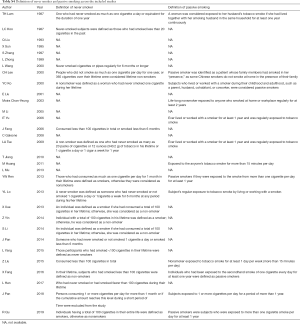 Among the eligible studies, 9,614 cases of lung cancer and 13,093 controls were included, with exposure to passive smoking in 5,923 (61.6%) and 7,089 (54.1%), respectively. Overall, 11 studies included both men and women, 19 studies included only women, and 1 study included only men. The age of the population of interest in the included studies varied and was presented either as mean and standard deviation or percentage, as shown in Table 1. Most studies (n=22) were conducted in mainland China. The control groups were recruited from a hospital in 22 studies, but they were population-based in the remaining 9 studies. All but 5 studies, which were limited to lung adenocarcinoma, included all types of lung cancer. Of the 20 studies that provided data on the source of passive smoking, 18 considered both home and work exposure, 2 considered home exposure only, and 1 considered work exposure only.

The PAF for lung cancer due to passive smoking 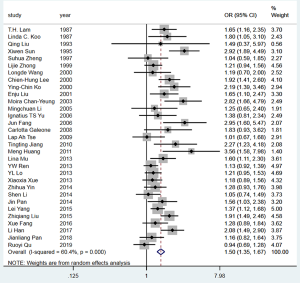 Figure 2 Forest plot of the random effects meta-analysis for the association between passive smoking and lung cancer among never smokers in China. CI, confidence interval; OR, odds ratio. 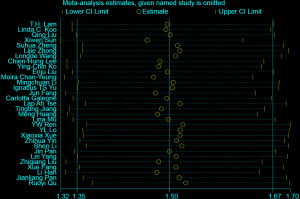 Figure S2 Sensitivity analysis for the association between passive smoking and lung cancer risk among never smokers in China. 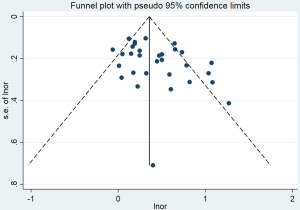 Figure S3 Funnel plot of publication for the association between passive smoking and lung cancer risk among never smokers in China. 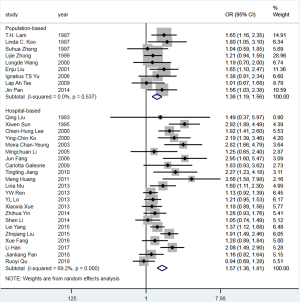 Figure 3 Forest plot of the random effects meta-analysis for the association between passive smoking and lung cancer among never smokers in China by study setting. CI, confidence interval; OR, odds ratio. 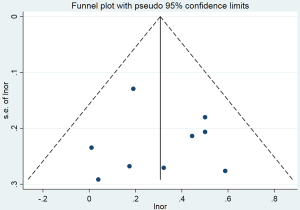 Figure S4 Funnel plot of possible publication bias in population-based studies. Data are for the association between passive smoking and lung cancer risk among never smokers in China. 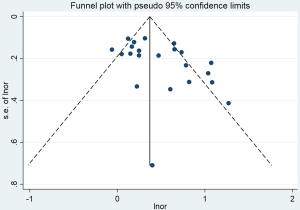 Figure S5 Funnel plot of possible publication bias in hospital-based studies. Data are for the association between passive smoking and lung cancer risk among never smokers in China. 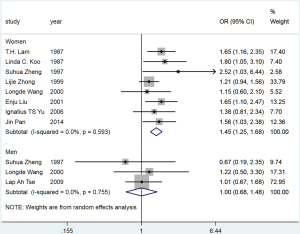 Figure S6 Forest plot of the random effects meta-analysis in population-based studies. Data are for the association between passive smoking and lung cancer risk among never smokers for women and men in China. CI, confidence interval; OR, odds ratio.

Figure S7 Forest plot of the random effects meta-analysis in hospital-based studies. Data are for the association between passive smoking and lung cancer risk among never smokers for women and men in China. CI, confidence interval; OR, odds ratio.

The PAF for lung cancer due to passive smoking in women, based on exposure source 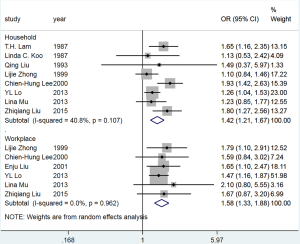 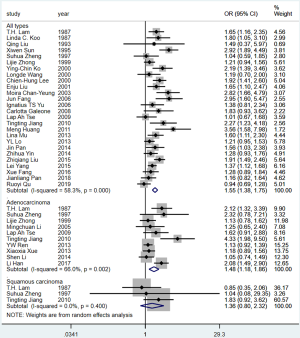 The proportion of lung cancer cases that could be prevented among women by stopping passive smoking was 18% in this study, which was lower than the 24% reported in a previous estimate from 2008 (54). However, the RR of passive smoking for lung cancer was comparable with that in the previous publication, implying that there has been an overall decrease in the prevalence of passive smoking. This could be because China officially signed the Framework Convention on Tobacco Control in 2003 (55), which has resulted in several smoke-free policies being implemented (56-58). Additional positive effects on lung cancer occurrence can be expected from these measures because smoking rates decline slowly. The risk of lung cancer in exposed individuals may therefore decline further over time as exposure to passive smoking reduces.

Estimating the PAF in a systematic review and meta-analysis is an alternative approach when data on exposure rates are not available from national surveys. However, there are some limitations in the study. First, we used the OR from case-control studies as an approximation of the RR because there were no eligible cohort studies. Although this is not ideal, the OR from a case-control study is considered a valid substitute for the RR from a cohort study when a disease is uncommon (16). Second, we could not control for the effects of cooking fumes when estimating the PAF of lung cancer due to passive smoking in the home, which might have resulted in an overestimation of the PAF. Third, most of the studies had no blinding to the case/control status during interview, indicating a possible high risk of information or misclassification bias. Fourth, the PAF for male never smokers could not be estimated because there were insufficient population-based studies.

Funding: Y Du is grateful for financial support from the China Scholarship Council (No. 201708340072). This work was supported by the Ministry of Science and Technology of the People’s Republic of China, National Key R&D Program of China (grant number: 2016YFE0103000), and the Royal Netherlands Academy of Arts and Sciences (grant number: PSA_SA_BD_01).

Conflicts of Interest: All authors have completed the ICMJE uniform disclosure form (available at http://dx.doi.org/10.21037/tlcr.2020.02.11). The authors have no conflicts of interest to declare.