Lung cancer is the leading cause of cancer death worldwide (1). It is traditionally considered to be a disease prevalent among the elderly, male and smokers, and is usually diagnosed at a late and incurable stage. According to the IASLC lung cancer staging project, the 5-year survival rate for stage IA patients is 77–92%, whereas the 5-year survival rate for stage IV patients is only 0–10% (2). Because lung cancer is curable by surgical resection at an early stage, it was hypothesized that early detection by screening may reduce lung cancer mortality. This hypothesis was verified by the National Lung Screening Trial (NLST) (3). However, the application of LDCT and the results of screening between China and Western countries are quite different. In this review, we discuss the “who pays, who receives” issue, the results of LDCT screening and the concerns about overdiagnosis and overtreatment from the Chinese perspective. We specifically call for global attention to clarify the etiology of lung cancer among young female non-smokers.

Chest radiography screening showed no reduction in lung cancer mortality compared to usual care in the Prostate, Lung, Colorectal, and Ovarian (PLCO) cancer screening trial (4). However, LDCT is a much more sensitive imaging test. The International Early Lung Cancer Action Project (I-ELCAP) showed most (85%) of the low-dose computed tomography (LDCT) detected lung cancers were clinical stage I and had a good survival rate following surgical resection (5). The National Lung Screening Trial (NLST) revealed that compared to the radiography group, LDCT screening reduced lung cancer mortality by 20.0% (3). In the NLST trial, high-risk participants eligible for LDCT screening were defined as 55–74 years old and had at least 30 pack-year histories of smoking (3). Recently, the Dutch Belgian randomized Lung Cancer Screening (NELSON) trial showed that the rate ratio for death from lung cancer at 10 years was 0.76 in the screening group as compared with the control group among men. The rate ratio for death from lung cancer among women was 0.67 (6).

“Who pays, who receives” LDCT screening in China

In the United States (US), after the positive findings of the NLST trial, the US Preventive Services Task Force recommended “annual screening for lung cancer with LDCT in adults ages 55 to 80 years who have a 30 pack-year smoking history and currently smoke or have quit within the past 15 years” in December 2013. Coverage of lung cancer screening in the US was initiated in the first quarter of 2015. According to the decision memo of the Centers for Medicare & Medicaid Services (CMS), the beneficiary eligibility criteria for LDCT lung cancer screening included age 55–77 years, asymptomatic, have ≥30 pack-year smoking and ≤15 years smoking cessation (7). In China, however, regarding the issue of “who pays and who receives” LDCT screening, there is a totally different story. Along with the publication of the NLST trial, LDCT screening is becoming increasingly popular in some regions of China. In China, LDCT is very cheap (about 30 US dollars) and can be covered by healthcare insurance. Moreover, this examination can usually be conducted within the same day of appointment. As a result, LDCT is popular not only in the “high-risk” population, but also in the traditionally “low-risk” population. Many employers, including companies, hospitals, schools and government organizations, offer LDCT to their employees as a part of regular annual health examination. Even without the reimbursement, most people can afford the expense since LDCT is both cheap and easy to access. Therefore, in China, “who pays” is not an issue. For people who receive LDCT, there is no limit of age or smoking history, and they do not have to be participants to a screening program. There are initiatives from the government to conduct population based screening programs. However, in China, there is still no clear evidence showing what kind of persons can benefit from LDCT screening.

Results of LDCT screening in China

The results of LDCT screening in China are also quite different from that in Western countries. The first difference is the “high-risk” population. We recently conducted two studies on the results of LDCT screening in China. The first study is the LDCT screening in 11,332 high-risk individuals in selected communities of Minhang, Shanghai from August 2013 to August 2014. The incidence of primary lung cancer was 336.97 cases per 100,000 person-years among the non-smoking participants, compared to the 159.06 cases per 100,000 person-years among the smoking participants (8). This study leads to the conclusion that it is not reasonable to exclude non-smokers from LDCT screening in China. The second study is the results of LDCT as a regular health examination among 8,392 hospital employees from six hospitals in different regions of China (three in Shanghai, one in Shandong, one in Jiangsu and one in Guangdong) in 2012–2018 (9). LDCT detected lung cancer (with pathologic confirmation) in a total of 179 hospital employees. The lung cancer detection rate was significantly higher in female than male (2.5% vs. 1.3%, P=0.001). There was also a trend toward a higher detection rate in non-smokers than smokers (2.2% vs. 1.4%, P=0.092). The lung cancer detection rate in the “age ≤40 years” group, the “40< age ≤55 years” group and the “age >55 years” group was 1.0%, 2.6% and 2.9%, respectively (9). LDCT detected lung cancer in a significant proportion of young, female and non-smokers. Data released by the Shanghai Municipal Center for Disease Control and Prevention also supported these findings (10). There is a significantly rising lung cancer incidence in women after the introduction of LDCT screening (10). In Shanghai, lung cancer incidence among men did not change significantly between 2005 and 2014 (average annual percent change (APC) =0.76%; P=0.127), whereas the incidence of lung cancer among women increased significantly (APC: 5.50%; P=0.001). When stratified according to age, lung cancer incidence increased significantly in all the age groups between 30 and 64 years old among women (10). 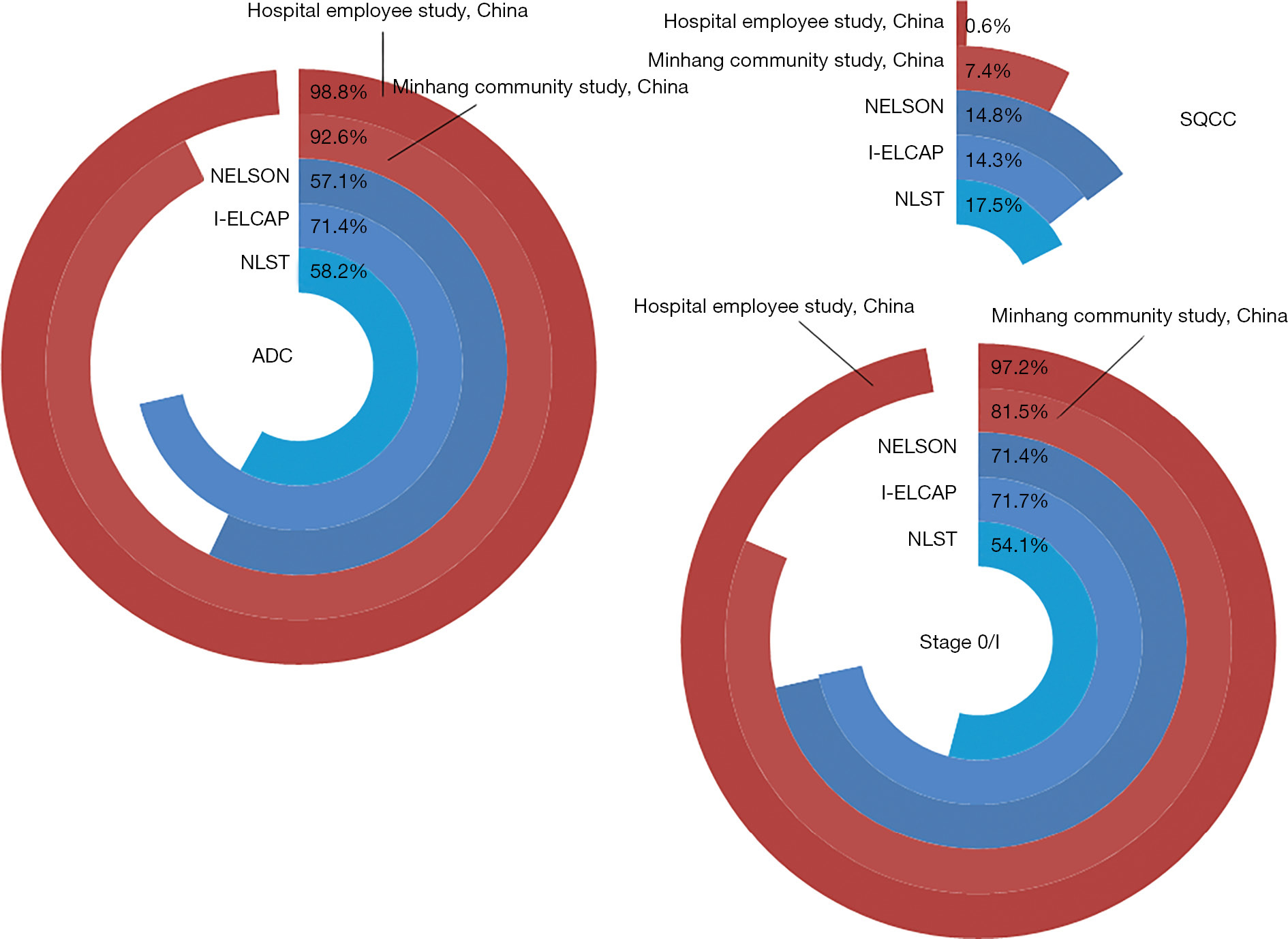 A major concern of the LDCT detected early-stage lung cancer is overdiagnosis which is defined as a diagnosis of lung cancer that would not otherwise have been diagnosed in a person’s lifetime without screening. Overdiagnosis can lead to overtreatment that is not necessary. There are several important points to minimize overdiagnosis and overtreatment. First, for newly detected small ground glass opacity (GGO) lesions, there should be a period of follow-up. Since benign GGO lesions can disappear during follow-up, a period of follow-up is an effective way to reduce unnecessary surgery to benign lesions. We routinely recommend 4–6 months of follow-up for patients with newly identified small GGO lesions. A flow chart describing the approaches to manage LDCT-detected small GGO lesions was established in our center (9). The rate of benign lesions among all the surgically resected lung lesions is below 10% in FUSCC. Second, after a period of follow-up, for persistent GGO lesions, when to intervene is another issue. In our clinical practice, we have found some LDCT detected small GGO nodules progressed and required more extensive treatment than before. However, some nodules can be stable for a long time, even they are malignant. To reliably distinguish the aggressive tumors from the indolent tumors is crucial to determine when to intervene. Third, the currently recommended surgical resection for early-stage lung cancer, lobectomy plus systematic lymph node dissection, is an “overtreatment” for many LDCT-detected lung cancers. We believe that the size/number of surgical incisions, the extent of resection and the systemic damage by surgery should be balanced to improve patient’s survival and quality of life (13). We found intraoperative frozen section can precisely differentiate invasive ADC from minimally invasive adenocarcinoma (MIA)/adenocarcinoma in situ (AIS). For patients for MIA/AIS, we performed sublobar resection without lymph node dissection. The 5-year recurrence-free survival rate was 100% for these patients (14). Our study was “an important step toward personalization of surgical care for early-stage lung cancer” (15), and was included in the European Society for Medical Oncology (ESMO) guideline (16). In addition, through retrospective and prospective studies, we found preoperative bone scanning, bronchoscopy or brain magnetic resonance imaging was not necessary for small peripheral GGO-featured lung cancer patients (17-19).

Now we have a very important question: why do these young female non-smokers, who are traditionally considered as “low-risk” population, have lung cancer? The correlation between tobacco smoking and lung cancer has long been discovered (20). After the identification of tobacco smoking as a major risk factor and the following tobacco control programs, the lung cancer incidence was declining in several Western countries including the US and the UK (1). Therefore, our results should arouse global attention to clarify the etiology of lung cancer in young female non-smokers.

According to the Chinese Center for Disease Control and Prevention, the smoking prevalence in China is declining (26.6% of people 15 years or older in 2018). However, there are other environmental risk factors than smoking, such as second-hand exposure to cigarette smoke, kitchen fume contact, asbestos, radon and air pollution. Exposure to second-hand smoke is not likely to play a major role since smoking bans in public places are increasingly strict. Especially for these hospital employees, they had very little exposure to second-hand smoke at home or working places. Kitchen fume contact is supposed to be decreasing due to the improved kitchen ventilation. Moreover, many young women nowadays cook very seldomly. Asbestos or radon exposure is only limited to a small population, and therefore should not be major factors. Working in hospital is also not likely to be a risk factor. Lung cancer was detected in two young (21 and 22 years old, respectively) nurses of FUSCC who had just graduated from nursing school. Air pollution was suspected to be responsible for the rising lung cancer incidence in China. Researches have revealed a positive correlation between PM 2.5 and lung cancer incidence and mortality in China (21,22). However, it is still difficult to explain why lung cancer incidence is rising only in women. More large-scale studies are still needed to elucidate the role of air pollution.

Another important risk factor that needs to be considered is genetic susceptibility. Genome-wide association studies (GWAS) identified single nucleotide polymorphism (SNP) markers that were associated with the risk of lung cancer. For example, Hsiung and colleagues showed that the genetic variation in the CLPTM1L-TERT locus of chromosome 5p15.33 is associated with the risk of lung ADC in non-smoking women (23). However, genetic variants identified in the GWASs are common alleles with low penetrance, which limits their clinical implications. Other researchers tried to identify germline mutations predisposing to lung cancer through pedigree studies. Currently identified lung ADC-predisposing germline mutations include EGFR T790M (24), EGFR V843I (25), HER2 G660D (26) and YAP1 R331W (27). However, the prevalence of these germline mutations is very low in the general population. At least so far, germline mutations are only found to be responsible for a small proportion of lung cancer patients.

Currently, both the environmental risk factors and genetic susceptibility remain largely unknown for young female non-smoking lung cancer patients. In the future, epidemiologists, doctors, geneticists and basic researchers should work together to address this issue.

In China, LDCT screening is very cheap and easy to access, and is not limited to traditionally “high-risk” population. The results of LDCT screening in China are very different from that in Western countries. LDCT detected lung cancer in a significant proportion of young, female and non-smokers in China. There is also a higher proportion of early-stage disease among LDCT-detected lung cancer in China. There are several important points to reduce overdiagnosis and overtreatment. Finally, we call the global attention to clarify the etiology of lung cancer in young female non-smokers.

Conflicts of Interest: Both authors have completed the ICMJE uniform disclosure form (available at http://dx.doi.org/10.21037/tlcr.2020.03.16). The series “Lung cancer screening” was commissioned by the editorial office without any funding or sponsorship. The authors have no other conflicts of interest to declare.

Ethical Statement: The authors are accountable for all aspects of the work in ensuring the questions related to the accuracy or integrity of any part of the work are appropriately investigated and resolved.