For patients with inoperable stage III non-small cell lung cancer (NSCLC), concurrent chemoradiotherapy (CRT) followed by consolidation therapy with PD-L1 inhibition is the current standard of care (1). Exact T- and N-stage definition is very important for the planning of multimodal treatment and patient prognosis. Also an assessment tool for functional impairment with Eastern cooperative oncology group (ECOG) is a metric to characterize patient prognosis (2). Previous prognostic scores have been proposed (3,4) and one of such scores was developed by our group from patient- and tumor-related factors (age, pack years, tumor-associated atelectasis and histology) and predicted prognosis in inoperable stage III NSCLC patients (5).

Whole body 18F-FDG-positron emission tomography (PET)/computed tomography (CT) is an established and validated diagnostic tool for initial staging in stage III NSCLC. FDG uptake is an indicator of tumor vitality that is usually measured using standardized uptake values (SUV), metabolic tumor volume (MTV) and total lesion glycolysis (TLG). FDG uptake intensity correlated with overall survival in different studies (6,7). Our previous data showed that an initial primary tumor (PT) MTV and its changes in the course and after completion of CRT has a prognostic impact in inoperable stage III NSCLC (8). Moreover, in a meta-analysis by Na et al., high pre-treatment SUVmax_PT was associated with poor outcome (9). Other studies have also shown a correlation between tumor histology and the SUV values in locally-advanced NSCLC (10,11).

The aim of present single-center analysis was to evaluate the impact of pre-treatment SUVmax_PT and range between two most distant PET-positive (SUV ≥2.5) lymph nodes in two directions (vertical and horizontal) on patient survival in a real-life inoperable stage III cohort. Hence, a new PET/CT score that combines these parameters was proposed and validated. To the best of our knowledge, no previous studies have combined multiple imaging parameters.

A total of 99 consecutive patients with locally advanced NSCLC stage IIIA–B (UICC 7th edition) between 2011 and 2016, treated with curative intent CRT were enrolled. All patients received initial staging including bronchoscopy with biopsy, contrast-enhanced CT or MRI of the brain. Histology yielded 49 adenocarcinomas (49.5%) and 50 non-adenocarcinomas (50.5%). Patients with distance metastasis on PET/CT and poor performance status (ECOG >1) were excluded from this analysis. This study was approved by the institutional review board.

All patients received platinum-based CRT (sequentially or concurrently). Various chemotherapy regimens were allowed. The majority of the cohort was treated with a combination of cisplatin 20 mg/m2 body surface area on days 1–4 and 50 mg/m2 oral vinorelbine on days 1, 8, 15 for 2 cycles.

A planning PET/CT was performed in the treatment position for improved target volume definition (tumor and affected lymph node regions). The description of target volume definition was previously published (5,12). Forty patients (40.4%) were treated with three-dimensional conformal radiotherapy, whereas 59 patients (59.6%) with intensity-modulated radiotherapy (IMRT). Treatment was delivered by a multi-energy linear accelerator. Image-guidance was performed with cone-beam CT several times a week.

Lymph nodes with SUVmax ≥2.5 were indicated for malignant potential (13,14) and selected for the measurement of the two widest involved lymph nodes in selected CT layers with optimal imaging of lymph nodes in both directions. A-line was defined as the vertical distance of the 2 most distant involved pet-positive lymph nodes with SUVmax ≥2.5. B-line consisted of the horizontal distance of the 2 most distant affected lymph nodes (Figure 1). The measurement was performed by two experienced radiation oncologists and nuclear medicine specialists. 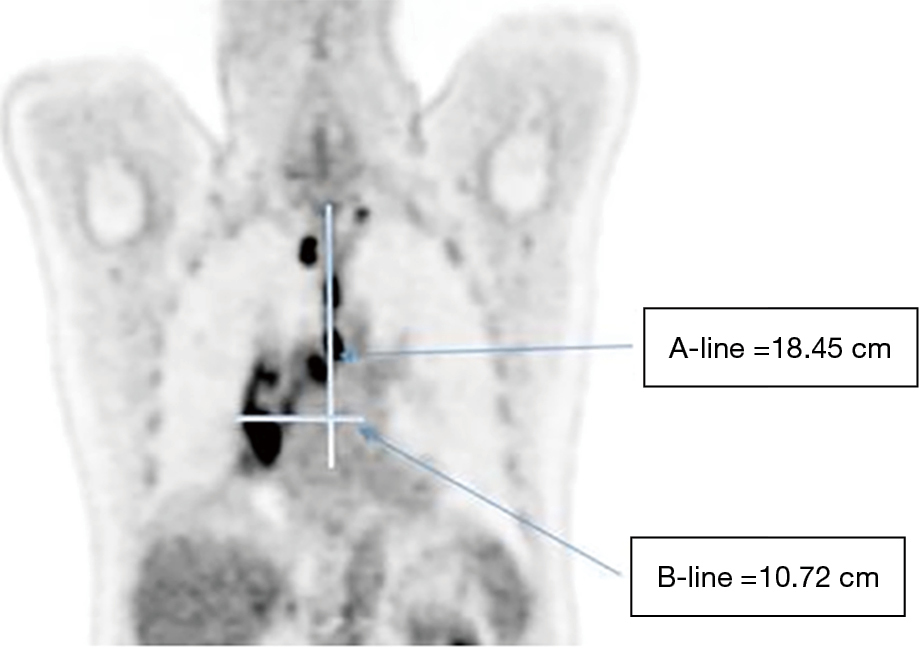 Figure 1 Definition of A- and B-line.

Statistical analysis was performed using software of SPSS statistics 25 (IBM, New York, USA). The median follow-up achieved 17.2 (range: 2.2–92.1) months. Kaplan-Meier analyses were used to compare survival curves for the subgroups according to the SUVmax, vertical A- and horizontal B-lines. A receiver-operating characteristic (ROC) curve analysis was performed to define the best cut-off of SUVmax as well as vertical A- and horizontal B-lines in terms of overall survival. For the multivariate analysis, Cox regression model was used. All variables with P<0.1 (log-rank test) from previous analysis (age, pack years, tumor-associated atelectasis and histology) with this end point on univariate analysis were included in a multivariate cox regression analysis. 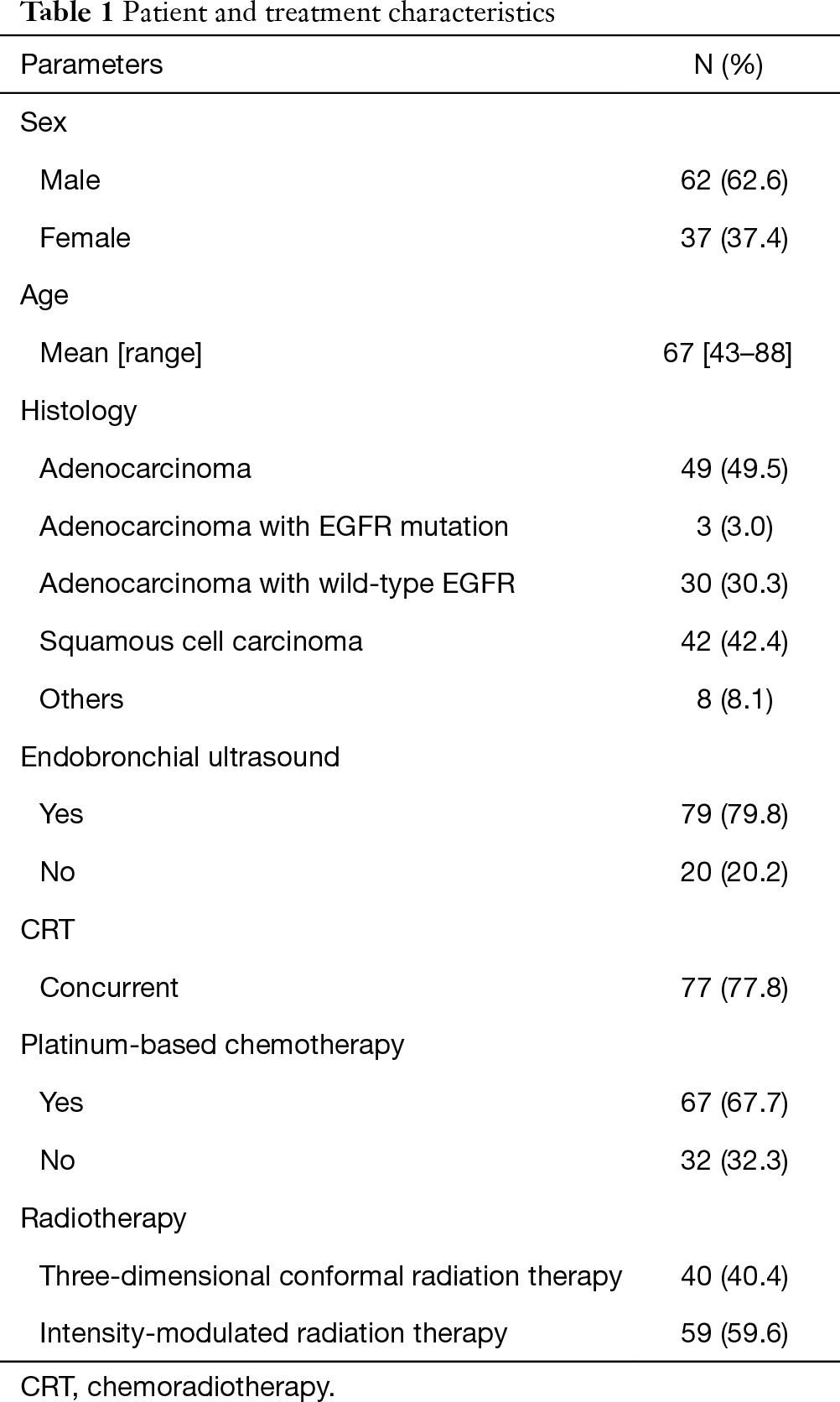 Vertical (A-) and horizontal (B-) lines (involved lymph node distribution)

The score was developed on the basis of PET parameters correlated with OS on univariate analysis and included the SUVmax_PT and horizontal B-line. The patients were divided into 3 subgroups (Table 2). Low risk subgroup (0 points) included patients with SUVmax_PT <8 and horizontal B-line <3.7 (n=28, 28%). Forty-five patients (46%) had 1 point (intermediate risk) and 26 patients (26%) had 2 points (high-risk). 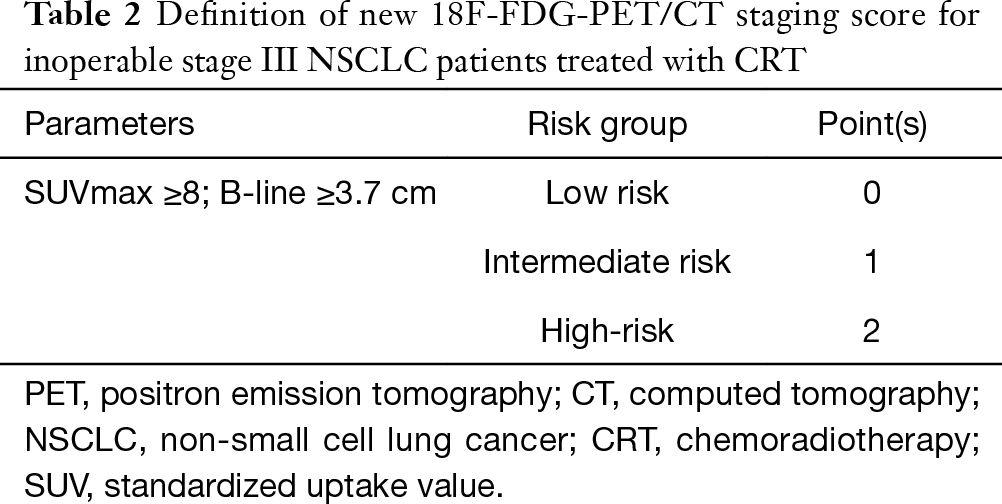 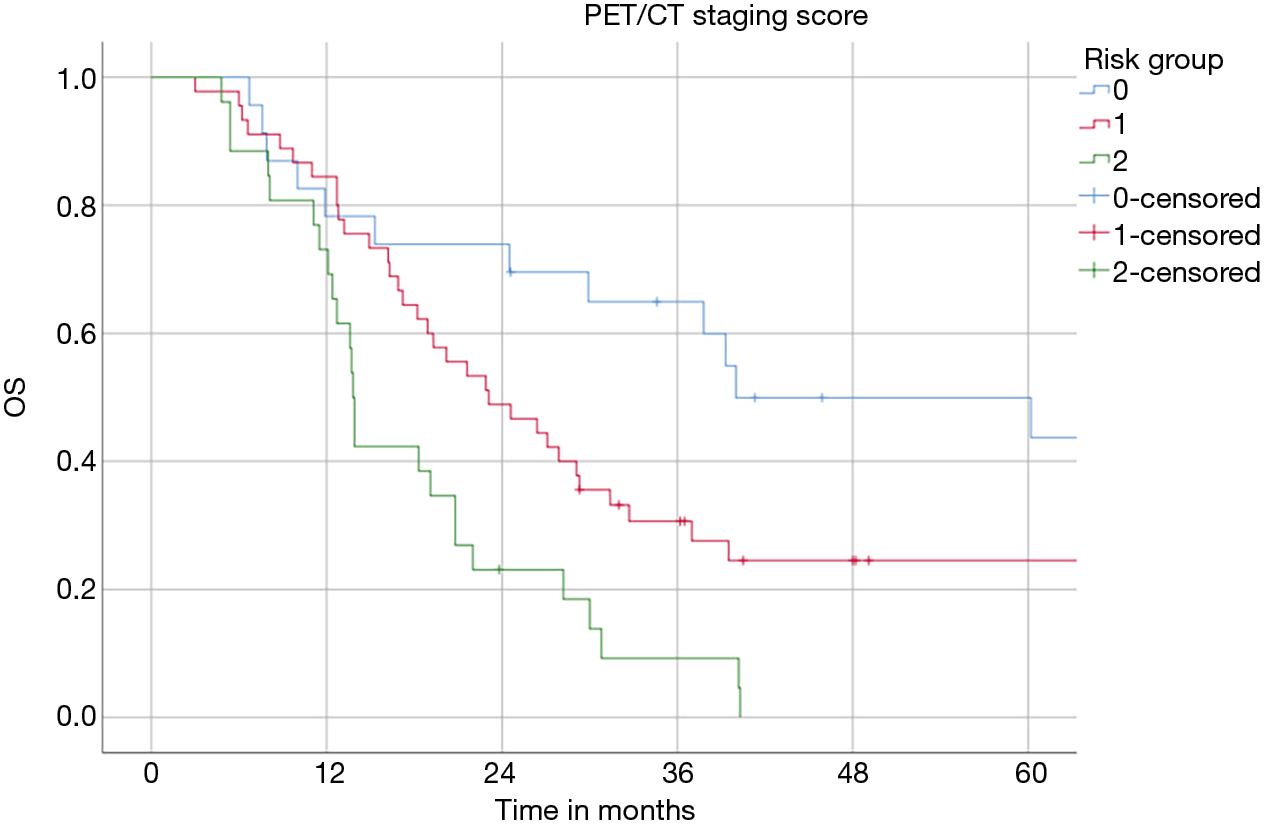 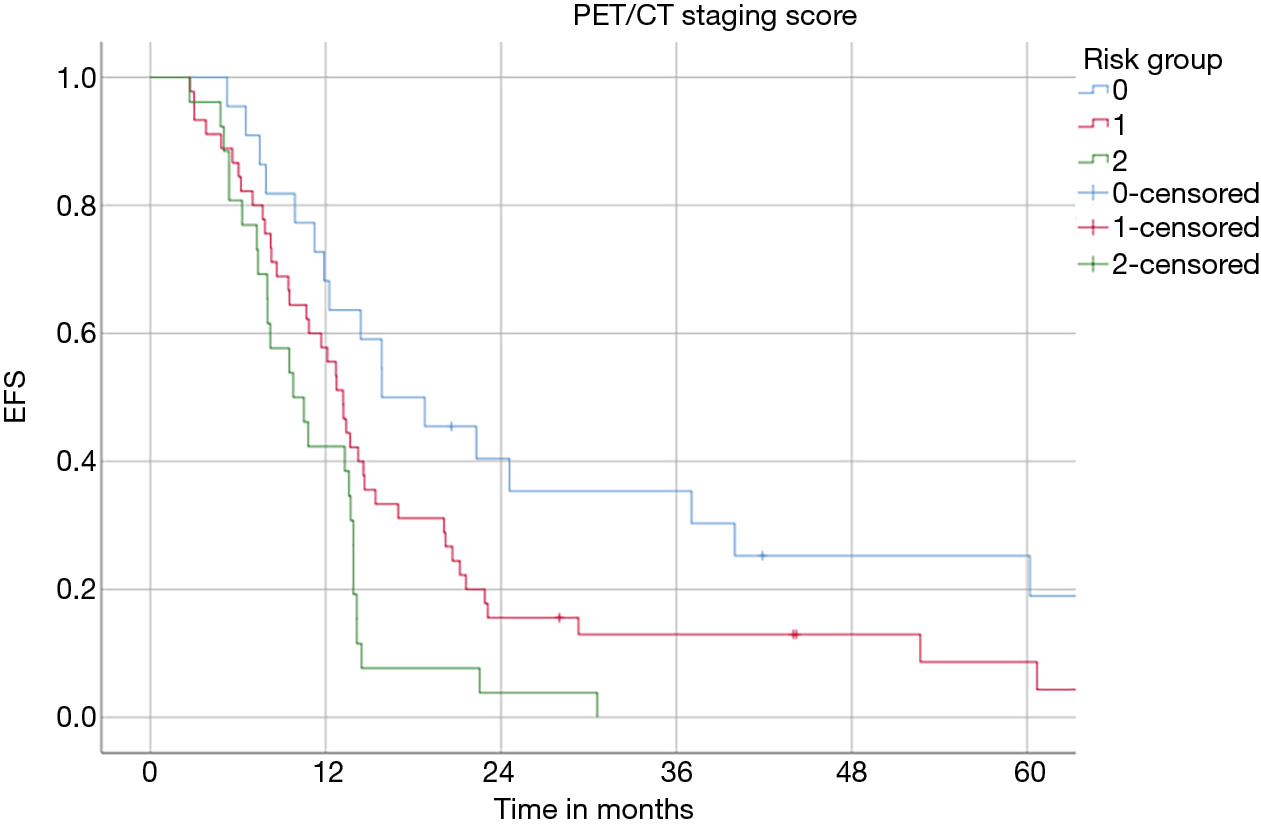 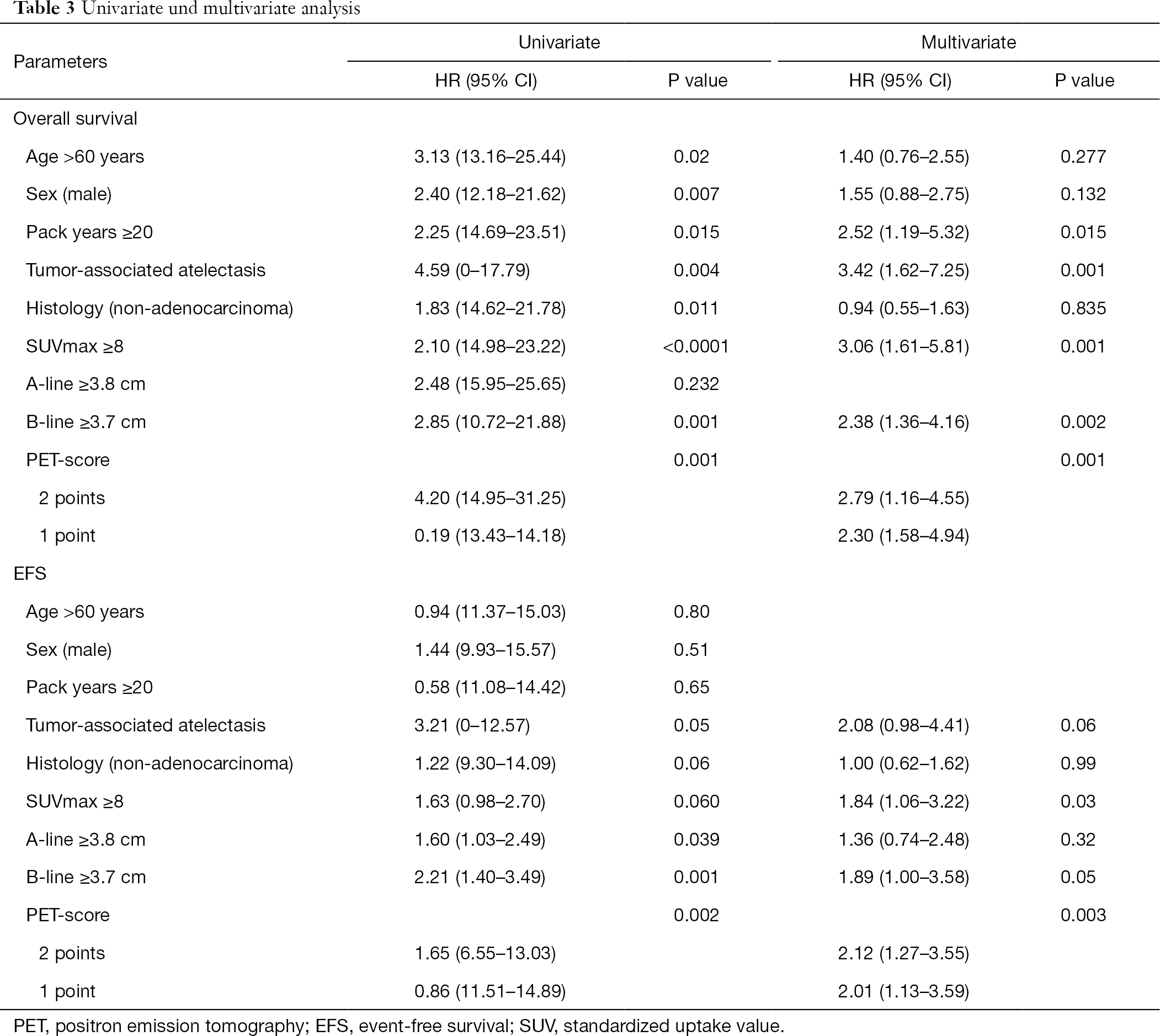 An important role of 18F-FDG-PET/CT for initial staging and response characterization in locally-advanced NSCLC has been extensively described. Based on our data, initial PT-MV was defined as an important survival predictor (17). Patients with higher PT-MV (>63 cm3) before the start of multimodal treatment had significantly worse long-term outcome. Regarding the tumor response assessment after CRT, PT-MV reduction of at least 80% was necessary to significantly improve patient outcome (8). Furthermore, the last publication from the ACRIN 6668/RTOG 0235 trial showed that TLG at 175 and MTV at 35 cm3 were cutoff values for the definition of patient prognosis after completion of multimodal treatment (19). Furthermore, SUVmax_PT was also reported as a predictor of patient outcome in stage III NSCLC treated with CRT. Different SUVmax_PT cut-off values have been investigated (20). Kumasaka et al. showed that SUVmax_PT above the median of 9.7 significantly affects patient overall survival (HR 2.24, 95% CI: 1.29–3.88, P<0.01) (21). Analysis of 139 stage III NSCLC patients revealed an SUVmax_PT of 8.47 as a prognostic factor (22). The mean survival times of patients with SUVmax_PT >8.47 was only 15.9 vs. 32 months for the rest of the treated cohort.

On the basis of previous data and the present results, a PET/CT score was developed for patients with good performance status treated with CRT. This score includes SUVmax_PT as a metabolic parameter characterizing tumor vitality and growth as well as B-line (horizontal distribution) as an important characteristic of the metabolically active involved lymph node compartments. Both factors included in the present score were shown to have a significant impact on patient survival in the uni- and multivariate analyses.

According to the cumulative point number (0 to 2), the score was able to identify three different risk subgroups. Relevant survival differences could be demonstrated between patients with low, intermediate and high-risk, respectively. Especially long-term patient outcome, i.e., estimated 3-year OS rates, was significantly different between subgroups: from 52 in low to only 4% in the high-risk patients. Also, an estimated 2-year EFS rate of 32% in the low-risk versus 0% in high-risk patients. According to the presented score, low risk patients had the most favorable prognosis with a median survival of 40 months. In contrast high-risk patients demonstrated a dismal outcome in spite of good initial performance status and completed CRT. High-risk patients might mostly benefit from the individualization of the current multimodal approach. In this setting, intensification of combined treatment with chemo- and/or immunotherapy induction as well as the role of concurrent and sequential immune checkpoint inhibition require new studies.

Important limitations of the present analysis are its retrospective and single-center design. Therefore, an independent validation in an external cohort is ongoing. In addition, PET emission scans were initiated 60 to 90 minutes after tracer injection. It is well known that SUV values increase over time after injection, so the involved nodes may be influenced depending on the time of scanning. False positive lymph nodes may explain the fact that in the subgroup analysis, the scoring system performed worse in SCC patients.

A PET/CT score for inoperable stage III NSCLC treated with CRT has been developed to estimate patient prognosis. The score includes two parameters: SUVmax_PT and horizontal B-line, characterizing PT vitality and growth as well as metabolically active involved lymph node compartments. This score was shown to be an independent prognostic factor in a single-center cohort and might be considered together with patient and treatment related factors for further optimization of multimodal therapy.

Conflicts of Interest: All authors have completed the ICMJE uniform disclosure form (available at http://dx.doi.org/10.21037/tlcr.2020.04.04). The authors have no conflicts of interest to declare.

Ethical Statement: The authors are accountable for all aspects of the work in ensuring that questions related to the accuracy or integrity of any part of the work are appropriately investigated and resolved. This analysis is in compliance with the principles of the Declaration of Helsinki and its subsequent amendments. The study was approved by the Ethics Committee of the Ludwig Maximilian University of Munich (No. 17-230). Individual consent for this retrospective analysis was waived.