Lung cancer is the commonest cause of cancer death worldwide, being responsible for an estimated 1.59 million deaths in 2012 (1). Non-small cell lung cancer (NSCLC) comprises the majority of lung cancer cases, and around 70% of patients present at an advanced stage, when surgical resection is no longer a treatment option (2).

Traditionally, platinum-based chemotherapies were the mainstay of treatment for advanced-stage NSCLC. The past decade however has seen a major paradigm shift in the treatment approach for advanced NSCLC. In 2004, reports emerged of activating somatic mutations in the epidermal growth factor receptor (EGFR) gene in NSCLC, conferring sensitivity to treatment with EGFR tyrosine kinase inhibitors (TKIs) (3-5). Subsequent phase III trials confirmed improved response rates and progression-free survival in NSCLC patients treated with EGFR TKIs compared to platinum-based chemotherapies, where the tumor harbored an activating EGFR mutation (6,7).

EGFR is a transmembrane receptor tyrosine kinase, which activates downstream pathways involved in cellular proliferation and survival. Activating mutations in the tyrosine kinase domain, the majority of which involve exon 19 deletions or a point mutation (L858R) in exon 21, result in enhanced sensitivity to EGFR TKIs, which occupy the ATP binding site (3). Mutations conferring resistance to EGFR TKIs are also reported, notably exon 20 insertions and the exon 20 T790M point mutation (8-11).

Mutation testing has emerged as a vital element in the diagnostic work-up of advanced NSCLC patients, in order to determine which patients are likely to benefit from treatment with targeted therapies. Direct sequencing has been considered the reference method, but is limited by low analytical sensitivity compared to newer platforms (12), which is a particular problem with the typically low cellularity of many lung cancer biopsies. Our institution utilizes a commercially available multiplex PCR assay with analysis based on matrix-assisted laser desorption ionization-time of flight (MALDI-TOF) mass spectrometry technology (13,14).

Although the primary focus is to detect EGFR mutations, our institution also reports mutations in KRAS and BRAF detected by this multiplex method, on the basis that they may be of clinical relevance in NSCLC. Clinical trials of BRAF inhibitors in NSCLC are currently in progress (11). Although no targeted therapies are available for KRAS mutations in NSCLC (11), the presence of a KRAS mutation effectively excludes an EGFR mutation and negates the need to pursue ALK testing, as such major driver mutations are almost always mutually exclusive (9,10).

In the first instance, NSCLC is typically diagnosed on a small biopsy or cytology specimen, obtained through a minimally invasive procedure such as a CT-guided biopsy or bronchoscopy. As most patients with NSCLC present with advanced-stage disease not suitable for surgical resection, these small biopsy or cytology specimens are often the only samples available for mutation testing. The utility of these different specimens in comparison to resected tumors (the “gold standard”) remains to be fully elucidated.

This study reviews the NSCLC cases submitted to our institution for somatic mutation testing, and compares the mutation profiles of different specimens with the aim of assessing their suitability for mutation testing in a real world setting.

This study was approved by the Human Research Ethics Committee of Royal Prince Alfred Hospital. Mutation testing undertaken on NSCLC cases between March 2012 and May 2013 at Royal Prince Alfred Hospital were retrospectively reviewed. All cases were referred by the treating physician. The supplied clinical and pathological information was recorded.

DNA was extracted from formalin-fixed, paraffin-embedded (FFPE) tissue, including cell blocks, and from a cell suspension in one case. Appropriate tumor blocks were selected by a pathologist and macrodissection was undertaken to increase the proportion of tumor cells where appropriate. The percentage of tumor cells in the tissue selected for mutation testing was estimated by an experienced pathologist (Sandra A. O’Toole or Wendy A. Cooper). DNA extraction was undertaken using NucleoSpin FFPE DNA Kit (Macherey Nagel, Düren, Germany). DNA quantity and quality was assessed using Nanodrop ND-1000 Spectrophotometer (NanoDrop Technologies, Wilmington, Delaware, USA) or Qubit 2.0 Fluorometer (Life Technologies, Carlsbad, California, USA). Following the manufacturer’s instructions, specimens with at least 500 ng of extracted DNA were deemed adequate for mutation testing (see below). Specimens with less than 500 ng of extracted DNA were either not tested further or tested with a qualifying comment about the risk of false negative or positive results, at the discretion of the supervising pathologists (Bing Yu, Sandra A. O’Toole, and Wendy A. Cooper).

A total of 146 specimens were submitted for mutation testing, from 143 patients (three patients had two samples tested each). The clinicopathological characteristics of the patients are summarized in Table 1. 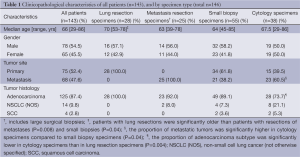 Small biopsy specimens comprised the highest proportion of cases (55 of 146; 37.7%), closely followed by resection specimens (53 of 146; 36.3%) and cytology specimens (38 of 146; 26%). Of the resection specimens, 28 were primary lung resections and 25 were resections (including large surgical biopsies) of a metastasis, including 13 brain, 6 pleura, and 3 lymph node specimens, and 1 specimen each of bone, mediastinum, and submandibular tissue. The small biopsy specimens included 50 core needle biopsies (including 29 lung, 8 lymph node, 7 bone, and 4 liver specimens, and 1 specimen each of abdominal wall and paravertebral soft tissue) and 5 bronchial biopsies. The cytology specimens included 14 percutaneous fine needle aspirations (FNAs) (11 lungs and 1 specimen each of adrenal gland, kidney, and lymph node), 8 endobronchial ultrasound-guided FNAs, 12 pleural and 1 pericardial fluid, and 3 bronchial washings.

Of 146 specimens, 4 specimens (2.7%; 2 small biopsy and 2 cytology specimens) contained insufficient DNA for mutation testing and these specimens were excluded from subsequent analyses of mutations. There was no significant difference in the proportion of cases deemed insufficient between the specimen types.

Three patients had two specimens tested each. In one case, an initial cytology specimen (FNA of the lung tumor), and a subsequent lung resection specimen were tested; both confirmed an EGFR L858R mutation. In another case, two small biopsy specimens were tested due to concerns about low DNA quantity in the first specimen; both specimens were negative. Finally in the third case, two resected synchronous primary tumors were tested; both contained a KRAS mutation (G12C in one tumor and G12D in the other).

There was no significant difference in the mean percentage of tumor cells among all specimens harboring EGFR mutations compared to those found to be EGFR wild type (53.3%±4.6% vs. 44.2%±2.5%; P=0.1). For cytology specimens alone (but not lung resections, metastatic resections, or small biopsy specimens alone), the mean percentage of tumor cells was significantly higher in cases harboring an EGFR mutation compared to those where no EGFR mutation was found (67.1%±12.6% vs. 35.5%±6.2%, P=0.03).

Interestingly, lung resection specimens demonstrated a higher EGFR mutation rate of 35.7%. Presumably, a proportion of these cases represent patients with early-stage disease where the oncologist has requested preemptive EGFR mutation testing. Hence there may be a selection bias in this instance towards a clinical suspicion of EGFR mutation, namely younger, female, Asian, non-smokers, with adenocarcinoma histology (8-11). All lung resection specimens were adenocarcinomas, however no trend towards younger or female patients was observed. Unfortunately, further clinical details including ethnicity and smoking status were not available in this study, and given our small study size, a detailed clinicopathological analysis could not be undertaken. However, as lung resection specimens represent the “gold standard” for the quantity of tumor tissue available for mutation testing; this group was selected as the comparator for small biopsy and cytology specimens.

Paired resection and small biopsy or cytology specimens were not available except in one patient, where the result was concordant between cytology and resection specimens. Hence, we have used mutation rate as a surrogate for the adequacy of the specimen for mutation testing. Specifically, the EGFR mutation rate was of primary concern, given its clinical relevance and indication as the main purpose for DNA mutation testing.

In contrast to EGFR mutations, KRAS mutations are more often seen in Caucasians, males, and smokers (10,11). The KRAS mutation rate was significantly lower in cytology specimens compared to other specimen types. This may be related to selection bias, which may also contribute to the slightly higher EGFR mutation rate in cytology specimens compared to small biopsy specimens, though this was not statistically significant. Our study was also limited by its small size.

Our study supports the growing evidence for the utility of cytology specimens for mutation testing, and suggests that they are not inferior to small biopsy specimens. In our study, EGFR mutations can be detected at a frequency consistent with published rates in both cytology and small biopsy specimens. With the growing expectation that cytology and small biopsy specimens offer both a diagnosis and a source of tissue for mutation testing, specimen selection and triage is increasingly vital. Each laboratory should be aware of the limitations of their testing method, and consider each case on an individual basis with particular reference to DNA quality and quantity. Communication between the laboratory, pathologists, and physicians is vital both to determine the availability of specimens and the limitations of the assay when only a small specimen is available.