Alternative splicing of HER2: a novel mediator of EGFR TKI resistance

Over the past three decades, lung cancer has been the leading cause of cancer deaths for both men and women (1). Lung cancer mortality remains high as it is usually diagnosed at a late stage and therapies in the metastatic setting have limited efficacy (1). However, there have been marked advances in the treatment of non-small cell lung cancer (NSCLC), the largest subset of lung cancer, since the introduction of immunotherapy and targeted therapy. When patients with advanced NSCLC are initially diagnosed, they are subtyped based on molecular drivers. While subsets of NSCLC patients with a molecular driver, such as those with KRAS mutations, do not as of yet have an approved targeted therapy, approximately 25% of NSCLC patients have a commercially available targeted agent (2,3). The largest group with a targetable molecular driver is the approximately 15% of patients with sensitizing EGFR mutations (2,3).

Despite improved clinical outcomes, response to first-line osimertinib remains limited by acquired resistance (9). The mechanisms of resistance to first-line osimertinib are not well-established. Early studies have demonstrated that resistance mechanisms appear to be less EGFR-dependent, as tertiary EGFR mutations and amplification of wild-type (WT) EGFR only account for resistance in 5–10% of patients (10-12). The predominant EGFR-independent mechanism is MET amplification, accounting for resistance in approximately 15% of patients (10-12). Unfortunately, the mechanism of resistance in approximately 50% of patients remains unknown (10-12). Additionally, there are no targeted therapies approved for patients following progression on first-line osimertinib. Immunotherapy in combination with platinum-based chemotherapy may be a viable therapeutic option in this setting as the recent IMpower 150 trial demonstrated that chemo-immunotherapy plus bevacizumab improved PFS and OS when compared to chemotherapy alone in EGFR-mutant and ALK-positive patients who had progressed on a targeted therapy (13). The IMpower 130 trial failed to demonstrate a clinical benefit for the addition of immunotherapy to chemotherapy without bevacizumab in EGFR-mutant NSCLCs (14). It is important to note that in the large registrational trials evaluating pembrolizumab alone or in combination with chemotherapy in patients with non-squamous NSCLC did not enroll patients with EGFR mutations or ALK translocations (15-17). An ongoing phase III trial, KEYNOTE 789, is specifically aimed at addressing if chemo-immunotherapy is a viable strategy in patients with EGFR-mutant NSCLC resistant to EGFR TKIs.

In a recent report, Hsu and colleagues demonstrated that the exon 16-skipping splice variant of HER2 (HER2D16) is a mediator of osimertinib resistance. Initially, the authors examine the expression of HER2D16 in a patient with metastatic EGFR-mutant NSCLC (20). The patient in the study had known lung lesions, liver metastases, and a malignant pleural effusion following progression on two separate EGFR TKIs (gefitinib and erlotinib) and two different lines of chemotherapy (20). Analysis of the malignant pleural effusion revealed L858R and T790M EGFR mutations. Osimertinib was subsequently initiated and follow-up revealed that the lung lesion responded to therapy but the liver metastasis progressed. Analysis of cell-free DNA on progression revealed increase in the allelic fraction of HER2D16, HER2 amplification, and loss of T790M EGFR expression (20).

After observing HER2D16 expression in a patient following the development of osimertinib resistance, the authors then examined the role of HER2D16 in mediating osimertinib resistance in vitro. Given previous studies demonstrated that HER2D16 primarily functions as a homodimer in breast cancer (21-23), Hsu et al. investigated whether HER2D16 functions as a homo- or heterodimer in NSCLC cells (20). Interestingly, both in cells with low HER family expression and in cells expressing L858R/T790M mutant EGFR, HER2D16 has the ability to homodimerize and form heterodimers with EGFR (Figure 1) (20). HER2 and HER2D16 overexpression in cells lacking HER family expression was sufficient to cause ERK activation, however, it was not sufficient to cause increased ERK or AKT signaling in cells expressing L858R/T790M mutant EGFR (20). The inability of HER2 to increase ERK and AKT activation in EGFR-mutant NSCLC cells likely reflects maximal activation of these pathways through constitutively active EGFR. 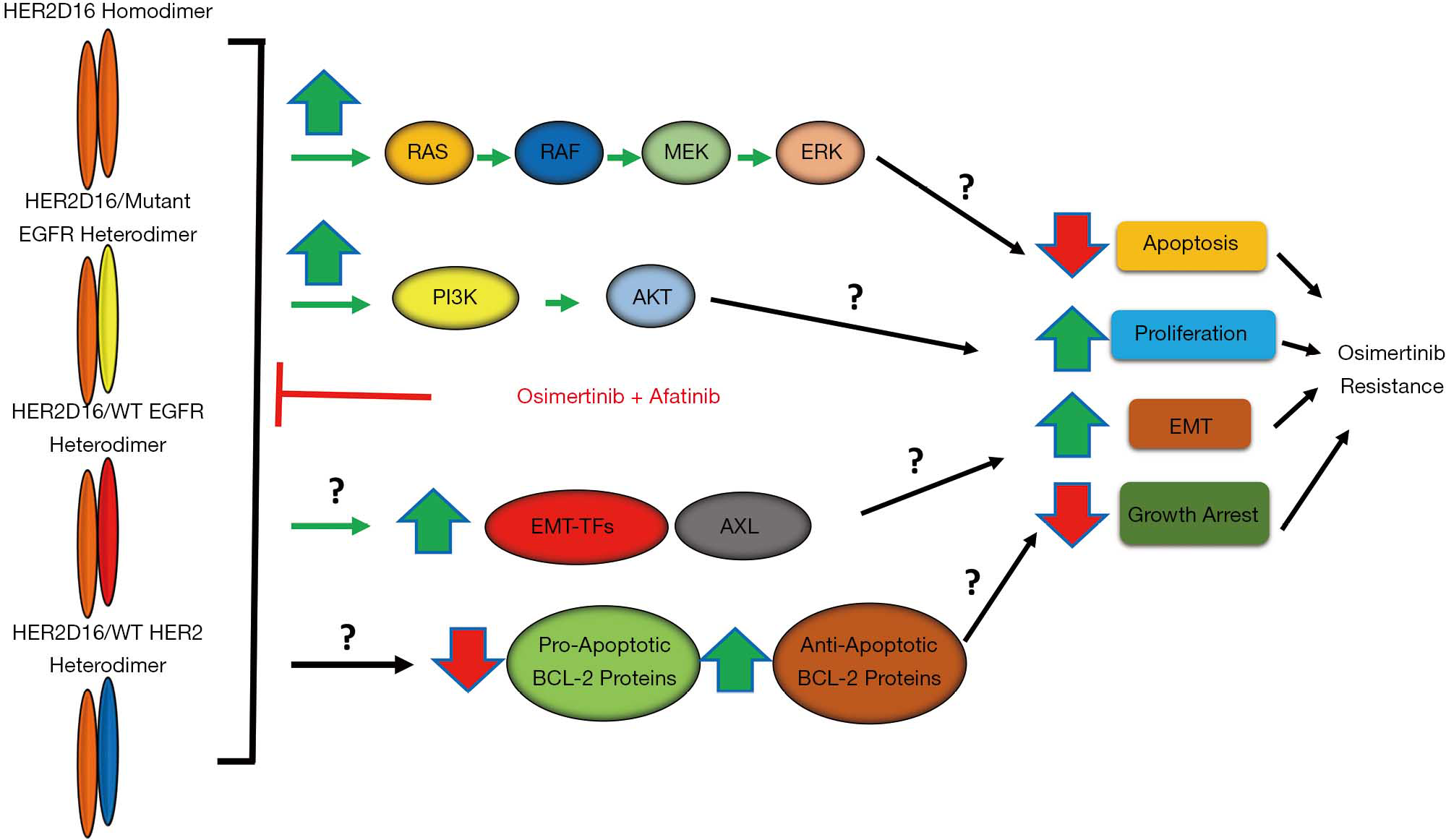 Figure 1 Overexpression of HER2D16, a HER2 exon-16 splice variant, is a novel mediator of osimertinib resistance in EGFR-mutant non-small cell lung cancer (NSCLC) and is associated with reactivation of EGFR pathway signaling. In the discussed report, the authors demonstrate that HER2D16 can homodimerize and/or heterodimerize with mutant EGFR and WT EGFR. Additionally, as HER2D16 expression frequently occurs with HER2 amplification, it may form heterodimers with WT HER2. HER2D16 overexpression was sufficient to cause osimertinib resistance in EGFR-mutant NSCLC cell with a T790M mutation and was associated with reactivation of EGFR and downstream mitogenic/proliferative pathways such as the MAPK and PI3K/AKT pathways. The combination of afatinib, a pan-HER TKI, and osimertinib overcame HER2D16-mediated resistance. Future studies are needed to determine if HER2D16 drives resistance solely through reactivation of MAPK and/or AKT or if other known functions of HER2D16 such as suppression of apoptosis and induction of epithelial-mesenchymal transition also play a role. EMT, epithelial-mesenchymal transition, EMT-TF, epithelial-mesenchymal transition-transcription factors.

Previous studies have demonstrated that HER2D16 promotes breast cancer tumorigenesis through activation of SRC (23,24). However, HER2D16 overexpression did not increase total SRC or phospho-SRC expression in H1975 cells (20). Additionally, genetic or pharmacologic inhibition (with dasatinib) of SRC was unable to overcome resistance associated with HER2 or HER2D16 overexpression (20). Interestingly, the use of an irreversible pan-HER inhibitor, afatinib, was able to overcome resistance mediated both by HER2 and HER2D16 overexpression (20). In H1975 cells overexpressing HER2 or HER2D16, the combination of osimertinib and afatinib had synergistic activity that was accompanied by suppression of EGFR and downstream ERK/AKT pathway activation (Figure 1) (20). These results suggest that combining osimertinib with a pan-HER inhibitor may be a strategy to overcome HER2-mediated osimertinib resistance.

The recent report by Hsu et al. is the first study to implicate the Exon-16 skipping HER2 splice variant as a mediator of osimertinib resistance. A strength of this study is that the authors demonstrate HER2D16 expression in an EGFR-mutant NSCLC patient after developing osimertinib resistance. This clinical evidence is accompanied by clear in vitro evidence that HER2D16 overexpression in EGFR-mutant NSCLC cells is sufficient to cause osimertinib resistance (20). The authors also elucidate novel functions of the HER2D16 splice variant in NSCLC cells by demonstrating HER2D16 functions both as a homo- and heterodimer with EGFR and functions to promote therapeutic resistance independently of SRC signaling (20). This differs from the function of HER2D16 in breast cancer. Previous studies demonstrate that in breast cancer HER2D16 promotes tumorigenesis primarily as a homodimer and the ability of HER2D16 to mediate therapeutic resistance requires SRC activity (20-24). Studies investigating the factors that influence HER2D12 dimerization and the structure of the HER2 exon-16 skipping splice variant are lacking. Future studies are needed to delineate the structural changes in HER2 caused by exon-16 skipping, structural changes in HER2D16 induced by hetero- versus homodimer formation, and the similarity in kinase domain structure between HER2D16, WT HER2, and WT EGFR. These structural studies are important as they may have therapeutic significance as mutant or aberrant receptor tyrosine kinases (RTKs) can share significant structural overlap with wild-type RTKs. For example, the kinase domain of Exon-20 insertion mutant EGFR shares significant structural similarity to WT EGFR (25). Afatinib, which irreversibly inhibits wild-type EGFR as well as HER2 and HER4, has limited efficacy in the EGFR exon-20 insertion mutant NSCLC population as the structural similarity between the exon-20 insertion mutant EGFR and WT EGFR significantly narrows the therapeutic index of afatinib (25). The dose in vivo required to effectively inhibit the exon-20 insertion mutant EGFR is limited by the side-effects of inhibiting EGFR WT (25).

While the authors provide a possible therapeutic strategy of combining afatinib with osimertinib, to overcome HER2D16-mediated therapeutic resistance, afatinib may have additional side-effects in combination with osimertinib associated with inhibition of WT EGFR. Consequently, paralleling structural studies of HER2D16, in vivo studies are needed to ensure that afatinib in combination with osimertinib is not only efficacious in the setting of HER2D16-driven osimertinib resistance but also can adequately inhibit HER2D16 without significant toxicity or side-effects associated with WT EGFR inhibition. This combination was utilized in a EGFR-mutant NSCLC patient who developed a T790M EGFR mutation, HER2 amplification, and a HER2 Exon 20 mutation following progression on icotinib, a first-generation EGFR TKI (26). The combination of osimertinib and afatinib was well-tolerated (grade 2 diarrhea and grade 1 rash) and led to a partial response after 4 weeks of treatment (26). Conversely, a recent study demonstrated that the combination of osimertinib and erlotinib in a transgenic model of EGFR-mutant lung cancer was associated with kidney fibrosis and atrophy (27). Future studies should also evaluate osimertinib in combination with other HER2-specific inhibitors with well-established toxicity profiles like trastuzumab. While the evidence is conflicting, HER2D16 may be a marker of HER2 dependence and a predictor of response to trastuzumab (18,22,23). Interestingly, a recent case report identified an activating HER2 mutation, HER2 amplification and a T790M EGFR mutation in a patient with EGFR-mutant NSCLC following progression on gefitinib. The patient received osimertinib and trastuzumab, which resulted in a clinical and molecular response, without overt toxicity (28).

While the authors demonstrate that HER2D16 overexpression was associated with persistent EGFR, AKT, and ERK activation, it is unclear if this is the mechanism(s) by which HER2D16 promotes resistance. Furthermore, it is unclear if HER2D16 homodimerization and/or heterodimerization with WT HER2, mutant EGFR, and/or WT EGFR is required for osimertinib resistance (Figure 1). Future studies should be aimed at determining whether HER2D16 promotes osimertinib resistance solely through activation of EGFR and/or downstream mitogenic/proliferative signaling pathways or whether HER2D16 promotes resistance through alternative mechanisms (Figure 1). Previous work in breast cancer has revealed that HER2D16 expression promotes epithelial-mesenchymal transition (EMT) and stemness potentially through increased expression of AXL and EMT-transcription factors, such as SNAIL1 and TWIST1 (Figure 1) (21,23,29). Interestingly, EMT is associated with resistance to EGFR TKIs, and overexpression of EMT-transcription factors is both sufficient and required for resistance to first- and third-generation EGFR TKIs in EGFR-mutant NSCLC (30,31). Numerous studies have also demonstrated that suppression of apoptosis, specifically through downregulation of the pro-apoptotic protein BIM, mediates resistance to EGFR TKIs (32). Future studies should evaluate whether HER2D16 suppresses osimertinib-induced apoptosis given previous studies have demonstrated that HER2D16 can lead to tamoxifen resistance in breast cancer cells through upregulation of anti-apoptotic BCL-2 proteins (Figure 1) (33). Determining the mechanism(s) why HER2D16 promotes resistance is important as it may render additional therapeutic targets. For example, tumors that undergo EMT as a mechanism of resistance to EGFR TKIs are more sensitive to BCL-2/BCL-xL inhibitors (30,31).

Conflicts of Interest: Both authors have completed the ICMJE uniform disclosure from (available at http://dx.doi.org/10.21037/tlcr-20-618). LCV receives commercial research grants from Genentech, AstraZenca, Exelixis, Incyte, Merck, Rain, and GlaxoSmithKline and is a paid consultant for Achilles. ZAY has no conflicts of interest to disclose.