Circulating tumor cell (CTC) have prognostic value in non-small lung cancer (NSCLC) (1-5). However, in NSCLC CTC are detected in only 30% of metastatic NSCLC patients and in low frequencies of 1–2 CTC per 7.5 mL of blood (1-8). CTC are likely present in the majority of metastatic patients but the current available methods are only capable of screening limited volumes of blood (9,10). As CTC have a similar density as mononuclear cells they can be extracted from the blood by means of a diagnostic leukapheresis (DLA), allowing the screening of a large volume of blood for CTC (10-13).

In the DLA product the CellSearch platform identifies CTC in higher frequencies and in more patients compared to peripheral blood (11-13). CellSearch uses positive immunomagnetic selection to extract the epithelial cell adhesion molecule (EpCAM) positive CTC. Due to the high numbers of leukocytes in the DLA product, which have non-specific interaction with the immunomagnetic particles targeting EpCAM, usage of the CellSearch platform in processing DLA is limited (11). VyCAP microsieves collect CTC by their relative size and rigidity, allowing for the detection of both EpCAM positive and negative cells (1-3). In addition, modified versions of these filters may allow isolation of single CTC for genomic analysis, or to perform functional tests in captured CTC (14-18). In this study we looked into the capability of VyCAP microsieves to filter the DLA product of NSCLC patients to enumerate CTC and compare the CTC counts per patient with those of CellSearch.

Consecutive patients with proven NSCLC starting their treatment were prospectively included in an exploratory cohort. Patients who had an Eastern Cooperative Oncology Group Performance Status (PS) of 0–2 and did not use anticoagulation medication or suffer from clotting disorders were selected. All patients gave informed consent. The study was approved by the regional Medical Ethical Committee (NL55754.042.15) and registered in the Dutch trial register (NL5423), conducted in accordance with the Declaration of Helsinki (as revised in 2013).

DLAs were performed with the Spectra Optia® Apheresis System using an intermediate density layer set (IDL) and software version 11 (Terumo BCT inc, Lakewood, CO, USA). The standard continuous MNC protocol was used with a packing factor of 4.5, collection pump set to 1 mL per minute, hematocrit minus 3 percent points and a flexible inlet flow. Anticoagulant Citrate Dextrose Solution A (ACDA) was used for anticoagulation in a dilution of 1:11, further adjusted when aggregate formation was observed in the collection chamber.

We aimed to process the total blood volume (TBV) of the patient, as estimated with the formula of Nadler (19). DLA collection would be performed at a hematocrit around 5%.

DLA procedure efficacy was measured by determining the percentage of lymphocytes that were captured compared to the number that passed through the machine (lymphocytes in DLA product divided by lymphocytes in blood that was processed).

A DLA aliquot with a volume equaling that of 2×108 leukocytes was diluted with CellSearch Circulating Tumor Cell Kit Dilution Buffer (Menarini Silicon Biosystems, Huntingdon Valley, PA, USA) to 9 mL and transferred to a CTC-TVT Transfix tube (Cytomark, Buckingham, United Kingdom) and stored at room temperature for at least 24 h. The sample was filtered within 72 h after completion of the DLA procedure using two VyCAP microsieves. This filtration in two steps was because of the experiences in the CTC-Trap study, where CTC were lost and only a small volume of DLA could be filtered (13). Filtration and CTC detection occurred according to manufacturer instructions [version 2.1, September 2017 (20)]. Firstly, the whole DLA sample is filtered using a microsieve with pores of 7 µm using a pressure of 30–250 mbar. Subsequently, the 7 µm microsieve filtrate, collected in the waste compartment of the VyCAP disposable, was passed through a microsieve with 5 µm pores at a pressure of 150–250 mbar. Immediately after filtration, the cells on the filter are stained with immunofluorescent labels using a permeabilization buffer, followed by the addition of a staining cocktail containing pan-cytokeratin CK-11 (PE, Cell Signaling Technology, #5075S, clone C11), pan-cytokeratin AE1/AE3 (eFluor 570, eBioscience, 41-9003-82, clone AE1/AE3), CD45 (APC, eBioscience, 17-0459-41/42, clone HI30) and CD16 (APC, BioLegend, #302011, clone 3G8). Mounting medium containing DAPI was added followed by the addition of a cover slip. The microsieves were scanned and images of the cells on the microsieves were acquired. CTC, defined as cells expressing cytokeratins and containing a nucleus, but lacking CD45 and CD16 were counted. CTC counts are reported per mL DLA product.

Two samples which clogged were additionally labeled with CD41 (FITC, BD Pharmingham, cat#557296) to detect platelets. In two patients a second DLA sample, in which ACDA was used to dilute the sample to 9 mL instead of CellSearch dilution buffer, was used to determine the influence of anticoagulants on the formation cell clusters and cell clumps in the DLA product.

We detected CTC in DLA product with CellSearch as previously described (13). In short, a DLA product volume containing in total 2×108 leukocytes was diluted to 7.5 mL with CellSearch dilution buffer in a CellSave CTC tube (Menarini siliconbiosystems, Bologna, Italy). CellSearch would then be used to identify CTC according to manufacturer’s instructions.

To determine the recovery of tumor cells in DLA product, DLA products of two patients were spiked with 384 and 135 MCF-7 cells that were manually counted before transferring these to the DLA sample. MCF-7 cells were exposed to the sample concentration of transfix for the same times as the DLA samples. 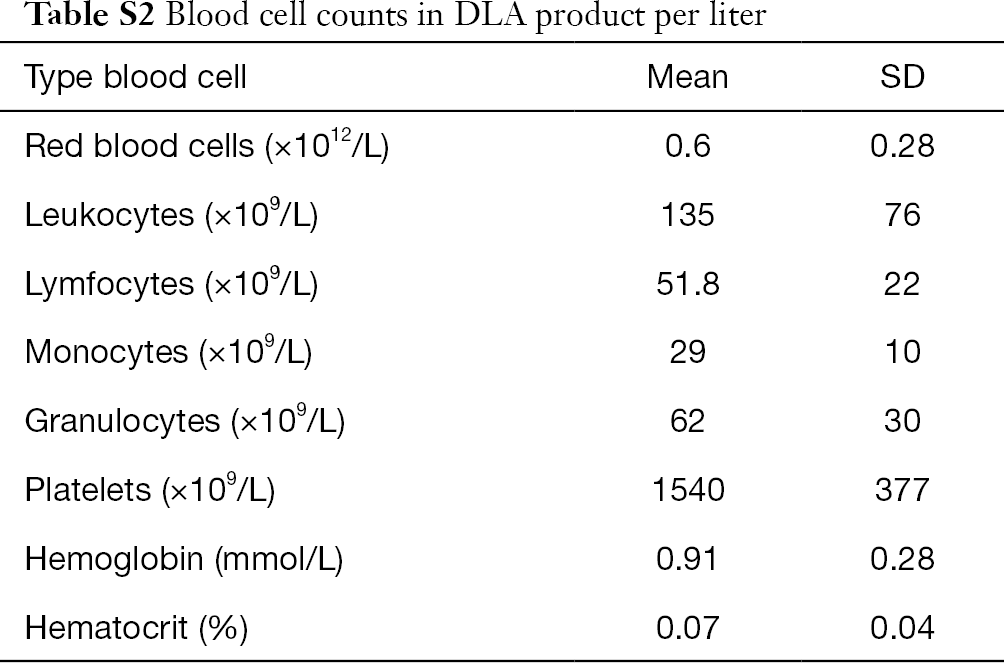 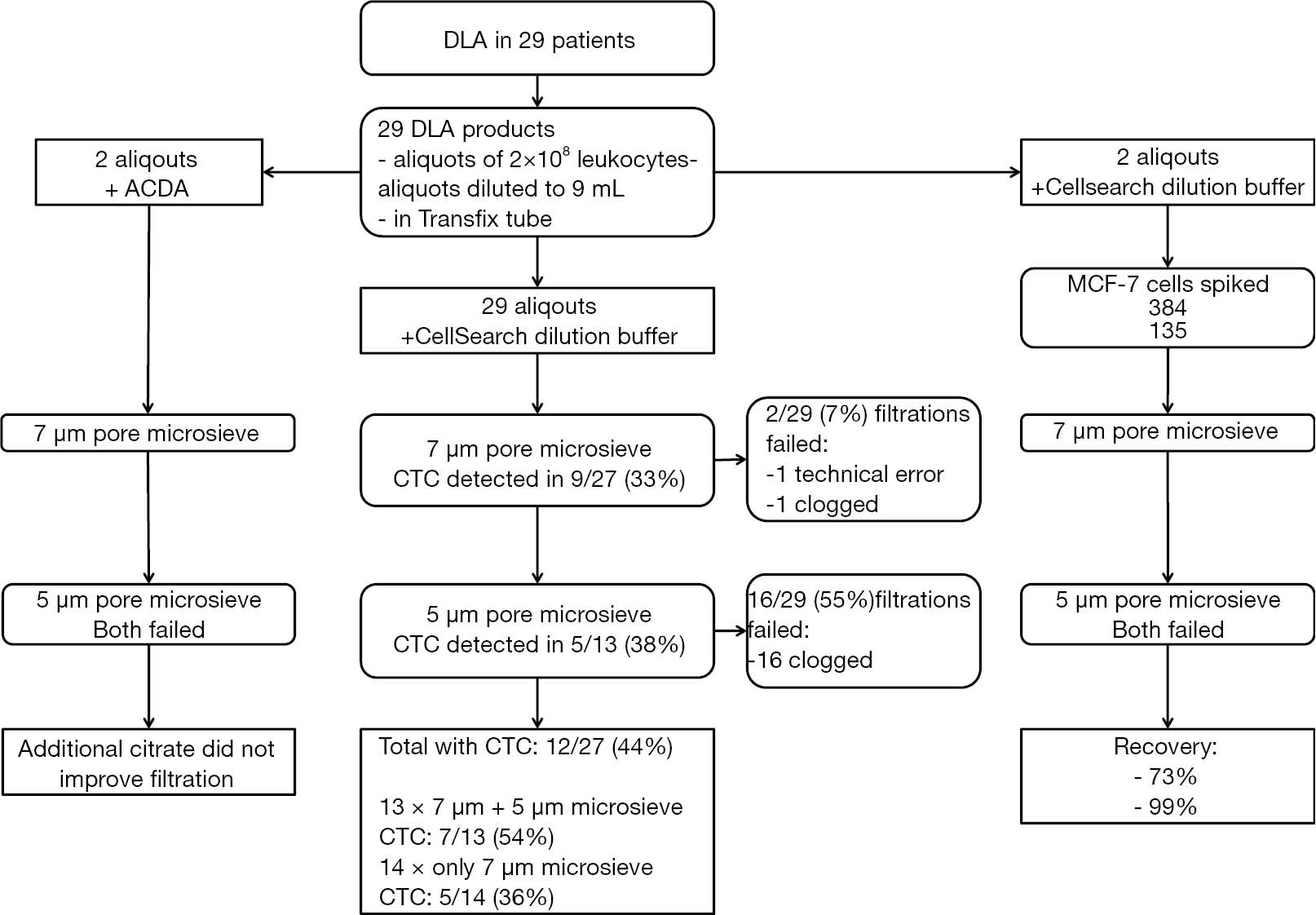 Out of 29 DLA products (Table 1) that were filtered with the 7 µm pore microsieves, 93% [27] succeeded. One sample failed to filtrate due to a technical issue and one due to clogging (processed at 72 hours after DLA). Failure of the sample to filtrate could not be associated with time between the DLA procedure and filtration (exposure time to fixative) or to cell counts in the DLA product (white blood cells, monocytes, lymphocytes, granulocytes, platelets, hematocrit). CTC were detected in 33% (9/27) successfully filtered samples. CTC counts ranged from 0–3 CTC per mL DLA product (median =0, IQR: 0–0.7). 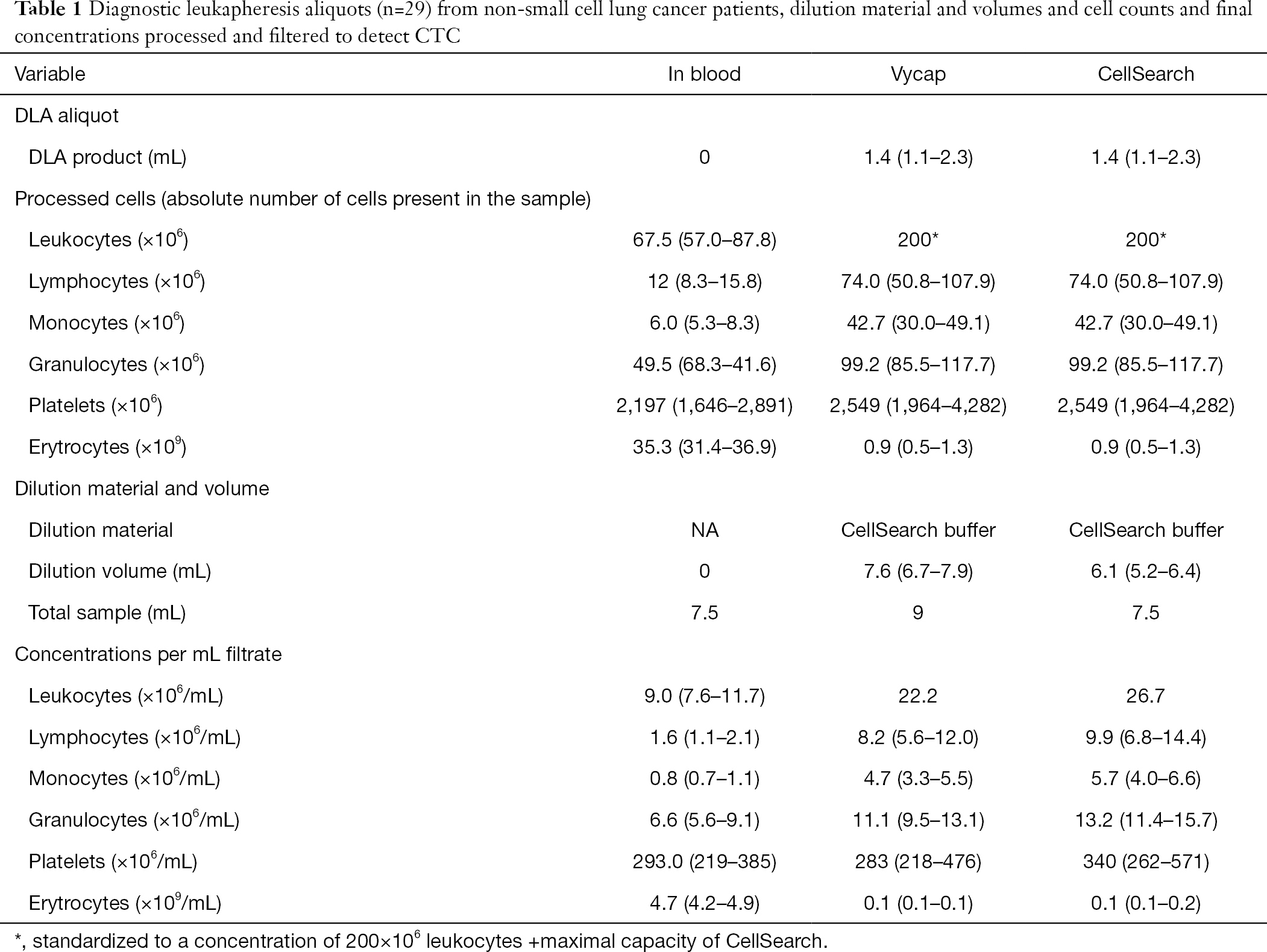 Only 45% (13/29) of filtrations through the 5 µm pore microsieves were successful, the others failed due to clogging of the filter. Neither cell counts in the DLA product nor DLA volume correlated to filtration failure. Only the time that DLA product was exposed to the fixative in the Transfix tube correlated positively with filtration failure (ρ=0.51, P<0.01). Out of 29 samples filtered with 5 µm pore microsieves, 19 were processed 24 hours after DLA. Seven of these nineteen failed (36%). Seven samples were processed 48 hours after DLA, of which 6 failed (86%). Two samples were processed at 72 hours and both clogged. CTC were detected in 38% (5/13) of successfully filtered samples. CTC count ranged from 0–1.8 CTC per mL DLA product (median =0, IQR: 0–0.9).

On several filters cellular aggregates were observed (Figure 2A). To study the presence of platelets immunofluorescent staining with CD41 was performed. Accumulation was observed in the pores of the filters (Figure 2B), indicating aggregation of platelets. 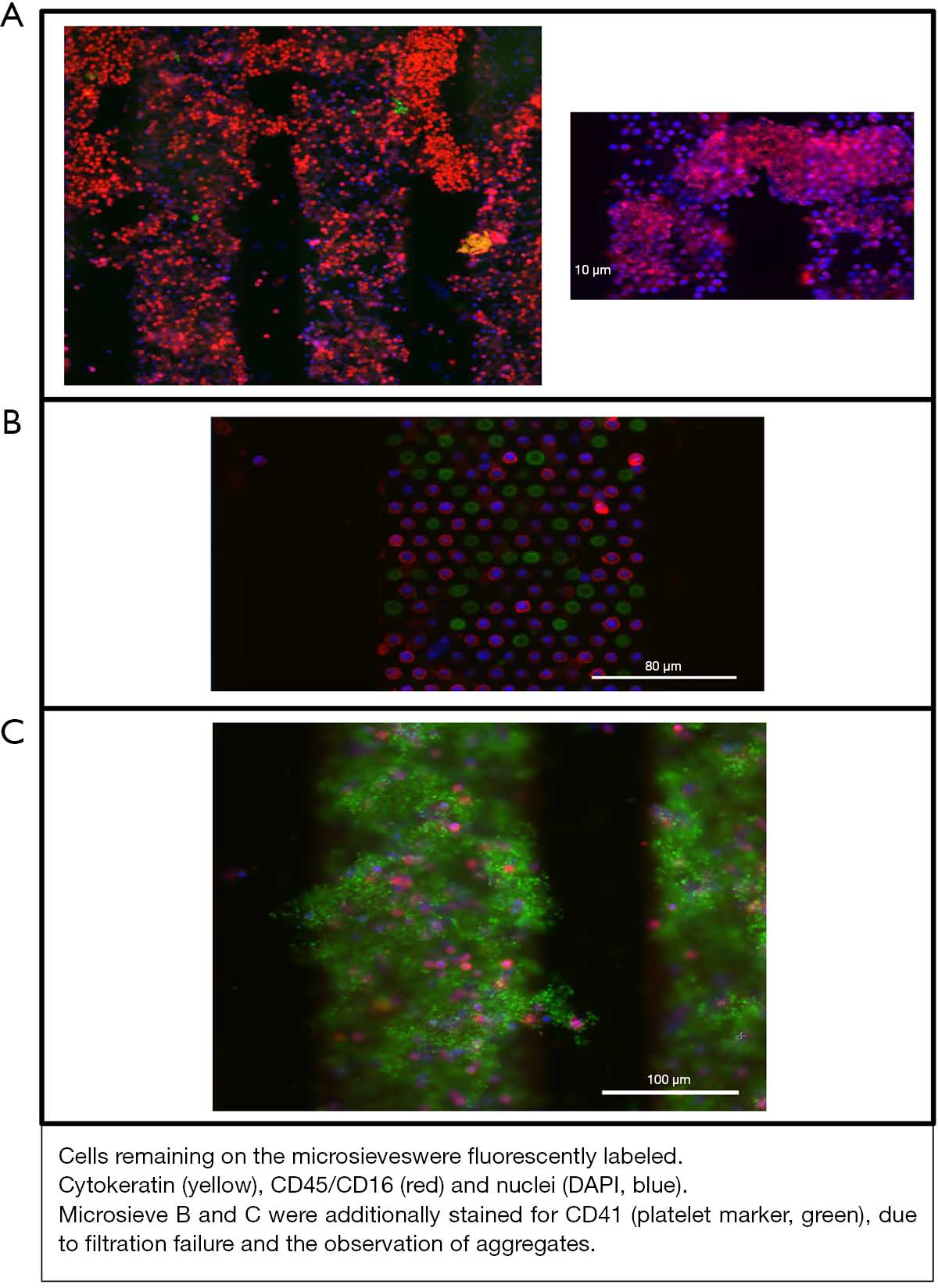 Figure 2 Clogged VyCAP microfilters: aggregates of cells (A), accumulation of CD41 (platelet marker) staining in pores of a sample processed without additional ACDA (B) and with additional ACDA (C).

For two patients 2 DLA product samples of 2×108 leukocytes were investigated. Each patient had one sample diluted with CellSearch dilution buffer and one sample with ACDA for additional anticoagulation. The samples were processed at 24 hours after the DLA procedure. Both samples, with and without extra ACDA, could only be filtered using the 7 µm pore microsieves. The 5 µm pore filters clogged. The number of detected CTC did not differ. The additional ACDA did not prevent the formation of clumps and clusters (Figure 2C).

For both spiked samples, only the filtration with the 7 µm microsieves was successful at 24 hours after DLA. Recovery percentage of MCF-7 cells was 73% and 99%. 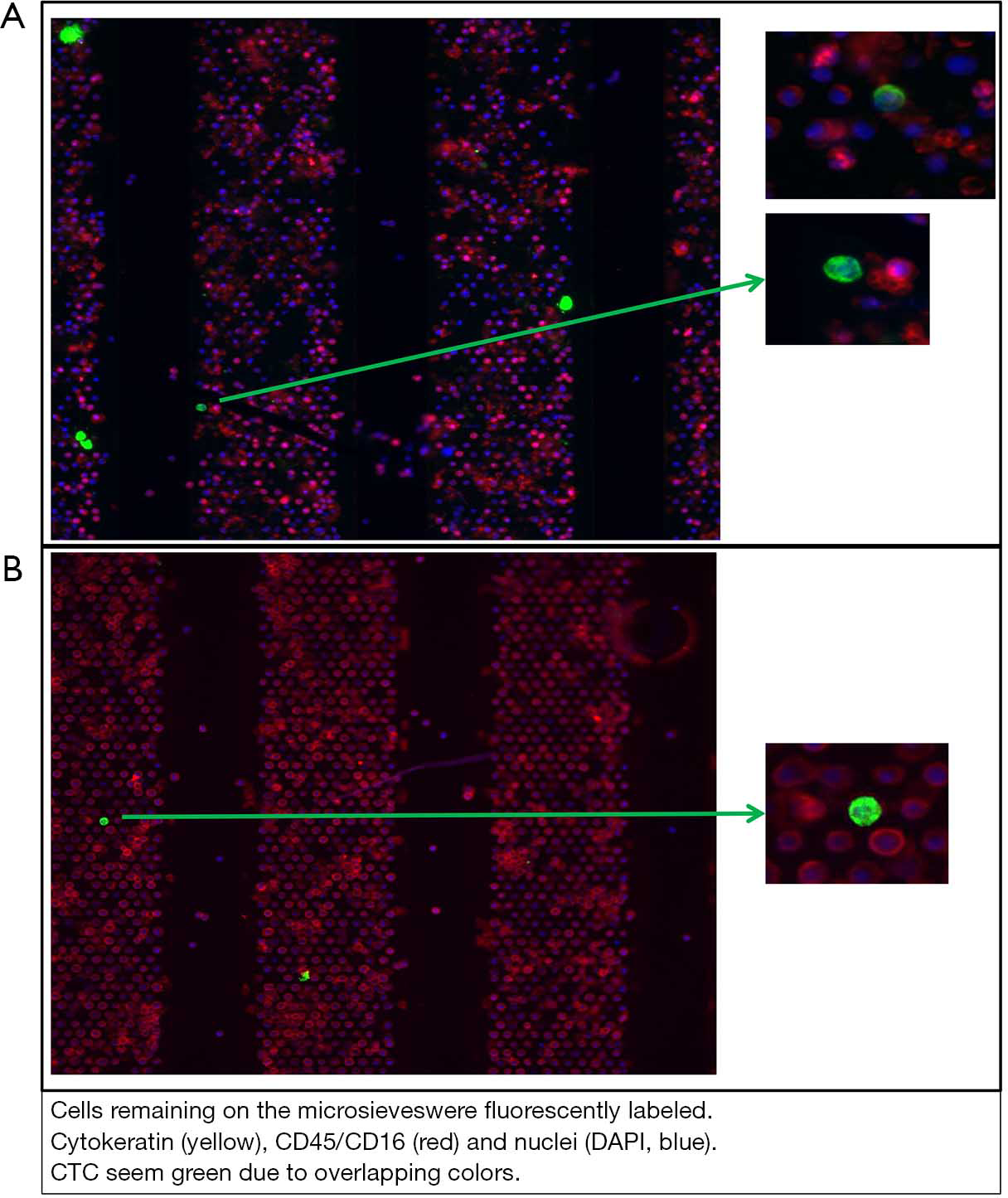 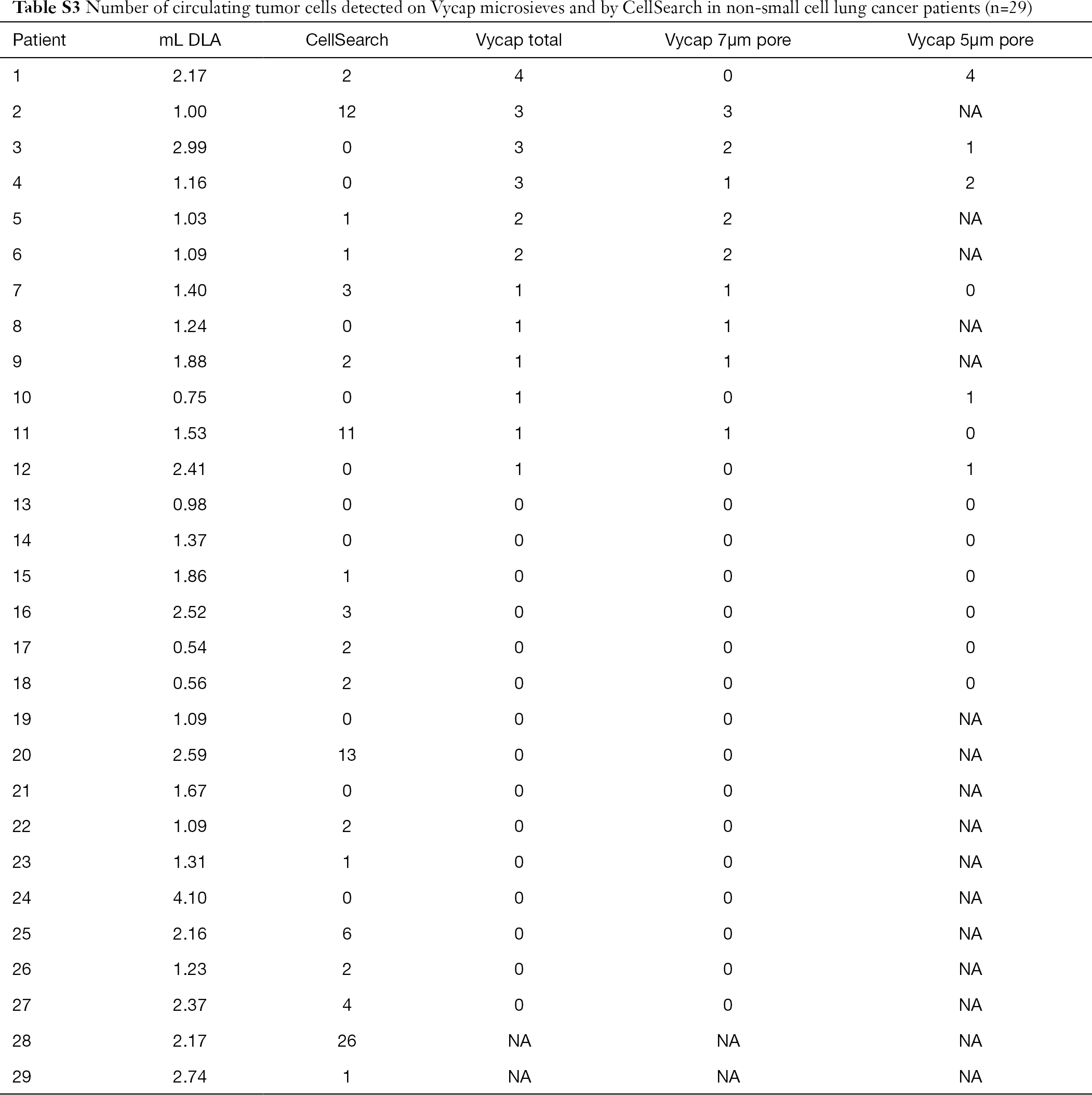 The VyCAP microsieve filtration system is developed for 7.5 mL blood samples to enumerate CTC. However, CTC are hardly detected in the peripheral blood of even advanced stage NSCLC patients. DLA has been shown to increase CTC yield (11-13). The current golden standard for CTC detection, the FDA cleared CellSearch system, is limited by the number of leukocytes it can process (11). In blood this poses no limitation, but in DLA product it severely restricts the volumes of DLA product that can be screened for CTC. Therefore, we attempted to use the VyCAP system to filter CTC from DLA product, which differentiates CTC based on their size and rigidity. We expected it to be less limited in the volume of DLA that could be processed. However, while the 7 µm microsieves filtered the majority of samples, the 5 µm VyCAP microsieves had problems with the formation of cell aggregates and the different composition of the DLA product, resulting in clogging of the microsieves. Fixation time was the only factor found to be associated with failure of samples to filter. The fixative is necessary to avoid the necessity to process the samples immediately after the DLA procedure. Although the underlying fixation process of the used fixative (Transfix) is unknown, it was demonstrated that the time the DLA samples was exposed to the fixative influences the ability of VyCAP microsieves to filtrate DLA product and detect CTC. Other parameters may also be of influence as well, e.g., the presence of debris in the Vycap disposable waste compartment, or temperature and leukapheresis composition. Though we found no association of filtration failure with platelet counts, we did observe platelets in the microsieves. Therefore, other anticoagulants may have beneficial effects on clogging. However, increasing the amount of ACDA for anticoagulation did not improve filtration. We believe that more research is required to optimize the protocol for processing DLA product with VyCAP microsieves before they can be effectively used.

While not yet optimized, we did observe a high recovery percentage of the spiked MCF-7 cells using only the 7 µm microsieve. Yet CTC were detected in less patients with the microsieves (44%) compared to CellSearch (63%). The number of detected CTC was also significantly lower by VyCAP, reinforcing results found by Andree et al. (13). When combining CTC counts from CellSearch and VyCAP, CTC detection increased to 81% of patients.

In conclusion, the used VyCAP filtration is not suitable for DLA product due to clogging of the 5 µm microsieves. This appears to be caused by the time the DLA product is exposed to the fixative in the Transfix tubes. Workflows need to be optimized to be able to process DLA product and adjustments are necessary for filtration of larger DLA product volumes.

Funding: The authors are part of the CANCER-ID consortium which has received support from the Innovative Medicines Initiative (IMI) Joint Undertaking under grant agreement No 115749. VyCAP provided services at a discounted rate and the Cancer Research Funds provided a grant for partly covering the costs of filtration systems. The Funding sources had no influence on the gathering of data, interpretation of results or publication.

Ethical Statement: The authors are accountable for all aspects of the work in ensuring that questions related to the accuracy or integrity of any part of the work are appropriately investigated and resolved. All patients gave informed consent. The study was approved by the regional Medical Ethical Committee (NL55754.042.15) and registered in the Dutch trial register (NL5423), conducted in accordance with the Declaration of Helsinki (as revised in 2013).