The mutational landscape of lung adenocarcinomas is complex and defined by heterogeneous subpopulations of tumors that can be addicted to oncogene-driven proliferative and anti-apoptotic signaling (1). Epidermal growth factor receptor (EGFR) mutations which were identified in 2004 (2-4)—are the poster children for the concept, as lung adenocarcinomas that harbor activating kinase domain EGFR mutations become addicted to deranged EGFR signaling and are susceptible to small-molecule compounds that disrupt EGFR activity (5). The clinically-relevant and most frequent EGFR mutations are inframe deletions/insertions (around amino-acid residues 747 to 752) of exon 19 (these account for up to 40-50% of all EGFR mutations) and the L858R mutation (this accounts for up to 30-40% of all EGFR mutations) of exon 21 (5-7). The transcribed EGFR mutant proteins favor the active kinase state, induce sustained mitogen-activated protein kinase (MAPK) and phosphatidylinositol-3-kinases (PI3K) cascades, resulting in hyperproliferative and anti-apoptotic cell phenotypes (5). Acute inhibition of EGFR through tyrosine kinase inhibitors (TKIs) in these oncogene addicted lung adenocarcinomas disrupts the intracellular signaling balance, leading to cell cycle arrest and apoptosis (8-10). The concept of “oncogene-addiction” (11) may be the shared basis of pathogenesis for all oncogenic kinase-driven tumors (12-14). These insights into the biology of EGFR mutations translated into the clinical real with the development of the first generation EGFR TKIs gefitinib and erlotinib, both of which are reversible ATP mimetic quinazoline derivatives (5,15,16); and also with the development of the second generation EGFR TKI afatinib, an irreversible inhibitor that binds to the C797 amino-acid residue of EGFR (17). First and second generation EGFR TKIs were originally developed to target the wild-type (WT) EGFR but are significantly more potent against common EGFR mutations and have a favorable therapeutic window (Figure 1) in tumors driven by EGFR-exon 19 deletions or EGFR-L858R (5). Over the last several years, a multitude of randomized clinical trials have compared an EGFR TKI (gefitinib, erlotinib or afatinib) against systemic platinum-based chemotherapies in advanced lung adenocarcinomas. In all of these trials, the response rates (RRs) with the EGFR TKIs exceeded 70% being >2 times higher than platinum-doublets, the median progression-free survival (PFS) times were significantly longer (with a median of approximately 10-12 months) than that with chemotherapy and the median overall survival (OS) times augmented to over 24 months, especially in tumors with EGFR-exon 19 deletions (18)—despite a high rate of cross-over from chemotherapy to EGFR TKI (1,15-17). The combined data from these studies now define the clinical management of EGFR mutated lung cancers. Erlotinib, gefitinib and afatinib are approved worldwide for the first line treatment of lung adenocarcinomas with EGFR-exon 19 deletions or EGFR-L858R mutations (5,18).

The advances brought forth by first and second generation EGFR TKIs not only validated EGFR as an important target for lung cancer but also highlighted some of the limitations of these EGFR TKIs. Acquired resistance to erlotinib/gefitinib and afatinib therapy can come about through multiple biological mechanisms that highlight tumor heterogeneity and adaptability [i.e., a game of whack-a-mole analogy (Figure 2)]: (I) the gatekeeper kinase EGFR-T790M mutation that modifies ATP affinity, drug binding properties and shifts inhibitory curves (5); (II) activation of bypass signaling cascades that reactivate the MAPK and PI3K downstream pathways (5); and (III) phenotypic and genomic neuroendocrine transformation that silences the expression of or dependence on EGFR protein (19-21). By far, the selection of tumors harboring the original activating EGFR mutation with concurrent EGFR-T790M is the most common (>50-60%) mechanism of acquired resistance to first/second generation of EGFR TKIs (5,22-26). We and others first identified EGFR-T790M in 2005 (22,27), which leads to a threonine (T) to a methionine (M) amino-acid change at the 790 “gatekeeper” regulatory position of the EGFR kinase (22,27). In addition to its effect on ATP affinity and drug binding (5), EGFR-T790M can stimulate other oncogenic signals—such as the β-catenin pathway (23). Originally, EGFR-T790M was reported as an acquired mutation after exposure to first generation EGFR TKIs; however, recent progress with sensitive sequencing technologies has revealed that pre-existing EGFR-T790M clones can be detected in patients with TKI-naïve tumors (28); as indicated in Figure 2. In this context, emergence of EGFR-T790M may be due to selection of “EGFR-T790M-positive” clones under pressure from a first/second generation EGFR TKI (Figure 2). 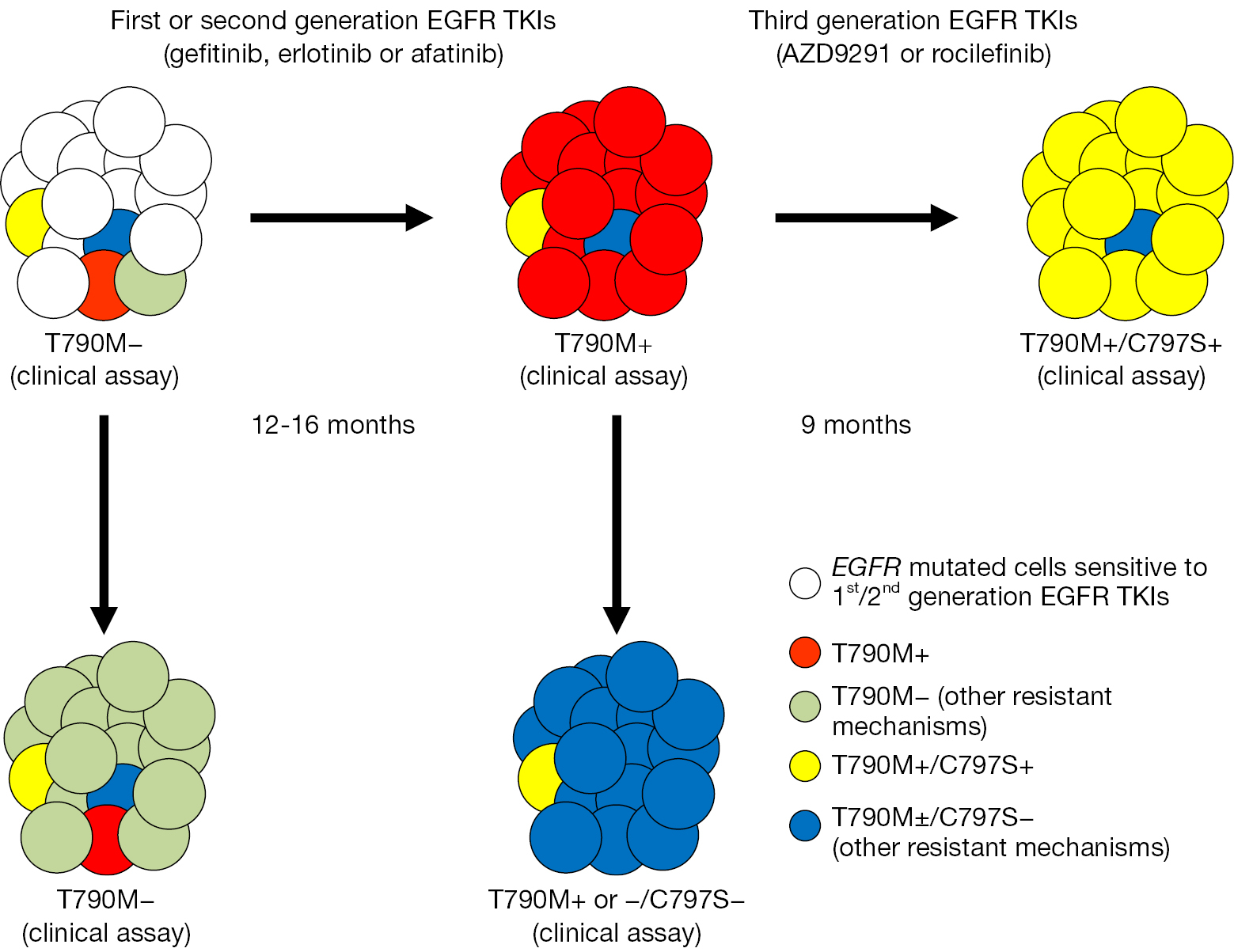 Figure 2 Clonal selection of heterogeneous mass of epidermal growth factor receptor (EGFR) mutated lung adenocarcinomas under pressure of EGFR tyrosine kinase inhibitors (TKIs). The graphical display portrays a hypothetical sequence of changes in clonal predominance upon long-term exposure/adaptation of the tumor mass to first/second and subsequently third generation EGFR TKIs. We highlight clones that have the secondary EGFR-T790M and the tertiary EGFR-C797S mutations. Note that pre-existing mutations may or may not be detected in the clinical setting. This figure attempts to make visualization of the relentless game of whack-a-mole that is constantly being “played” between TKIs and a highly heterogeneous/adaptable cancer.

Since we first reported that an irreversible EGFR TKI can inhibit EGFR-T790M in vitro (29), efforts has been made to identify potent irreversible (i.e., C797-binding) EGFR TKIs to overcome resistance caused by EGFR-T790M. However, the initial selected clinical compounds (i.e., second generation EGFR TKIs such as afatinib and dacomitinib) failed to induce responses in the clinical acquired resistance to gefitinib/erlotinib setting (5). These disappointing results can be explained by lack of EGFR mutant selectivity of second generation EGFR TKIs and their inexistent therapeutic window towards EGFR-T790M when compared to WT EGFR (Figure 1). Afatinib and others in the same class are extremely potent WT EGFR inhibitors and achievable serum/plasma levels (limiting toxicities include skin and gastrointestinal adverse events) in patients are unable to inhibit EGFR-T790M bearing lung adenocarcinomas (5,6,30).

Despite the thrilling responses seen with AZD9291 and rociletinib in lung adenocarcinomas with acquired resistance to gefitinib, erlotinib or afatinib harboring the recalcitrant EGFR-T790M mutation (32,33), it is painfully evident that tumor plasticity and selection pressure continue to drive tumor adaptation and resistance to third generation EGFR TKIs (Figure 2). The clinical investigators of the AZD9291 clinical trials have convincingly shown that biological mechanisms of resistance to this drug can be readily identified in cell-free plasma DNA from patients (34). The most frequent (40% of 15 EGFR-T790M cases treated with AZD9291 in the AURA study) mechanism identified was the acquisition of the EGFR-C797S mutation in exon 20 of EGFR. These investigators and other show in preclinical models that EGFR-exon 19 deletion + T790M + C797S and EGFR − L858R + T790M + C797S generate proteins that are resistant to AZD9291, rociletinib and all irreversible EGFR TKIs (including quinazolone- and pyrimidine-based compounds) by impairing covalent binding of these drugs to the C797 amino-acid residue of EGFR (34-36). Plasma samples also showed that another 33% of cases with AZD9291 progression only had EGFR-T790M and the original sensitizing mutation detected (Figure 2), and in another 27% of cases the EGFR-T790M was no longer detected (34). Although the plasma DNA was unable to evaluate for non-EGFR mutational mechanisms of acquired resistance, plentiful preclinical reports using third generations EGFR TKIs (including AZD9291) have consistently demonstrated bypass activation of the MAPK-ERK-RAS pathway (through MAPK1 amplification, downregulation of negative regulators of ERK, NRAS mutation/amplification, KRAS amplification among others) as a major escape valve to EGFR inhibition (37,38). The clinical investigators of the rociletinib clinical trials have also demonstrated similarly that resistance to rociletinib in the TIGER-X study can be accompanied by putative bypass mechanisms in the presence or absence of EGFR-T790M or EGFR-T790M amplification (39). In addition, their group also reported neuroendocrine transformation of adenocarcinomas to small cell lung cancer with genotypic/phenotypic silencing of EGFR protein expression as a mechanism of resistance in 16% (2/12 cases) of rociletinib re-biopsies (39). Future reports of tumor and liquid biopsies of lung adenocarcinomas resistant to third generation EGFR TKIs will help define the true frequency of EGFR-C797S, MAPK pathway activation and small cell transformation as mechanisms of resistance to this new class of TKI (Figure 2).

EGFR mutated NSCLCs (those with exon 19 deletions or L858R) have come a long way in the last decade. Most patients with a new diagnosis of advanced EGFR mutated NSCLC in 2015 can expect to receive multiple lines of monotherapy with first, second and third generation EGFR TKIs and can anticipate a median OS that exceeds 2-3 years, which is undoubtedly a tremendous success given that a median OS in pre-EGFR TKI era was less than 1 year. However, the use of monotherapies with EGFR TKIs has also underscored the painful reality that a relentless game of whack-a-mole is constantly being played between TKIs and a highly heterogeneous/adaptable cancer; with the lung adenocarcinoma eventually winning out through mutations (EGFR-T790M and/or C797S), bypass mechanisms or histologic/genotypic transformation (Figure 2). The next decade of research milestones for EGFR mutated lung adenocarcinomas will need to address current unmet clinical needs; which include: the role of first, second and third generation EGFR TKIs in the management of earlier stages (I-III) of NSCLC, the need for improved management of difficult-to-treat sanctuary sites such as the central nervous system (40), and the requisite for treatment strategies (most likely combination therapies with PI3K/MAPK inhibitors, immunotherapies or cytotoxic agents) that can delay or overcome acquired resistance to first, second and third generation EGFR inhibitors. We hope that we will eventually “catch all moles” (Figure 2) and “win” the game between TKIs and oncogenic kinase-driven tumors.