The risk of post-surgical recurrence is still problematic even when locoregional control is thought to have been achieved by complete surgical resection. For example, a Japanese lung cancer registry study (n=18,973) reported that the disease-free survival rate at 5 years after pulmonary resection was 67.8% (1). To improve the outcomes of surgically resected non-small cell lung cancer (NSCLC) patients, several clinical trials employing tyrosine kinase inhibitors (2) or new chemotherapeutic regimen (3) have been performed. In addition to these efforts to develop novel adjuvant therapies, evaluation of the personal risks of recurrence is an important issue for a better post-surgical care (4), including the detection of post-surgical minimal residual disease (MRD) (5). If we are able to exclude patients who do not relapse from the candidates of adjuvant therapy, it will eliminate unnecessary adverse events or costs.

Circulating tumor DNA (ctDNA) analysis, which detects mutations of circulating cell-free DNA (cfDNA) that is shed by tumor cells, is a useful technique for detecting mutations in tumor cells. Detecting mutations in EGFR, including the T790M resistant mutation, is already used for clinical decision-making in advanced NSCLC patients (6). It has been reported that ctDNA analysis prior to the surgery in early-stage lung cancer patients can detect somatic mutations in tumors at high sensitivity and specificity (7), and that ctDNA analysis is able to detect mutations which will present even in a heterogeneous manner in tumor tissues (8,9). Additionally, recent studies have suggested that ctDNA can be a potential biomarker for the assessment of post-surgical MRD (10), as well as a potential predictor for the disease progression prior to radiological modalities (11).

In early-stage lung cancer patients, tumor markers are only available by blood tests and are used to estimate tumor burden after pulmonary resection. Although some retrospective analyses have reported that some tumor markers are prognostic factors (12,13), none are currently recommended as a biomarker to select patients with poorer prognosis in any lung cancer treatment guidelines. Therefore, several groups have evaluated the clinical implication of more sensitive indicators, among which ctDNA detection is a useful candidate (11,14-22). A recent study also reported that ctDNA levels rapidly decreased after radical tumor resection, and that ctDNA levels between postoperative day 3 (POD 3) through 1 month (POD 1M) could be used as baseline values for postoperative lung cancer surveillance (20).

Despite the many reports of ctDNA detection in surgically resected lung cancer patients, it is unclear if ctDNA detection is superior to testing tumor markers. Additionally, it is unclear if ctDNA analysis should be performed postoperatively, preoperatively, or both. To answer these questions, we performed this prospective pilot study on 20 clinical stage IIA–IIIA lung cancer patients. We present the following article in accordance with the REMARK reporting checklist (available at http://dx.doi.org/10.21037/tlcr-20-505).

Between January 2018 and May 2019, 23 lung cancer patients with clinical stage IIA–IIIA disease who underwent complete surgical resection (inclusion criteria) were intended to be included in this study. Patients who received neoadjuvant chemotherapy or had advanced malignancies other than lung cancer within the past 5 years were excluded (exclusion criteria). Among these 23 patients, one patient without enough plasma sample and two patients who refused the enrollment were excluded from the study. Finally, the data of 20 patients were analyzed in this study. The cohort consisted of 18 men and 2 women with a median age of 69 (range, 37–88) years; there were four squamous cell carcinomas, 13 adenocarcinomas, two adenosquamous cell carcinomas, and one small cell carcinoma. The details of patient backgrounds are summarized in Table 1. Seven patients received adjuvant chemotherapy and 13 did not. This study was approved by the Institutional Review Board of Kindai University Faculty of Medicine [30-009]. Written informed consent was obtained from each patient. All procedures performed in this study were in accordance with the Declaration of Helsinki (as revised in 2013). 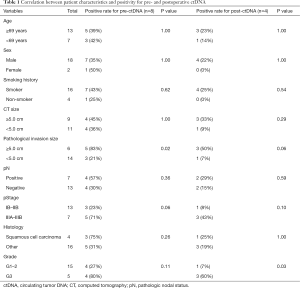 Blood samples were collected in cell-free ctDNA tubes (Roche Diagnostics, Mannheim, Germany) and stored at room temperature. Samples were processed within 1 week of collection by centrifuging the blood for 10 min at 1,600 ×g. The plasma was stored at −80 °C until use. The entire plasma sample [up to 4 mL per case (range, 3–4 mL)] was used for cfDNA extraction. Plasma cfDNA was purified using an AVENIO cfDNA isolation kit (Roche Diagnostics), according to the manufacturer’s instructions. The quality and quantity of the DNA were verified using a NanoDrop 2000 device (Thermo Fisher Scientific) and the PicoGreen dsDNA assay kit (Life Technologies, Carlsbad, CA, USA). Extracted cfDNA samples were stored at −80 °C until analysis.

Fisher’s exact test was used to compare differences in categorical variables. Recurrence-free survival (RFS) was defined as the interval between the date of surgery and the date of recurrence or death by any cause. RFS was estimated by the Kaplan-Meier method and compared using the log rank test. A P value <0.05 was considered statistically significant. All data were analyzed using JMP version 13.0 software (SAS Institute, Cary, NC, USA).

Comparison of mutational status between primary tumors and cfDNA 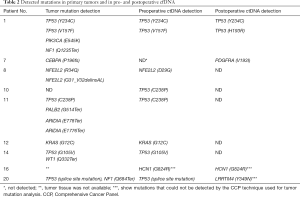 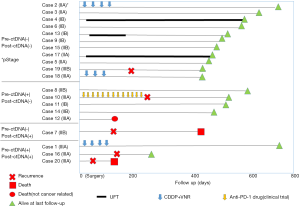 Figure 1 Swimmer plot for each patient based on their pre- and postoperative ctDNA status. The survival periods of each patient are summarized according to pathological stage, type of adjuvant therapy, and recurrence data. 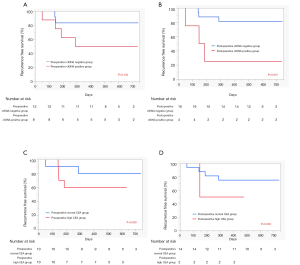 There are several techniques to detect ctDNA, including PCR-based (7,23), NGS panel based, and be spoked NGS (10). In this study, using a next-generation sequencing (NGS)-based panel test for cfDNA analysis, we found that detecting mutations in cancer-related genes from postoperative ctDNA (POD 3–12) predicted poor patient outcomes. This finding was compatible with a recent study by Chen et al. (20) that showed postoperative ctDNA detection (POD 3 or POD 1 month) was significantly correlated with RFS. Although the study by Chen et al. detected mutations in only nine cancer-related genes (EGFR, KRAS, ERBB2, BRAF, PIK3CA, ALK, RET, MET exon 14 skipping, and TP53), using an NGS-based detection platform, our study revealed that detecting other lung cancer-related genes (such as PDGFRA, HCN1, and LRRTM4) from ctDNA can also be prognostic. Therefore, we consider that postoperative cfDNA analysis with a comprehensive genetic panel will help to identify patients who may have high risk of post-surgical recurrence.

Conversely, another recent study by Isaksson et al. (17) reported that preoperative ctDNA was a predictor of recurrence in a cohort of 58 patients. Because positive preoperative ctDNA is correlated with tumor size, as shown in our result and by others (20-22), and with lymph node involvement, as shown by others (20,21), we consider preoperative ctDNA positivity to be correlated with advanced disease, but not a simple predictor of recurrence. In fact, the study by Isaksson et al. included 34 stage I patients, which were excluded in our cohort.

We thank James P. Mahaffey, PhD, from Edanz Group (https://en-author-services.edanzgroup.com/) for editing a draft of this manuscript.

Funding: This study was supported by a research grant from the Uehara Memorial Foundation (Suda K).

Reporting Checklist: The authors have completed the REMARK reporting checklist. Available at http://dx.doi.org/10.21037/tlcr-20-505

Ethical Statement: The authors are accountable for all aspects of the work in ensuring that questions related to the accuracy or integrity of any part of the work are appropriately investigated and resolved. This study was approved by the Institutional Review Board of Kindai University Faculty of Medicine [30-009]. Written informed consent was obtained from each patient. All procedures performed in this study were in accordance with the Declaration of Helsinki (as revised in 2013).