Lung cancer is the primary cause of cancer-related death in western countries. In 2020, it is expected to account for 228,820 new cases and 135,720 deaths in the USA. It is the second most common solid tumor type in both genders, after prostate cancer in men and breast cancer in women (1). In Spain occur about 29,503 new cases per year and has been responsible for 22,121 deaths in 2017 (2).

Current standard of care in early and locally advanced NSCLC

In localized stages, stage I and II, surgical resection remains the most important treatment; however, despite the potential curative surgery, approximately 50% of stage IB and 60–75% of stage I–II NSCLC patients will relapse and eventually died from their tumor (4,5).

Many adjuvant studies have been performed, the overall evidence from these studies suggest that adjuvant platinum doublet chemotherapy is beneficial especially in patients with good performance status (PS). The Lung Adjuvant Cisplatin Evaluation (LACE) meta-analysis included five clinical trials evaluating adjuvant cisplatin-based chemotherapy. The LACE meta-analysis included 4,584 patients and had a median follow-up of 5.2 years. The results demonstrated a 5.4% absolute survival benefit at 5 years [HR: 0.89 (95% CI: 0.82–0.96, P=0.005)]. Survival benefits were seen in stage II and IIIA (6). So as the guides recommend (7), surgery should be offered to all patients with stage I and II NSCLC as the preferred treatment, adjuvant chemotherapy should be offered to patients with resected stage II and III NSCLC and can be considered in patients with resected stage IB disease and a primary tumor >4 cm (8). Several factors are also important when making decisions regarding adjuvant therapy: stage, age, chemotherapy regimens, and timing after surgery.

The locally advanced disease is when the tumor exceeds the lung structures, but without clinical evidence of distant spread. Stage III NSCLC is a heterogeneous disease. In the 8th edition of the TNM classification proposed by the International Association for the Study of Lung Cancer (IASLC), accepted by the Union for International Cancer Control (UICC) and the American Joint Committee on Cancer (AJCC), stage III NSCLC includes patients who, in the absence of metastatic disease (M0), present N2 or N3 disease, a tumor with T4 characteristics or one classified as T3N1 (11). These patients could have tumors resectable, potentially resectable and unresectable. The treatment is based on a combination of surgery, chemotherapy and radiotherapy.

A few years ago, radiation therapy was considered standard therapy for patients with stage IIIA and IIIB but presented poor survival with poor local control and early development of distant disease.

Patients with stage IIIA disease with clinically evident N2 nodal spread have an overall 5-year survival rate of only 10–15%, although this fall to 2–5% in those with bulky mediastinal N2 involvement.

The surgical management of stage IIIA NSCLC remains highly controversial and most patients with stage IIIB disease (in the 7th edition of the TNM) are generally considered inoperable.

As a matter of fact, it is reported that at least 80% of patients treated with local therapies alone will have micrometastases and will relapse. The goal of treatment in stage III NSCLC is to increase both locoregional and systemic control of the disease.

Neoadjuvant treatment has theoretical advantages: in vivo assessment of response to chemotherapy and this helps to identify patients who will potentially benefit from chemotherapy; early treatment of micrometastatic disease; downstaging with improved resectability and offers the possibility for the identification of surrogate clinical and biological markers that may correlate with response to therapy and a potential long-term outcome. However, neoadjuvant therapy has potential disadvantages: delay in local therapy, like surgery, due to toxicity and pre-operative complications and risk progression of the disease in chemoresistant patients.

Several phase II and III clinical trials comparing induction chemotherapy or surgery directly have been published. It is difficult to compare some trials with others because they have different inclusion criteria, mix patients with different prognosis, what it means resectable or marginally resectable disease and different induction and post-induction treatments (ITs). Despite this, we can conclude that platinum doublet chemotherapy provides an increase in survival (12-17).

In patients with stage IIIA NSCLC, the neoadjuvant therapy outside the clinical trial show a median survival of 22 months and a 3-year survival rate of 34% (18). The identification of those patients who benefit from surgery after induction chemotherapy is controversial. Results such as those of the Southwest Oncology Group (19) in patients with complete pathological response with a median survival of 30 vs. 10 months in those with residual tumor suggest to avoid surgery in those patients with persistence mediastinal involvement after induction.

New agents with proven activity in metastatic disease have been incorporated into ITs such as gemcitabine, paclitaxel (20), vinorelbine and docetaxel (21), with responses ranging from 44% to 80% and complete resection rates ranging from 67% to 79%. And they also have radiosensitizing capacity.

Despite the available treatments, the survival of patients with completely resected NSCLC remains poor and this is the reason why it is necessary to evaluate new strategies of management of these patients.

We present the following article in accordance with the narrative review reporting checklist (available at http://dx.doi.org/10.21037/tlcr-20-515).

In the curative setting, ICIs are being studied in both early and locally advanced stages.

Typically, we use computed tomography (CT) to evaluate the response to treatment, also to neoadjuvant treatment, but there have been disagreements between the histopathological response rate and the response measured by RECIST which varies between 35% and 41% (23,24).

In different studies, the prognostic of patients with locally advanced NSCLC after neoadjuvant therapy has been based on the change in maximal standard uptake value (SUVmax) on fluorodeoxyglucose positron emission tomography (FDG-PET) scan, tumor size regression, lymph node (LN) status and clinical stage (25-28). These factors are usually evaluated preoperatively, however, sometimes there are significant differences between clinical and pathological stage.

The interpretation of tumor size, inflammatory, stromal or fibrotic components may confuse which would not allow an accurate measurement of the histopathological response after neoadjuvant treatment.

The evaluation of the response to treatment is complicated with the new treatment options such as: the target treatment and immunotherapy. Because of the distinctive biologic mechanism of immune-checkpoint blockade, unconventional tumor response patterns at imaging have been noted in patients treated with ICIs, which antitumor effect does not cause tumor size decrease and where inflammatory effects can influence its size in the images (29). Because of this, the evaluation of the response requires a functional and molecular evaluation. FDG-PET can be used to identify viable tumor but there are also confounding factors such as the avidity for FDG of infiltrated macrophages/monocytes or as the immunological node flare phenomenon which can impress progression by CT and PET but they are only non-caseous granulomas. The observations of Poettgen and collaborators suggest that changes postinduction in SUVmax on FDG-PET scan should be interpreted with caution in larger residual tumor volumes, since high SUVmax levels may be due to macrophage infiltration and not due to viable tumor tissue (30).

From the literature review, many prognostic factors have been identified for patients who have been treated with neoadjuvant therapy based on pathology findings (36,37). These factors are: metastatic LN ratio (38), number of residual metastatic LNs (39), smaller area of residual tumor (40) and negative pleural invasion, percentage of viable residual tumor cells (41), and low total macrophage number in the tumor (42).

Hsieh et al. (46). designed a study whose aim was to analyze the relationship between clinicopathologic factors and survival from the pathologic point of view and to try to identify survival prognostic factors. They found that the total metastatic LN ratio and tumor size were predictive factors for disease-free survival, tumor size greater than 5 cm and total metastatic LN ratio greater than 0.065 could predict the disease-free survival of patients with advanced NSCLC after multimodality therapies followed by surgical resection.

Marulli et al. (47) evaluated the outcomes and prognostic factors in patients with NSCLC and LN involvement who received IT followed by surgery. A total of 86 patients with stage IIIA NSCLC (n=80) or stage IIIB NSCLC (n=6), with pathologically proven LN-positive, underwent platinum-based neoadjuvant chemotherapy followed by surgery between 2000 and 2009. The median OS was 23 months (5-year survival of 33%). Univariate analysis showed that clinical stage (P=0.02), histology (P=0.01), response to IT (P=0.02) and type of intervention (P=0.047) have predictive roles in survival. Better survival was observed without statistically significant differences for pN0 vs. pN+ (P=0.22), downstaged tumors (P=0.08) and left side (P=0.06). Multivariate analysis showed that the only independent predictors of survival were clinical response to neoadjuvant therapy (P=0.01) and age (P=0.03). In conclusion, neoadjuvant chemotherapy in stage III NSCLC seems to be justified by low morbidity and/or mortality and good survival rates. Patients with response to IT showed more long-term benefit.

Multiples studies demonstrated that patients with lung cancer who received neoadjuvant treatment and showed a major pathologic response (MPR) (48) defined as 10% or less viable tumor have a significantly improved survival and this is the reason why MPR has been recognized as a predictor of survival and a potential surrogate endpoint in clinical trials. Table 1 (41,48) and Figure 1 (41) shows the robust improvement in survival in patients with 0–10% residual viable tumor (RVT) compared with patients with RVT greater than 10%. Complete pathologic response (CPR) is defined as no viable tumor. 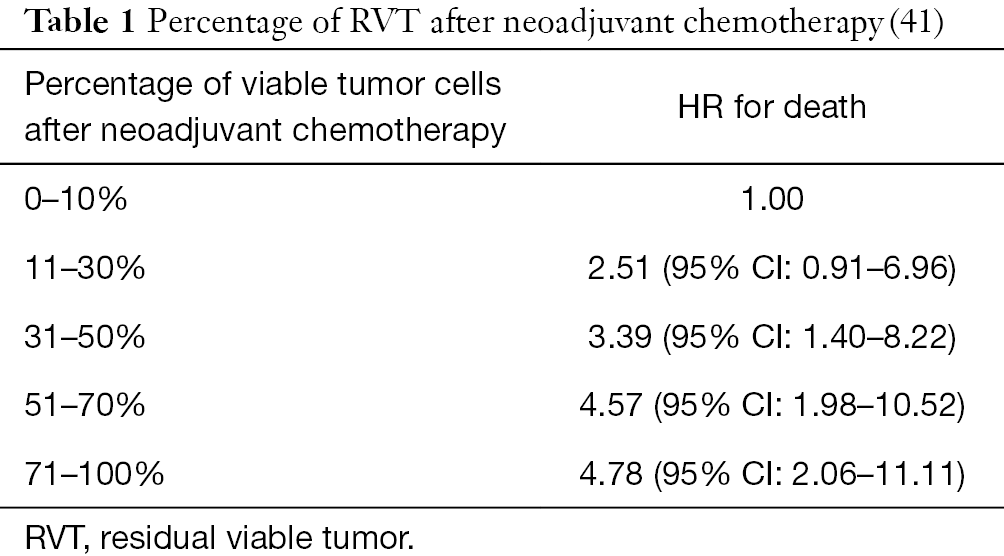 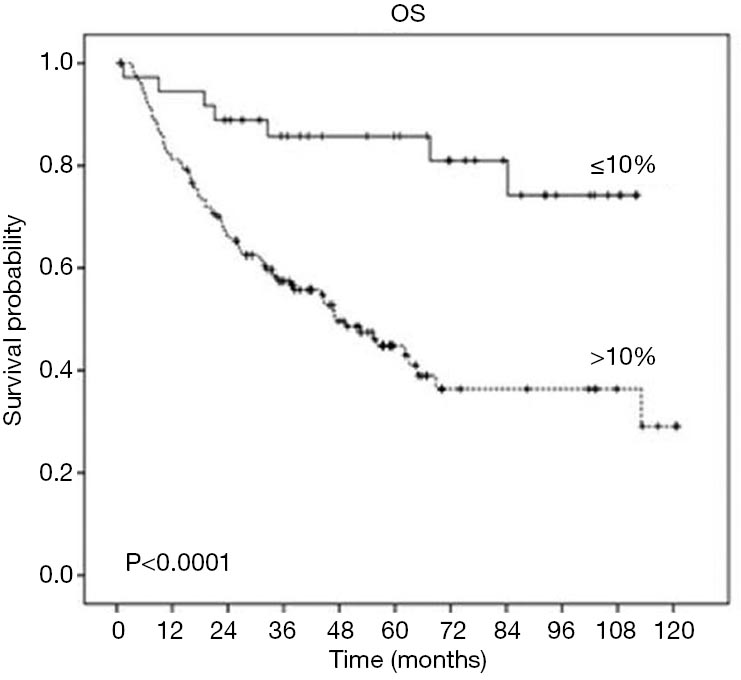 However, few studies have described how the resected surgical specimen of a patient who was treated with neoadjuvant chemotherapy should be evaluated macroscopically and microscopically. Methods of evaluation are described (41) and detailed in Figure 2 (48). 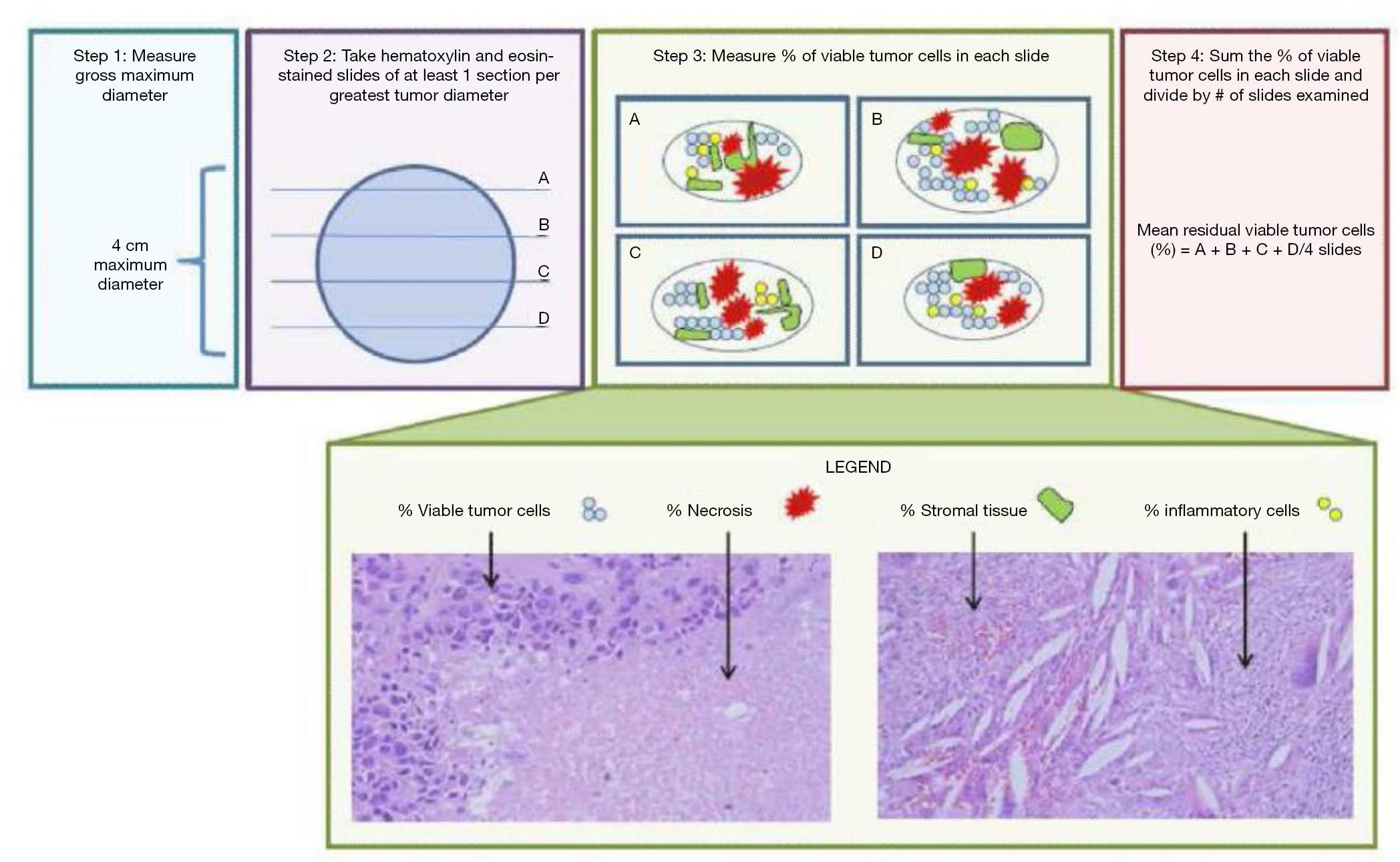 Figure 2 How to evaluate the resected surgical specimen of a patient treated with neoadjuvant chemotherapy (48).

It has been reported that these histological changes associated with treatment could also be found in resected lung cancer pieces without neoadjuvant treatment, which is why it is necessary for the pathologist to know the history of the treatment. The histological changes associated with neoadjuvant therapy usually occur on the periphery of the tumor, while in the tumor with spontaneous regression these changes are seen more in the center (49).

Also it has been found association between OS and the nodal response to neoadjuvant treatment (50-53).

We might think that due to the different mechanisms of action between conventional chemotherapy and immunotherapy, the changes in the pathological response to ICIs could be different from those reported for chemotherapy (Figures 3,4) (49,54,55). 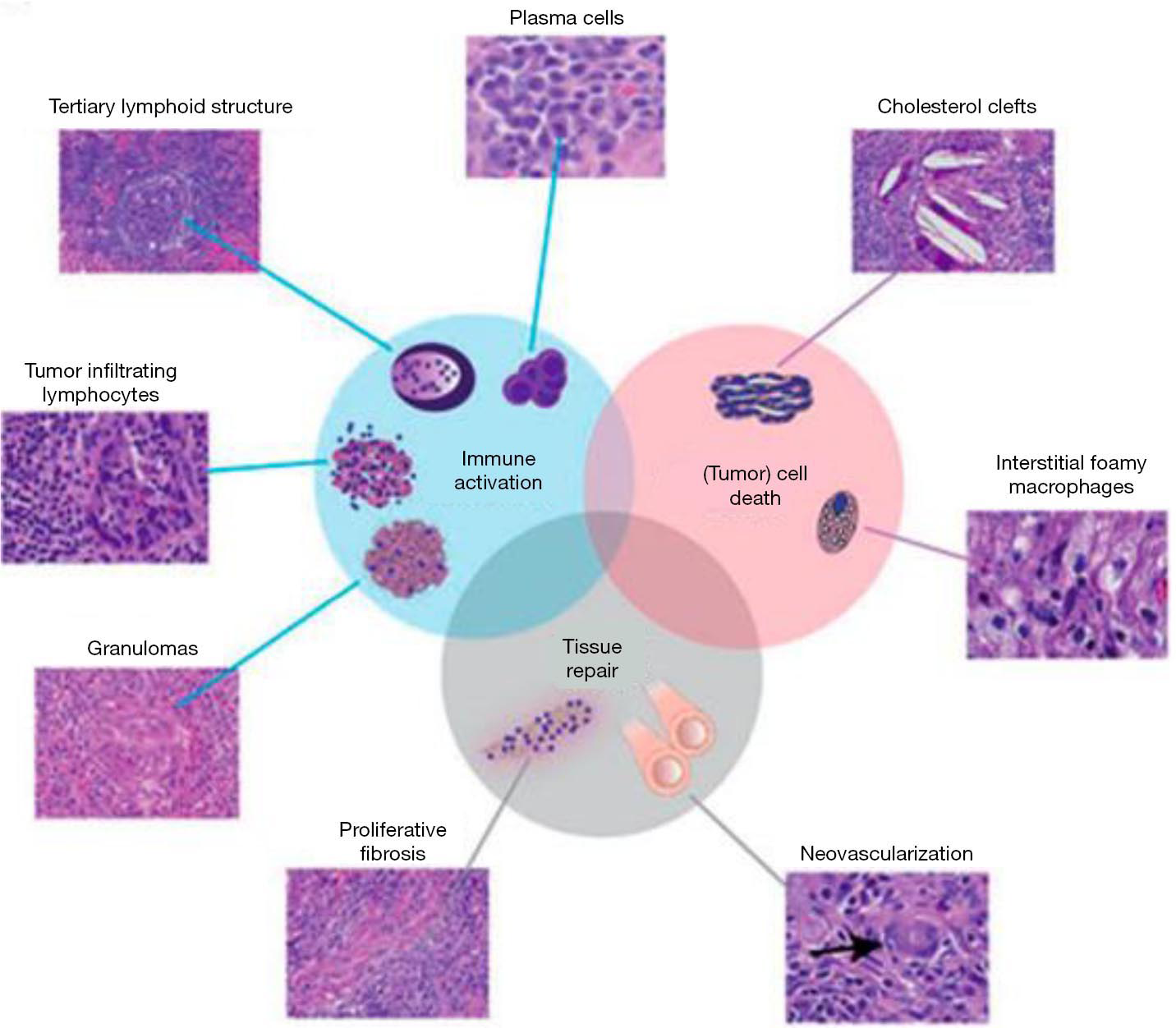 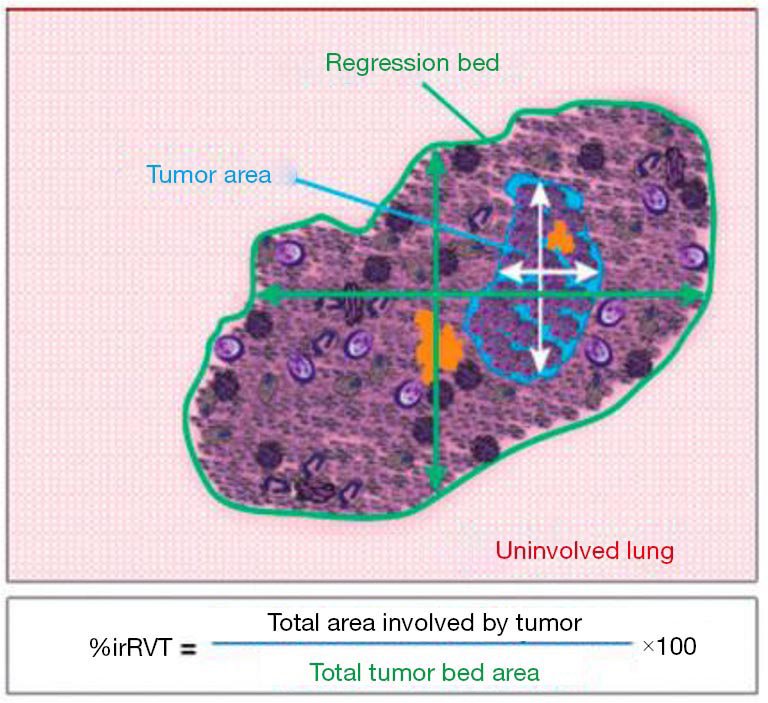 In this review article we tried to describe the different prognostic factors in patients with potentially resectable locally advanced NSCLC receiving neoadjuvant treatment. Neoadjuvant setting is considered an opportunity for studying drug mechanism of action and for finding a surrogate for survival, such as pathologic response to neoadjuvant chemotherapy, that could have the potential to improve the efficiency of trials.

Conflicts of Interest: All authors have completed the ICMJE uniform disclosure form (available at http://dx.doi.org/10.21037/tlcr-20-515). The series “Multimodal management of locally advanced N2 non-small cell lung cancer” was commissioned by the editorial office without any funding or sponsorship. MP served as the unpaid Guest Editor of the series and serves as an unpaid editorial board member of Translational Lung Cancer Research from Sep 2019 to Sep 2021. VC reports personal fees: Roche, BMS, MSD, AstraZeneca, Boehringer. MP reports honoraria as speaker and consultant on advisory boards from: Roche, BMS, MSD, Takeda and Lilly. The authors have no other conflicts of interest to declare.