Epidermal growth factor receptor (EGFR) tyrosine kinase inhibitor (TKI) monotherapies result in improvements in the progression-free survival (PFS) and response rates (RRs) compared to those with platinum-doublet chemotherapies in patients with non-small cell lung cancer (NSCLC) harboring EGFR mutations (1-6). However, most patients with NSCLC harboring EGFR mutations who are administered EGFR-TKI monotherapies eventually acquire resistance and relapse approximately one year after the initiation of treatment (1-6). To improve their outcomes, combination therapies using EGFR-TKIs have actively been developed in recent years.

The authors present the following article in accordance with the TREND reporting checklist (available at http://dx.doi.org/10.21037/tlcr-20-824).

The purpose of this study was to assess the feasibility and recommended dose (RD) of afatinib with bevacizumab in patients with advanced NSCLC harboring EGFR mutations. The primary endpoints were the maximum tolerated dose (MTD) and RD. The secondary endpoints were the toxicity, objective RR, PFS, OS, and afatinib exposure at steady state.

Afatinib was orally administered by continuous once-daily dosing in combination with bevacizumab (15 mg/kg) intravenously administered on day 1 every 3 weeks until disease progression or an unacceptable adverse event (AE) was noted. In the dose-finding cohort, the initial afatinib dose was 30 mg/day. If the tolerability at 30 mg/day was determined, the dose was escalated to 40 mg/day. If the tolerability at 30 mg/day was not determined, the following dose was de-escalated to 20 mg/day. Tolerability was evaluated based on the frequency of dose-limiting toxicities (DLTs) confirmed by the end of cycle 1.

The following toxicities were defined as DLTs: grade 3 or higher diarrhea, skin toxicity, nausea, vomiting, hemorrhage, hypertension, and other non-hematological toxicities under appropriate supportive therapy; grade 2 diarrhea, nausea, and vomiting which continued for 4 days or more under appropriate supportive therapy; grade 4 hematological toxicities; grade 3 or higher febrile neutropenia; and other toxicities that needed discontinuation of afatinib for 8 days or more.

Assessment of safety and efficacy

The severity of AE was evaluated based on the Common Terminology Criteria for Adverse Events version 4.0. Antitumor effect was evaluated radiologically (using computed tomography or magnetic resonance imaging) every 6 weeks. All responses were determined based on the Response Evaluation Criteria in Solid Tumors version 1.1.

Blood samples were collected before the administration of afatinib from day 8 to day 15 as steady state. Peripheral blood samples (3 mL) were collected into vacuum tubes without anticoagulants and centrifuged at 3,000 rpm for 10 min at room temperature, and serum was frozen and stored at –20 °C until analysis.

The afatinib concentration was determined using an ultra-performance liquid chromatography tandem mass spectrometry technique modified from a previously reported method and developed specifically for this study (14). The concentration range of the standard curves was 0.5–100 ng/mL. The bias and precision of the quality control samples were both less than 15%. At the lower limit of assay quantification, the bias and precision were both less than 20%, in accordance with the guidelines provided in the Food and Drug Administration Guidance for Industry Bioanalytical Method Validation (15). Inter-day and intra-day variabilities in precision (expressed as coefficients of variation) ranged from 6.0% to 8.8% and from 2.8% to 4.0%, respectively. The average accuracies ranged from 96.0% to 104.3%. 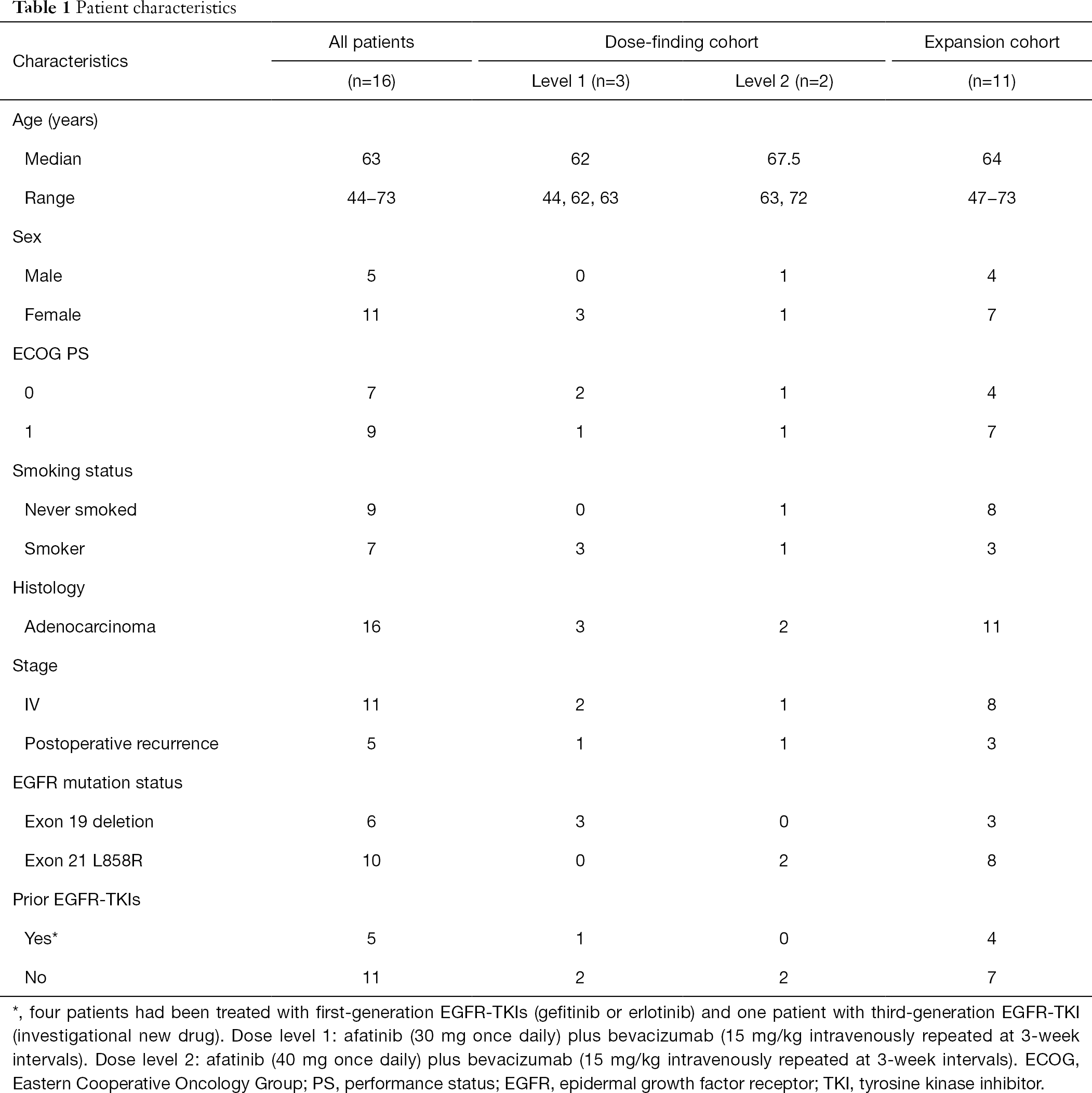 Evaluation of DLTs in the dose-finding cohort

No DLTs occurred at dose level 1. At dose level 2, two of two patients experienced DLTs (grade 3 diarrhea; n=2) in cycle 1. At this point, even with another four patients not experiencing DLTs, the incidence of DLTs at dose level 2 was higher than 30%. From these results, we decided that dose level 2 was greater than the MTD, and dose level 1 was appropriate for the RD. Therefore, we administered patients in the expansion cohort with afatinib at a dose of 30mg once daily plus bevacizumab at a dose of 15 mg/kg intravenously repeated at 3-week cycles. All DLTs recovered soon after the discontinuation of afatinib. Two patients who developed DLTs were able to continue this combination therapy with a reduced dose of afatinib.

AEs in all patients

Table 2 shows the AEs in all treatment courses. The numbers of treatment cycles were median of 12.5 (range, 4–28) cycles at afatinib 30 mg/day, and 6 and 30 cycles at afatinib 40 mg/day. All 16 patients experienced AEs during the treatment (Table 2). There were no grade 4 or 5 toxicities. The frequent (>30%) AEs were diarrhea, rash acneiform, perionychia, mucositis oral, and hypertension. Grade 3 toxicities included diarrhea (18.8%), perionychia (6.3%), and hypertension (6.3%). There were no treatment-related deaths or cases of interstitial lung disease in this phase I study. 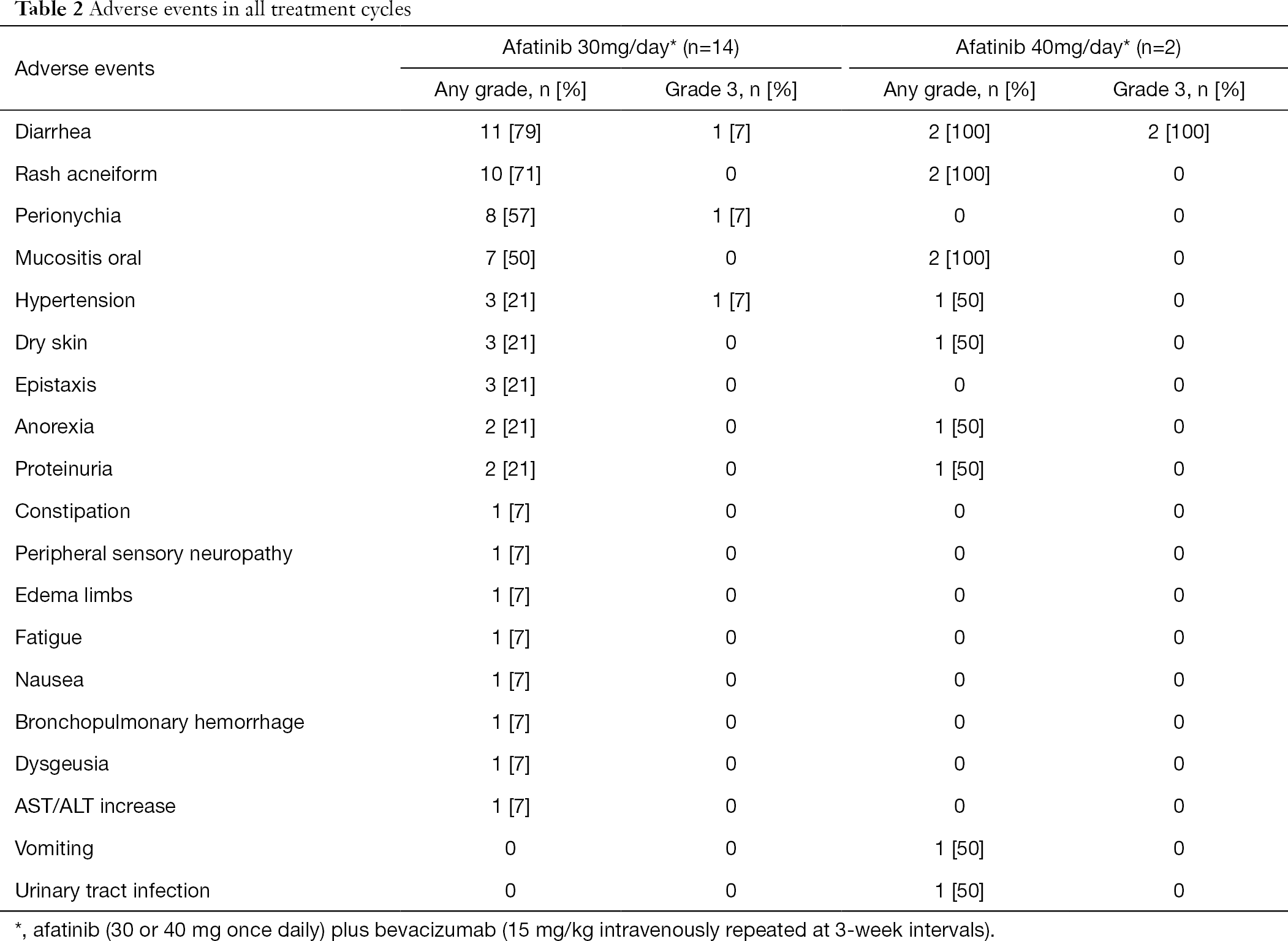 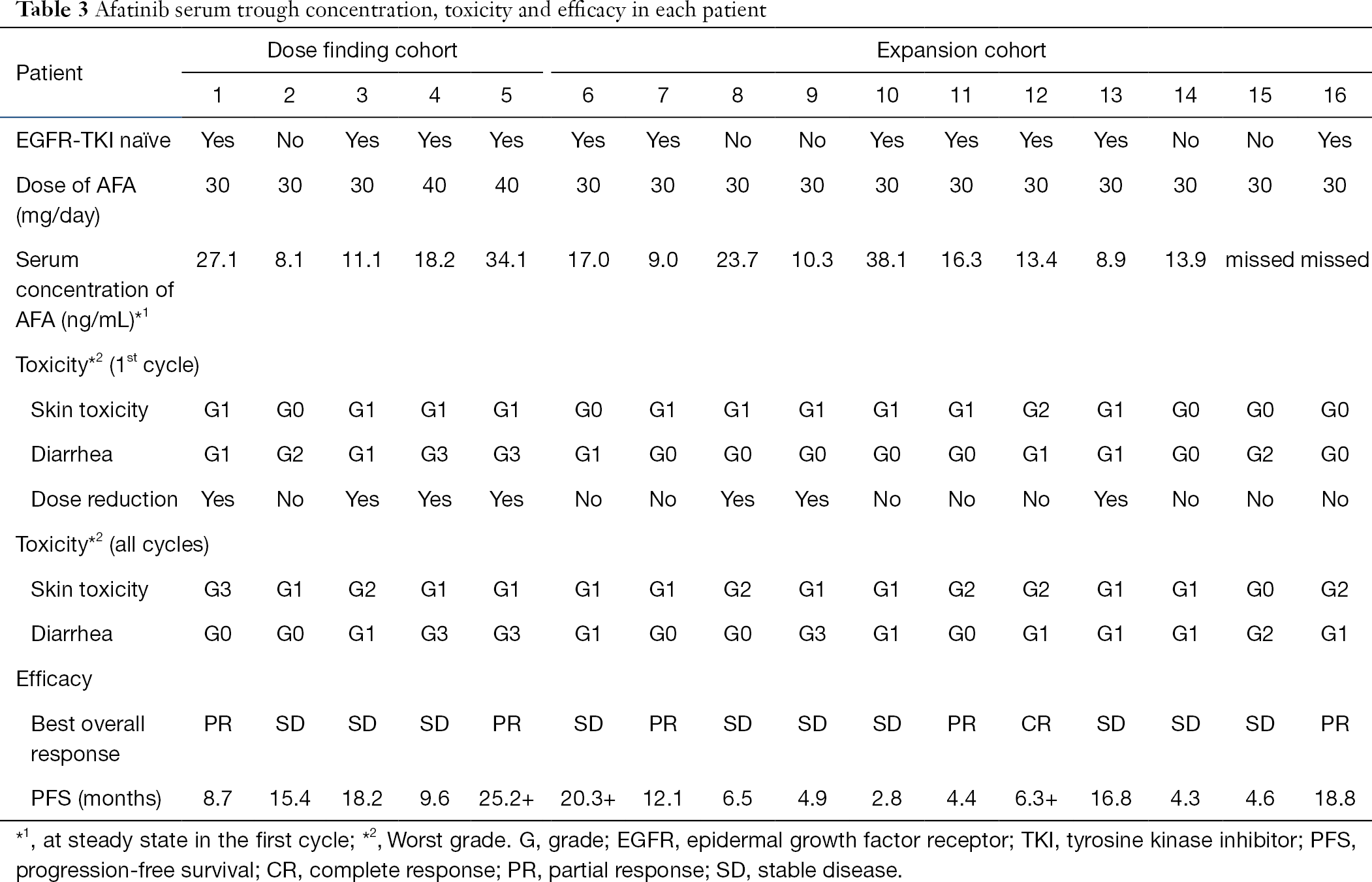 The RRs and disease control rates were 55% and 100% in EGFR-TKI-naïve patients and 0% and 100% in patients previously-treated with EGFR-TKIs, respectively (Table 4). A waterfall plot for the 16 patients is presented in Figure 1. At the data cut-off date, the median follow-up time was 20.3 months. The median PFSs were 16.8 months (95% confidence interval: 4.4–18.8 months) in EGFR-TKI-naïve patients and 4.9 months (95% confidence interval: 4.3–15.4 months) in patients pretreated with EGFR-TKIs (Figure 2). The antitumor effects of EGFR exon 21 L858R and exon 19 deletion are shown in Figures S1-S4. Of the 16 patients, only two patients died of disease progression before data cutoff. 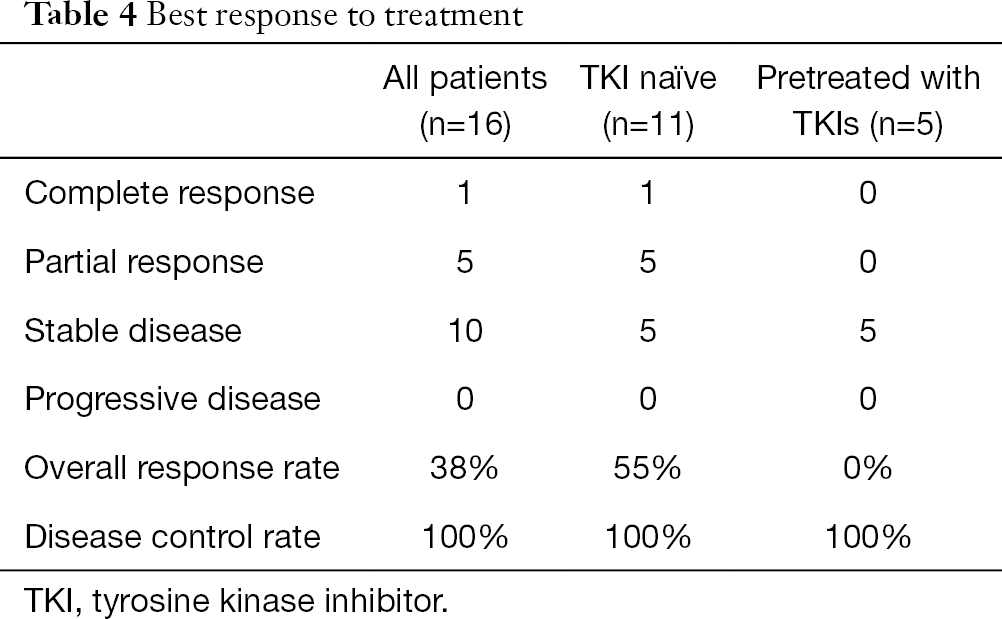 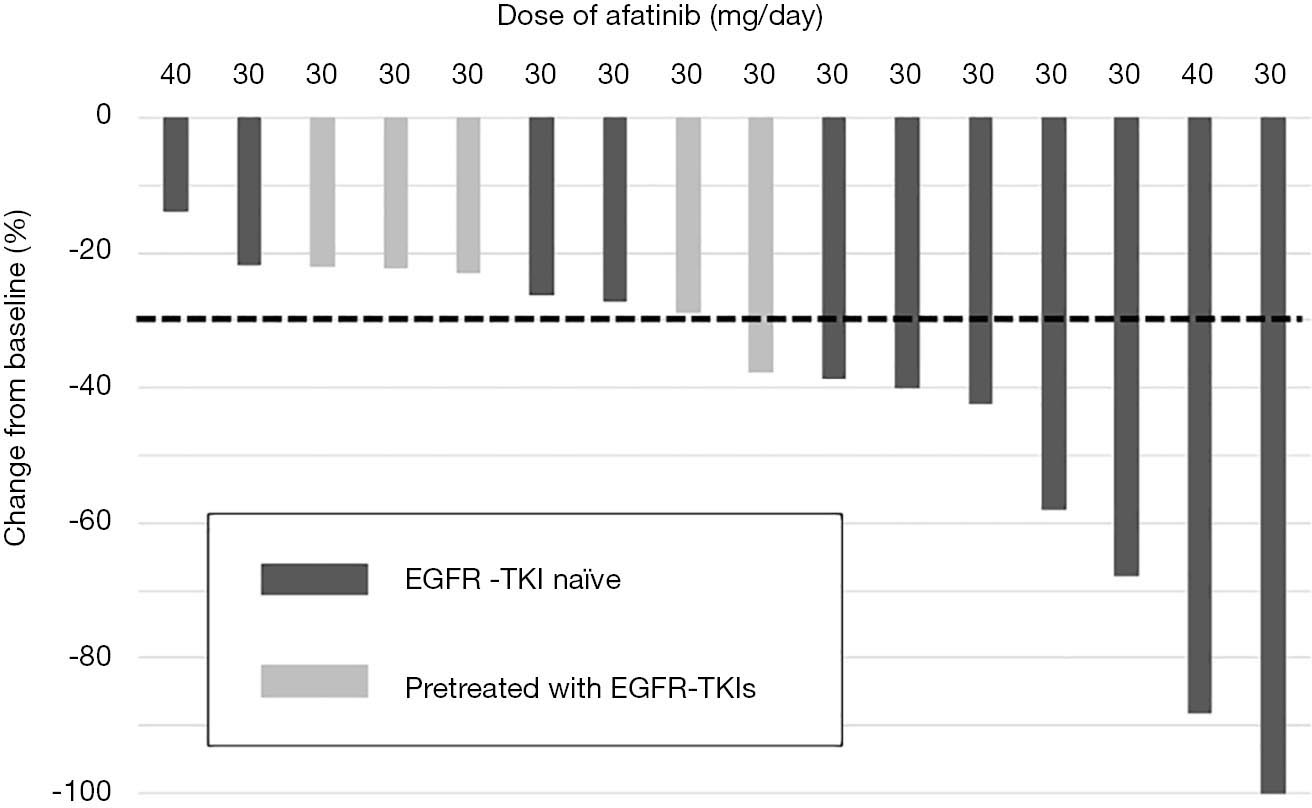 Figure 1 Waterfall plot of the best percentage change in individual patients in response to afatinib with bevacizumab. 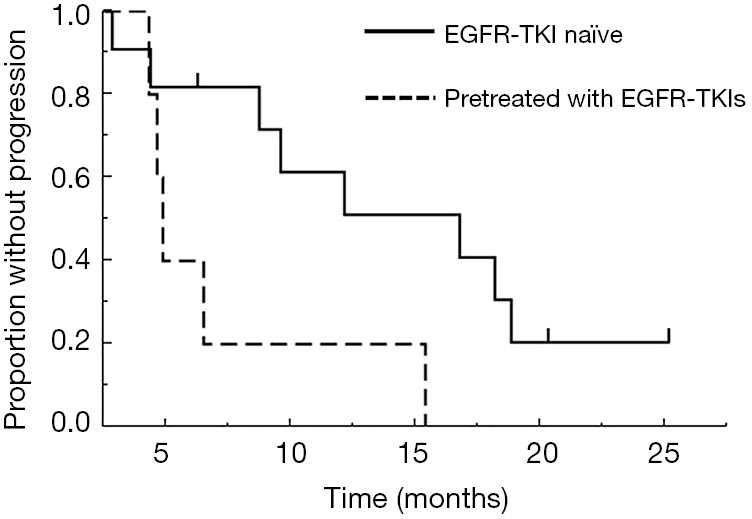 Of 16 patients, 13 had disease progression at the time of data cutoff. The most common site of progression manifesting as lesions was the intrathoracic lesion (10 patients). Only three patients had disease progression due to distant metastatic lesions: bone lesions in two patients and a brain lesion in one patient. Eight patients underwent re-biopsy after acquiring resistance to the combination therapy of afatinib with bevacizumab. T790M mutations were identified in three of eight patients (38%). Gene mutations other than EGFR were not evaluated in this study.

The recommended phase II dose of afatinib monotherapy is 50 mg once daily, according to a phase I trial (17). However, afatinib at 50 mg/day has been judged as intolerable in several phase II trials (18,19). Therefore, afatinib at 40 mg/day has been selected for phase III trials to evaluate the efficacy of afatinib (5,6), and this dose has been approved as the standard dose of afatinib monotherapy globally, including in Japan. However, afatinib at 40 mg/day may be more toxic for Japanese patients than for other populations. In a Japanese subgroup of the LUX-Lung 3 trial, a phase III study that measured afatinib against platinum-doublet chemotherapy for patients with NSCLC harboring EGFR mutations, AEs that required dose reductions developed in 75.9% of patients treated with afatinib at 40 mg/day (20). Additionally, there were no significant differences in the efficacies between afatinib at <40 and ≥40 mg/day in a combined analysis of two phase III trials of afatinib monotherapy (21). Afatinib at 30 mg/day may be an optimal dose for Japanese patients with EGFR-mutant NSCLC, regardless of whether it is administered with or without bevacizumab.

Large inter-individual variability in the Ctrough ss was observed. It has been reported that the severity of diarrhea and rash are correlated with the exposure of afatinib (22,23). However, the Ctrough ss in two patients who developed DLTs involving grade 3 diarrhea (18.2 and 34.1 ng/mL, respectively) were not significantly higher compared to that in other patients. Therefore, there are inconsistencies in the dose-exposure and exposure-toxicity relationships, while we decided that the RD is 30 mg/day.

We greatly appreciate for all the participating patients, their families and caregivers, investigators, and site staffs.

Funding: This study was funded by Department of Respiratory Medicine, Juntendo University Graduate School of Medicine, and Boehringer Ingelheim.

Reporting Checklist: The authors have completed the TREND reporting checklist. Available at http://dx.doi.org/10.21037/tlcr-20-824

Ethical Statement: The authors are accountable for all aspects of the work in ensuring that questions related to the accuracy or integrity of any part of the work are appropriately investigated and resolved. The study protocol was approved by the institutional review boards of Juntendo University Hospital (registration ID 14-134) and Kurume University Hospital (registration ID 14243). Written informed consent was obtained from all patients prior to the study. This study was conducted in compliance with the Declaration of Helsinki (as revised in 2013) and all relevant Japanese laws and regulations. This study was registered at the University Hospital Medical Information Network Clinical Trial Registry (UMIN 000016029).