However, the LENT and PROMISE scores are models that predict the prognosis of all malignant tumors, which may reduce the accuracy of specific types of malignancy. Lung cancer is the leading cause of cancer-related death, with an estimated annual mortality of 631 thousand in China alone in 2015 (8). Few studies have identified prognostic factors of patients with MPE. A retrospective study by Kasapoglu et al. found that high serum C-reactive protein (CRP), low serum albumin, lower pleural protein, and distant metastasis predicted shorter survival in NSCLC patients with MPE (9). Pleural LDH and NLR were demonstrated to be clinical biomarkers for prognostication in lung cancer patients (10,11). Biological parameters like pleural MAC30 (over-expressed meningioma-associate protein) and VEGF (vascular endothelial growth factor) in pleural effusion were predictive for the survival of lung cancer patients with MPE (12,13). However, with oncogenic driver mutations and immunotherapy, these predictive biomarkers and models may underestimate the outcome of these populations and deepen the prediction inaccuracy (14,15). Therefore, it is imperative to develop a predictive model to estimate the survival of lung cancer patients with MPE.

This study was designed to generate a predictive score in selected lung cancer patients with MPE derived from the combination of independent risk factors of death. We present the following article in accordance with the TRIPOD (transparent reporting of a multivariable prediction model for individual prognosis or diagnosis) reporting checklist (available at http://dx.doi.org/10.21037/tlcr-20-1191).

The study was conducted in accordance with the Declaration of Helsinki (as revised in 2013) and approved by the local ethics committee of Jinling Hospital (registration ID. DBNJ329). Informed consent from individuals was waived based on the retrospective nature of this study.

Lung cancer patients with MPE in Nanjing Jinling Hospital from January 2008 to June 2018 were recruited according to the following criteria: (I) aged 18–80 years old; (II) pathological diagnosis of lung cancer; (III) histological or cytological confirmation of malignant pleural effusion; (IV) had received active therapy after the first episode of MPE. These eligible patients were followed up, and survival time was calculated from the first episode of MPE to death. Data regarding age, gender, smoking history, ECOG PS, relapse or not, white blood cell (WBC), NLR, platelet, CRP, serum LDH, serum albumin and globulin, pleural LDH, pathology, tumor, node, metastasis (TNM) stage, and oncogenic driver mutations were collected. Patients with incomplete data were excluded from this study.

Data were analyzed using the statistical software SPSS version 22 (IBM Corp., Chicago, IL, USA). Risk factors affecting prognosis were extracted using the chi-square test and univariate Kaplan-Meier analysis. Variables with a 2-sided P value of less than 0.05 were selected for multivariate Cox proportional-hazards analysis. Different points were given to risk factors according to the RR (risk ratio) value. According to the sum of all risk factors, lung cancer patients were categorized into 3 groups, which were low-risk, moderate-risk, and high-risk. The prognostic score's sensitivity and specificity were tested by the receiver operating characteristic (ROC) curve.

From January 2008 to June 2018, 367 lung cancer patients diagnosed with MPE in Nanjing Jinling Hospital were recruited to the development cohort. The demographic characteristics are shown in Table 1. Fifty-four participants were lost to follow up, and 22 participants stayed alive during the follow-up period. Of the 367 participants, the mean age was 59.1 years, 59.7% were males, and 53.4% were non-smokers. Adenocarcinoma accounted for most lung cancers (77.4%), followed by small or large cell carcinoma and squamous carcinoma. Poor performance status with ECOG PS greater than or equal to 2 was observed in 16.3% of the participants. Of the population, 61.6% were first diagnosed with lung cancer in the first episode of MPE, while 38.4% represented relapse or lung cancer progression since MPE had first occurred. 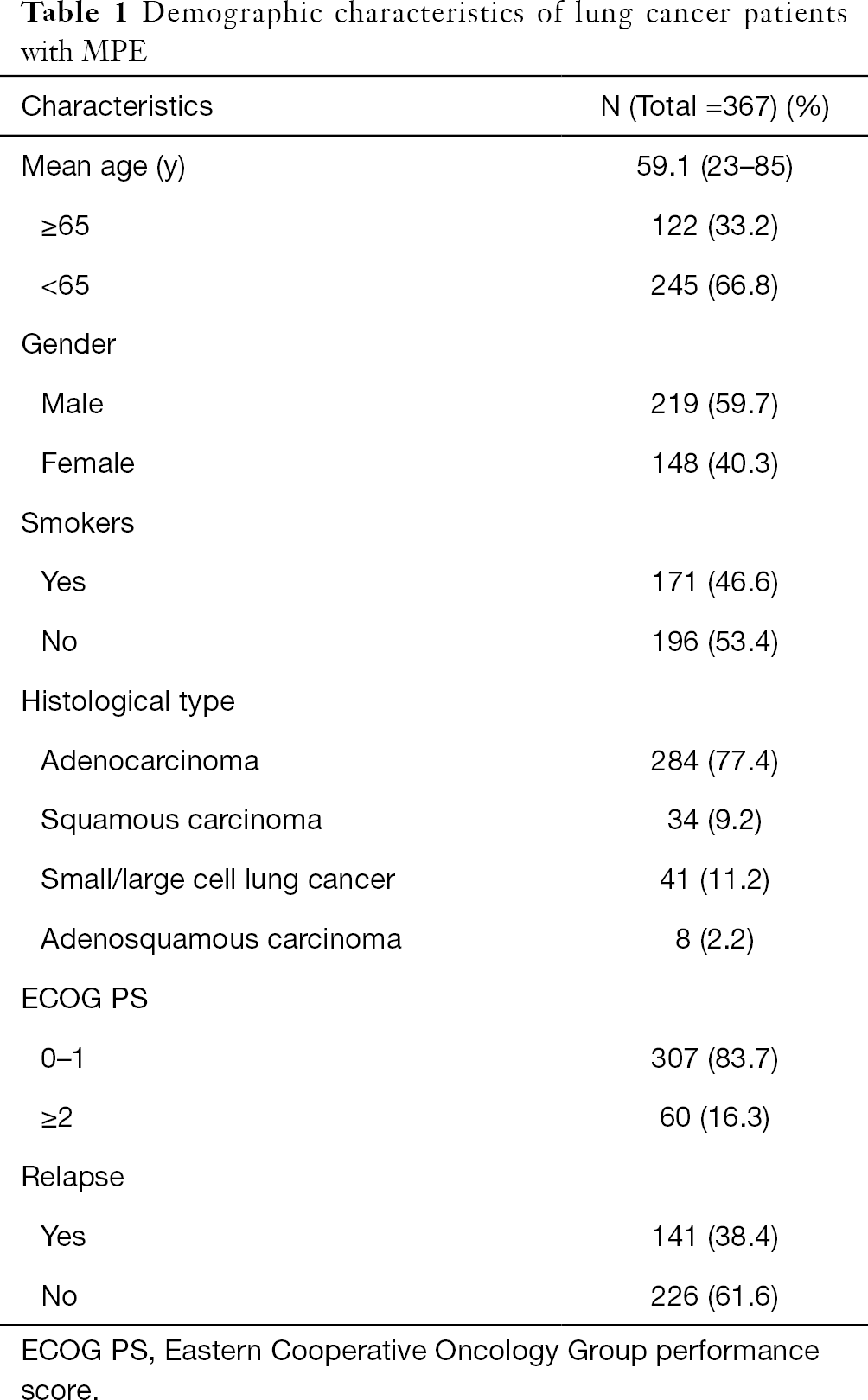 Kaplan-Meier survival analysis was conducted using 367 lung cancer participants. The LENT score was used to categorize participants into moderate-risk and high-risk groups, as lung cancer was designated a high-risk tumor type with at least 2 points (Figure 1A). The PROMISE model's survival curves and the 50–75% risk group and >75% risk group overlapped, as shown in Figure 1B. 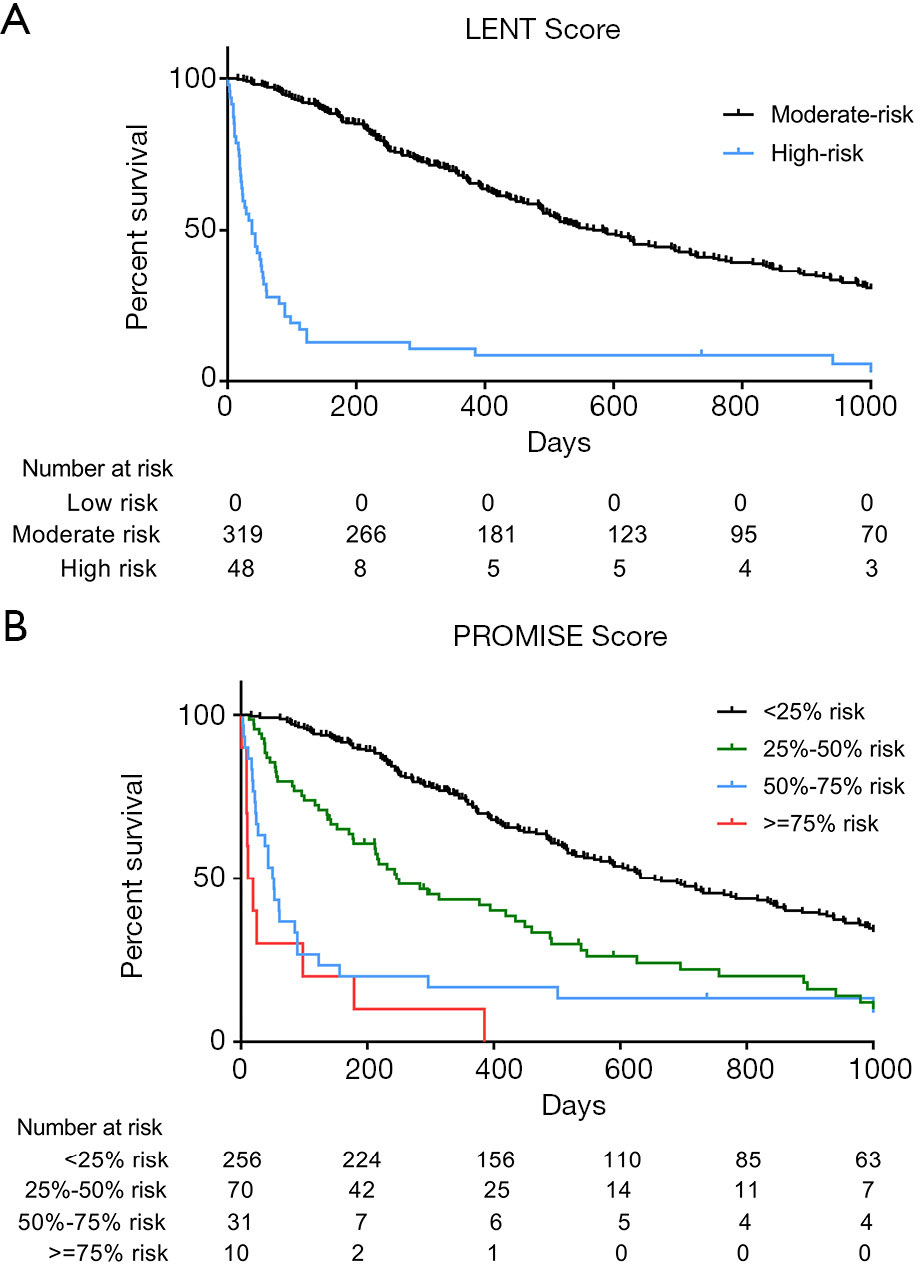 We used univariate analysis to select variables to enter the multivariate Cox proportional-hazards model with the conditional forward method. A total of 12 risk factors were confirmed to be significant by univariate analysis, of which 5 were selected as the predictors of survival (Table 2). Relapse or not, ECOG PS, CRP, pleural LDH, and stage maintained the prognostic significance, and the RR values are also listed in Table 2. Each predictive factor was assigned corresponding scores according to their RR values. Then, lung cancer patients were divided into 3 groups after adding up the points: low-risk (0–4 points), moderate-risk (5–10 points), and high-risk (11–15 points) (Table 3 and Figure 2). 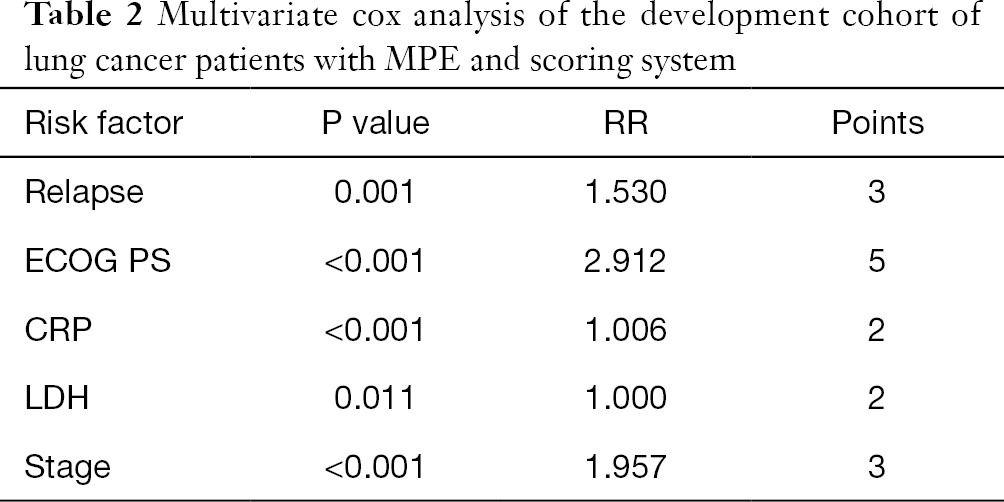 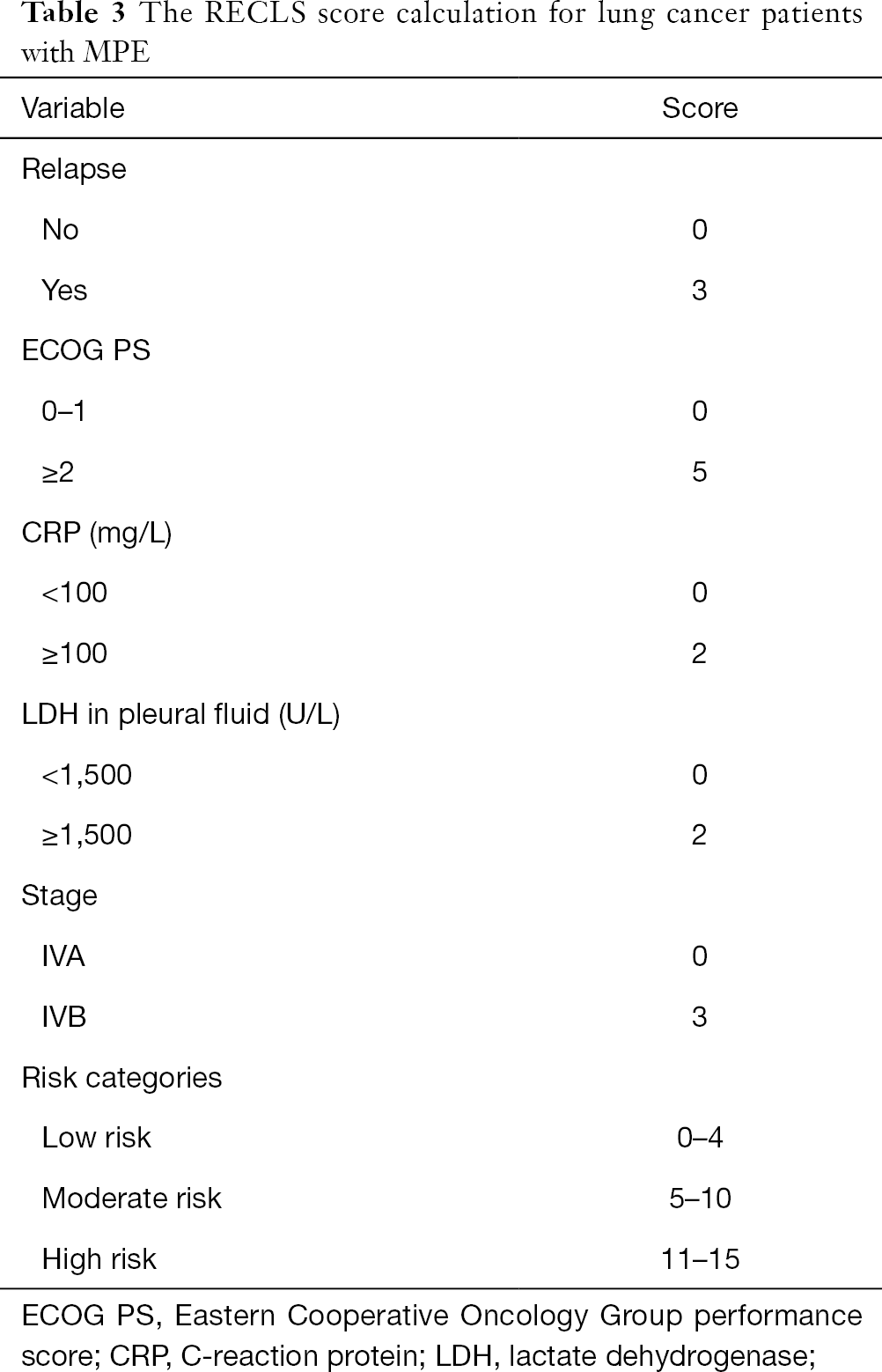 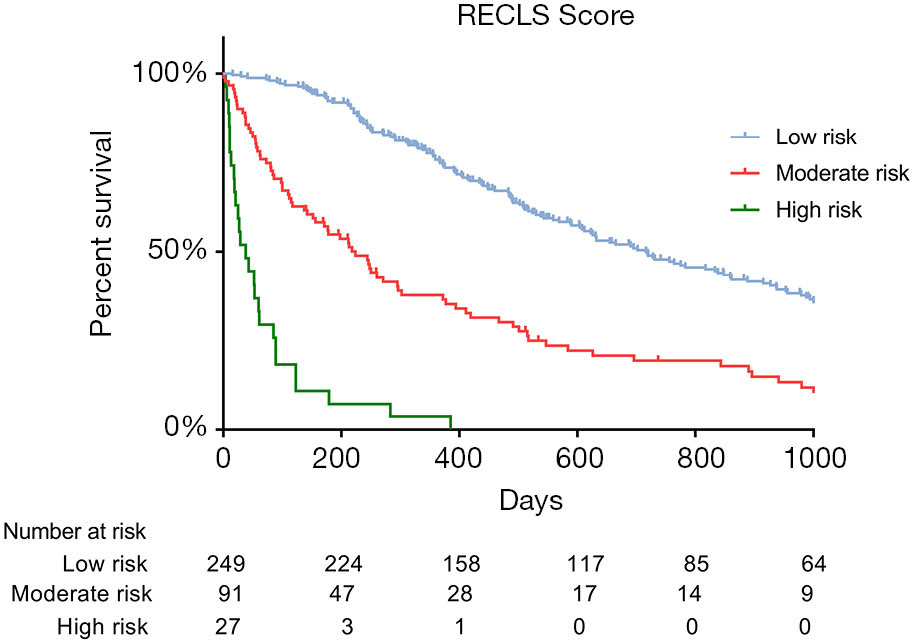 Similarly, we selected 7 variables using the same statistic methods to estimate lung adenocarcinoma participants' survival with MPE. We added oncogenic driver mutations to multivariate Cox proportional-hazards analysis. Except for the 5 risk factors above (relapse or not, ECOG PS, CRP, pleural LDH, and TNM stage), ALB (albumin/globulin ratio), and oncogenic driver mutations were also confirmed be significant to the mortality rate. We made a RECLSAM score proportional to each variable's RR values (Tables 4,5). The survival of the low-risk, moderate-risk, and high-risk groups is shown in Figure 4. The median survival of the low-risk, moderate-risk, and high-risk populations were 783 days, 227 days, and 38 days, respectively. The survival proportions of 1, 6, and 12 months are listed in Table S2. The ROC curves of RECLSAM are also displayed in Figure S1. 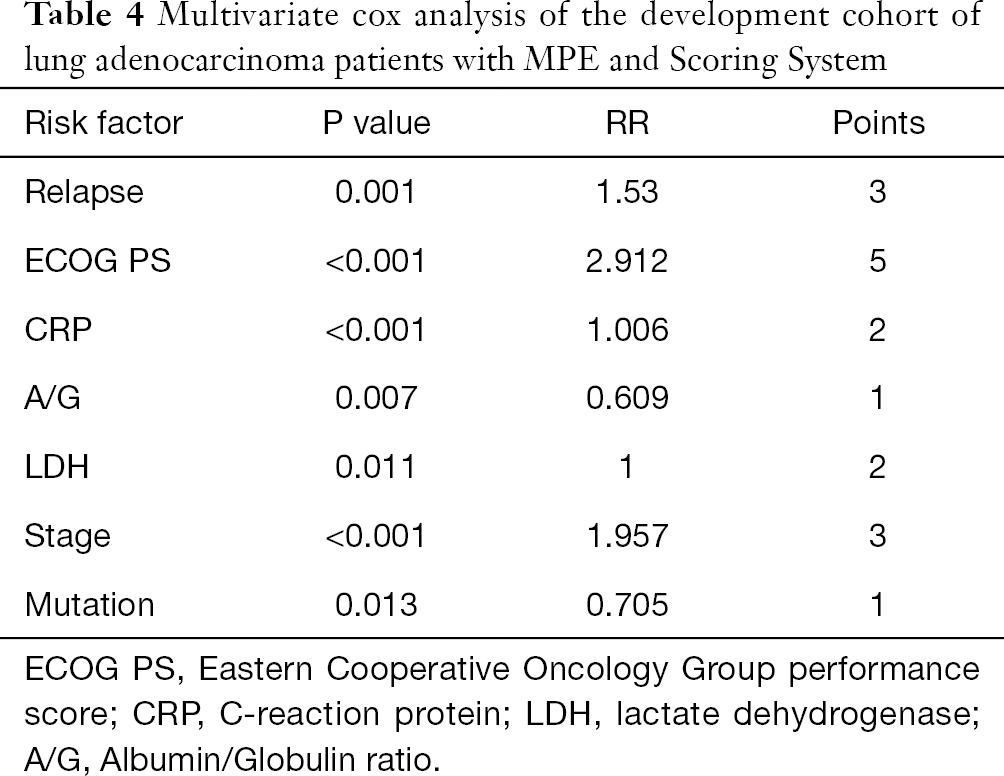 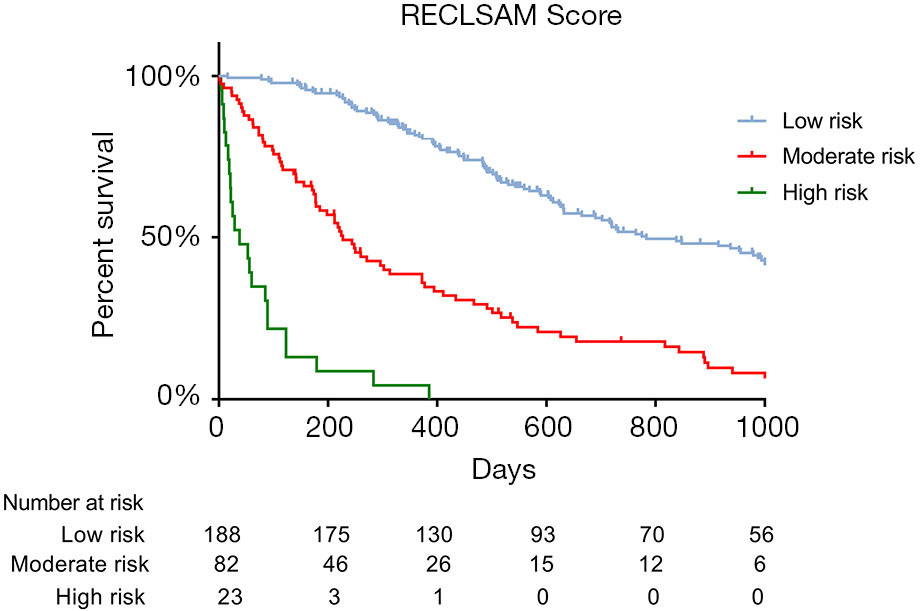 Also, the LENT score was performed in the development cohort with only 2 curves, which might not distinguish the low-risk population from lung cancer patients. The PROMISE model also had limitations in discriminating the 4 groups completely. Both the LENT and PROMISE prognostic models applied to unselected cancer patients, which might decline the accuracy of predicting a particular tumor type. Hence, our study included the development of new prognostic models, including 5 and 7 variables.

The first appearance of MPE usually indicated a new diagnosis or recurrence of lung cancer. We found relapse was a strong predictive variable for poor survival as it signaled that the disease had continued to progress after receiving prior treatment. These relapse patients needed a second line treatment to control the progression. This was consistent with chemotherapy and radiotherapy's risk factors as reported by the PROMISE model (7). Multivariable analysis confirmed that high ECOG PS was an independent risk factor of survival. Previous studies have also reported that PS was associated with MPE prognosis derived from several types of carcinoma (16-18). Poor PS indicated limited therapeutic effects and short OS. The common biomarker of the systemic inflammatory response, CRP, was a prognostic factor in our study. Kasapoglu et al. also confirmed that high serum CRP was associated with poor survival among NSCLC patients (9). Inflammation was reported to be a hallmark feature of tumor development, which played a role in cancer immune response (19,20). Heikkilä outlined possible mechanisms of inflammation and cancer: tissue inflammation occurred as the tumor grew, and serum CRP increased; CRP was a product of the immune response toward tumor antigens (21). As an inflammatory marker, NLR has also been considered related to lung cancer patients with MPE (22). However, there was no statistically significant difference between the high NLR and low NLR groups in our research using multivariable Cox analysis. Like the LENT score, the RECLS score also found that LDH in pleural fluid was responsible for lung cancer patients' survival. A retrospective study, including 74 lung adenocarcinoma patients with MPE, reported that subjects with higher pleural LDH (>1,500 IU/L) had shorter survival than relatively lower pleural LDH (≤1,500 IU/L) (10). Elevated pleural LDH may be associated with glycolysis over oxidative phosphorylation for energy by cancer cells (23). The TNM stage was also shown to have the ability to predict the prognosis of lung cancer participants in the present study. According to the 8th edition, the main point of discrimination between stage IVA and stage IVB was multiple distant metastases. Participants were classified into stage IVB when there was a minimum of 2 distant metastatic foci. Previous research has also indicated that distant metastasis was an independent risk factor for the survival of NSCLC patients with MPE (9); however, the number of metastatic foci was not explained in detail. Unexpectedly, the pathological pattern was not an independent variable related to the survival rate. To our knowledge, small cell lung cancer (SCLC) is aggressive cancer with shorter survival than NSCLC (24). The insignificant difference may have been due to the small proportion of SCLC among lung cancer participants.

We then developed a predictive model for the sub-group of lung adenocarcinoma participants. In addition to the 5 variables of the RECLS model, albumin to globulin ratio (A/G) and mutation were also clinical biomarkers. Serum A/G was previously reported to affect the prognosis of NSCLC patients (25,26). Targeted therapy has led to a new era for lung adenocarcinoma, and gene mutation detection is recommended in the National Comprehensive Cancer Network (NCCN) guidelines (27). Abisheganaden et al. have confirmed that the epidermal growth factor receptor (EGFR) mutation was a protective factor for lung adenocarcinoma patients (28).

We used ROC curves to assess the sensitivity and specificity of the RECLS and RECLSAM scores. The 2 prognostic models were valuable and efficient in predicting lung cancer and lung adenocarcinoma patients’ survival. It was essential to enable discrimination of the different risks of lung cancer patients with MPE to facilitate optimal management strategy selection by doctors and. Those belonging to high-risk groups might receive conservative, symptomatic treatment, while low-risk patients can opt for more aggressive management.

The strengths of this research include the large sample size and clinical practicality of noninvasive risk factor assessment. We developed predictive models of survival in the selected populations of lung cancer and lung adenocarcinoma with MPE.

Our research had several limitations. Firstly, this was a retrospective double-centered study spanning from 2008 to 2018. Only a few patients were still alive by the follow-up time. Secondly, we could not control the treatment options since therapy usually changed according to the severity of diseases and their adverse effects. Also, we used dichotomized variables, which may have decreased the accuracy of continuous variables.

Reporting Checklist: The authors have completed the TRIPOD reporting checklist. Available at http://dx.doi.org/10.21037/tlcr-20-1191

Conflicts of Interest: All authors have completed the ICMJE uniform disclosure form (available at http://dx.doi.org/10.21037/tlcr-20-1191). YS serves as an editor-in-chief of Translational Lung Cancer Research from Sep 2020 to Aug 2022. TL serves as an unpaid associate editor-in-chief of Translational Lung Cancer Research. The other authors have no conflicts of interest to declare.

Ethical Statement: The authors are accountable for all aspects of the work in ensuring that questions related to the accuracy or integrity of any part of the work are appropriately investigated and resolved. The study was conducted in accordance with the Declaration of Helsinki (as revised in 2013) and approved by the local ethics committee of Jinling Hospital (registration ID. DBNJ329). Informed consent from individuals was waived based on the retrospective nature of this study.