“Hallmarks” of cancer has not only advanced our understanding of cancer biology but also provided a basis for biomarker development (1). Resistance to cell death, in particular, constitutes a crucial axis of the cancer hallmarks and indeed cancers develop diverse means to avoid “programmed” cell death (2). Acquisition of the ability of cancer cells to evade a form of the programmed cell death, apoptosis, which proceeds with a cascade of caspase activation, is well known as such a resistance to cancer cell death. Recent studies, however, have unveiled a qualitatively distinct, caspase-independent form of programmed cell death termed necroptosis, which would go awry in many cancers (3).

Genetic and biochemical studies have uncovered basic mechanisms by which necroptosis is regulated. We now know that necroptosis critically requires the formation of a microfilament-like protein complex called the necrosome. Phosphorylation in cis and trans between Receptor-Interacting Protein Kinases 1 and 3 (RIPK1 and RIPK3) is known to cause the necrosome to assemble. The necrosome in turn activates the pro-necroptotic kinase Mixed Lineage Kinase domain-Like protein (MLKL), leading to cell death with plasma membrane rupture, similarly to that of an unprogrammed mode of cell death called necrosis. The E3 ubiquitin ligase Pellino-1 (PELI1), on the other hand, dampens the necrosome activity by ubiquitinylating RIPK3 for proteasomal degradation (4,5). This suggests that an adequate level of key necrosome components crucially decide whether for the cell to engage the proper necroptotic cell death response.

While our basic mechanistic understanding of necroptosis has rapidly advanced, how it is related to survival of cancer patients remains less explored. Studies using preclinical models of select cancers such as leukemia and pancreatic cancer have elucidated the translational relevance of necroptosis (4,6,7). Notably, several cultured cell and preclinical models suggested an association of necroptosis with the DNA damage response (DDR), which is orchestrated by the “guardian of the genome” p53 (1,2,8,9). While radiation therapy and chemotherapy are presumed to mount the DDR, cancers can often develop a wide array of resistance to the DDR. The suggested association between necroptosis and the DDR thus necessitates further examination in cancer patients (10-13).

Importantly, necroptotic factors appear to influence tumor progression differentially depending on individual tumor types (4,6,7). We focus our investigation on lung cancer, which is relatively less represented in preclinical necroptosis studies. Lung cancer is the leading cause of cancer-related deaths globally, constituting almost 25% of all cancer deaths (14). A major type of lung cancer, non-small-cell lung cancer (NSCLC) has a particularly grave prognosis albeit a slowly improving survival trend in recent years. Thus, development of prognostic biomarkers for the early-stage NSCLC is of interest in this field because the 5-year survival rate is only around 70% (15). In this vein, some factors such as those involved in DDR pathways have been explored in NSCLC patients as candidate prognostic markers (8,9). These factors, however, have not been clinically validated while biologically plausible. Importantly, the current adjuvant treatment does not seem to confer a survival advantage and treatment decisions are not guided by biomarkers (9). Squamous cell carcinoma (SCC) constitutes an aggressive subtype of NSCLC, distinguishing itself from non-SCCs not only by distinct histology and genomic landscapes but by unique clinical characteristics of age, smoking habit, and comorbid diseases (16,17). Given the significant differences between these subtypes, biomarkers specific to SCC are greatly needed.

To this end, we here investigated whether expression of necroptosis factors in combination with that of DDR factors has any association with survival of the patients with the stage I NSCLC. We present data about the relationship among expression levels of those proteins, NSCLC subtypes, and patient survival as follows and in accordance with the REMARK reporting checklist (available at http://dx.doi.org/10.21037/tlcr-20-1027).

Patients with pathological stage I NSCLC (pT1-2N0M0) who had been consecutively treated at the Inha University Hospital (Incheon, South Korea) were retrospectively included in the study (Figure S1). The patients who underwent surgical tumor resection between 1 January 1997 and 31 December 2011 were initially considered for inclusion. Cancers were staged according to the 7th edition Tumor-Node-Metastasis staging system (18). Data from each patient who had been followed up for at least 3 years after surgical resection and whose tumor had been completely resected (R0 resection) were included in the analysis. The patients were scheduled for follow-up every 3 months for 2 years and every 6 months thereafter. Data from the patients who had undergone limited resection (segmentectomy or wedge resection), received any anticancer treatment before surgical resection, or had a history of other cancers were excluded, resulting in the final sample size of 394 patients. All formalin-fixed, paraffin-embedded (FFPE) blocks were sent to a laboratory (SuperBioChips, Seoul, South Korea) for tissue microarray (TMA) construction and immunohistochemical staining. The study protocol was approved by the Institutional Review Board of the Inha University Hospital with waiving the informed consent requirement.

Construction of tissue microarrays and immunohistochemistry

TMA construction by using individual FFPE samples was performed as previously described (8). Each tissue array block contained up to 50 specimens, which allowed a total of 394 specimens to be mounted on 20 blocks. Serial sections (4 µm) of the FFPE blocks were analyzed for protein expression with immunohistochemistry. A pathologist performed a test procedure by using a control human TMA panel (19) according to the manufacturer’s information and evaluated the quality of positive and negative controls in immunohistochemistry. Antibodies against RIPK3, MLKL, and PELI1 (F-7) were used due to their essential roles in the necrosome formation and modulation (3). In addition, antibodies against P53, γH2AX, ATM, Chk2pT68, BRCA1pS1423, and ERCC1 were used due to their well-defined roles in cellular responses to DNA damage (1,8,9). Information for the antibodies used in this study is summarized in Table S2. All immunohistochemical staining was performed with a BenchMark XT autostainer (Ventana Medical Systems, Tucson, AZ) and the i-View detection kit (Ventana Medical System) by following the standard operating procedure at SuperBioChips Laboratory, Seoul, South Korea.

TMA samples containing more than 500 malignant cells were considered for evaluation. Scanned images of the stained slides were viewed using the Aperio ImageScope program (version 11.2.0.782; Aperio Technologies, Vista, CA, USA) at the 20× objective magnification. Automated digital image analysis was performed using the Genie Classifier and Nuclear v9 algorithm (Aperio Technologies). The percentage of stained cells and the intensity of staining were estimated in the cytoplasm for MLKL and PELI1 and in the nucleus for RIPK3, p53, γH2AX, ATM, Chk2, BRCA1, and ERCC1 by two pathologists (HJJ and LK). The evaluators were blinded to each patient’s results for the clinical and pathological variables and the survival status.

Protein expression was evaluated by using an H-score method. The percentage of tumor cells with positive cytoplasmic or nuclear staining on each TMA core was assigned a score of either 0 (0% stained tumor cells), 0.1 (1–9%), 0.5 (10–49%), or 1 (≥50%). The staining intensity was assigned a score of either 0 (weakest intensity), 1, 2, or 3 (strongest intensity). Each H-score was obtained by multiplying the proportion by the staining intensity. The median values of all mean H-scores were used as the cut-off values for the classification of expression of the nine proteins as either “low” or “high” (Figure S2).

The overall survival as the endpoint of this study was calculated from the time of diagnosis to the time of the last follow-up or death due to any cause. Dates of death were obtained principally from review of the medical records. To increase the quality of the information regarding the survival status of patients lost to follow-up, missing information was either obtained by contacting the patients or their relatives by phone or mail (13 patients) or obtained from the Ministry of Public Administration and Security, South Korea (29 patients).

Distributions of the clinical variables and levels of protein expression between SCC and non-SCC groups were tested using either chi-square test or Mann-Whitney U test as appropriate as possible. Cox model was performed to estimate HR and its 95% CI for each clinical variable and protein. Proteins that were significant at 5% level in the univariate Cox model were included in the multivariate Cox model. Performance of the model was evaluated using Harrell’s c-index. Statistical significance was accepted when P<0.05. To evaluate significance of each protein, P values were corrected using False Discovery Rate (FDR) for multiple comparisons (20). Proteins with FDR-corrected P value (q value) <0.05 were considered significant. Statistical analyses were performed using a statistical software package (SPSS version 19.0, SPSS, Chicago, IL).

Clinical characteristics of 394 patients with the stage I NSCLC (197 with SCC, 175 with adenocarcinoma, and 22 with other histology) are presented in Table 1. The median age of the patients was 66 years. 160 patients (40.6%) have since died. The median survival time was 9.8 years. Each patient was classified into either the SCC or the non-SCC group. The proportions of never smokers and women were greater in the non-SCC group (82% and 81% of the entire cohort, respectively, chi-square P<0.001) than in the SCC group. The non-SCC group also had greater proportions of patients who were younger, had smaller tumors, had lower T stages, and/or received lobectomy. Associations between survival, age, size of tumor, and T stage were statistically significant (Table S2). The Gender and Charlson comorbidity index score (CCIS), smoking habit, histology results, lymphatic or blood vessel invasion, type of surgery, and use of adjuvant chemotherapy were not statistically significant prognostic factors, however. 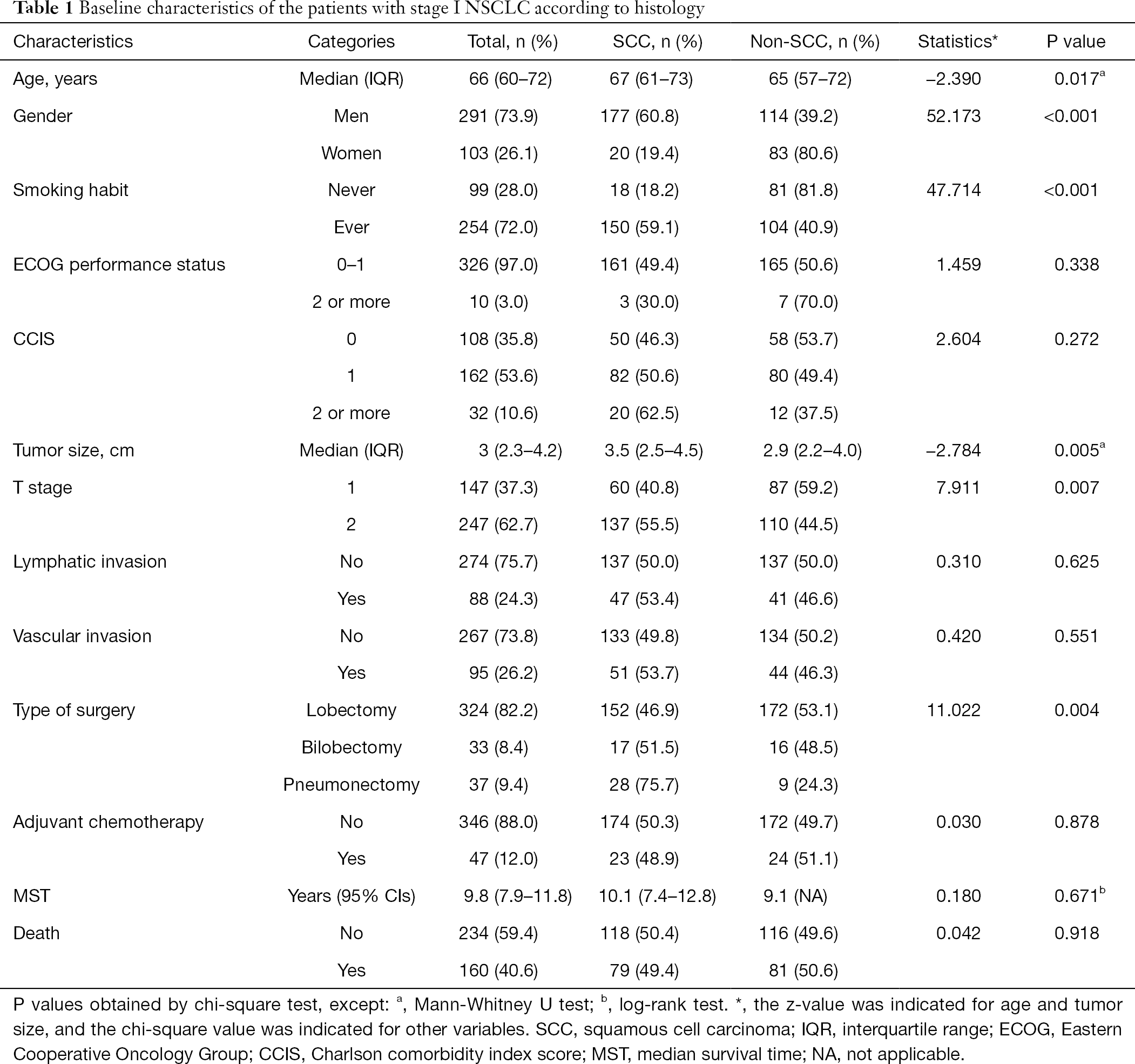 Expression of proteins involved in necroptosis or the DDR 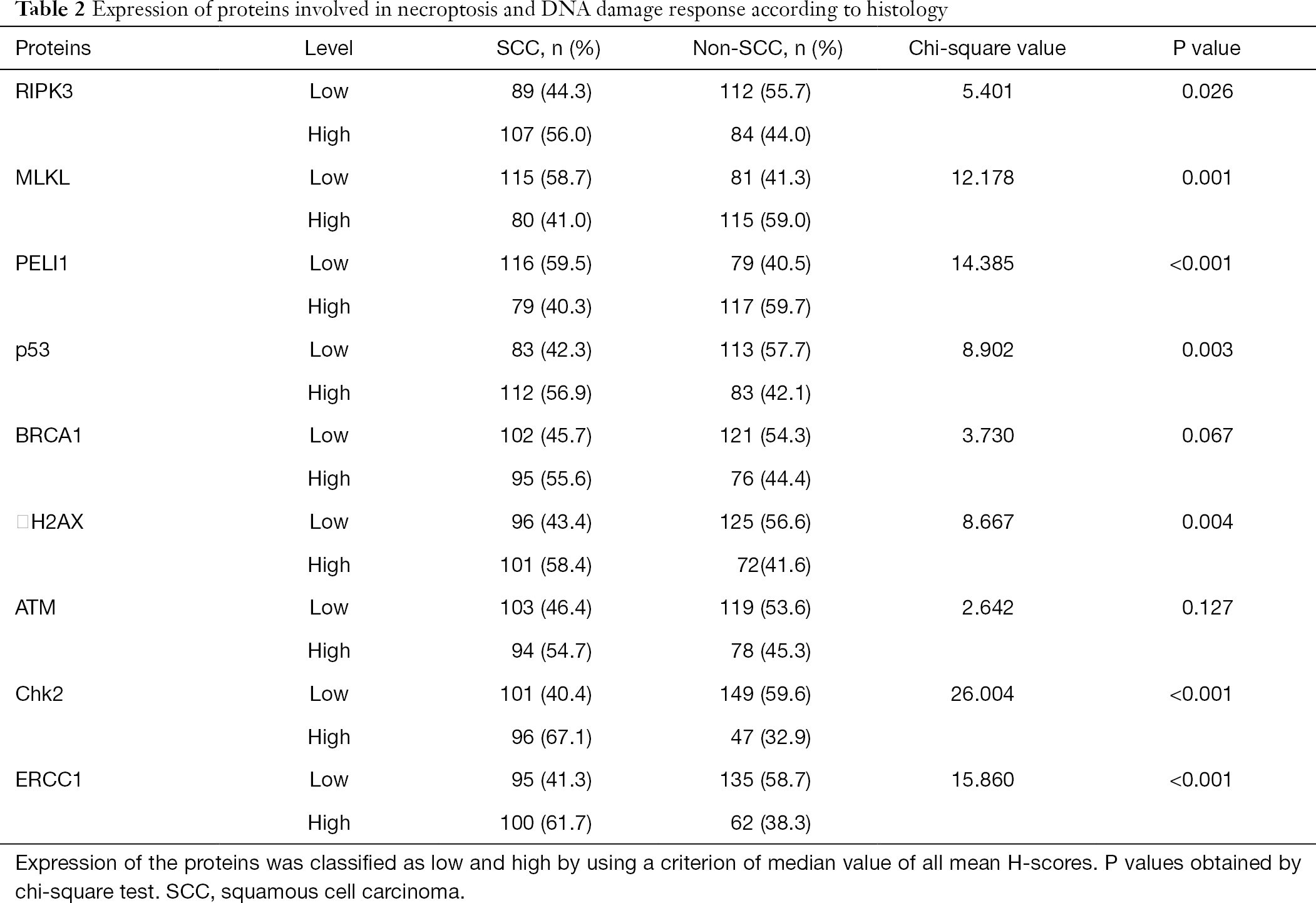 Association of necroptosis and DDR proteins with patient survival 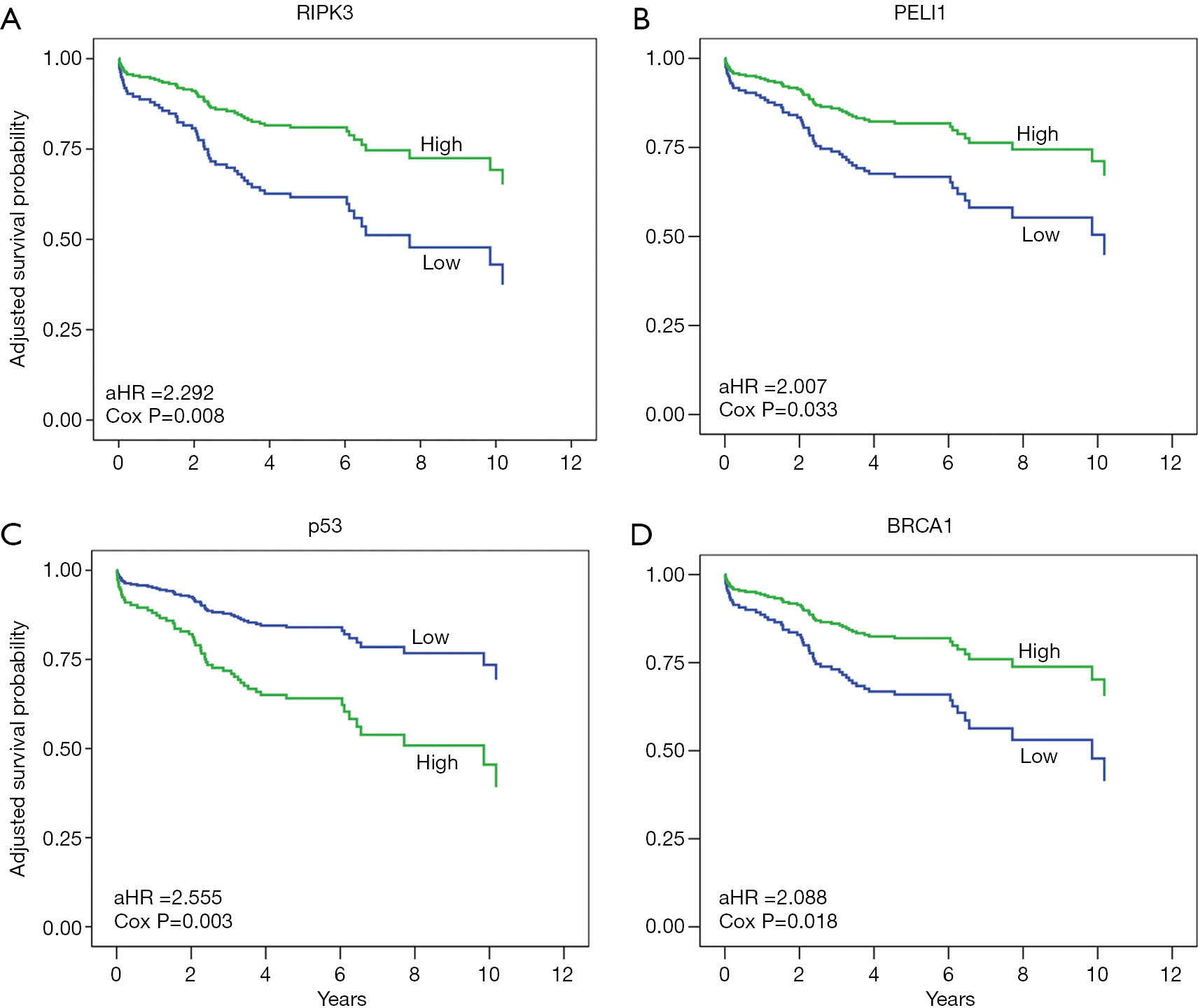 The study was conducted in accordance with the Declaration of Helsinki (as revised in 2013). This study was approved by the Institutional Review Board of the Inha University Hospital (2016-12-011) and the informed consent requirement was waived.

Our findings should be interpreted with caution. Of note, we here adopted a retrospective study design. Therefore, we did not evaluate recurrence free survival as alternative endpoint because of the lack of stringent strategy for follow-up. The results were not validated using an independent cohort. However, we think the sample size was large enough to evaluate the effects of protein expression. Also, our present study was designed to maintain the homogeneity of the study population. We used stringent criteria for both inclusion and exclusion of patients’ data to minimize selection biases. Information on clinical or pathological variables as potential confounders was comprehensively collected and extensively considered during the analysis. We did not provide a biological basis that might directly supports the differential prognostic effects between the two histological groups. However, our findings may be supported by previous mechanistic studies with cancer cell lines or animal models (4-7,10-13,22,23) as well as the differences in genomic architectures and clinical profiles between these groups (16,17). All in all, our findings demonstrate a clear translational relevance of the decreased expression levels of select necroptosis factors in predicting a poor prognosis of the SCC-subtype NSCLC.

This is the first study to demonstrate prognostic implications of necroptosis proteins and their association with expression of DDR proteins in patients with stage I NSCLC. Our results indicate that RIPK3 and PELI1 or their individual interaction with p53 can help classify patients with SCC into groups of either low or high death risk, providing a novel insight for clinicians into which patients would require thorough follow-ups.

We thank SuperBioChips (Seoul, South Korea) for the service of tissue microarray (TMA) construction and immunohistochemical staining of FFPE blocks.

Reporting Checklist: The authors have completed the REMARK reporting checklist. Available at http://dx.doi.org/10.21037/tlcr-20-1027

Conflicts of Interest: All authors have completed the ICMJE uniform disclosure form (available at http://dx.doi.org/10.21037/tlcr-20-1027). The authors have no conflicts of interest to declare.

Ethical Statement: The authors are accountable for all aspects of the work in ensuring that questions related to the accuracy or integrity of any part of the work are appropriately investigated and resolved. The study was conducted in accordance with the Declaration of Helsinki (as revised in 2013). This study was approved by the Institutional Review Board of the Inha University Hospital (2016-12-011) and the informed consent requirement was waived.