Genomic analyses have resulted in a better understanding of the biology of non-small cell lung cancer (NSCLC) and in the successful development of molecularly targeted therapy (1,2).

Somatic BRAF mutations occur in 2% to 4% of all NSCLC (3,4), with approximately half of them showing a typical V600E mutation, associated with upregulation of MAPK signaling pathway (5). Even though monotherapy with BRAF-V600-specific inhibitors such as vemurafenib and dabrafenib shows clinical activity (6,7), combination treatment with BRAF- and MEK-inhibitors results in even higher response and progression-free survival rates and has thus been licensed by FDA and EMA (7,8).

In Melanoma, resistance to BRAF-inhibitor treatment is frequently caused by off-target mechanisms such as reactivation of MAPK signaling (9-11), PI3K-AKT pathway dysregulation and loss of CDKN2A (12,13). On-target resistance mechanisms are less common in this setting with only a few publications describing BRAF amplifications (14)and alternative BRAF splicing variants (15) as potential mechanisms. Combinations of the described alterations may occur in melanoma patients treated with combined BRAF/MEK inhibition (16).

In this case report, we describe the progressive disease of a patient with BRAF-V600E mutant metastatic adenocarcinoma of the left lung under combination therapy of dabrafenib and trametinib. We illustrate, that even in an apparently typical clinical course, a careful re-assessment of treatment options including renewed molecular diagnostic may be essential to optimize treatment outcome.

We present the following article in accordance with the CARE reporting checklist. Available at http://dx.doi.org/10.21037/tlcr-20-996.

In September 2017, a 75-year-old male patient with a 55-year history of smoking presented with bone pain and increasing dyspnea. The initial computed tomography (CT) of thorax and abdomen showed a 33×33 mm central mass in the left lower lobe of the lung (Figure 1) with multiple lymph node and bone metastases, which were histologically proven to represent a TTF1-positive pulmonary adenocarcinoma (Figure 2). Next-generation sequencing (NGS) revealed the presence of a BRAF-V600E mutation and no other targetable driver mutations. 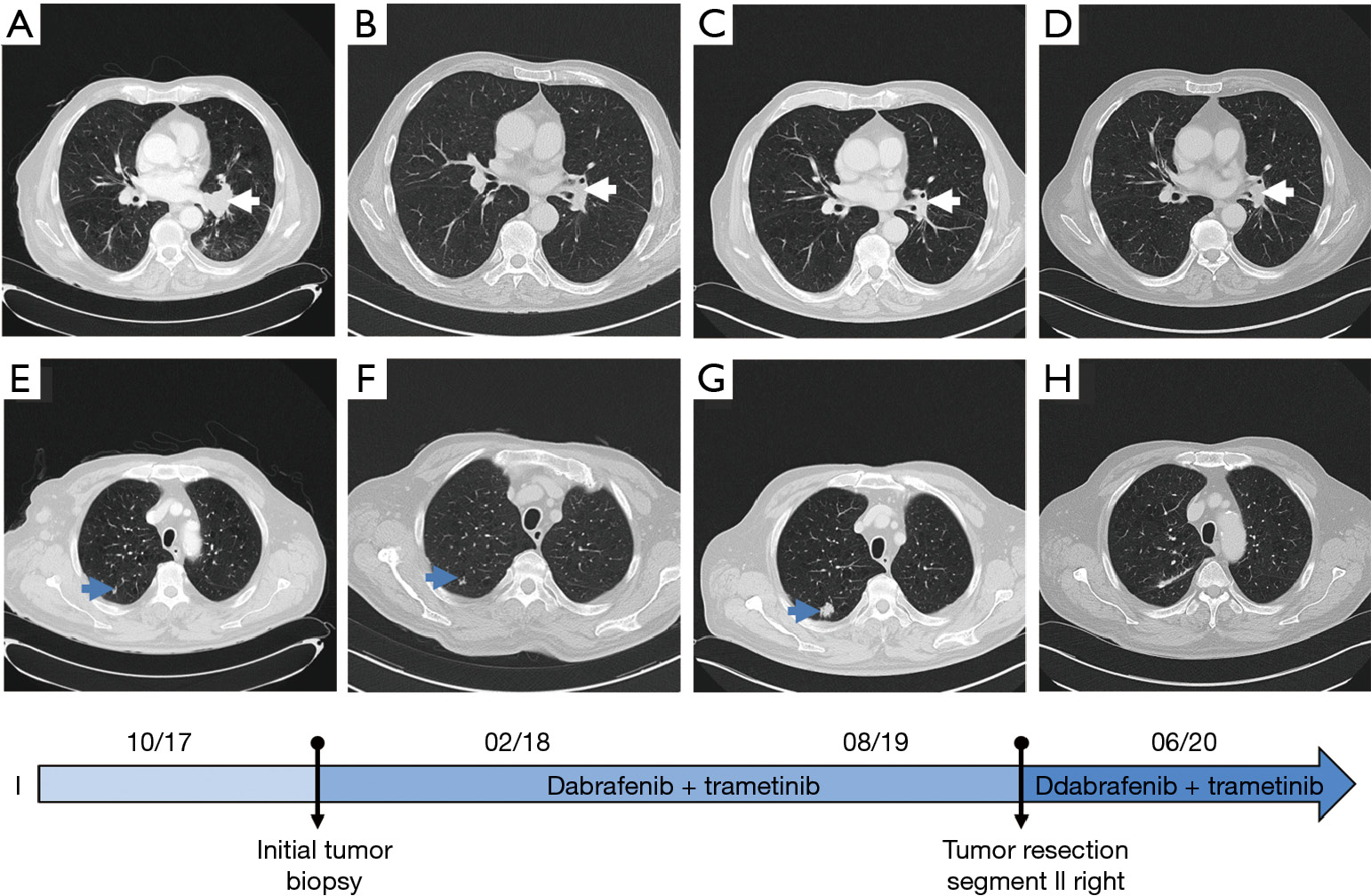 Figure 1 Clinical course of disease. Axial contrast-enhanced CT-scans of the primary tumor of the left lung (white arrow, top panel A,B,C,D) and the tumor mass in segment II of the right lung (blue arrow, bottom panel E,F,G,H) at different points in the follow-up and in correlation to patient’s course of therapy (I). 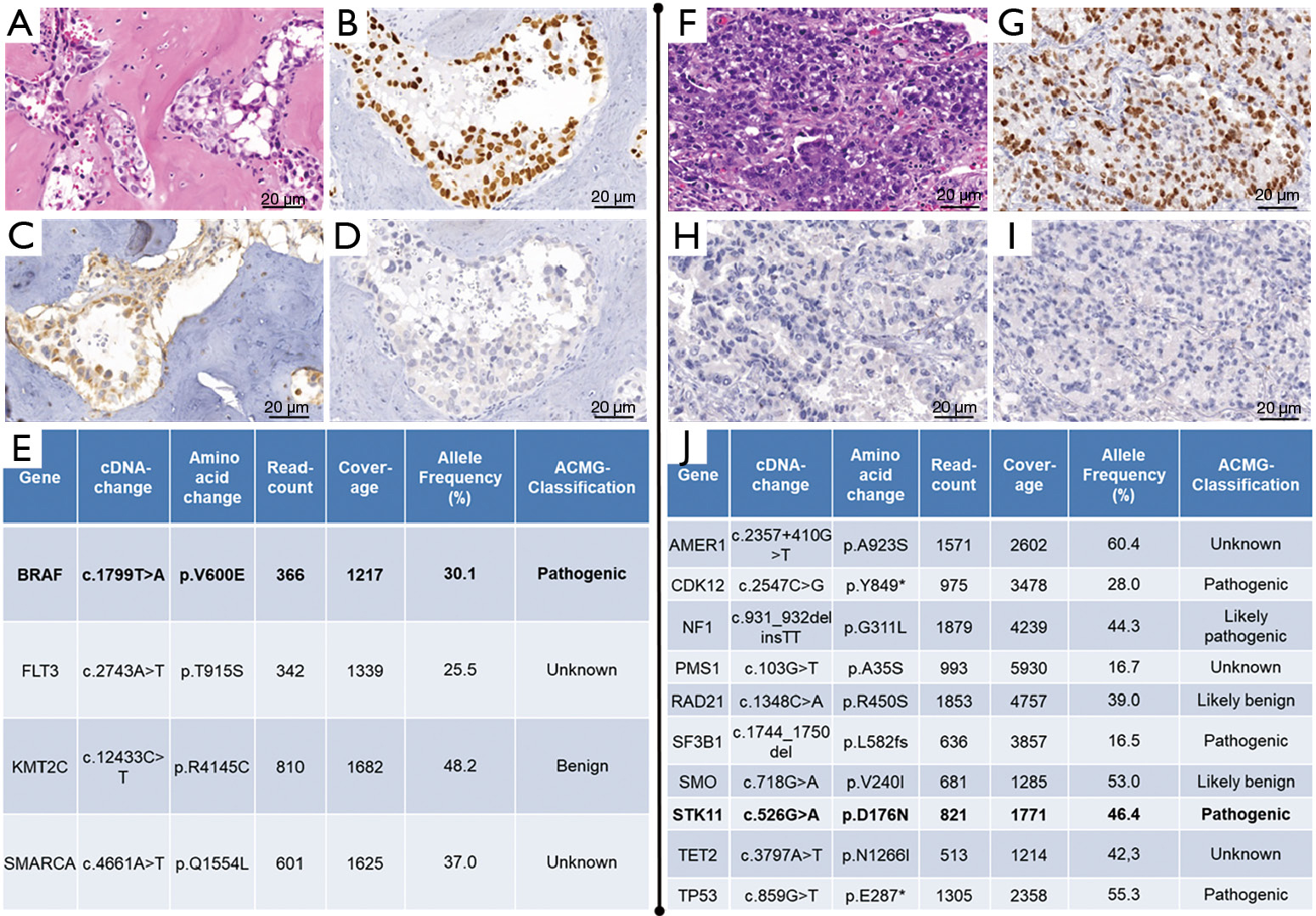 Expression of PD-L1 was restricted to less than 1 percent of the tumor cells.

Thus, a combination of dabrafenib (150 mg twice daily orally) and trametinib (2 mg/day orally) was started and resulted in partial response (PR) in subsequent CT examinations (decrease of the index lesion to 24×18 mm in Figure 1B). However, a single lesion in segment II of the contralateral lung, which was hardly visible in the initial CT-scan, progressed in size (to 20×15 mm in Figure 1G) after 18 months of treatment. At that point, we considered switching to immunochemotherapy. However, as the lesion in segment II (right) was the only progressive tumor manifestation and the patient was reluctant to start a chemotherapy containing regimen resection of this single lesion was offered. Histology demonstrated TTF1-positive adenocarcinoma (Figure 2F,G,H,I) compatible with the primary tumor. In an attempt to elucidate potential resistance mechanisms, we performed NGS-based panel sequencing. Much to our surprise, we were unable to find the initial BRAF-V600E mutation. Therefore, we performed additional sequencing on both tumor samples with identical commercially available, larger amplicon based NGS panels (Human Comprehensive Cancer Panel and Human Oncology Panel, Qiagen) for comprehensive molecular characterization and comparison of both specimen.

The regions of interest were amplified using the above mentioned amplicon panels according to the protocol “QIAseq Targeted DNA V3 Panel, May 2017” (Qiagen). Tumor cell content of both samples was at least 70%. The bioinformatics evaluation was performed with Biomedical Workbench from CLC (12.0.3) using a customized analysis algorithm with the following filters: coverage >/=200, allele frequency >/=10%. HG19 was used as reference genome.

The initial left-sided tumor (Figure 2E) and the resected right-sided lesion (Figure 2J) showed completely distinct molecular profiles with not a single shared variant, arguing for the latter being a second independent BRAF-wildtype NSCLC rather than a metastasis of the initial BRAF-mutated cancer.

Given the complete resection of the second primary BRAF-wildtype NSCLC, the well-tolerated and effective TKI combination therapy was continued. The patient remained in stable PR at last follow-up, 34 months after treatment initiation and 12 months after resection of the single progressing lesion in segment II right (index lesion 26×16 mm; Figure 1D).

All procedures performed in this study were in accordance with the ethical standards of the institutional and national research committee and with the Helsinki Declaration (as revised in 2013). Written informed consent was obtained from the patient.

Almost 60% of all patients with NSCLC harbor an oncogenic driver mutation with nearly half of them being therapeutically targetable (1). Targeted therapies have, in comparison to conventional chemotherapy, resulted in impressive improvements in response rates, survival and patient-reported quality of life (22). However, the treatment of advanced NSCLC with typical driver mutations remains a challenge due to the invariable development of on- and off-target resistance (23).

While molecular re-assessment guided selection of targeted second-line treatment has been established for more frequent molecular subtypes of NSCLC (24,25), BRAF-mutated patients progressing on BRAF/MEK-inhibition are usually switched to immuno(chemo)therapy (20). This seems reasonable as response rates to immuno(chemo)therapy in BRAF-mutated patients are comparable to the non-mutated situation (26-28). However, an increase in the frequency of re-biopsies with renewed molecular diagnostic will be necessary to elucidate and potentially target resistance mechanism in this rare mutation subtype. Our case illustrates that this is of special importance in patients with “oligo-progression”, which may represent local clonal evolution (29,30) but also the emergence of a second primary malignancy. Even though the genetic information obtained for both tumors is limited by the size of the applied NGS-panels, we believe that the grade of molecular disparity clearly argues against clonal evolution in our case. The STK11 mutation identified in the second BRAF-wildtype NSCLC of our patient has been associated with decreased activity of immune checkpoint-inhibitor based treatment. Therefore following the current clinical standard by switching to this treatment modality might not have had the desired effect in this individual (31).

Keeping in mind the limitations of a single case report, we think that the course of our patient illustrates, that molecular re-assessment of tumor material obtained at time of progression might have a tremendous impact on an individual patient’s outcome and should therefore be considered on a routine basis.

Funding: This work was supported by the Stiftung Deutsche Krebshilfe within the National Network Genomic Medicine Lung Cancer, nNGM.

Reporting Checklist: The authors have completed the CARE reporting checklist. Available at http://dx.doi.org/10.21037/tlcr-20-996

Ethical Statement: The authors are accountable for all aspects of the work. The authors ensure that questions related to the accuracy or integrity of any part of the work were appropriately investigated and resolved. All procedures performed in this study involving human participants were in accordance with the ethical standards of the institutional and national research committee and with the Helsinki Declaration (as revised in 2013). Written informed consent was obtained from the patient.