Lobectomy has been regarded as the standard procedure for surgical treatment of stage IA non-small cell lung cancer (NSCLC) since a randomized study comparing lobectomy and sublobar resections was published in 1995 (1). The Lung Cancer Study Group (LCSG) trial demonstrated that local recurrence rate was 3-fold higher in the limited resection group compared to that in the lobectomy group. However, with the use of computed tomography (CT) scan for screening, an increased proportion of early-stage lung cancers, especially ground glass opacity (GGO)-containing nodules, are detected nowadays. And recent retrospective studies reported that sublobar resections might have similar efficacy as lobectomy on prognosis in such GGO-containing early-stage NSCLC patients and might help preserve more pulmonary function (2-6). Therefore, the conclusion from the LCSG trial needs to be reexamined given the paradigm shift of surgical candidates. The current National Comprehensive Cancer Network (NCCN) guideline for NSCLC also suggests that in addition to being a palliative procedure for patients who cannot tolerate lobectomy, sublobar resections may also be considered as an intentional treatment in selected patients with a peripheral nodule ≤2 cm in size and one of the following criteria: pure adenocarcinoma in situ histology, radiologic surveillance confirming a long doubling time (≥400 days), or ≥50% ground-glass appearance on CT scan (7).

We thus aimed to study whether total lesion size or solid component size should be applied in the selection of sublobar resections for early-stage GGO-containing lung adenocarcinomas. We present the following article in accordance with the STROBE reporting checklist (available at http://dx.doi.org/10.21037/tlcr-21-132).

From a prospectively kept database, 2,093 consecutive patients who underwent surgery with a curative intention for clinical stage IA lung adenocarcinomas appearing as small (≤3 cm), peripheral, GGO-containing nodules at Shanghai Chest Hospital between January 2013 and July 2015 were retrieved for the study. The inclusion criterion was a pathologic diagnosis of lung adenocarcinomas appearing as small GGO-containing nodules (≤3 cm) on thin-slice CT scan. The exclusion criteria were patients having CT scan at other hospitals, an interval of over 1 month between CT examination and surgery, and nodules too irregular to measure precisely. A peripheral nodule was defined as the center of the nodule within the outer third of the lung field. According to the radiological appearance of the nodules on CT scan, patients were divided into a pure GGO group and a PSN group. The PSN group was further divided into a GGO-predominant subgroup and a solid-predominant subgroup according to their CTR less or greater than 0.5. The study was conducted in accordance with the Declaration of Helsinki (as revised in 2013). This study was approved by the institutional review board of the Shanghai Chest Hospital [No. KS(Y)1668] and informed consent was waived due to the retrospective nature of the study.

CT scans were performed from the apex to the base of the lung at suspended maximum inspiration using a 64-detector CT row scanner (Brilliance 64; Philips, Eindhoven, The Netherlands). Soft tissue and lung algorithms with a thickness of 1 mm were used to reconstruct the images. Consolidation was defined as a homogeneous increase in pulmonary parenchymal attenuation that obscures the margins of airway walls and vessels, while GGO was defined as hazy increased opacity of lung, with preservation of bronchial and vascular margins (13). All measurements were conducted with a lung window setting (lung window center, −520 HU/lung window width, 1,450 HU). The longest diameters of the total lesion and the consolidation part were measured on the planes displaying the largest lesion and the largest portion of solid component, respectively. Histological types of the tumors were classified according to the International Association for the Study of Lung Cancer (IASLC) /American Thoracic Society (ATS)/European Respiratory Society (ERS) classification of lung adenocarcinomas as adenocarcinoma in situ, minimally invasive adenocarcinoma and invasive adenocarcinoma (14).

All patients received video-assisted thoracoscopic surgery. Lobectomy, segmentectomy and wedge resection were selected according to the surgeons’ decision with an intention-to-treat. Sublobar resections were considered when a parenchymal resection margins ≥2 cm or ≥ the size of the nodule could be obtained. Patients received either systematic mediastinal lymph node sampling or systematic lymph node dissection, according to the surgeons’ decision. Systematic nodal sampling was carried out according to the ESTS guideline for intraoperative lymph node staging (15). And systematic dissection aimed to remove all mediastinal tissue together with the lymph nodes within anatomical landmarks (16). Patients were followed every 6 months for the first 2 years after surgery and then once a year from the third to the fifth year. Physical examination, chest CT scan, ultrasonography of abdominal, cervical and supraclavicular regions and serum tumor markers were checked routinely. Magnetic resonance imaging of brain, bone scans and PET-CT were reserved only if recurrence or metastasis was suspected.

Statistical analyses were performed using the SPSS Statistics 23.0 software (SPSS Inc., Chicago, IL, USA) and R software (version 3.6.3, http://www.r-project.org). Continuous variables were compared with the Student t-test or Wilcoxon rank-sum test, depending on whether the variables were normally distributed. Categorical variables were analyzed with the Chi-square test or the Fisher exact test when appropriate. Relapse-free survival (RFS) was defined as the time between the day of surgery and the day of first recurrence or last follow-up. Overall survival (OS) was defined as the time between the day of surgery and the day of death or last follow-up. Deaths from other causes were considered as censored. RFS and OS were calculated with Kaplan-Meier curves and compared by log-rank test. In order to investigate the prognostic value of total lesion size and solid component size while reducing the effects of confounding biases, we compared the prognosis and histological characteristics between the GGO-predominant subgroup and the solid-predominant subgroup by means of two propensity-score matched analyses. We first compared patients with nodules of similar total lesion size but different solid component size, and then compared those of similar solid component size but different total lesion size. Other clinicopathological characteristics including sex, age, smoking history, American Society of Anesthesiologists (ASA) score, body mass index (BMI), forced expiratory volume in 1 second (FEV1) and resection extents were incorporated into propensity-score matching (PSM) to eliminate potential confounding factors. A ratio of 1:1 match with a caliper size of 0.04 was applied for PSM, using the nearest-neighbor matching algorithm without replacement. Potential risk factors for prognosis were analyzed by Cox proportional hazards regression model. All tests were two tailed with a statistical significance of 0.05. 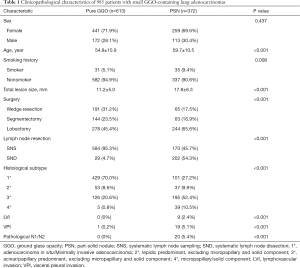 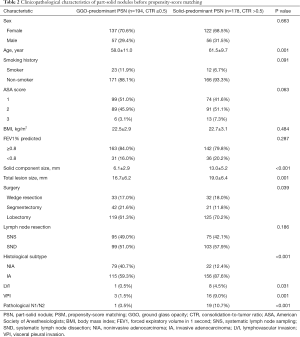 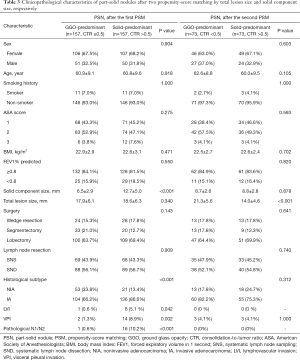 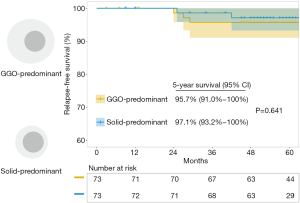 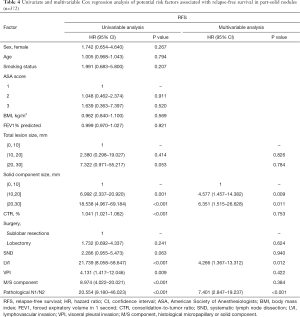 Recent studies on resection extent for early-stage lung cancers have been focused on lesions with a total size less than 2 cm. The LCSG trial (1) reported a 50% increase of cancer related death rate and a 75% increase of recurrence rate associated with sublobar resections. However, tumors >2 cm were also included in that trial. With the wide-spread application of CT scan, tumors of smaller size were increasingly detected. And the current UICC/IASLC staging system has further broken down the T1 stage into 3 categories by 1 cm increment. Several retrospective studies have already observed similar oncological outcomes between lobectomy and sublobar resections in patients with small early-stage NSCLC (2,6,17,18). Zhao et al. compared segmentectomy and lobectomy among patients with pathological stage IA adenocarcinomas ≤20 mm and demonstrated that segmentectomy was not associated with worse lung cancer-specific survival after PSM (5-year survival =83.89% for segmentectomy vs. 86.11% for lobectomy) (18). Another prospective nonrandomized multicenter study reported that sublobar resection group had a similar oncological outcome with lobar resection group in peripheral cT1N0M0 NSCLC of 2 cm or less in size (2). The 5-year DFS was 85.9% for sublobar resection group and 83.4% for lobar resection group (P=0.2778). These results led to the change that sublobar resections may now be considered as an intentional treatment for tumors with a total lesion size of 20 mm or less in the clinical guideline for NSCLC (7). In the current study, we found that for tumors with similar solid component size ≤20 mm and similar resection extents, the GGO-predominant subgroup had similar histological characteristics and prognosis with the solid-predominant subgroup. Thus, a solid component size of 20 mm or less may be considered as a feasible criterion for guiding sublobar resections.

Another significant change brought by the use of CT screening was increased detection of GGO-containing nodules. It should be noted that not all patients included in the LCSG trial were diagnosed with adenocarcinomas. Neither was it known how many adenocarcinoma patients included had GGO-containing lesions representing a relatively indolent histology. Consequently, doubts were raised whether the results of the LCSG trial could also apply to these GGO-containing adenocarcinomas that have increasingly become the object of surgical treatment nowadays (19,20). Recent studies have shown that patients with GGO-containing nodules especially those pure GGO lesions without solid component, had favorable prognosis after sublobar resections, even with a total lesion size >20 mm (21-23). Our results were in accordance with these reports in that pure GGO had favorable histological characteristics and prognosis. We found that visceral pleural invasion and histological micropapillary or solid components were observed in merely 0.2% and 0.8% of patients in the pure GGO group, respectively. And there was no lymphovascular invasion or lymph node metastasis observed. Although 33.3% of patients with pure GGO >20 and ≤30 mm in size received sublobar resections, 5-year OS was 100% in this group. These results indicated that sublobar resections were feasible for pure GGO lesions ≤30 mm when satisfactory parenchymal resection margin could be guaranteed.

We acknowledged that this study had several limitations. First, the data was retrieved retrospectively from a prospectively kept database of a single institution, which inevitably had intrinsic biases. Second, although PSM was helpful in eliminating potential confounding factors, the sample size was reduced to some extent. Third, there were significant differences in histological characteristics and prognosis between the 157 matching pairs of GGO-predominant and solid-predominant nodules of similar total lesion size, but not between the 73 matching pairs of nodules with similar solid component sizes. This should be interpreted with caution because of a more robust statistical power in the former analysis. Moreover, resection margin is considered as an important factor relating to prognosis after sublobar resections for NSCLC. But we were unable to examine the relationship between resection margin and the outcomes because of the retrospective nature of our study. However, our study provides useful information on how future prospective trials should be designed in order to better define the appropriate resection extent for early stage GGO-containing lung adenocarcinomas.

Reporting Checklist: The authors have completed the STROBE reporting checklist. Available at http://dx.doi.org/10.21037/tlcr-21-132

Conflicts of Interest: All authors have completed the ICMJE uniform disclosure form (available at http://dx.doi.org/10.21037/tlcr-21-132). The authors have no conflicts of interest to declare.

Ethical Statement: The authors are accountable for all aspects of the work in ensuring that questions related to the accuracy or integrity of any part of the work are appropriately investigated and resolved. The study was conducted in accordance with the Declaration of Helsinki (as revised in 2013). This study was approved by the institutional review board of the Shanghai Chest Hospital [No. KS(Y)1668] and informed consent was waived due to the retrospective nature of the study.