Unresectable stage III non-small cell lung cancer (NSCLC) in patients with good performance status is treated with concurrent platinum based chemotherapy with definitive dose radiation (CCRT) followed by the PD-L1 inhibitor, durvalumab (1). The addition of durvalumab to CCRT improved survival from 55.6% to 66.3% at 24 months (1). Although this improvement in survival is practice changing, a large number of stage III NSCLC patients still have a poor prognosis. In 2020, it is estimated there will be 229,000 new cases of lung cancer (2) of which stage III cancer is expected in approximately 30% of all NSCLC cases.

Serine/threonine kinase 11 (STK11), also known as liver kinase B1 (LKB1), is a gene found on chromosome 19p13. Germline mutation of STK11 is associated with Peutz-Jeghers Syndrome (PJS) (3). Patients with PJS can develop intestinal hamartomatous polyps and are more likely to develop malignancies such as gastrointestinal, testis, ovary, and breast cancers (3). In lung cancer, somatic mutations of STK11 are seen in up to 42% of NSCLC; however, most studies have shown a mutation frequency of approximately 20% (4). STK11 functions as a tumor suppressor gene and is involved in the activation of AMP-activated protein kinase (AMPK), which modulates cell glucose and lipid metabolism (5). More importantly, in-vivo studies indicate that STK11 is involved in the differentiation and metastases of lung cancer (6). STK11 inactivation leads to increase in pro-inflammatory cytokines such as CXCL7 and causes a shift in the microenvironment with neutrophil accumulation and decrease in T cell lymphocytes (7,8).

The effect of STK11m on outcomes of stage III NSCLC treated with curative intent is unknown. It is unclear whether STK11m affects prognosis of stage III NSCLC or predicts response to ICI consolidation after CCRT. In advanced stage NSCLC, STK11m has been associated with poor response to chemotherapy and ICI, and inferior survival outcomes (9-15). In this study, we sought to explore STK11m as a prognostic genetic alteration in stage III NSCLC patients managed with definitive chemoradiation +/− consolidative ICI. We present the following article in accordance with the REMARK reporting checklist (available at https://dx.doi.org/10.21037/tlcr-21-177).

The study was conducted in accordance with the Declaration of Helsinki (as revised in 2013). The informed consent from the patients were waived. The study was approved by institutional Review Boards (IRBs) of University of Iowa Hospitals and Clinics, Indiana University Health, Northwestern Memorial Hospital, and the University of Illinois at Chicago. The 4 institutions provided a total of 16 patients with stage III NSCLC known to have STK11m diagnosed between 2013 and 2019. Of these, 11 received CCRT and were included in the study. A comparison group of 59 patients with STK11w stage III NSCLC who received CCRT diagnosed between 2013 and 2019 were identified at University of Iowa and served as a comparison group. Stage III NSCLC, receiving any CCRT, and having a known STK11 mutational status were requirements for inclusion in the analysis in this study.

The patients’ charts were reviewed for clinical and demographic characteristics. These included age, sex, smoking history, stage, ECOG performance status, histology, STK11, KRAS and TP53 status, PD-L1 expression, and treatment details including radiation, chemotherapy and immunotherapy. STK11m was identified by next generation sequencing of the tumor tissue using the platform of choice available in the institutions participating in this study. Specific STK11 locus alteration information was not collected. Information about other NSLCC driver mutations such as EGFR and ALK were not collected.

Chi-squared or Fisher’s exact tests were used to compare categorical variables, and Wilcoxon rank sum tests were used to compare continuous variables between STK11 wild type and mutant. Survival probabilities were estimated and plotted using the Kaplan-Meier method. Cox regression models were used to assess the effects of clinical, pathologic, and treatment variables on progression-free survival (PFS) and overall survival (OS). The time for PFS was calculated from the date of diagnosis until progression or death due to any cause. The time for OS was calculated from the date of diagnosis until death due to any cause. Estimated effects of predictors are reported as hazard ratios (HR) along with 95% confidence intervals. All statistical testing was two-sided and assessed for significance at the 5% level using SAS v9.4 (SAS Institute, Cary, NC).

After excluding the 5 patients with STK11m who did not receive CCRT, a total of 70 pts with stage IIIA-C NSCLC were included in the analysis; 11 patients with STK11m and 59 patients with STK11w (Table 1). When STK11m patients were compared to STK11w, there was no significant difference in the gender distribution among the two groups. Numerically, the proportion of age ≤65 years in the STK11m group compared to STK11w was higher but this was not statistically significant (82% vs. 54%, P=0.11). When all patients including the 5 with STK11m who did not receive CCRT were accounted for in the analysis, the STK11m patients were significantly younger (≤65 years) (P=0.05) (Data not shown). Majority of the patients included were current/former smokers regardless of the STK11 mutational status. Regarding performance status, most of the patients included in the study had an ECOG performance status of 0-1. Histology was divided into non-squamous and squamous NSCLC. Non-squamous histology was predominant in both the STK11w and STK11m groups comprising 62.7% and 72.7%, respectively, without noticing statistically significant difference (P=0.73). There was no significant difference in the frequency of stage IIIA versus stage IIIB/C among the groups. The frequency of KRAS or TP53 mutations were not significantly different between the STK11 groups. PD-L1 expression was <1% in 63% of the STK11m patients, but there was no significant difference in the PD-L1 expression categories among the STK11m and STK11w groups. 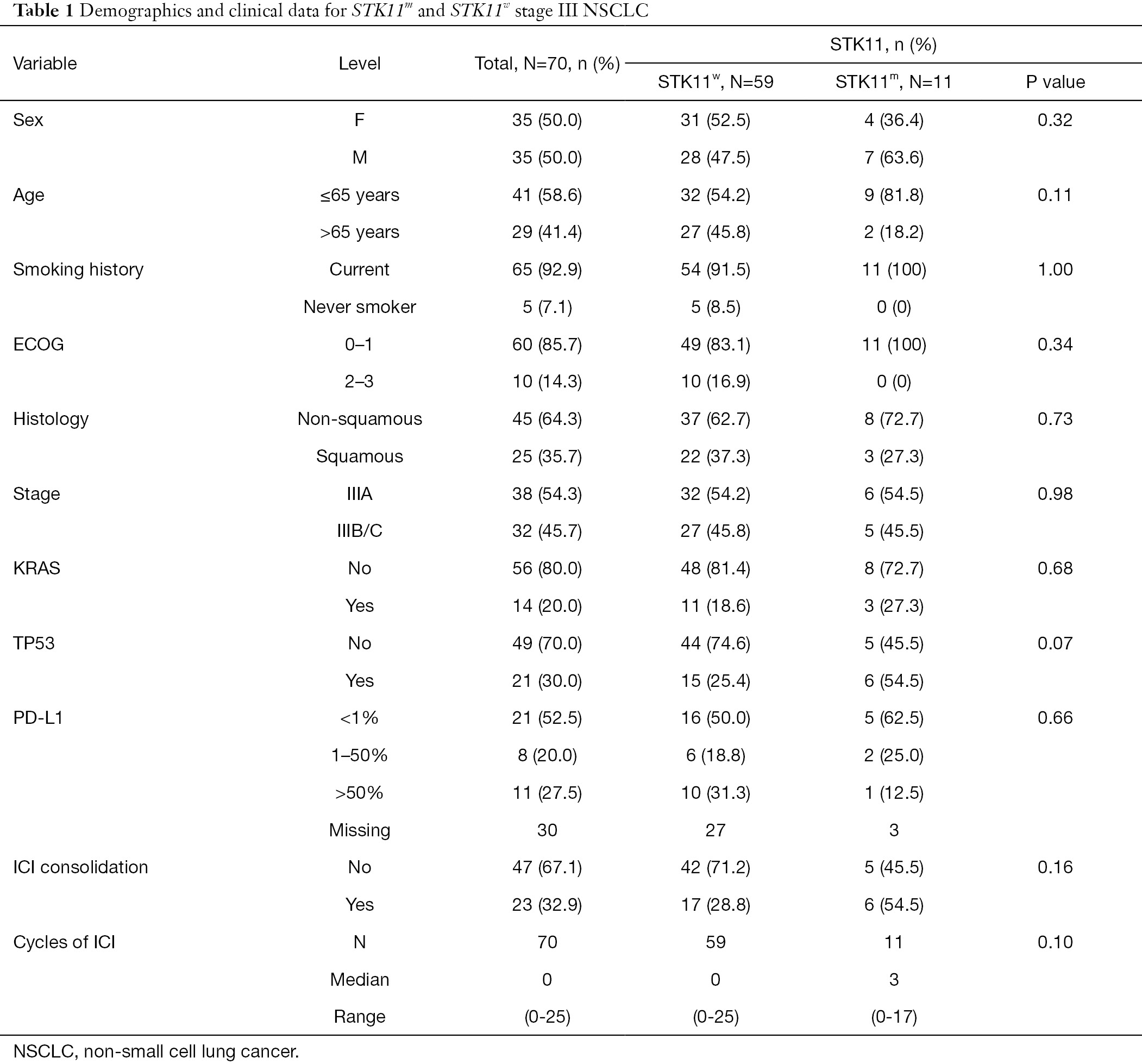 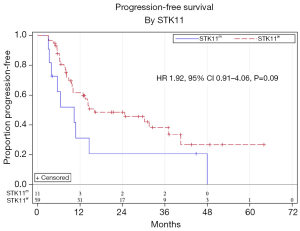 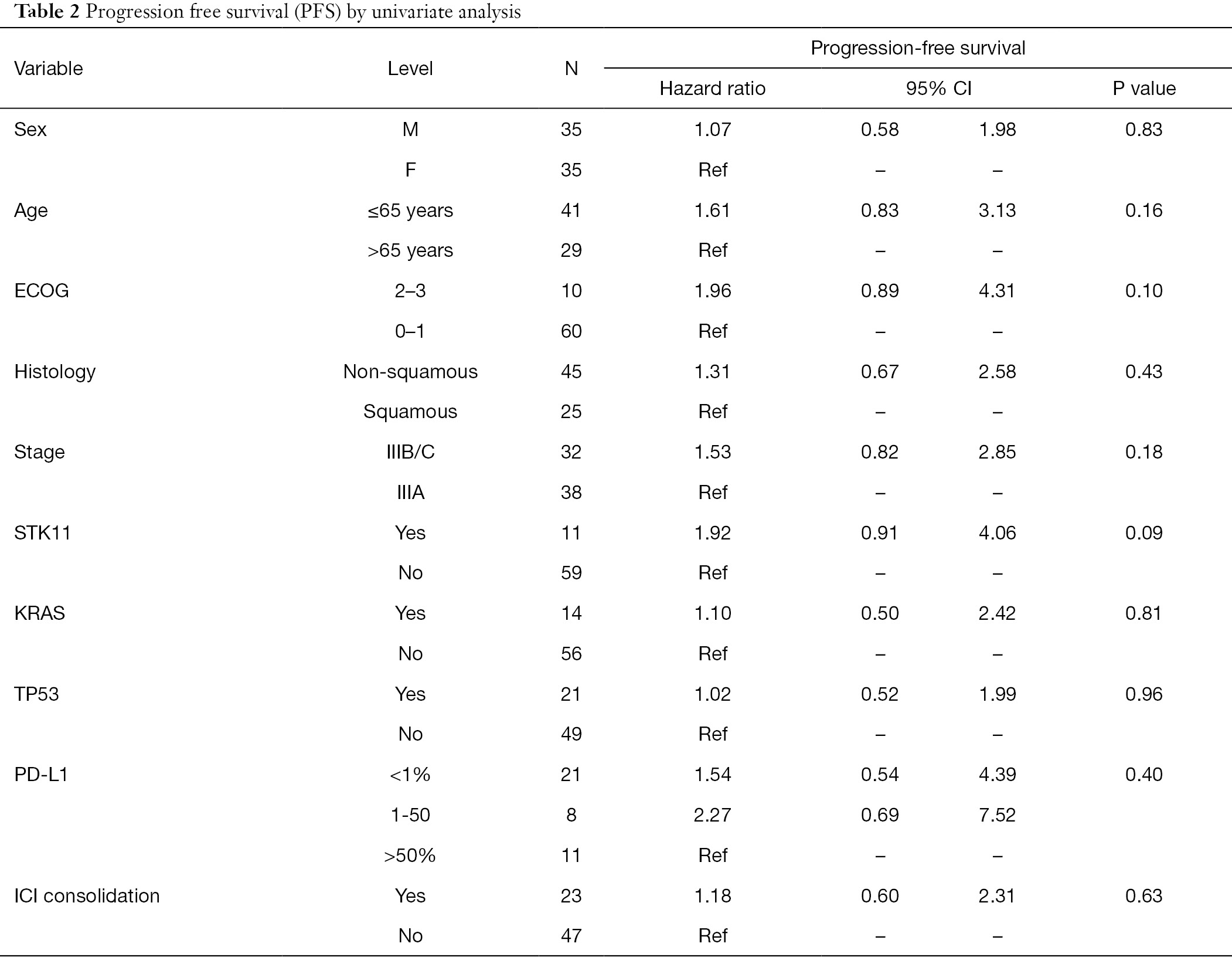 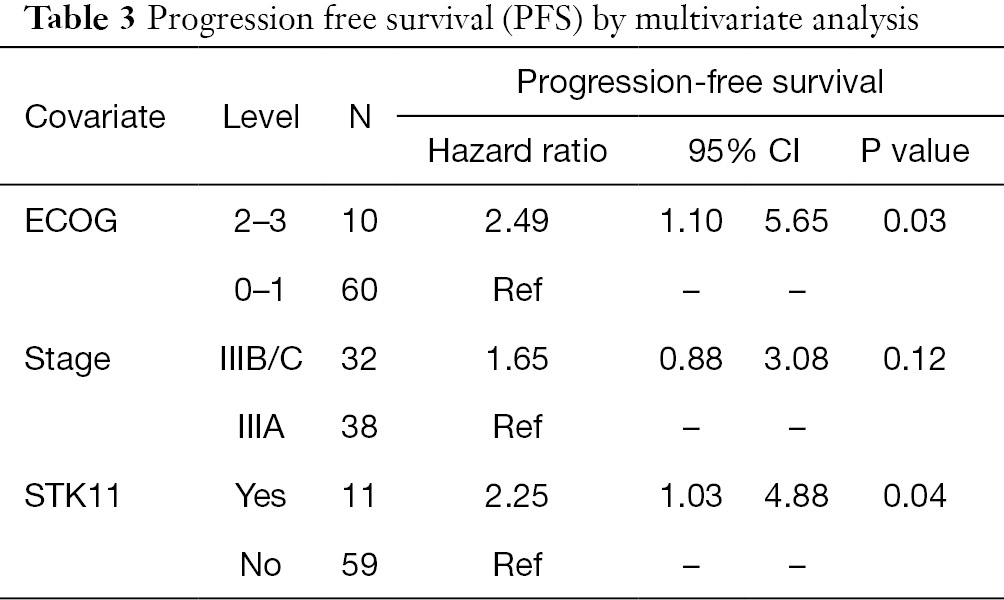 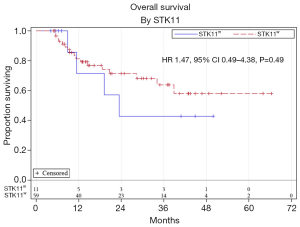 The effect of STK11m on benefit from ICI consolidation post CCRT in stage III NSCLC could not be concluded in our study due to the small sample size. In advanced stage NSCLC, STK11m was associated with low PD-L1 expression and resistance to PD-1/PD-L1 ICIs (11). However, the association of STK11m and poor response to ICI is still debatable as other reports showed good response of advanced stage STK11m NSCLC to ICI (18-20). In another driver mutation, the EGFR rather than STK11 mutation, it was questioned on retrospective studies whether there is significant benefit from durvalumab after CCRT (21,22). In a cohort of 60 patients with STK11m cancers that included NSCLC and others, STK11m correlated with poor prognosis without specifically observing inferior outcomes associated with immunotherapy (23). Potential mechanisms for the STK11m resistance to ICI include impaired activity of effector T cells, epigenetic changes of tumor cells, modification of the cytokine and/or chemokine milieu, and diminished tumor antigenicity (11). In our study, 5/11 (63%) STK11m patients had PD-L1 <1% and 6/11 (55%) received ICI consolidation. The ICI consolidation used included durvalumab or pembrolizumab (pembrolizumab received on a clinical trial). No conclusions can be made about resistance of STK11m to ICI consolidation or whether a specific PD-1/PD-L1 inhibitor would function differently in the setting of STK11m in stage III NSCLC. This will need to be further studied in future trials.

Other clinical and demographic features of stage III NSCLC patients with STK11m were explored. The STK11m patients were more likely to be ≤65 years old (82%); however, there was no significant difference in age between the STK11m and STK11w patients. This is consistent with another retrospective study that examined STK11m in patients with stage I–IV non-squamous NSCLC where patients with STK11m were found to be significantly younger than STK11w patients (mean age of 58.6 vs. 61.9 years, respectively) (10). This retrospective study (10) also noted smoking to be associated with STK11w which was not seen in our study.

The authors acknowledge limitations that apply to this study. First, the retrospective nature, the small sample size, and the imbalance in the number of STK11w versus STK11m patients are recognized. Second, the majority of patients in this study were identified from stage IV NSCLC databases who were initially diagnosed and treated for stage III disease. This might inherently reflect a selection bias of stage III NSCLC with more aggressive biology and tendency for metastases. Third, it is unknown if STK11m was present at diagnosis of stage III NSCLC or was acquired subsequently upon progression to stage IV.

In stage III NSCLC patients who received CCRT, STK11m was associated with worse PFS compared to STK11w. Larger studies are needed to explore whether STK11m plays a role in predicting less benefit from ICI consolidation in stage III NSCLC.

Funding: Department funding by the Division of Hematology and Oncology at the University of Iowa Hospitals and Clinics.

Reporting Checklist: The authors have completed the REMARK reporting checklist. Available at https://dx.doi.org/10.21037/tlcr-21-177

Conflicts of Interest: All authors have completed the ICMJE uniform disclosure form (available at https://dx.doi.org/10.21037/tlcr-21-177). MF serves as an unpaid editorial board member of Translational Lung Cancer Research from Sep 2019 to Sep 2021. TK reports personal fees from AstraZeneca for consulting and advisory board, and personal fees AstraZeneca, OncLive, and Targeted Oncology for speaking. NHH’s institution received grant support from BMS, Genentech, Merck on studies that in which he is the PI, and is the medical writer for UptoDate and served on a DSMB for a study sponsored by Beyond Spring. The other authors have no conflicts of interest to declare.

Ethical Statement: The authors are accountable for all aspects of the work in ensuring that questions related to the accuracy or integrity of any part of the work are appropriately investigated and resolved. The study was conducted in accordance with the Declaration of Helsinki (as revised in 2013). The informed consent from the patients were waived. The study was approved by institutional Review Boards (IRBs) of University of Iowa Hospitals and Clinics, Indiana University Health, Northwestern Memorial Hospital, and The University of Illinois at Chicago.