Lung function impairment in lung cancer screening: discordance between risk and screening outcomes when looking through a PRISm

Retrospective (post-hoc) analyses of lung cancer screening studies enable researchers the unique opportunity of identifying sub-cohorts of patients who are at greatest risk of lung cancer. In these real-world studies (1-3), the lung cancers are diagnosed prospectively and the subjects are broadly representative of those currently participating in screening. Such an approach allows the screening community to better understand, assess and refine the factors underlying risk of lung cancer (4). There is growing interest in targeting those at greatest risk, with the primary aim of improving screening efficiency (4). It has been suggested that this risk-based targeted screening, using more than age and smoking criteria, should maximise the number of lung cancer deaths averted per person screened (5). However, such an approach assumes a linear relationship between the risk and the benefits of screening (4). We ask “Is it safe to assume that enriching screening to those at greatest risk will necessarily optimise the benefits of screening at the individual level?”.

Kaaks and colleagues stratified 2,029 subjects randomised to the computed tomography (CT) screening arm of their study (6), according to baseline pre-bronchodilator spirometry. They defined 3 mutually exclusive groups of screening participants, eligible according to age (50–69 years old) and smoking history (>15 pack years and quit <10 years), into those with airflow limitation (AFL) [chronic obstructive pulmonary disease (COPD), forced expiratory volume in 1 second/forced vital capacity (FEV1/FVC) <70%, n=369], preserved ratio impaired spirometry (PRISm; FEV1/FVC ≥70 and FEV1% predicted <80%, n=311) or normal spirometry (n=1,307). The prevalence for the normal, COPD and PRISm groups was 65.7%, 18.6%, and 15.7% respectively, although only 40% of those with impaired lung function (COPD or PRISm) had been diagnosed with airways disease. They found those with impaired lung function in the PRISm group had an elevated risk of lung cancer, independent of smoking, and more aggressive lung cancers (also observed in those with COPD). The latter was suggested by a lower prevalence of adenocarcinomas and higher prevalence of squamous cell cancers. Importantly they also showed that relative to those with normal spirometry, those with COPD and PRISm had less early-stage lung cancers, more cardiovascular comorbidity, shorter life expectancy and greater mortality from both lung cancer and non-lung cancer causes. However, the study was somewhat underpowered for these secondary endpoints. Critically, Kaaks and colleagues were unable to determine whether the observations they report in those with PRISm might affect lung cancer mortality reduction according to screening arm, as spirometry data was not collected for those in their usual care control arm.

We have reported a similar post-hoc analysis in a subgroup of the NLST, where over 18,000 subjects in the American College of Radiology Imaging Network (ACRIN) arm underwent pre-bronchodilator spirometry (7). In this analysis, we showed that those with PRISm (also termed GOLD U) had an elevated risk of lung cancer and that this risk roughly equated to those with mild COPD (GOLD 1, FEV1% predicted ≥80%). In this study we also showed that the increased risk of lung cancer associated with a reduced FEV1% was observed at <80% predicted (Fig. 2 in ref. 7). In this analysis we confirm the findings of Burrows and colleagues (8), showing %predicted FEV1 ≤60% confers a greater risk of lung cancer than age and pack years. In conclusion, both the LUSI and NLST post-hoc analyses support previous studies confirming that an increased impairment of lung function (reduced %predicted FEV1 <80%) is associated in a linear inverse relationship with the risk of lung cancer (9-11). It is here that our conclusions in regards the relevance of impaired lung function on outcomes from screening, markedly diverge from those who believe targeting those at greatest risk will necessarily and consistently achieve the best outcomes for participants. We believe that the increased risk of lung cancer, conferred by co-existing impairment in lung function, does not automatically lead to greater benefits from screening (12-14).

In a subset of the NLST cohort, when comparing outcomes according to screening arm, it has been reported that the relative reduction in lung cancer deaths from CT-based screening [relative to those randomised to the chest X-ray (CXR) arm] was reduced by about one half for those with AFL (COPD) (15) and that this is primarily due to a markedly reduced benefit in those with severe or very severe COPD (GOLD 3–4) (14). We have previously reported that with increasing risk of lung cancer, according to the PLCOM2012 model, there is increasing prevalence of COPD (52% in PLCOM2012 quintile 5 in the NLST) (14). This is relevant because as you enrich for COPD, the surgical rate for lung cancer declines, the histology of the lung cancers is more likely to be aggressive [more squamous cell and more non-small cell lung cancer-not otherwise specified (NSCLC-NOS) with less adenocarcinomas, i.e., “histology shift”] and there is a greater death rate from non-lung cancer causes (16). Others have reported a higher complication rate in this group (17). In a further post-hoc analysis of this NLST subgroup, the great majority (>80%) of the lung cancer deaths averted in the CT arm (relative to the CXR arm) was found in those with normal lung function and undiagnosed COPD (18). Several investigators have found the majority of lung cancer screening participants with AFL have never been previously diagnosed with COPD (18-20). We conclude from these analyses that targeting those at greatest risk for lung cancer, using traditional risk factors based on clinical parameters (e.g., PLCOM2012) but excluding spirometry, enriches the screening population with people who have a high prevalence of largely unrecognised COPD. This is problematic as many in this group will have worse outcomes from screening (less reduction in lung cancer deaths and more complications) due to the many factors outlined above. This raises the question “How do those with PRISm do in regards to screening outcomes according to the NLST data?”.

Screening outcomes for those in the NLST—looking through a PRISm

When the ACRIN sub-cohort of the NLST (n=18,463) was subdivided into the same three mutually exclusive groups described by Kaaks and colleagues (6), the prevalence for the normal, AFL (COPD) and PRISm groups was 49.4%, 33.4% and 17.2% respectively. The higher rates of COPD and PRISm in the NLST compared to LUSI are expected given the older age and pack year eligibility requirement of the NLST (Table 1). In agreement with the results from LUSI, we found there was a linear increase in lung cancer prevalence (Figure 1) as the mean %predicted FEV1 reduced across the 3 groups. Those in the PRISm group had more aggressive (or advanced) lung cancer as suggested by lower rates of stage 1–2 disease at diagnosis, a higher prevalence of squamous cell and NSCLC-NOS and less adenocarcinoma (“Histology shift”). These findings also accord with those reported in the LUSI study (6). In addition, those with PRISm had lower rates of surgery for their lung cancers which may relate to the greater cardiovascular comorbid disease and more aggressive/advanced lung cancers (Table 1). Comparable to the findings reported in the LUSI study, we found that the characteristics of lung cancer in those with PRISm (stage, histology and surgery), were comparable to those with COPD and statistically different to those with normal spirometry. However, when we analysed the outcomes after stratification by screening arm, those with normal spirometry did better with CT compared to CXR screening (45% relative reduction in lung cancer mortality, P=0.0082). The relative reduction in lung cancer mortality for those with impaired lung function (PRISm and COPD) was less than half (14% and 18% respectively) and too underpowered to be significant. More importantly our findings “when looking through a PRISm”, strongly challenge the assumption that increased risk leads to greater benefits from screening. 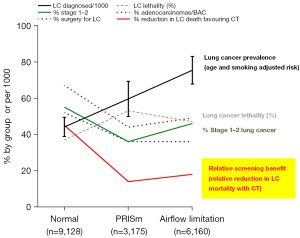 In conclusion, we suggest that assuming increasing risk of lung cancer confers a greater benefit from screening may not be justified for a significant proportion of high risk ever smokers otherwise eligible for lung cancer screening. This may be due to the deleterious effects of comorbid diseases such as COPD, and possibly diabetes, on lung cancer outcomes. This has been shown to be the case in a large real-world screening population (NLST) and confirms that impaired lung function (COPD or PRISm) may have an important effect on whether a high-risk smoker benefits from screening. We also conclude that while a reduced %predicted FEV1 is certainly linked to an increasing risk of lung cancer, those with PRISm provide an excellent example of the discordance between increasing risk and increasing benefit from screening. We hypothesise that this might be due to the deleterious effects of having both impaired lung function and diabetes. While it may be argued that targeted screening, using a risk based approach will increase the number of lung cancers identified according to the number screened (i.e., greater screening efficiency), this does not mean that a greater benefit from screening can be assumed at the individual level (12-14)—see Figure 1. When costs, life-expectancy and patient preference are considered, those of intermediate risk (deciles 3–8 or quintiles 2–4) actually do better than those in deciles 1–2 and 9–10 (22-24). Very little is spoken about the harms of screening, or potential for overtreatment, in these subgroups of otherwise eligible smokers at the greatest risk. We suggest that by comparing the outcomes of screening, subgroups of high risk smokers can be identified who will benefit most and this does not always correlate with their underlying risk for lung cancer (25). Unlike other forms of cancer screening, screening for lung cancer includes many people with largely unrecognised impairment in their lung function (e.g., COPD or PRISm) and greater comorbid disease (including diabetes) (14). These comorbidities are associated with more aggressive or advanced lung cancers and reduced life expectancy, which for many may attenuate the benefits of screening (12,22,25). Spirometry helps identify those with impaired lung function and reduced life expectancy. The decision to screen on an individual level requires careful assessment of both the risk and the evidence for clear benefit, and if the latter continues to be ignored, we are in danger of causing more harm than good for a sizable proportion of the screening community. Collectively, the results from the LUSI and NLST trials suggest that impaired lung function (reduced %predicted FEV1) is an important comorbid condition that disproportionately impacts outcomes from screening and should be considered in weighing up the risks, harms and benefits of lung cancer screening.

Provenance and Peer Review: This article was commissioned by the editorial office, Translational Lung Cancer Research. The article did not undergo external peer review.

Conflicts of Interest: All authors have completed the ICMJE uniform disclosure form (available at https://tlcr.amegroups.com/article/view/10.21037/tlcr-22-634/coif). The authors have no conflicts of interest to declare.

Ethical Statement:The authors are accountable for all aspects of the work in ensuring that questions related to the accuracy or integrity of any part of the work are appropriately investigated and resolved.