Bronchioloalveolar carcinoma (BAC) is a relatively rare subtype of adenocarcinoma that typically arises in the periphery of the lung and grows along alveolar walls, without invasion of stromal, pleural, or vascular structure, thus preserving the underlying structure of the lung (1). Patients often present with a non-specific peripheral nodule or with a fairly specific pneumonic-type pattern (2). The pneumonic type of BAC shows lobar consolidation on plain radiography and is often difficult to differentiate from pneumonia (3,4). Many patients have the symptoms of cough, chest pain, and sputum production, which make it more difficult to distinguish BAC from infectious pneumonia and other pulmonary inflammatory processes (5). Most pneumonic-type adenocarcinomas (P-ADCs) contained a mixture of BAC and other histologic subtypes, including an invasive component (6). This case report describes a patient with recurrent lesions in left lower lung, and repeated symptoms of cough, sputum production for about 8 years, who was finally diagnosed as high differentiated adenocarcinoma.

A 63-year-old male with 20-pack year history of smoking presented to the hospital on April 15, 2014, because of recurrent cough, white sputum for 5 months. The symptoms started in the middle of November 2013. And he was firstly admitted to the local hospital, antibiotics (Tazocin and Levofloxacin) were used for 2 weeks. However, the symptoms did not release. Then he came to our hospital for a second opinion. He complained of no dyspnea, chest pain, fever, chills, or night sweats. The patient had a history of hypertension for 2 years, and he did not take anti-hypertension drugs regularly. He had no exposure to poisons, radiogen, or chemicals. The family history was not significant.

On physical examination, he had no crackles or wheezes in the lung. Routine test of blood, urine, and stool were normal. Carcinoembryonic antigen (CEA) was 6.7 μg/L, while normal range was less than 9.7 μg/L in our hospital. A chest computed tomography (CT) scan on admission showed considerable amount of effusion in left upper lobe, and bilateral lower spaces. Air bronchograms and bronchus stenosis were presented in left lower lobe (Figure 1). 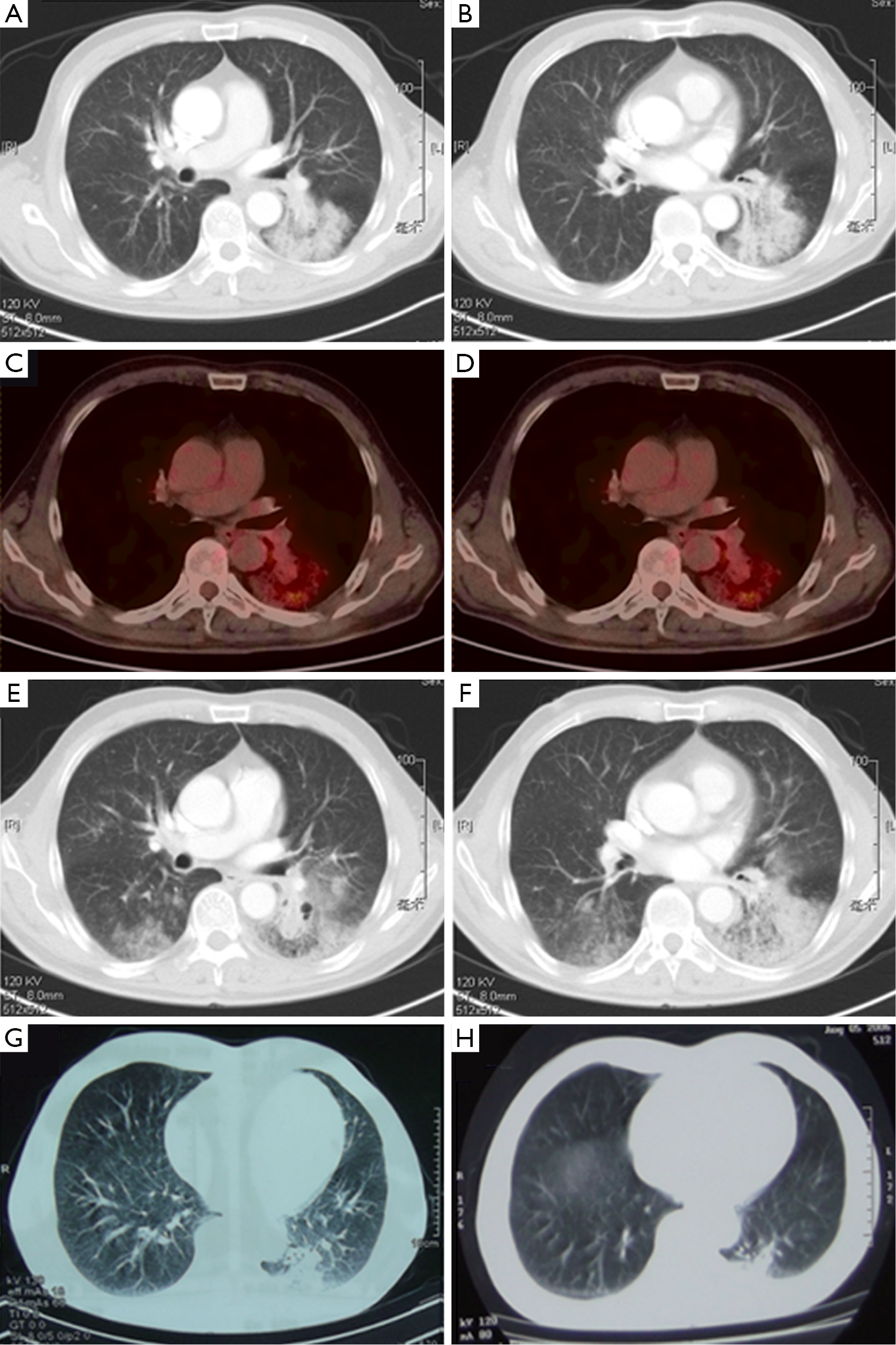 On April 17, 2014, the patient accepted CT-guided trans-thoracic cutting needle lung biopsy (Figure 2), and small pieces of lung tissue showed inflammatory fibroplasias, occasionally glandular structures could be found with mild to moderate atypia (Figure 3). Lung cancer still could not be totally excluded till then, and we planned a re-biopsy. However, the chest CT scan before puncture showed: (I) a small amount of pneumothorax in the left lung, and another puncture might increase the risk for tension pneumothorax; (II) the lesions of the left lower lung had some absorption, cancer lesions might not absorb without anti-cancer therapy. The preliminary diagnosis of this patient was “pulmonary infection”. We proposed him to accept active anti-biotic treatment, and had a follow-up of CT scans after a month. 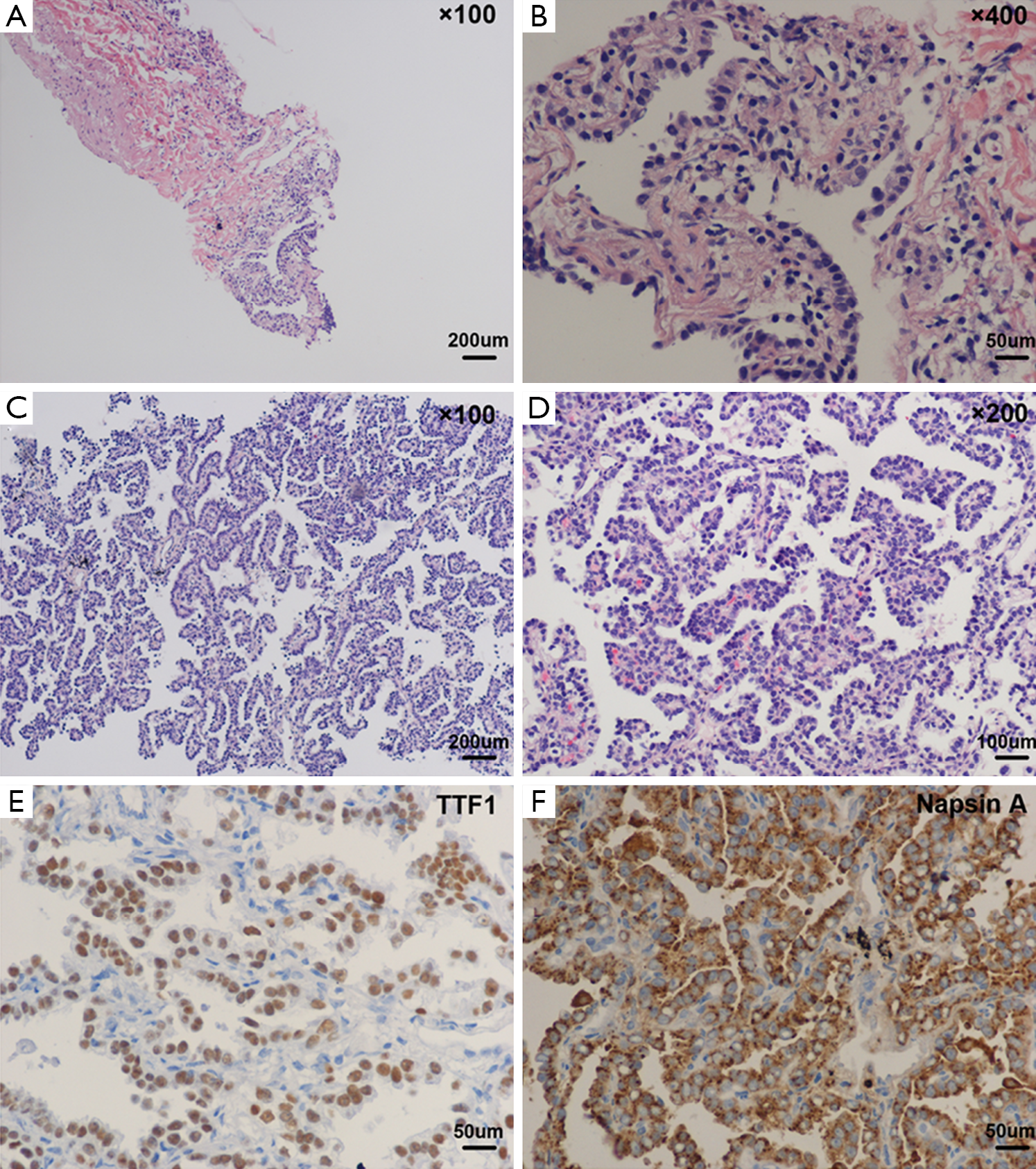 After anti-infectious therapy for another 2 weeks, the symptoms of cough and sputum released. On May 12, 2014, the patient came to the outpatient department. Positron emission tomography and computed tomography (PET-CT) scan reported patchy shadow in both lungs, and a heterogeneous deposit of [18F] Fluoro-2-deoxy-D-glucose with a maximum standardized uptake value (SUV) of 2.2 in left lower lung. In addition, hyper-metabolic lymph nodes were detected in bilateral hilar (maximum SUV of 1.6). PET-CT findings still suggested the diagnosis of bilateral inflammatory or infectious process (Figure 1C,D). The patient was recommended to have further anti-biotic therapy with close follow-up.

In August 2014, the patient complained that the symptom of cough and sputum greatly worsen. He felt chest tightness and shortness of breath after activity. He was hospitalized to our department again on August 13, 2014. There were some clues for the diagnosis of lung cancer till then: (I) serum CEA was 17.1 μg/L; (II) after the treatment against infection, the symptoms gradually aggravated; (III) CT scans showed widespread, dense consolidation in bilateral lungs, especially in left lower lobe. And scope of lesions was significantly progressed compared to the CT scans of April 15, 2014 (Figure 1E,F).

On further questioning, the patient recalled that he used to experience community acquired pneumonia in left lower lung in the middle of 2006. He was performed with fine-needle aspiration (FNA) in local hospital, providing a specimen for cytological examination, and the result was negative. The lesions of the left lower lung absorbed a lot after antibiotic therapy (Figure 1G,H showed the CT scans before and after antibiotic therapy, respectively). There was no follow-up between 2006 and 2014. It demonstrated that the lesions of left lower lobe had existed for about 8 years, and “recurrent pneumonia” might not be a proper diagnosis for this patient.

He received four cycles of first-line chemotherapy (pemetrexed plus cisplatin) from August 21, 2014. CT scans showed pulmonary lesions gradually progressed, and concentration of serum CEA also slowly increased (35 μg/L on November 25, 2014). Then he got four cycles of chemotherapy with docetaxel and nedaplatin from November 26, 2014. Chest CT scans showed pulmonary lesions did not reduce, even the CEA level dropped to an extent (19.5 μg/L on February 9, 2015). And the patient is still under follow-up till now.

P-ADC is a specific subtype of lung adenocarcinoma, which often shows large opacities in chest image. It is often misdiagnosed as pneumonia, tuberculosis or interstitial lung disease and other benign lesions. The radiographic similarity of BAC to pneumonia tends to delay the correct diagnosis (7).

Chest CT scans of this patient shows multifocal/diffuse disease, especially in left lower lobe. And the differential diagnosis based on these findings included lung adenocarcinoma, and pneumonia. Lung adenocarcinoma may appear on CT scans as a solitary lesion, segmental/lobar opacity, or multi-focal/diffuse disease. Exudative lesions were found on CT scans, what should bring us to the consideration of lung cancer? This is the first point to be discussed.

P-ADC shows patchy shadow or exudation in CT scans, mainly due to cancer cells grows along alveolar walls. Adenocarcinoma typically arises in the periphery, and could be manifested as ground-glass lung opacities. After the lumen was filled with cancer cells or mucus secreted by cancer cells, we could find diffuse consolidation in CT scans. On these basis, (I) CT findings favoring the diagnosis of BAC included an air-filled bronchus within the consolidation with stretching, squeezing, sweeping, widening of the branching angle and bulging of the inter-lobar fissure (8); (II) there will be more chances for patients to have adenocarcinoma when they present with consolidative pneumonia included coexisting nodules and a peripheral distribution of consolidation (7). When come back to the reported patient, the lesions were located in left lower lung, involving most area of this lobe, with air-filled bronchus within the consolidation. As progression of disease, multiple nodules and patchy shadow formatted in bilateral lung. It was consistent with the characteristics of P-ADC of lung imaging.

Since 2001, PET-CT scan has rapidly replaced stand-alone PET and has become a key tool in the diagnosis and staging of lung cancer (9). However, it has been reported that PET-CT did not work well in patients suffering from BAC (10), while preoperative SUVmax of PET-CT was more accurate at predicting negative N2 and N1 metastasis (11). It needs further researches for the application of PET-CT to distinguish BAC and infectious pneumonia.

The patient firstly found the lesions of left lower lobe from July 2006, and he accepted lung biopsies for three times. Why did not he get the final diagnosis of adenocarcinoma until August 2014? He experienced FNA in 2006, and got negative results. The reasons might be: (I) the patient had fever during that course of disease. And the lesions almost disappeared after anti-infectious therapy, which recommended that pulmonary infection might be the main part of pulmonary lesions; (II) FNA provided a specimen for cytological examination, the false-negative rate might be higher than cutting needle lung biopsy.

The patient was performed with second biopsy in April 2014, and still did not get the definite diagnosis of adenocarcinoma. The site of puncture might be important here. In April 2014, the central lesions were chosen for biopsy, which suggesting the background of inflammatory disease with some clues of ductal hyperplasia; in August 2014, peripheral parts of the lesions were tested, and according to the PET/CT image, the peripheral lesions had higher metabolism of glucose (Figure 1C,D). It suggested that multiple point puncture might increase the positive rate of pathology in such patients.

We report the case of a 63-year-old man with a history of recurrent “pneumonia”. Clinical characteristics and close follow-up is also important for the diagnosis of P-ADC (15): (I) recurrent symptoms of infectious, such as cough, sputum, dyspnea, and so on, last for a long time. After active anti-infectious therapy, the lesions did not absorb, even gradually progress. During the course, it might have transient absorption as the accompanied infectious lesions are cured. However, the lesions still show a slow trend of increasing; (II) most patients complain the symptoms of cough, dispnea, hemoptysis, fever, chest pain, sputum, and weakness (16); (III) serum tumor markers, especially CEA might be higher than the normal range.

As in most previous BAC series, curative surgery is the first choice for P-ADC, which brings significantly longer survival than other therapies (17). Response rates to chemotherapy have been reported between 21% to 32% (18), and were either lower than or equal to the rates in patients with all types of adenocarcinoma. Pemetrexed has been reported to be active and well tolerated in patients with adenocarcinoma BAC subtypes (19). In this case, the patient did not get response to chemotherapies (including pemetrexed). As the EGFR status was wild, the patient was not suitable to choose EGFR-TKIs as first-line therapy. The PFS of this patient was about 3 months, and overall survival is being followed up currently. Cetuximab might be a potential choice for further treatment of this patient (20).

In summary, we describe a case of 63-year-old man with imaging manifestations of pneumonia finally diagnosed as adenocarcinoma. P-ADC may radiographically and clinically resemble infectious pneumonia, hypersensitivity pneumonitis, and various vasculitic processes, which cause the delay of final diagnosis. Lack of fever and leukocytosis, no response to antibiotics should raise suspicion about a diagnosis of pneumonia. Biopsy or cytologic examination is the only means of ruling in a diagnosis of adenocarcinoma. In the CT scans, air bronchogram, and accompanied nodules or patches might also be considered as the clues for malignancy.

Funding: This work was supported by the National Science Foundation of Jiangsu Province of China (BK20140736 to Dongmei Yuan).

Informed consent: Written informed consent was obtained from the patient for publication of this Case report and any accompanying images.