Drug development against the hippo pathway in mesothelioma

Malignant pleural mesothelioma (MPM) is a deadly disease with a poor prognosis that remains a treatment challenge. The diffuse nature of malignant cells throughout the entire pleural cavity preclude a complete surgical resection and therefore developing successful treatments to eradicate all microscopic sites of disease is the only way by which we can hope to achieve long-term survival. However, MPM is notoriously resistant to conventional cytotoxic chemotherapy regimens. Surveillance, epidemiology, and end results (SEER) medicare data show that medicare patients treated with only first-line chemotherapy of carboplatin or cisplatin plus pemetrexed have a median survival of only 7 months (1).

In the last 20 years there has been little progress to develop effective new therapies or dramatically improve survival. Countless failed clinical trials for novel chemotherapy agents against mesothelioma have floundered with bleak overall survival times and few patients responding to therapy. A review of British phase I MPM clinical trials between 2003 and 2015 had an 8-month median survival time with only 6% of patients having RECIST partial responses to therapy and 40% having RECIST stable disease for more than 3 months (2). The Mesothelioma Avastin Cisplatin Pemetrexed Study (MAPS) trial represented the first true clinical benefit in many years when it demonstrated a survival benefit of adding bevacizumab to cisplatin and pemetrexed with median survival times of 18.8 months among patients treated with the triple drug regimen versus 16.1 in patients treated with cisplatin and pemetrexed alone (3). Most recently, the explosion of immunotherapy has dramatically reshaped the oncology landscape for all cancers including MPM. Preliminary abstract data in MPM has been promising for some patients and immunotherapy has become an area of intense interest.

Preclinical work is underway in several of these pathways including the Sonic Hedgehog (SHH) pathway where is has been shown rate models that vismodegib, a smoothened inhibitor approved in basal cell cancer, impairs MPM growth. In a rat xenograft model, vismodegib has been shown to downregulate SHH target genes of Gli1 and Ptch1 as well as reducing tumor volume and tumor growth (6). Combining stem cell pathway inhibitors with standard chemotherapy can improve the efficacy of chemotherapy, for example in the Wnt stem cell pathway combining cisplatin with Wnt pathway inhibitors in vitro induces synergistic cell cycle arrest and colony formation (7).

Focal adhesion kinase (Fak) is critical for cancer stem cell survival and maintenance and the molecule Fak inhibitor defactinib or VS-6063 showed promising results in preclinical studies. Fak is overexpressed in epithelial and mesenchymal tumors and regulates cell adhesion, proliferation, migration and survival. There was much anticipation of Fak as a drug target in MPM because cells with Merlin deficiency, commonly lost in mesothelioma, are very sensitive to Fak inhibition (8). Also encouraging was that cancer stem cell enriched MPM cell subpopulations have been shown to be more sensitive to defactinib in vitro (4). Fak signaling is associated with resistance to cytotoxic chemotherapy and Fak inhibition also enhances cancer cell sensitivity to taxanes in vitro (9). However a phase II clinical trial of defactinib in mesothelioma was ended in late 2015 after interim analysis failed to show any benefit. There may be a future for clinical testing of Fak inhibitors with the addition of predictive biomarkers, such as Merlin deficiency, to better identify MPM patients who will respond to Fak inhibition (10). Targeting cancer stem cell pathways remains an important area of active research.

The hippo pathway and mesothelioma

The Hippo pathway is a highly conserved regulator of organ size and of stem cell proliferation and maintenance (11). Only a small handful of genes are frequently mutated in MPM and many of these gene are in Hippo pathway suggesting that Hippo plays a critically important role in the development and growth of MPM (12). One of the most frequently mutated genes in MPM is Neurofibromatosis type 2 (NF2) tumor suppressor, located at chromosome 22q12, and is detected in 40% to 50% of MPM tumors (12,13). Large tumor suppressor homolog 2 (LAST2) gene, which is located at chromosome 13q12, is another frequently inactivated gene that is detected in 13% of MPM tumors (12,14). Inactivation of NF2 and LATS2 by deletion and/or mutation often contributes to dysregulation of Hippo pathway (15). In addition to LATS2, its closest gene family member LATS1 another Hippo pathway gene, has also recently been identified to be dysregulated in MPM, though less commonly than LATS2. LATS1 is located on chromosome 6 and changes in copy number variation and fusions to Presenilin 1 (PSEN1) on chromosome 14 have been observed in MPM (12,16). Mammalian sterile-20 like kinase 1 (MST1) is an important upstream kinase in the Hippo pathway that has also been found to be dysregulated in MPM (16). The largest and most comprehensive genomic analysis to date of transcriptomes, whole exomes and targeted exomes from 216 MPM samples found Hippo pathway signaling to be the number one most significantly mutated pathway in mesothelioma with a Q-value of 1.70E-17, driven by mutations, copy number variations and fusions in NF2, LATS1, LATS2 and MST1 (Figure 1). 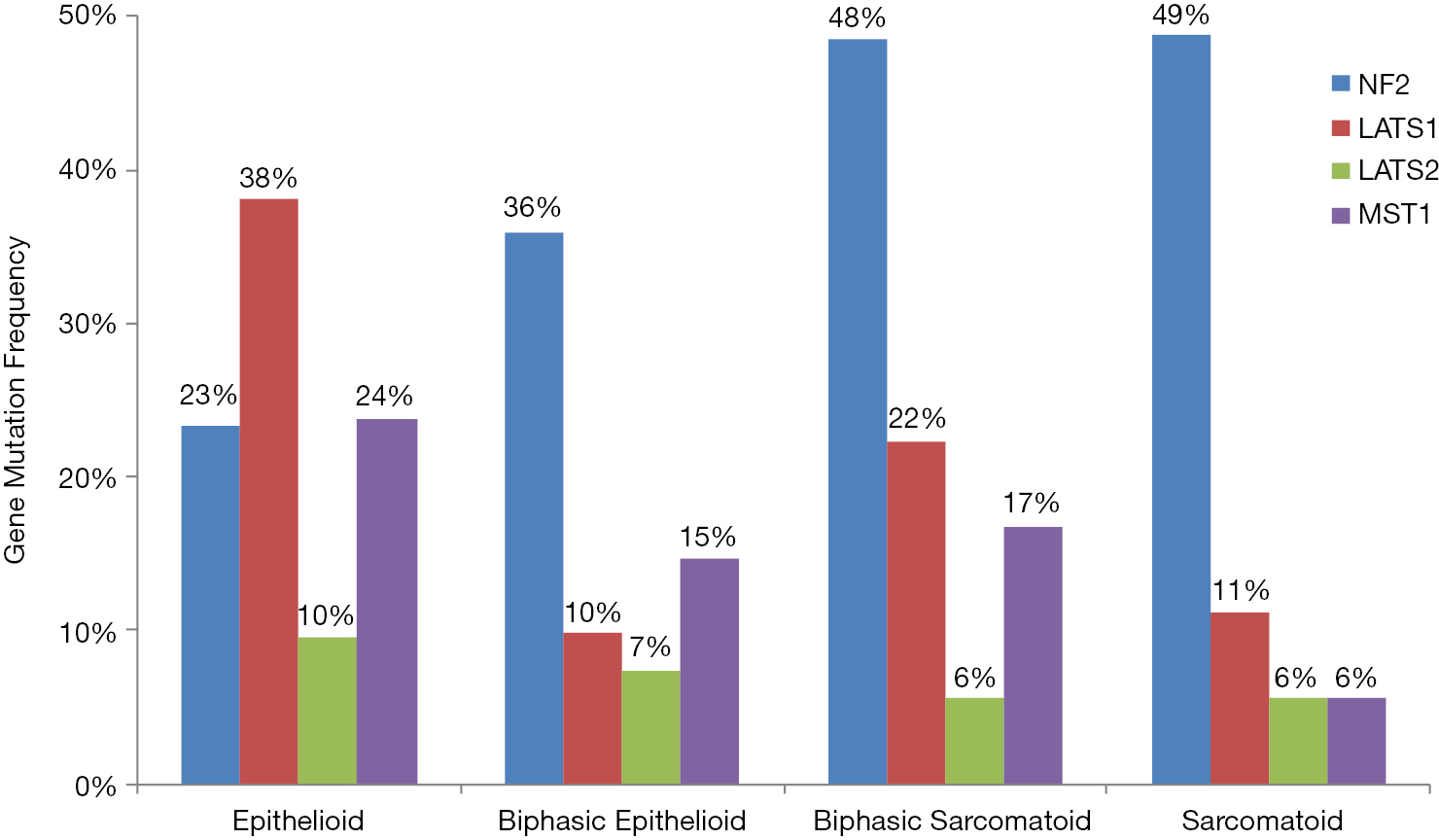 Figure 1 Hippo pathway gene mutation frequency in mesothelioma. Mutations in Hippo pathway genes are shown here by histologic subtype of mesothelioma. More aggressive and poor prognosis sarcomatoid tumors have a higher frequency of NF2 mutations than epithelioid tumors. All subtypes display a high frequency of mutations in genes at some point in the Hippo pathway. Often, though not always, these mutations are mutually exclusive and the combined presence of NF2, LATS1, LATS2, and MST1 mutations accounts for a driving Hippo mutations in a large portion of MPM tumors. Gene mutation here includes mutations, copy number variations and fusions. NF2, Neurofibromatosis 2; MST1, mammalian sterile-20 like kinase 1.

The Hippo pathway controls organ size primarily by regulating cell contact inhibition (17). In normal cells, Merlin, a protein encoded by NF2, and LATS2 contribute to the phosphorylation of the transcription factor Yes-associated protein (YAP) at S127 (18), resulting in YAP ubiquitination and activation of Hippo pathway to control cell proliferation. In MPM tumor cells, inactivation of NF2 and LATS2 prevent the phosphorylation of YAP at S127, which results in YAP relocation from the cytosol to nucleus where it interacts with TEA domain transcription factors (TEAD). In addition, constitutively activation of YAP has been identified in over 70% of primary MPM tumors (12,15,19), and YAP activation leads to Hippo signaling attenuation and transcription of downstream target genes, such as connective tissue growth factor (CTGF) and Cyr61 (17). Low Merlin expression (NF2), results in YAP1 activation, and has been shown to be associated with worse clinical outcomes with shorter times to recurrence and shorter overall survival times in patients with MPM (20). Blocking YAP activation therefore may be an important novel drug target. 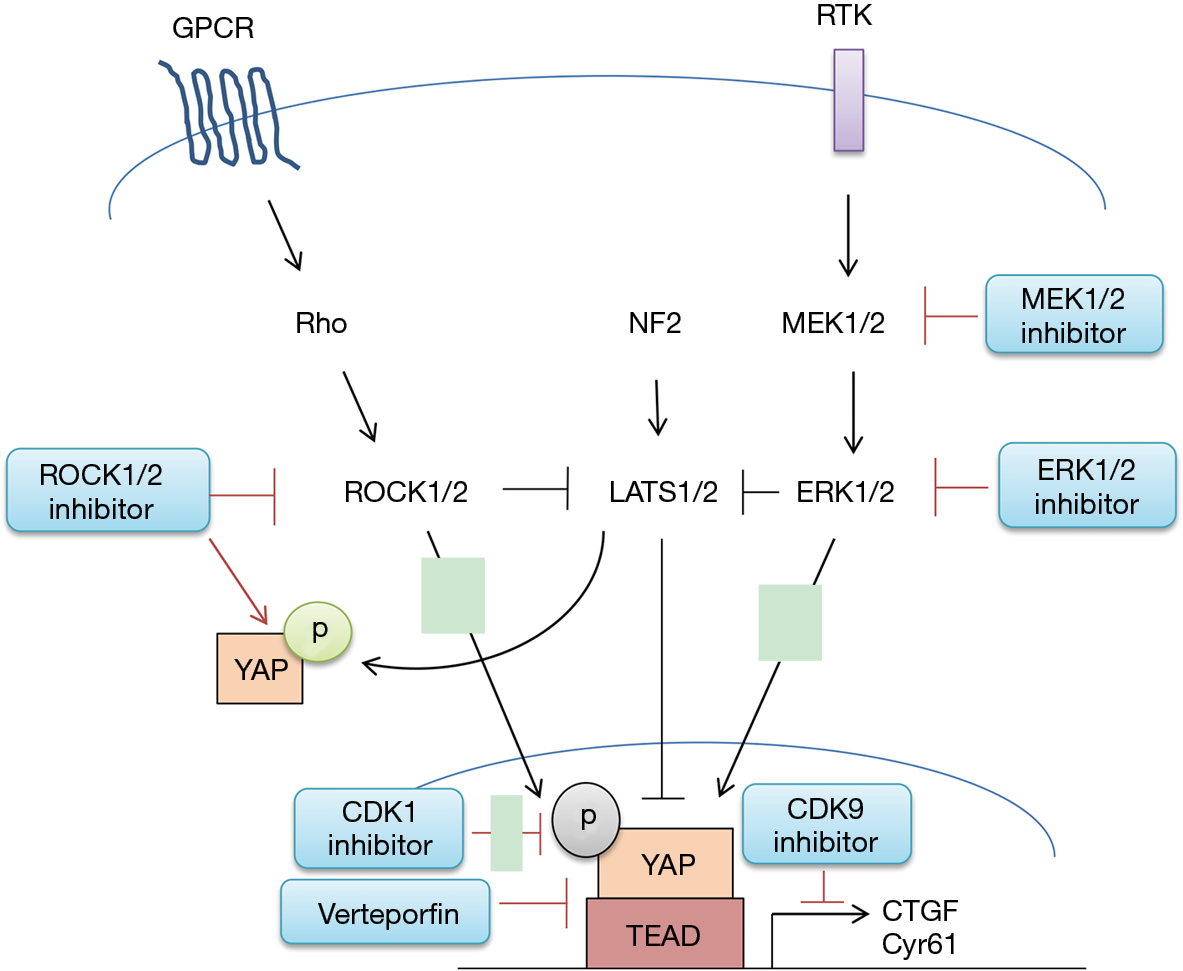 GPCRs function as transducers, by using heterotrimeric G proteins, to activate internal signal transduction pathways in response to specific extracellular signals. There are thousands of tissue specific GPCR heterodimers, that couple to fifteen different Gα proteins. Recent studies have highlighted the capability of GPCR signaling to regulate the inhibition or activation of the Hippo pathway depending on the grouped Gα proteins. For instance, activating Gα12/13 or Gαq11 coupled receptors by serum-borne lysophosphatidic acid (LPA), sphingosine 1-phosphophate (S1P), thrombin and protease-activated receptor (PAR) agonist peptides resulted in inhibition of LATS1/2 kinases and activation of YAP (21-23). Conversely, activating Gαs coupled receptors by adrenaline, glucagon and dihydrexidine turns on the cAMP-dependent protein kinase A (PKA) signaling pathway and promotes LAST1/2 activity, resulted in YAP suppression (24,25). Therapeutic approaches targeting GPCR to attenuate YAP/Hippo pathway in cancers have been evaluated in clinic trials, including S1P-blocking antibody Sphingomab and Phosphatase-resistant LPA analog (26,27). In pre-clinical studies, G protein-coupled β-adrenergic receptor agonist dobutamine has been proposed as anti-cancer treatments (28). In MPM cells, LPA has been shown to stimulate YAP activation and promote cell proliferation (29), and PAR1 expression has been shown to contribute to MPM tumor growth in vivo (30). These studies suggest that targeting GPCR, specifically by activating Gαs or inhibiting Gα12/13 or Gαq11 coupled receptors to suppress YAP could be an effective therapeutic approach in human mesothelioma.

The YAP/Hippo pathway is involved in contact inhibition and mechanotransduction in MPM cells. Cellular components of adherens and tight junctions have been reported to inhibit YAP nuclear accumulation (18,31). It has also been demonstrated that F-actin promotes YAP nuclear translocation and inhibits the Hippo pathway, and that destabilization of F-actin results in the nuclear exportation of YAP (32,33). The clinical use of anti-cytoskeletal therapies has been limited due to toxicity (34). Current therapeutic approaches to target mechanotransduction signals in cancer work through inhibiting Rho-associated kinase (ROCK) signaling (34,35). ROCK inhibition was recently reported to suppress YAP activity in MPM cells harboring LAST2 mutation, suggesting that ROCK could regulate the Hippo pathway through a LATS2-independent mechanism (36). These findings also suggest that targeting ROCK could be an effective therapeutic strategy in MPM.

One way to disrupt YAP transcriptional mechanisms is to block the interaction of YAP to TEAD transcription factors. Two small molecule inhibitors that block the YAP-TEAD interaction were identified from John Hopkins Drug Library by drug screening (42). Both Verteporfin (VP, trade name Visudyne by Novartis) and protoporphyrin IX (PPIX) inhibit the YAP-TEAD complex formation at 10 µM in Co-immunoprecipitation assays (43). VP is a FDA-approved photosensitizer in the photodynamic therapy of neovascular macular degeneration; however, when used as an inhibitor of the YAP-TEAD interaction, light activation is not required (43,44). VP alters YAP conformation when binding to it, and abolished its interaction to TEAD (45). In addition, VP was shown to inhibit the oncogenic activity of YAP in vivo and reduced cell growth and viability in various human malignancies (42,46-48). Moreover, VP treatment has been shown to inhibit cell proliferation, viability, and invasion of MPM cells (36,49).

The interaction of YAP and TEAD recruits a transcriptional mediator complex and promotes elongation of downstream mRNA molecules (54). YAP has been shown to promote acetylation of histones located in enhancers and depletion of YAP reduces recruitment of the mediator complex and promoter-proximal polymerase II levels in cells (54). In addition, phosphorylation of CDK9, a key component of transcription mediators and the elongation complex, promotes transcriptional activation driven by YAP (54). CDK9 inhibitors including flavopiridol, dinaciclib, seliciclib, SNS-032 and RGB-286638 have been evaluated in clinical studies (55,56). It has recently been reported in MPM studies in vitro, that CDK9 inhibition reduces cell proliferation and viability (36).

The Hippo pathway has proven to be of critical importance in MPM. Mutations along this pathway, specifically in NF2 and LATS lead to YAP activation in the majority of MPM tumors. Blocking YAP activity, either via upstream inhibition of one of the several pathways that regulate YAP and Hippo or via direct YAP/TEAD inhibition is an area of active interest. Several novel small molecule YAP inhibitors are in preclinical development with promising results and may enter clinical trials in the near future.