Emergence of a ALK-amplified clone during disease progression in an -rearranged NSCLC patient treated with ALK-inhibitors: a case report

Anaplastic lymphoma kinase (ALK) rearranged disease account for 2–5% of non-small cell lung cancers (NSCLC) and it is an indication to administer ALK tyrosine kinase inhibitors (TKIs) in first and following lines of treatment of advanced stage patients (1). The therapeutic landscape of ALK-positive NSCLC is rapidly evolving thanks to the discovery of different molecules. Crizotinib (first-generation), ceritinib, alectinib, brigatinib (second-generation) and lorlatinib (third-generation) are currently available in clinical practice, while additional inhibitors are in development (e.g., ensartinib, entrectinib, repotrectinib) (2). The use of ALK-TKIs allows long survivals up to 5–7 years (3).

Whether ALK-inhibitors should be used in sequence and which is the best first are open issues in the scientific community (4). The main clinical issue, however, is the expected development of resistance mainly caused by the acquisition of ALK secondary mutations (5,6). ALK gene amplification can also cause resistance (7) as well as different by-pass ALK-independent mechanisms, such as epidermal growth factor receptor (EGFR), KIT, and insulin-like growth factor 1 receptor (IGF-1R) activation (5-8). Here, we present a case of an ALK-positive NSCLC patient treated with ALK-TKIs and progressed to alectinib treatment (Figure 1) via the emergence of a HER2-amplified clone (Figure 2).

A 52-year-old never smoker woman, without a significant medical history, underwent in 2014 to medium-inferior bi-lobectomy for lung adenocarcinoma (Figure 1A). The pathological staging was T3N2, considering two neoplastic nodules in right inferior lobe (Figure 2A,B,C,D) and multiple hilo-subcarinal lymph nodal involvement (Figure 2E,F). In both nodules and in the metastasis, two distinct cell components were observed characterized by a solid and signet ring pattern. Molecular study of the nodules and the metastasis revealed KRAS and EGFR wild-type status. ALK (D5F3, Ventana BenchMark XT, OptiView AMP Kit) immunostaining was positive (Figure 2G,H,I) but fluorescent in situ hybridization (FISH, ALK Break Apart FISH, ABBOTT VYSIS) was negative (Figure 2J,K,L). Spatial variation in staining intensity (Figure 2G,H,I) was observed in all samples that was not caused by a fixation defect as it did not show zonal differences between peripheral (Figure 2M,N,O) and central areas of the tumor (Figure 2G,H,I). Conversely, the ALK staining pattern tended to segregate with the different cytotypes, the signet ring cells being mostly ALK-negative (Figure 2M,N,O).

Despite adjuvant chemotherapy and mediastinum radiotherapy, in January 2016, right pleura, mediastinal lymph node and bone recurrences occurred (Figure 1A,B). Based on the immunohistochemistry (IHC) ALK positivity, the patient received crizotinib treatment and radiotherapy on a L4 bone metastasis (Figure 1A). After 2 months of therapy, an improvement of the pleural involvement with stability of other lesions was observed (Figure 1C). Crizotinib was continued without relevant toxicity until November 2017 when progression in right pleura was observed (Figure 1D). A second-line treatment with alectinib was started with improvement of the pleura and stability at other sites (Figure 1E). In November 2018, after 1-year of alectinib therapy without adverse effects, lung and liver progression occurred (Figure 1F,G). A liver biopsy was obtained to study alectinib resistance. Written informed consent for molecular analysis was collected. The biopsy showed an adenocarcinoma (Figure 2P,Q,R) with homogeneous solid pattern, similar to that observed in the lung primary, but ALK-negative both by IHC and FISH (Figure 2S,T).

DNA was extracted from the liver biopsy and studied by next generation sequencing (NGS) (Solid Tumor Solution, Sophia Genetics, on MiSeq Platform, Illumina, USA). A HER2 gene amplification was observed (Figure 3A), confirmed with FISH analysis (Figure 2U) and digital droplet PCR (ddPCR, Bio-Rad, USA) (Figure 3B); the tumor was HER2-negative by immunostains. Plasma cell-free DNA (cfDNA) collected during ALK-TKI treatment was retrospectively analyzed with ddPCR and HER2-amplified circulating DNA was identified 2 months before clinical disease progression (Figure 3C). HER2 FISH analysis was then retrospectively performed on the primary tumor samples revealing a limited clone with HER2 amplification (Figure 2V,W,X). It was not possible to define the ALK status of these HER2-amplified cells given their small number and negative HER2 immunostains. 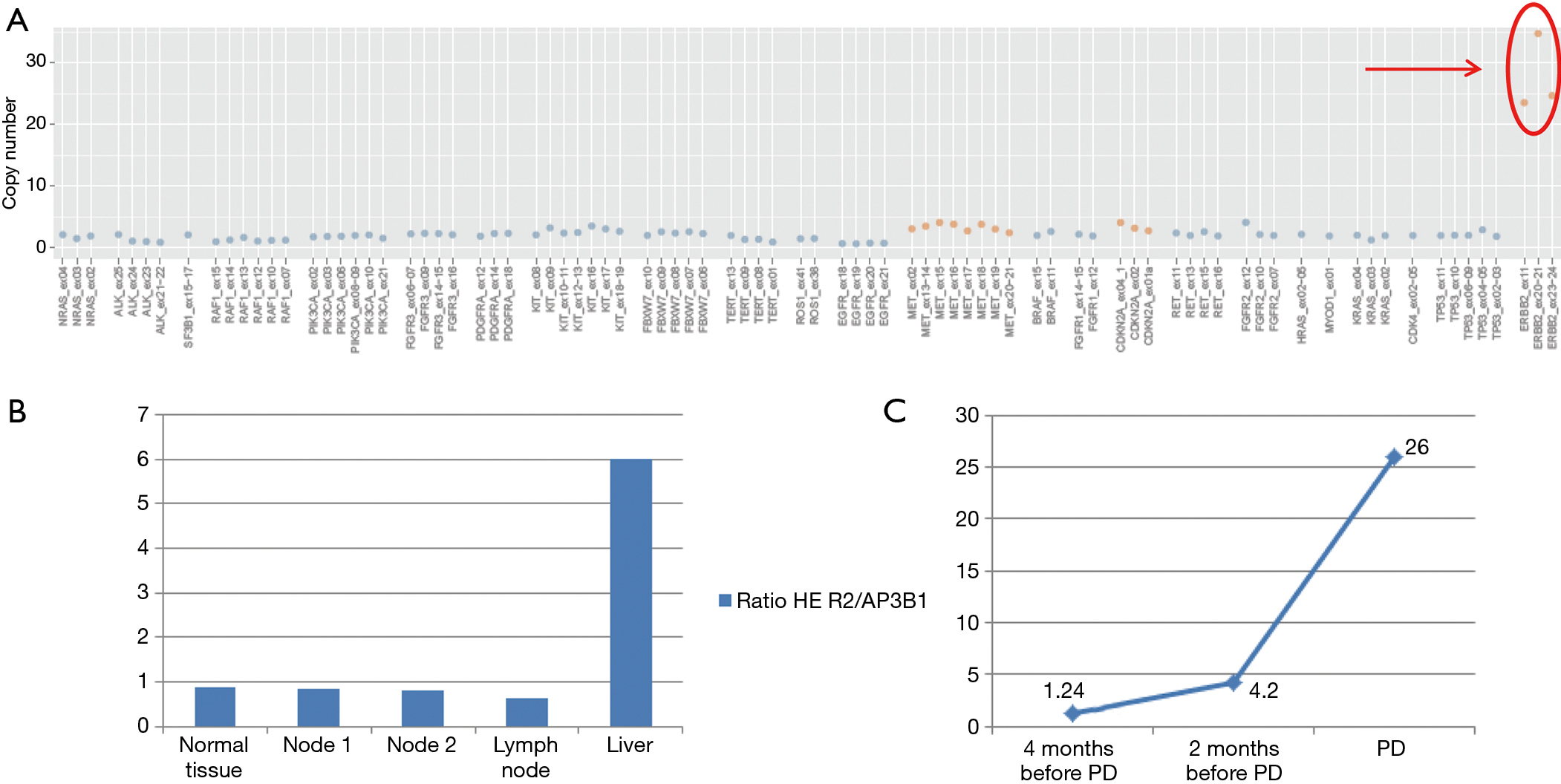 After liver biopsy and discontinuation of alectinib in January 2019, the clinical conditions of the patient rapidly worsened. A treatment with carboplatin-pemetrexed was not feasibly due to the poor performance status. Lorlatinib was started in February 2019 with a temporary clinical improvement (Figure 1A). The patient died in March 2019.

We described a case of an ALK-positive NSCLC patient who developed clinical resistance to ALK-TKI therapy due to the emergence of a HER2-amplified clone. The primary tumor had heterogeneous histology, non-homogeneous ALK immunoreactivity and it was negative for ALK gene rearrangements by FISH. It harbored a minor HER2-amplified clone selected by ALK-TKI therapy to become the dominant component upon disease progression.

Most studies consistently report that ALK status, as assessed by IHC and FISH, is stable in primary NSCLC and its metastasis (9-11). However, at the cellular level, there is evidence of a significant intra-tumor heterogeneity of ALK expression that may underlie biological and clinical diversity (12). In the present case, the primary tumor was characterized by zonal variation in ALK immunostaining that in part segregated with different cell types, and it showed discordance between ALK IHC and FISH status in all samples. IHC and FISH discordance can occur, nonetheless, IHC positive/FISH negative NSCLCs have a high probability of response to ALK-inhibitors (13), as confirmed in present case. The patient, in fact, underwent first- and second-line ALK-TKI therapy with clinical benefit but, ultimately, she progressed. Biopsy of a liver metastasis showed an ALK-negative, histologically monomorphous tumor with diffuse HER2 gene amplification, as assessed by NGS sequencing and FISH. The emergence of this HER2-amplified clone could be traced 2 months earlier than the development of clinical resistance by the analysis of circulating tumor DNA with ddPCR. When retrospectively studied by FISH, both primary lung nodules and lymph node metastasis showed rare HER2-amplified cells (Figure 2V,W,X). Based on all these evidences, we conclude that the ALK-negative/HER2-amplified disease observed at progression derived from the selective pressure exerted by ALK-TKI therapy on a heterogeneous tumor harboring a primary resistant minor clone. The persistence and emergence of the resistant clone under sequential crizotinib and alectinib treatments suggests that HER2 amplification might cause resistance to both drugs.

To the best of our knowledge, this is the first report of HER2 gene amplification as a resistance mechanism to ALK-TKIs, both first- and second-generation. HER2 is known to cause resistance in EGFR-mutated patients treated with different generation of EGFR-TKIs (14,15). There is also limited evidence that it might be involved in resistance of ALK-positive NSCLC, evidence deriving from a preclinical study (16) and the analysis of a single case with several concomitant oncogenic drivers (17). Future treatment strategies of ALK-addicted NSCLC might benefit from a combined inhibition of both ALK and HER2 to minimize the development of resistance.

Ethical Statement: The authors are accountable for all aspects of the work in ensuring that questions related to the accuracy or integrity of any part of the work are appropriately investigated and resolved. The study was conducted in accordance with the Declaration of Helsinki (as revised in 2013). Written informed consent was obtained from the patient for publication of this case report and any accompanying images.