Non-small cell lung cancer (NSCLC) is the most prevalent pathological type of lung cancer (1-4). Cancer patients often experience depression and anxiety, which have negative effects on the quality of life and medical treatment of patients (5-11). Moreover, these psychological problems are not only concomitant conditions but also risk factors for cancer occurrence (12). Many cancer patients experience depressive and anxious symptoms meeting established criterion for major depression disorder and anxiety diagnosis, which can change the course of disease of patients with newly diagnosed cancer (13). In addition, abnormal brain structure and function were identified in patients with psychological distress by previous neuroimaging studies (14-16). Therefore, we assess anxious and depressive symptoms of NSCLC patients.

A specified group of brain regions exhibit abnormal functional brain activity and brain structural abnormalities in depressive and anxious patients, which are implicated in the affective processing and emotional regulation (17-23). The impaired brain regions are components of frontolimbic network including prefrontal cortex, temporal cortex, cingulate cortex, insula and thalamus (24). Under-activation of prefrontal regions are found in depressed subjects especially during the induction of negative affect, while both positive and negative emotional stimuli can induce the activation of prefrontal cortex in healthy controls (25-27). Moreover, the functional or structural abnormalities of prefrontal regions may lead to secondary effects on the function of subcortical brain regions (such as putamen and thalamus) and limbic cortex (hippocampus, amygdala and other temporal regions), which are associated with the abnormal appraisal of negative stimuli (28,29).

Although previous research has found functional and structural changes in patients with lung cancer, topological properties damage of the whole brain structural networks associated with cancer patients before chemotherapy are still less clear. Moreover, how these brain areas interact during tumorigenesis and whether these brain areas are coordinated with other particular brain regions involved in the process of emotion remain unclear. The graph theoretical analysis used in our study can overcome the limitations of seed-based approaches used in previous neuroimaging studies and can provide a unique framework for measuring topological characteristics of the brain networks.

This is the first study to document brain structural network changes in a cohort of NSCLC patients before chemotherapy. Based on previous research, we aimed to examine the emotions and topological characteristics of brain white matter network in newly diagnosed non-nervous system metastatic NSCLC patients prior to chemotherapy by the method of graph-theoretic analysis. Since previous neuroimaging studies have demonstrated that the brain function and structure were disrupted in the lung cancer patients after chemotherapy, we hypothesized the cancer may also have effects on the brain network of NSCLC patients.

We present the following article in accordance with the STROBE Reporting Checklist (available at http://dx.doi.org/10.21037/tlcr-20-273).

Twenty-four patients with non-nervous system metastatic (identified by structural MRI) NSCLC prior to chemotherapy and 25 gender-, age- and education-matched healthy controls (HC) volunteered in the current study. Patients prior to chemotherapy were recruited from the inpatients at Jiangsu Cancer Hospital after a histologic diagnosis of NSCLC. All participants were aged 18 to 70 years old, right-handed and the years of education are more than 9 years. This study was approved by the ethical commission of the Affiliated Cancer Hospital of Nanjing Medical University (No. ZM201923), conducted in accordance with the Declaration of Helsinki (as revised in 2013). Additionally, written informed consents were obtained from all participants. A summary for the detailed demographic and clinical characteristics of all participants were presented in Table 1.

Table 1 Demographic and clinical characteristics of all subjects
Full table

In addition, the tractography of white matter was conducted using the diffusion toolkit (http://trackvis.org/dtk/). The streamline was propagated using Fiber Assignment by Continuous Tracking (FACT) algorithm.

The whole-brain was parcellated 90 cortical and subcortical regions by the automated anatomical labeling (AAL) template (39). The regions were defined as nodes of the brain network. Additionally, anatomical connections between regions made up edges of the graph. More details about the procedures can be found in previous studies (40,41).

In the present study, two-sample t-test was used to compare the age, education and emotional scores, while chi-square test was used to compare the gender of NSCLC patients and HC. In addition, we performed two-sample t-test to compare the differences of the measures of brain networks between NSCLC patients and HC. The method of false discovery rate (FDR) was used to adjust the multiple comparisons. Moreover, the associations between the altered measures of brain regions and the scores of HAMD-17 and HAMA were assessed by the method of Pearson correlation. The significance level was set at P<0.05.

Increased scores of HAMD-17 and HAMA of NSCLC

Small-world properties of brain networks in both NSCLC and HC 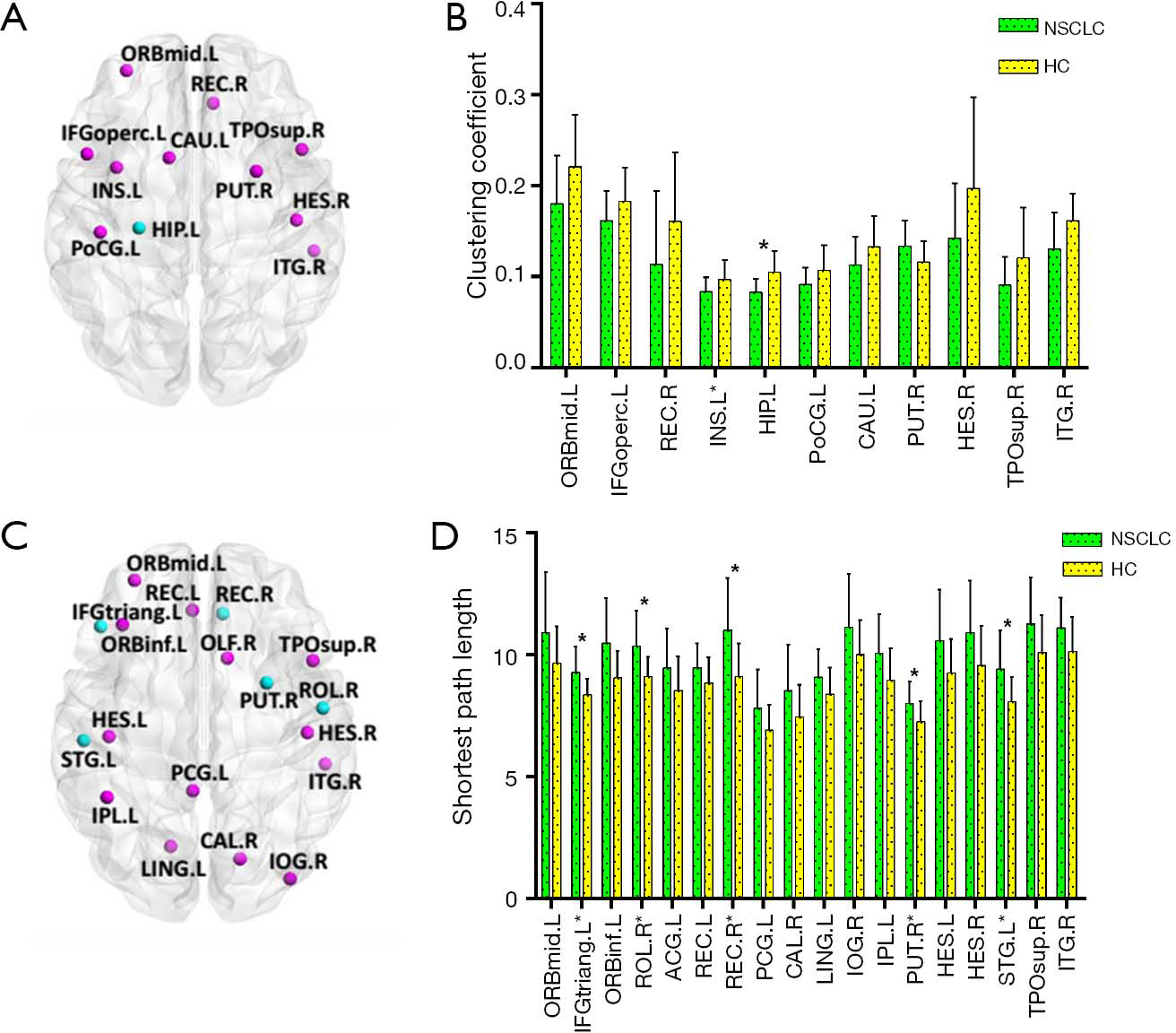 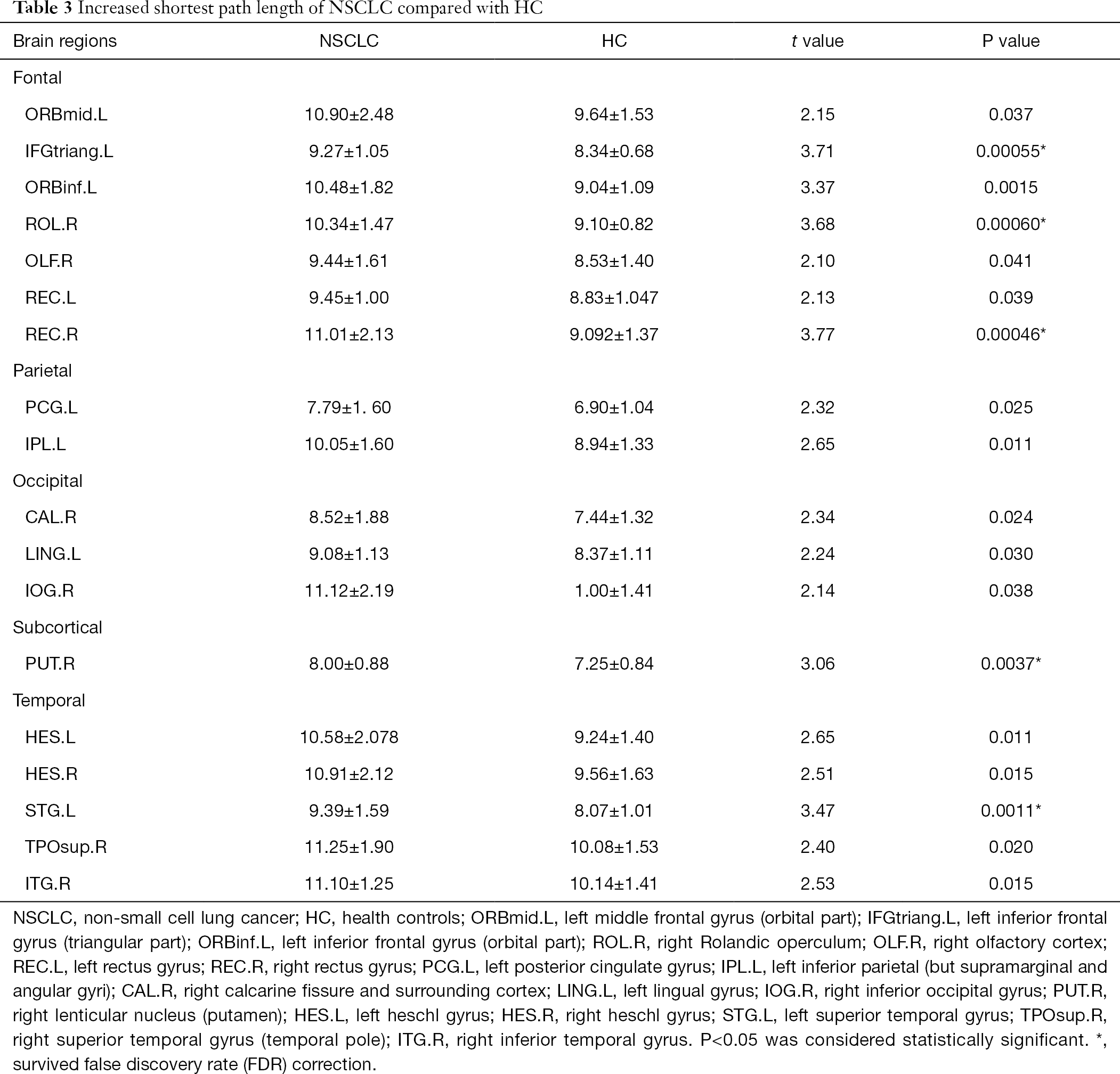 Associations between altered measures and scores of HAMD-17 and HAMA

For all the impaired measures of the brain network of NSCLC patients, there were correlations were found between the measures and scores of HAMD-17 and HAMA (Table 4). 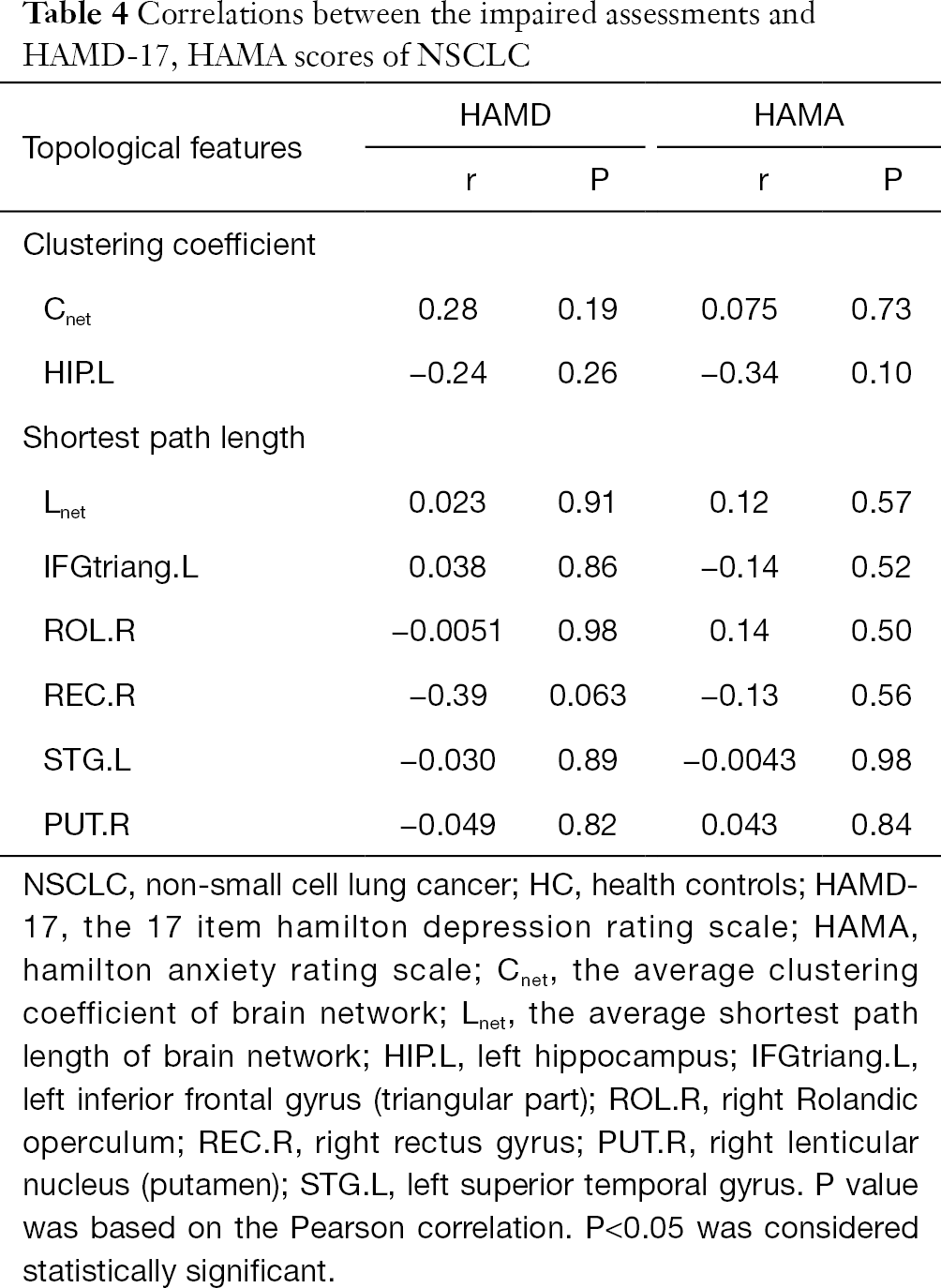 This study investigated the emotions and small-world properties of brain structural networks in non-nervous system metastatic NSCLC patients prior to chemotherapy. We found that NSCLC patients had emotional distress including depression and anxiety. In addition, brain networks exhibited economical small-world topology in both NSCLC patients and HC groups. However, reduced clustering coefficient and increased shortest path length were found in the brain of NSCLC patients. The results revealed that nodal measures were profoundly affected at several regions of prefrontal, temporal and subcortical brain regions, which were considered to be involved in the process and regulation of emotion. These findings indicated that widely distributed structural brain networks were altered in treatment-naïve NSCLC patients with abnormal emotion, thus providing further evidences for the pathological neuromechanisms associated with cancer.

Previous neuroimaging studies have demonstrated that human brain networks have small-world configuration (41,43,44). We also observed that treatment-naïve NSCLC patients had small-world architecture in the white matter brain networks, which provided further supports for the opinion that the small-world property had the ability of displaying tolerance to the brain diseases. The brain networks with small-world features often have higher clustering coefficient (high efficiency of parallel information transfer) and lower shortest path length (low cost) when compared with random networks (40,41). Therefore, the brain networks have economical properties with maximized cost efficiency of parallel information processing, consistent with previous functional and structural MRI studies (41,42).

Although NSCLC patients had economical small-world properties, reduced clustering coefficient and increased shortest path length were found in NSCLC group when compared to HC group. The global efficiency of information processing is often affected by the long range path lengths in the brain network (40). The reduced clustering coefficient and increased shortest path length of NSCLC patients suggested a tendency of decreased local and global efficiency of the brain networks (40). In addition, the decreased clustering coefficient indicated the lower level of fault tolerance of the brain networks during external attacks (41). We thus suspected that the lower values of global and local efficiency might be related to the depressive and anxious emotion of NSCLC patients.

Abnormal nodal measures were found in several brain regions, involving the left middle frontal gyrus (orbital part), superior temporal gyrus, hippocampus and right Rolandic operculum, rectus gyrus, lenticular nucleus (putamen). The prefrontal cortex is associated with the emotional regulation of human (21,45). Previous neuroimaging studies have found that depressive and anxious emotion is associated with the dysfunction and structural abnormalities of prefrontal cortex in depression and anxiety (21,46). The reduced clustering coefficient and increased shortest path length in the prefrontal regions suggested the abnormalities of emotional regulation in NSCLC patients prior to chemotherapy. In addition, several regions belonging to temporal and subcortical cortices were also found to have aberrant topological properties, which might also be associated with the cancer-related depression and anxiety of NSCLC patients.

In summary, this study reveals abnormal emotion and impaired topological properties of brain structural networks in non-nervous system metastatic NSCLC patients prior to chemotherapy using the method of graph-theoretic analysis. Our results provide further supports for the cancer-induced depression and anxiety of NSCLC patients, which may be associated with the abnormal topological properties of the prefrontal, temporal and subcortical brain regions. These findings enhance our understanding of the underlying pathophysiology of cancer-related negative emotion of NSCLC patients.

Funding: The work was supported by the grants of: National Natural Science Foundation of China (No. 81871873), Jiangsu Provincial Key Medical Discipline (No. ZDXKA2016009), Foundation of Jiangsu Cancer Hospital (No. ZM201923).

Conflicts of Interest: All authors have completed the ICMJE uniform disclosure form (available at http://dx.doi.org/10.21037/tlcr-20-273). The authors have no conflicts of interest to declare.

Ethical Statement: The authors are accountable for all aspects of the work in ensuring that questions related to the accuracy or integrity of any part of the work are appropriately investigated and resolved. This study was approved by the ethical commission of the Affiliated Cancer Hospital of Nanjing Medical University (No. ZM201923), conducted in accordance with the Declaration of Helsinki (as revised in 2013). Additionally, written informed consents were obtained from all participants.