Lung cancer is the leading cause of cancer-related deaths in the worldwide for both male and female (1). The discovery of epidermal growth factor receptor (EGFR) mutation as oncogenic driver and predictor for sensitivity of tyrosine kinase inhibitors (TKIs) rather than chemotherapy has changed the clinical practice in patients with classical-EGFR mutant advanced non-small-cell lung cancer (NSCLC) (2,3). The EGFR exon 20 insertion (ex20ins) mutation is the most common mutation in non-classical EGFR mutations, accounting for about 1.5% to 2.5% of all lung cancers, and about 10% (1–17%) of all EGFR mutations (4,5). Most of these mutations are typically located near or after the C-helix of tyrosine kinase domain of EGFR ranging from M766 residues to C775, and a small portion in the middle of the C-helix (E762 to Y764) (4,5). Patients with EGFR ex20ins have similar clinical features to those with classical EGFR mutations but a worse prognosis (6). EGFR ex20ins could change the binding conformation between the first and second generations of TKIs and the active TK domain which associated with primary resistance to TKIs (5,7). Therefore, most of patients harboring EGFR ex20ins mutations could barely benefit from EGFR-TKIs therapy except for A763_Y764insFQEA (5,8,9).

In this study, we launched a large retrospective nation-wide study of the clinical characteristics and outcomes in advanced NSCLC patients with EGFR ex20ins to explore the performance of pemetrexed-based chemotherapy.

We present the following article in accordance with the STROBE reporting checklist (available at http://dx.doi.org/10.21037/tlcr-20-382).

We conducted a multicenter, retrospective study involving several medical centers in many different areas, including the southern, northern, eastern, and western parts of China between 2013 and 2018. The genetic alterations results obtained from 9,142 plasma or tissue samples of NSCLC patients who underwent the next-generation sequencing (NGS) detection for EGFR mutation screening. A total of 119 advanced NSCLC patients with EGFR ex20ins met the enrollment criteria and were further analyzed in this study (Figure 1). The lung tumor histology was classified according to the World Health Organization criteria (2015 version) (12). Lung cancer clinical staging was performed in all patients according to the 8th TNM classification (13). Response to treatment was assessed according to Response Criteria in Solid Tumors (RECIST) 1.1 (14). All procedures performed in this study were in accordance with the Declaration of Helsinki (as revised in 2013) and the study was approved by the Drum Tower Hospital, Medical School of Nanjing University Ethics Committee (No. 2019-004) and written informed consent was taken from all the patients. 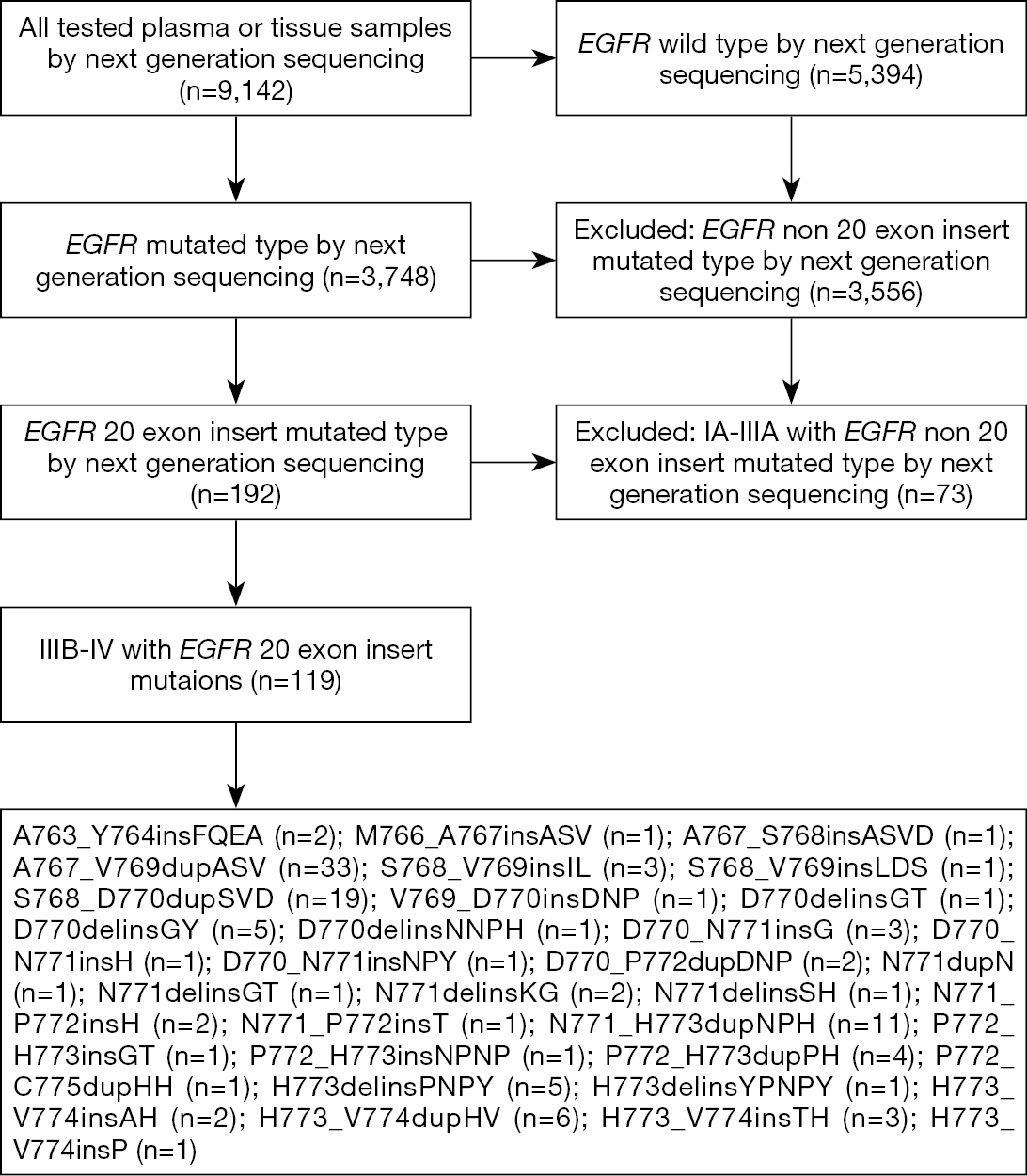 Kaplan-Meier method was adopted to estimate and plot the survival endpoints for progression-free survival (PFS) and overall survival (OS) in this study. The Cox proportional hazards regression model was used to evaluate the impact of selected variables on OS. The differences were accessed by the two-sided P values with a significance level of 0.05. All analyses were performed using R statistics package (R version 3.4.0; R: The R-Project for Statistical Computing, Vienna, Austria).

Characteristics of patients with EGFR ex20ins

A total of 119 patients with advanced NSCLC and EGFR ex20ins were enrolled in this study. There were 83 males and 36 females, with a median age of 59 (range, 35–83) years. The number ever and never smokers were 59 and 60, respectively. Eleven patients were stage IIIB and 108 were stage IV according to the 8th TNM classification (13). Thirty-two patients had brain metastases before treatment and 46 patients had bone metastases before treatment. All patients have ever received chemotherapy and 11 of them have received EGFR-TKIs treatment. Four patients received osimertinib and seven patients received icotinib as second-line or further treatment. The characteristics of patients are listed in Table 1. 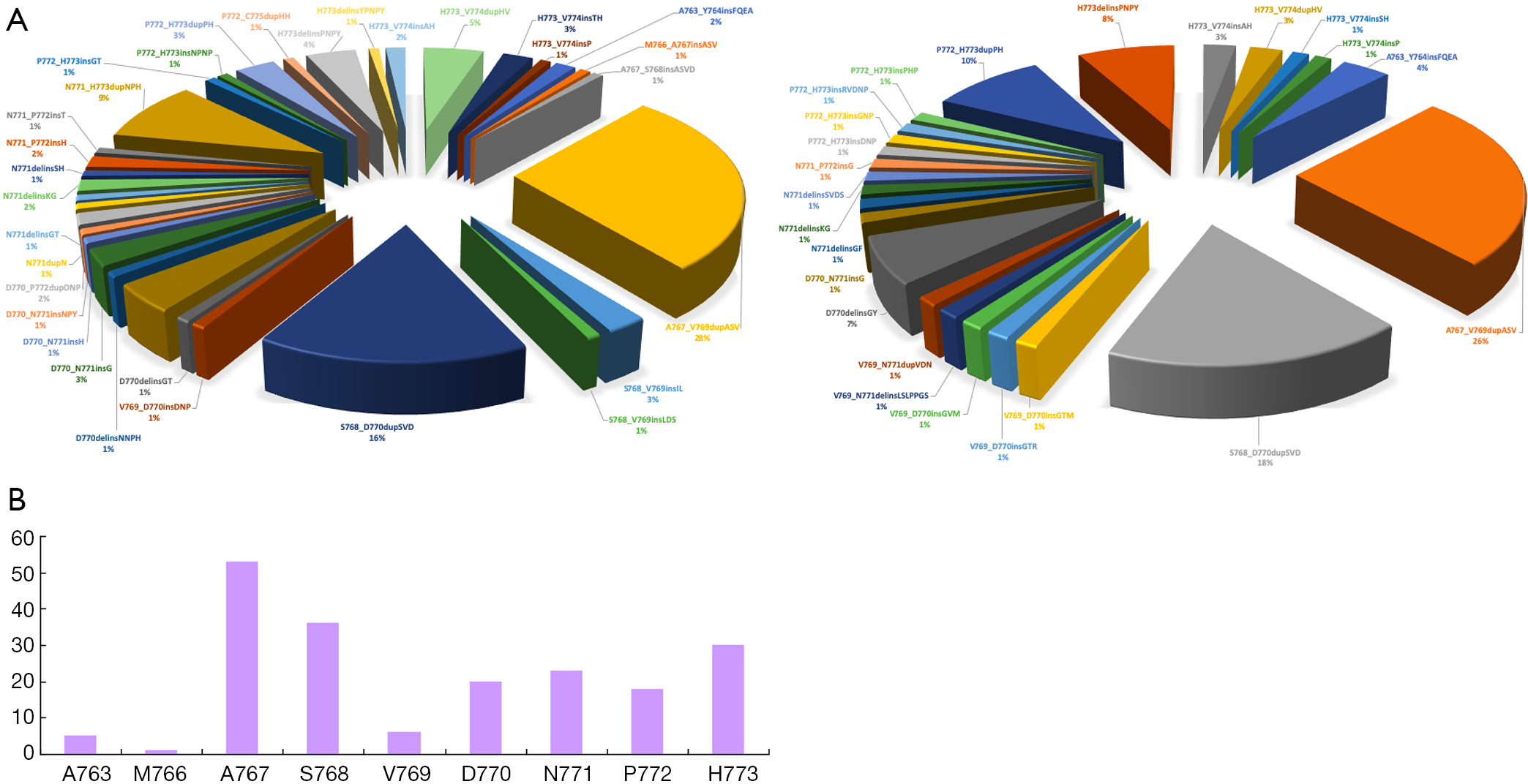 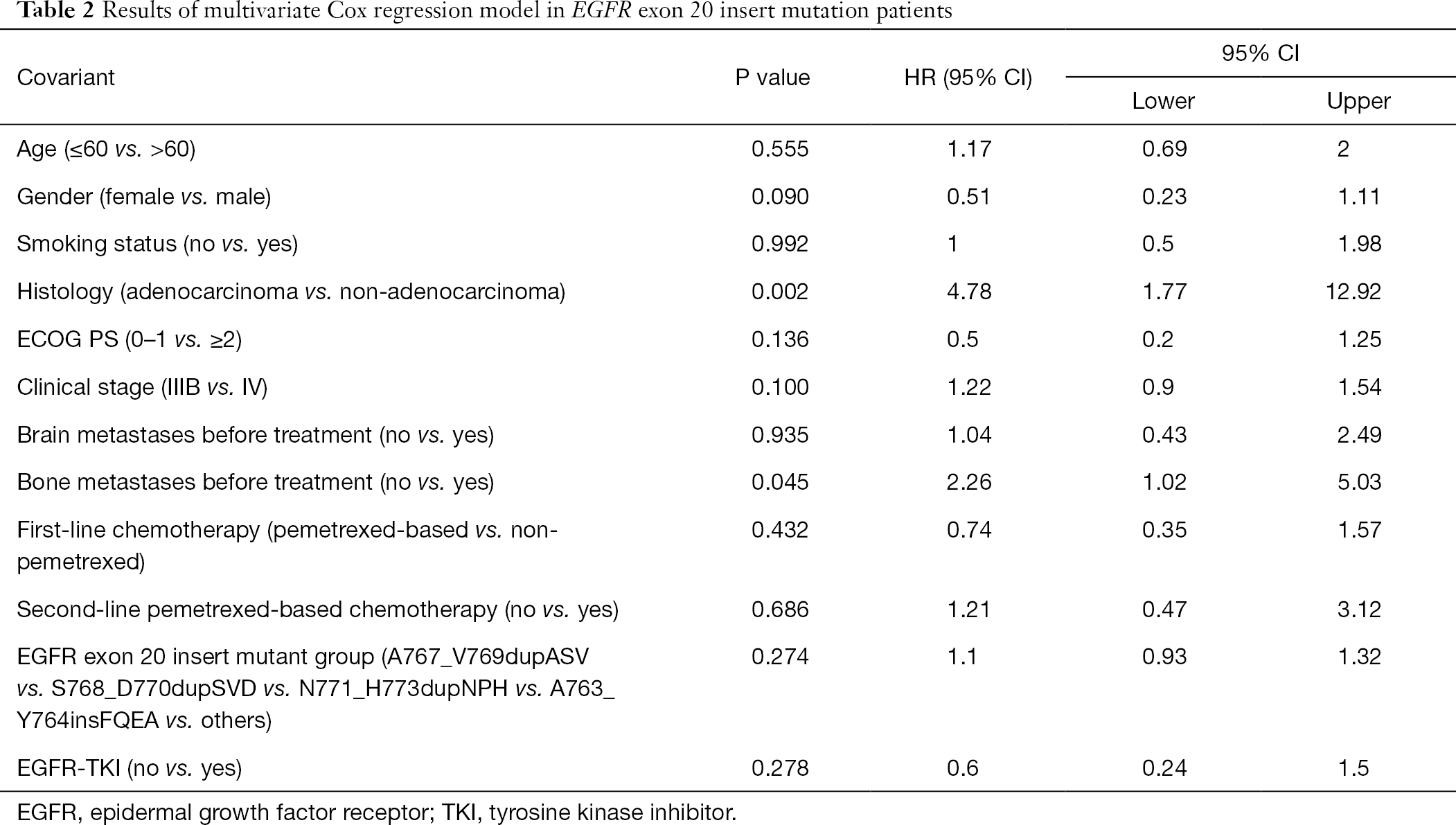 Chemotherapy remains to be the standard first-line therapy for NSCLC patients with EGFR exon20ins since most of them have a poor response to TKIs (10). Pemetrexed is a multitargeted antifolate and it could be used as monotherapy or combination with platinum in first or subsequent lines or maintenance option in advanced non-squamous NSCLC patients (21,22). In Wu et al.’s study, pemetrexed-based therapies were observed to have better PFS (6.2 vs. 2.7 months; P<0.001) and OS (28.0 vs. 15.4 months; P=0.009) than other regimens without pemetrexed (17). Their conclusion was very close to ours. Although A763_Y764insFQEA mutant was one exception that has been identified as indicators for TKI-sensitive EGFR exon20ins mutant in literature (9,10,23), little is known about the efficacy of chemotherapy in this subpopulation. Lin et al. (24) reported clinical outcome of six advanced NSCLC patients with A763_Y764insFQEA, one of them received first-line pemetrexed + cisplatin harvested the best response to PR and 28 months of PFS and >57.0 months of OS; while another patient received gemcitabine + cisplatin reached SD as best response and the PFS and OS were only 7.0 and 17.0 months, respectively. Both of A763_Y764insFQEA carriers in our study had accepted icotinib during follow-up, and they had PFS less than 6.0 months after first-line chemotherapy but longer than 2 years OS. The association between different subtypes of EGFR exon20ins and efficacy of chemotherapy still needs to be determined in the future, especially in those target therapy-resistant subtypes.

Despite general poor response to targeted therapy in patients with EGFR ex20ins, comparable OS after systemic chemotherapy was reported in all patients with EGFR‐mutant lung adenocarcinomas previously (26 vs. 31 months, P=0.53) (10). Herein, we aimed not only to present the superior efficacy of pemetrexed-based chemotherapy than non-pemetrexed-based chemotherapy in the first-line setting of EGFR exon20ins carriers but also claim a needy of more effective targeted therapies for those who could not benefit from chemotherapy and approved target therapies.

There are two major limitations should be noticed. Firstly, this is a retrospective study and we enrolled patients with late stages of NSCLC only that the bias of patient selection could not be neglected. Giving the low incidence and complex variants of EGFR ex20ins, we presented the largest study of advanced NSCLC patients with EGFR ex20ins from the nation-wide genetic-screening database as far as we know. Secondly, we have not collected all the treatment information after second-line chemotherapy which could influence the outcome of patients with EGFR ex20ins. However, more than two-thirds of patients have received pemetrexed-based chemotherapy and achieved significant survival benefits compared with other chemotherapy which has not been reported in the Chinese population before. Optimizing chemotherapy could be meaningful to those TKIs-resistant population.

To the best of our knowledge, it is the largest cohort study of advanced NSCLC patients with EGFR ex20ins from China. Pemetrexed-based treatment could have better control of disease than non-pemetrexed-based chemotherapies in this population. Furthermore, more novel and effective agents are expected to ice-break the limitation of survival benefit from toxic chemotherapy.

Reporting Checklist: The authors have completed the STROBE reporting checklist. Available at http://dx.doi.org/10.21037/tlcr-20-382

Conflicts of Interest: All authors have completed the ICMJE uniform disclosure form (available at http://dx.doi.org/10.21037/tlcr-20-382). The authors have no conflicts of interest to declare.

Ethical Statement: The authors are accountable for all aspects of the work in ensuring that questions related to the accuracy or integrity of any part of the work are appropriately investigated and resolved. All procedures performed in this study were in accordance with the Declaration of Helsinki (as revised in 2013) and the study was approved by the Drum Tower Hospital, Medical School of Nanjing University Ethics Committee (No. 2019-004) and written informed consent was taken from all the patients.